Here are the Miss Universe 2010 videos (in High Quality)!

For those who may have missed the 2010 Miss Universe Pageant (or who may still want to make repeat viewings of the same, I have taken the liberty of compiling all the segmented videos in high quality. All of them are courtesy of Julian89Tube. Enjoy!

Was Venus given a really tough question? ABC News gave a good insight on her ‘major, major’ answer…

Right after the Miss Universe 2010 finals, the 5th placer is even outshining the winner with the answer she gave to the final question.

Venus Raj has suddenly out-twitted and out-trended Jimena Navarrete that even ABC News covered her “miss-perfect” reply to William Baldwin’s question in the Top 5 – “What is one big mistake that you’ve made in your life and what did you do to make it right?”

The video above only proves how difficult answering the question is when you’re in front of a live audience in a show beamed worldwide, let alone answering the same in the middle of a one-on-one interview.

But if I were Venus, this is how I would answer the same…
“ In my 22 years of existence, I am actually committing that big mistake right now by not using a Tagalog interpreter since English is only my second language – my third even since Bikolano and Tagalog take first and second. But having someone translate my answer would only waste the precious little time I have left to give a reply. I’m just happy that I’m sending across my message loud and clear.” 🙂

Anyways, here is a video message of Venus Raj to all her fans and supporters around the world…

Ok….that wraps up my blog coverage of Miss Universe 2010! Thank you for giving my blog its’ biggest number of daily hits last August 24, 2010. I hope you, my dear readers, enjoyed the ride with me! 😉

And so begins the charmed life of a Miss Universe winner… 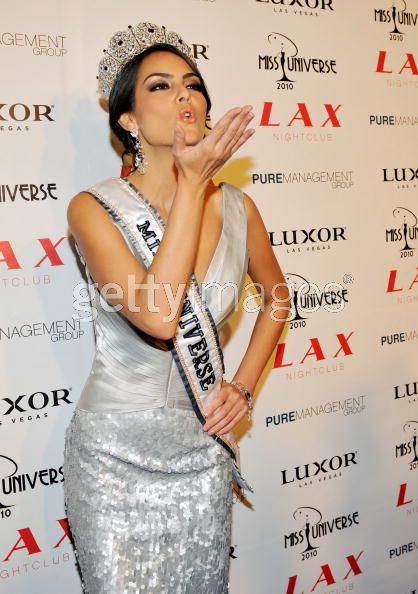 When Venus glided on the ramp for the Top 15 swimsuit competition, everyone knew that she would be a shoo-in for the next round. (Photo credit:Getty Images)

Venus (3rd from left) proudly standing with the 9 other ladies who made the cut after the swimsuit round. (Photo credit: Getty Images)

Next came the evening gown competition for the Top 10 where Venus elegantly presented her silver gown. She wound up 5th and got the last ticket to the Top 5. (Photo credit: Getty Images)

When Venus was called as one of the Top 5, tension was mounting inside her. She claims to be the type of person who gets more nervous when she thinks to herself that she will indeed get nervous in being interviewed onstage. And this one is truly a 'major major' thing for her. (Photo credit: Getty Images) 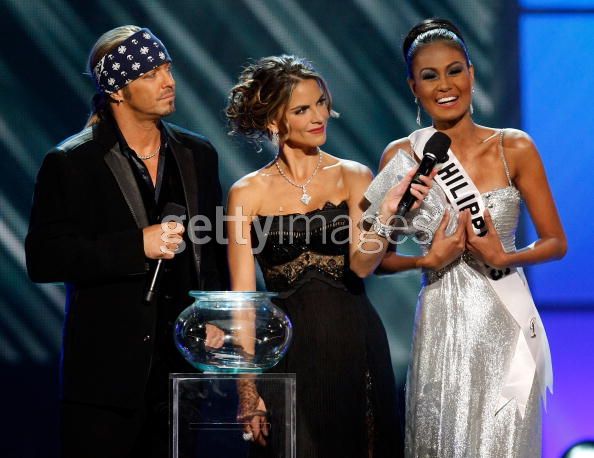 And nervous she got. During the final question, she admitted that she was already at a loss for quality words to relate. She did her best despite the tremendous pressure boiling inside her. And this image gave birth to the Philippines’ latest catchphrase: “major major” 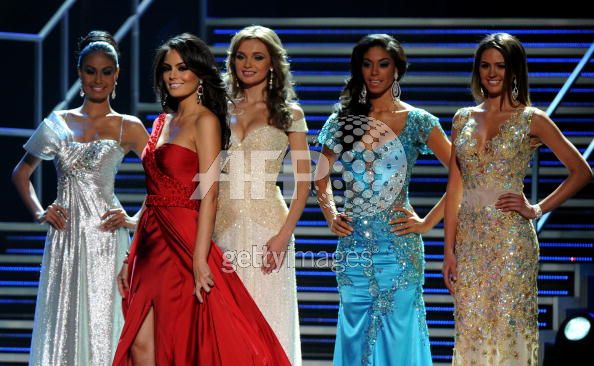 After the final question, Venus could only watch the opportunity of winning the crown slip away from her grasp. Mexico's Jimena Navarrete stamped her cool demeanor and tight grip on the judges' attention. (Photo credit: Getty Images) 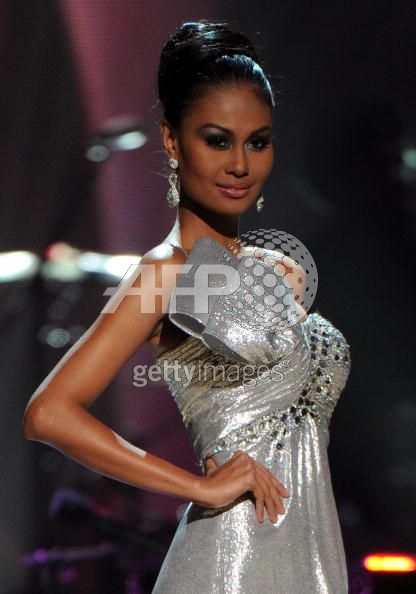 In the end, Venus still made the whole Philippine nation and all Pinoys around the world proud of her achievement. Her 4th Runner-Up finish ended the drought of placements in the Miss Universe Pageant. And for this, a 'major major' thank you is in order! (Photo credit: Getty Images) 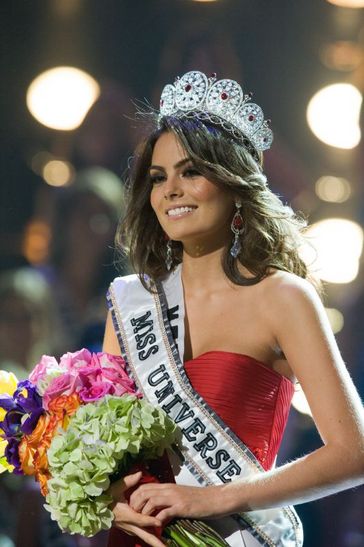 Congratulations to the Top 5! And to Venus, you made the Philippines proud with your achievement! Mabuhay ka! 😉

Global Beauties released its final leaderboard for Miss Universe 2010 going into the finals of the pageant in just a few hours.

They have Miss Ireland, Rozanna Purcell, as their top pick with Ximena Navarrete of Mexico, Venus Raj of the Philippines, Irina Antonenko of Russia and LaToya Woods of Trinidad & Tobago completing the Top 5.

Interestingly, they specified a separate group of girls tagged as members of Trump Class and which include the ladies from Canada, Slovak Republic, Great Britain, Romania and Poland. We all know how Donald Trump is enamored by ladies from Central Europe and those with descent from the same.

Let’s see how their list compares to the actual results.

I read this online article by Joe Freda from SBRForum.com about Miss Universe betting. Read and share your thoughts. 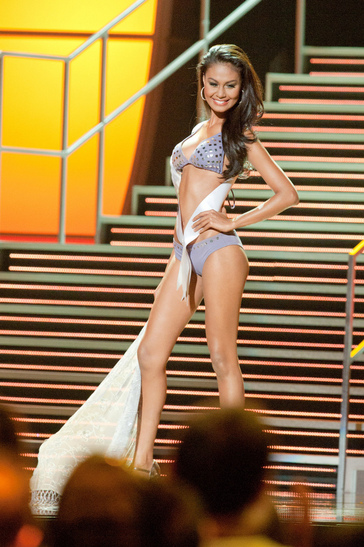 Miss Venezuela has walked away with the past two Miss Universe tiaras, but Venus Raj of the Phillipines is the betting favorite to halt that streak on Monday night.

Monday evening’s 59th edition of Miss Universe takes place at Mandalay Bay Events Center in Las Vegas, with 83 ladies from around the globe vying for the pageant’s crown. Last year’s victor, Stefania Fernandez, made it two straight titles for Venezuela, but a highly-competitive field has oddsmakers not favoring a three-peat for the “Land of Grace.”

Two of Ireland’s sports books, Boylesports and Paddy Power, were among the first to open odds on Monday’s contest, with both making Miss Philippines, Venus Raj, the initial favorite. Boylesports presently lists the 22-year-old at 5/1, while Paddy Power is currently offering 6/1.

BetUS has slightly disagreed with the Irish betting shops, posting Miss Mexico, Jimena Navarrete, as a 7/1 favorite. Navarrete, who is studying nutrition while working as a model, would be the first Miss Universe winner from Mexico since 1991, when Lupita Jones was victorious.

Miss Colombia, Natalia Navarro, has been a top-five choice on several boards, with odds ranging from 9/1 to 13/1. Navarro, who is presently studying Finance at Florida International University, scored nearly perfect numbers in her nation’s swimsuit (9.9) and evening gown (9.8) competitions.

Pinnacle Sports is presently offering 1/5 odds on a “field” wager, which would cash if anyone other than Raj, Navarrete, or Navarro are victorious. Raj and Navarrete began as the Curacao shop’s top two choices, with Navarrete notably dropping from Tuesday’s initial odds of 23/2 to 9/1.

Las Vegas will be home turf for Miss USA, Rima Fakih, who won her present title, three months ago, in “Sin City.” The Lebanon native, representing Michigan, surprisingly edged out the more-favored Miss Oklahoma, Morgan Woolard, when both were among the contest’s top-five finalists.

Fakih is presently a 15/2 choice at BetUS to become the USA’s eighth Miss Universe winner, extending the nation’s record number of seven crowns. The USA has also had the most finalists with 27, followed closely by Venezuela, who has had 23.

Eight of the pageant’s nine telecast judges are USA natives, which could give an even further edge to Fakih. The sole exception is English-born actress Jane Seymour, who lives in California.

Seymour is joined by actors Chazz Palminteri and William Baldwin on the panel, with Baldwin’s wife, Chynna Phillips, also included. Phillips is one of three musicians present, with Sheila E. and Criss Angel rounding out that trio.

Monday’s event will be televised by NBC and Telemundo, who are scheduled to begin coverage at 9 p.m. (ET). Bret Michaels and Natalie Morales are slated to co-host the broadcast.

The image above sends shivers to my spines…and for a valid reason.

Year after year, Donald Trump takes time out from his busy schedule to do an “ocular” inspection of the Miss Universe candidates with MUO President Paula Shugart for the sole purpose of making his own selections. Without a doubt, this activity actually looks offensive to a lot of pageant followers around the world and the ladies themselves. What’s the use of having two separate panels of judges (one for the prelims and one for the finals) when “thy will be done”? It’s like all 83 beauties are asked to line up like toy figurines and one VIP customer (together with his personal shopper) would ‘dictate’ countries whose representatives he takes a particular shine on. And what can we, ordinary mortals, do about it? Nothing but just nod our heads sideways in subdued disgust.

Hopefully, Mr. Trump specifically remembers the name of one of the planets – “Venus” that is – while relaying his picks to Ms. Shugart. 😉

This is one of the ‘privileges’ of owning the Miss Universe Organization – which is why my impossible dream is to own the same….maybe not in this lifetime but the next! 🙂

I would just like to share this video interview of Miss Philippines Venus Raj as conducted by Yong Chavez in Hollywood, California during the Miss Universe Media Tour. 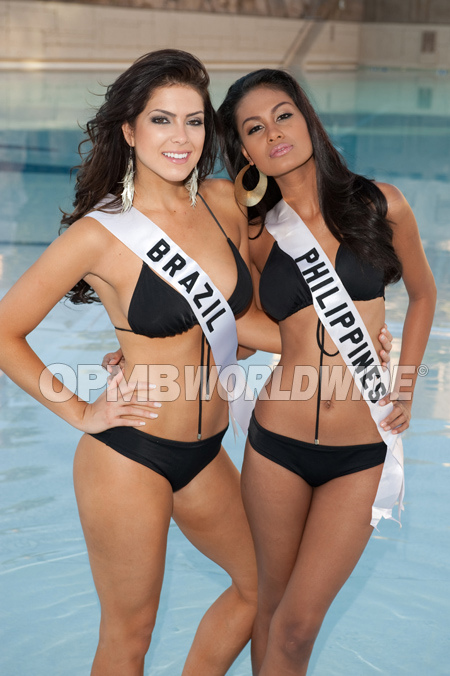 She is oozing with self-confidence here! 😉

Below is a promotional video for MUO Magazine…

Those were the words of Miss Venezuela Organization President Osmel Sousa to Binibining Pilipinas Charities, Inc.’s Stella Marquez Araneta. Ms. Jade Kennedy of OPMB Worldwide, who has been covering the Miss Universe 2010 in Las Vegas for the past three weeks now, has witnessed the meeting between these two heavyweights in the pageant world.

BPCI Head Stella Marquez Araneta is smiling ear to ear nowadays. Venus Raj is one of the strongest bets to win Miss Universe 2010.

I’m waiting in bated breath and keeping my fingers crossed. There is a very good reason to hope this year. 😉