An Ethnic Costume Competition for Misters of Pilipinas 2015 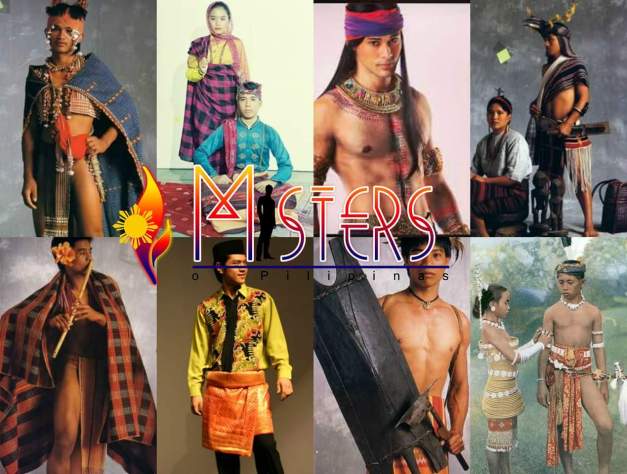 Last year, we introduced the Festival Costume Competition to showcase the country’s most celebrated festivals.

THIS YEAR we are very proud to introduce the ETHNIC COSTUME COMPETITION!

There are over 100 tribal groups/original inhabitants of the Philippines that are still proudly wearing authentic, colorful and diverse ethnic costumes of the the Philippines and the most celebrated designs will conquer the center stage of MISTERS this September!
Watch out for a special night dedicated to FILIPINO ETHNICITY and INGENUITY! 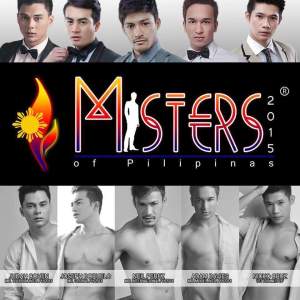 Misters of Pilipinas 2015 is looking at starting a novel concept in the male pageant – an Ethnic Costume Competition. This will definitely give major highlight to the authentic tribal attires in the Philippines that have not been given enough exposure due to the predominance of Barong-inspired get-ups and the flashier festival garbs that we saw during last year’s edition.

If you will notice, the organizers have started reaching out to Visayas and Mindanao for pageant support, as well as getting productive inputs in making 2015 a more remarkable year for the event. Prior to this, I already blogged about Mati in Davao Oriental as the provincial host of the Pre-Pageant and the beachwear photoshoot.

Things are falling into place nicely. In addition, the upcoming July 5 screening has attracted a solid number of applicants (see the sneak pic below) which should make the date more promising in terms of the quality of contestants.

Keep up the good work, Misters of Pilipinas! 😀

Misters of Pilipinas 2015 received an overwhelming number of applicants

Pull out of Miss Universe, Mexico just did. 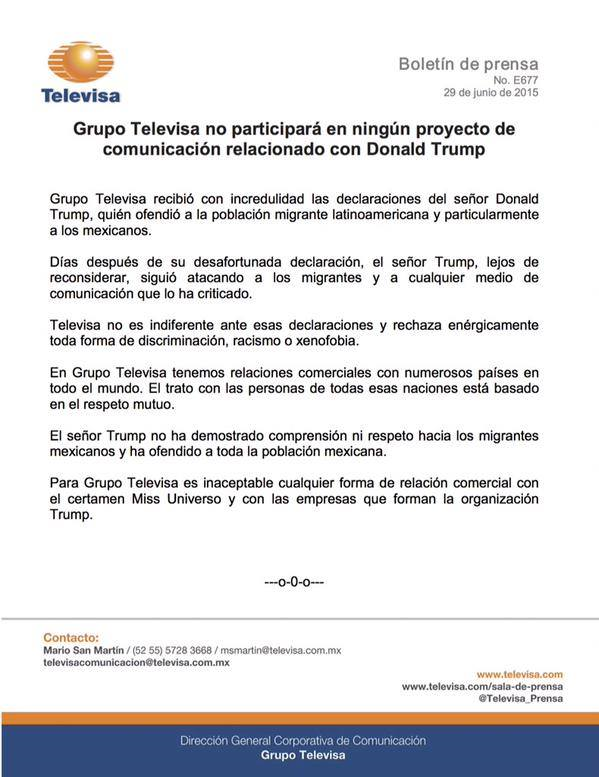 It’s now official. Based on the official statement above, Televisa has effectively pulled out of Miss Universe.

And that leaves Miss Mexico-Universe 2014 (or Nuestra Belleza Mexico 2014) Wendy Esparza without a contest to compete in during her reign (unless the national organizers find another contest for her).

Meanwhile, Donald Trump could be shaking his head furiously. Is this worth all the free publicity he constantly yearns for? Or will he make a grand-standing apology to the whole world at the right time and retract all the discriminating statements he unleashed prior? He is piling up “enemies” left and right.

Will an apology be even acceptable to everyone concerned?

Is Donald Trump’s world starting to crumble? Or is everything just a big effing publicity stunt?

N.B.C. (as in No Broadcast Channel) for Trump? 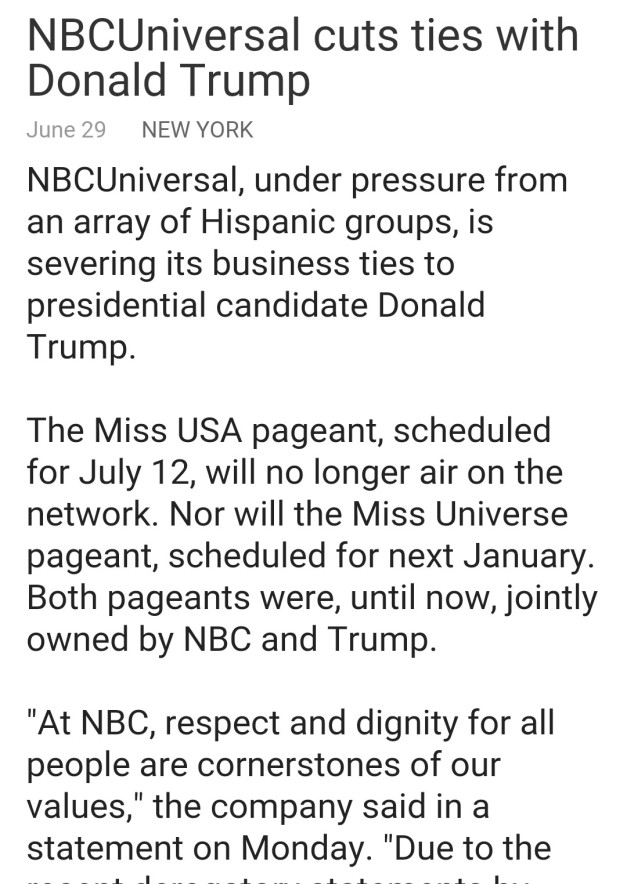 With NBC Universal severing its business relationship with Donald Trump after the latter’s unsavory remarks about Mexican immigrants, where will that leave his pageants in terms of being seen by millions? Back to live streaming? Or a less known cable channel perhaps. Oh, this is not good. At all.

While the other beauty competitions are scrambling to put their best foot forward to get the nod of broadcasters around the globe to air their respective events, here comes the biggest one alienating itself from the pack.

So where will Mr. Trump pick up the pieces from here? NBC Universal is a bigger opponent. Miss USA 2015 will be the first major casualty.

And notice the target month of Miss Universe indicated on the news article by CNN above. Another January playdate for the pageant? Oh, this is getting grim by the day.

Meanwhile, guess whose eyes are twinkling and lips smiling from ear-to-ear in another part of the World.

Update: Now, Farouk Systems (makers of CHI) has also followed the exodus after withdrawing its major sponsorship with the Miss Universe Organization. Who will do the hair of the ladies now?

Mark the date: July 15 for all budding and professional photographers

My photographer-friends from Fabmanilaph doing what they do best (Photo credit: Lito Caleon)

This year, Mutya ng Pilipinas has launched a Photography Contest open to all amateur and professional photographers who will shoot the thirty (30) swimsuit-fitted Official Candidates of this year’s edition at the poolside of Maxim’s Hotel in Resorts World Manila on July 15.

Get your cameras ready because the prizes up for grabs are nothing to sneer at (see above for details). The Top 3 winners will be announced during the scheduled Press Presentation on July 17. 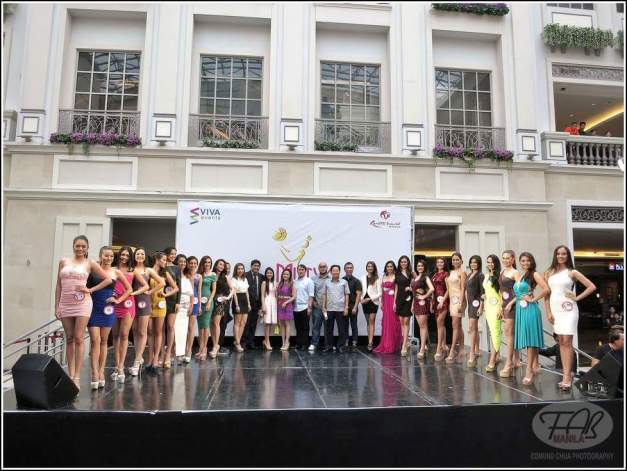 Above are the twenty (20) local beauties (with the screening committee) who will be joined by ten (10) overseas Filipinas as Official Candidates of Mutya ng Pilipinas 2015 during last week's final screening (Photo credit: Edmund Chua for Fabmanilaph)

Brenna during her three previous pageants

Brenna Cassandra Gamboa is a woman on a pageant mission. And she doesn’t mind even if some beauty contest followers would throw potshots at her frequent cross-overs. The more important thing is to give it a try because you’ll never know if this could be her best attempt to date.

You see, Brenna has now qualified as a Mutya ng Pilipinas 2015 Official Candidate – her fourth in the nationals. After reaching the semifinals during Miss Philippines Earth 2011, clinching 4th Princess honors to Miss World Philippines 2012 and wearing pin #17 in last (early) summer’s Bb. Pilipinas 2015, this could be the competition earmarked for her potential top victory.

Towering at 5’10”, Brenna is definitely one of the tallest in this batch, if not the tallest pending the arrival of the candidates from Filipino Communities abroad. And given all her past experiences, she could gain a good advantage once the pre-pageant activities commence and judgment sessions take place.

I’d really like to see Brenna do well in what could be her final stab for a good crown. Let’s see how well she will fit in Mutya ng Pilipinas 2015.

Last night at the AFP Theater in Quezon City, the finals of Miss Teen Earth and Little Miss Earth Philippines 2015 was held. At the end of competition and deliberation among the judges, the best from each set of contestants were proclaimed as winners.

17 year-old Juliane ‘Aya’ Fernandez from Pasig City was crowned Miss Teen Earth Philippines 2015 by outgoing Vanessa Mae Walters. From among the juniors, 9 year-old Nicole Kaye Santos from Cebu City was adjudged Little Miss Earth Philippines 2015 and succeeded Maria Bernadette Datu for the title. The two will now continue the mission of their predecessors, and that is to start useful environmental projects for their respective home cities and key areas around the country.

Congratulations to all the winners, as well as to Captured Dream Productions headed by Vas Bismark. 😀

And the search for Miss USA 2015 begins 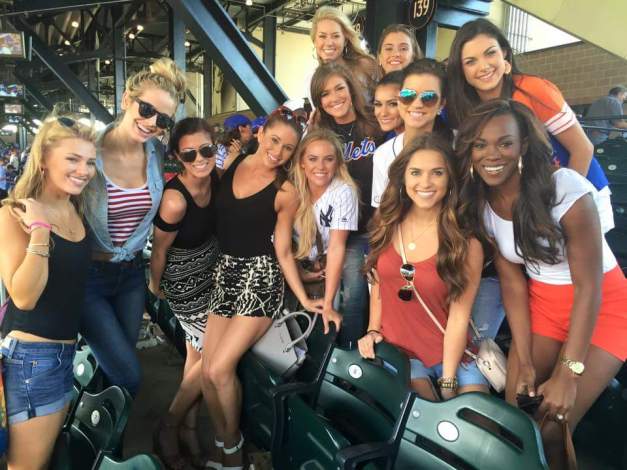 Baton Rouge, Louisiana is abuzz with beautiful ladies nowadays. The delegates of Miss USA 2015 are in town and are gathered to compete for the crown that will give the winner the right to be the US representative to Miss Universe 2015 and become the successor of last year’s Nia Sanchez.

It’s still all sunny and amicable after arriving over the weekend. The candidates are still establishing their presence and sizing up opponents in the flesh. But give it roughly two weeks from now, the atmosphere will turn more fierce and exciting as the Preliminaries start kicking in and the Finals (on July 12) comes close to its much-awaited climax.

For now, let’s give them time to enjoy the Louisiana brand of hospitality. 🙂

Some of the arriving state reps for Miss USA 2015

Angelee VS Miriam for Miss Multiverse 2015

Angelee is fiercely beautiful in these shots taken by Raphael Yu

Two former Miss Earth Beauties will battle it out for Miss Multiverse 2015 in Congo. There’s Miss Philippines Angelee delos Reyes from Miss Earth 2013 (Top 8) of course. And then there’s Miriam Odessa of Tanzania, Miss Air 2008. Who will prevail between the two of them?

Both are highly competitive ladies. And I reckon that they will tackle the reality pageant with confidence and lots of personality. Who’s your bet? 🙂

Miriam Odemba is hauntingly captivating in her share of photos here.

A screenshot of the Bb. Pilipinas 2015 Queens' Dairy Queen TVC

Our Bb. Pilipinas 2015 Queens with some DQ employees

So the big reveal of the first thematic TVC of our Bb. Pilipinas 2015 Queens for Dairy Queen is now out. Watch the two (2) videos below. The first one is the final cut of the said commercial that has started airing on cable channels. The second one shows behind-the-scenes of the shoot itself which gives you quick glimpses on just how much fun they had in finishing the whole thing.

I bet you’ll be tempted to get your DQ fix soon after. 😉

Wilbert together with the other delegates of Mr. Gay World 2009

Back in 2009 when Eric Butter and Dean Nelson embarked on a mission to create a global competition that would inspire and empower gay men to come together in a public performance that would show the world that being gay encompasses a broad spectrum. The mission to demonstrate that both inward beauty and physical appearance are equally important as is leadership and confidence. It was their hope that by bringing these men together they would share their experiences to open both each others’ as well as the public’s eyes that in many regions on our planet being gay is a challenge and a fight for basic human rights. The pageant was held at Whistler Canada on February 2009. Mr. Gay World was born.

While Wilbert did not win the big prize (Max Krzyzanowski of Ireland did), he was able to establish a mark by clinching two very special awards – Best in National Costume and Mr. Gay Popularity – on top of Best in Casual Wear. And during Mr. Gay International-Philippines 2008, he collected for himself the prizes for being Best in Talent, Congeniality Award and Photographer’s Choice Award. Below is a short video clip of his National Costume Presentation during Mr. Gay World 2009.

With his colorful and free-spirited personality, Wilbert has built a pageant career that spans from the early years of the new millennium up until last year when he took part in “I am Pogay” of ABS-CBN’s ‘It’s Showtime’ and reached some good measure of success. 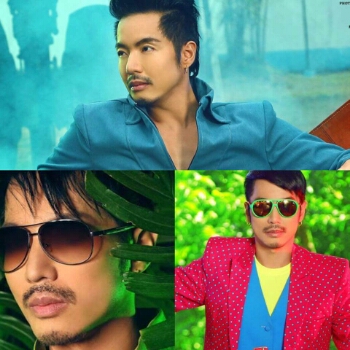 As the CEO and Founder of F Philippines, our subject is the hands-on boss of the establishment that was more popularly known as Fahrenheit Cafe and Fitness Center, but now running by the simple one-letter ‘F’. Through this successful business venture, he has brought a lot of joy and nightly entertainment to the LGBT community in more ways than one. He is also the President and Marketing Director of Illusion Bags, as well as the CEO/Founder of G.E.B.