For the last day of March, I am completing my ‘Getting-to-Know’ series with Ayelee Marie Dasalla, the girl who replaced disqualified candidate Maxine Medina. Hailing from Mariveles, Bataan, she made some news during the Press Presentation as the beauty who used to weigh 201 lbs. in her younger years, but decided to lose significant weight to preserve her health. She eventually joined provincial beauty contests when she realized that she was already trim enough to be taken seriously in the same. Landing 1st Runner-Up in Miss Bataan 2011, she was further encouraged to train more so she can set her sights on fulfilling a childhood dream – to join Bb. Pilipinas. At the moment, this Nursing graduate is enjoying the fleeting fame that comes with being an Official Candidate for 2012. Blessed with a good height (5’7″) and near-flawless skin, she is hoping to do well in the national pageant and serve as an inspiration to overweight young women who want to achieve what she did.

Will Ayelee turn the tide from being a ‘biggest loser’ to a ‘biggest winner’?

The next two weeks will see if she is destined for bigger things in Bb. Pilipinas 2012. 🙂

Here’s a BIG shout-out to my new favorite Kapuso, Benjamin Alves, who is turning 23 today. 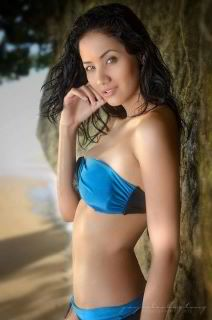 Elaine Kay Moll can always lay claim to the fact that she is the tallest candidate in Bb. Pilipinas 2012 representing Northern Samar (though she was born in Buhi, Camarines Sur). Whiffs taller than 5’10”, she has the height envied upon by the other girls who have to contend themselves with wearing really tall heels (or platformed heels) to minimize being dwarfed beside her. A former member of the women’s basketball team of NU (National University) Bulldogs, she underwent some major (non-invasive) transformation from shooting hoops and wearing Nike Airs to walking the runway and fitting elegant evening gowns and swimwear.

Aces & Queens should be given full credit in molding Elaine’s beauty queen potentials. She may not have the most entrancing face among the 30 delegates, but she scores high in other areas. Her charm is the type that wouldn’t grab at you in an instant. Instead, she kind of projects the aura of Catherine Jane Brummitt (BPI1984) whose beauty grows on another individual after spending some time in her company.

I heard from the grapevine that Elaine is one of the favorites of BPCI Head Stella Marquez de Araneta. The latter must love her height (which cannot be negotiated in any humanly possible way), innocent looks and compliant ways. But then again, she needs to do her part in impressing the judges because SMA can only do so much in sounding them off. 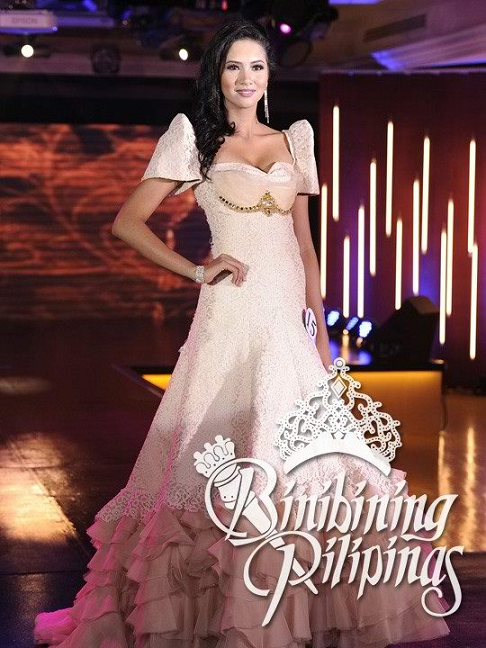 How high will Elaine Kay Moll move up in the competition? Will she give the constant favorites a real fight for one of the titles?

Do express your thoughts, dear readers. 😉

In Motion: The Bb. Pilipinas 2012 Parade of Beauties

Watch the Bb. Pilipinas 2012 Official Candidates during the Parade of Beauties at Araneta Center last Sunday, March 25. The videos are below courtesy of OPMB Worldwide (opmbvids).

I’m sure you’ll have a field day looking at those painfully #@%!<&?*% headdresses. LOL! 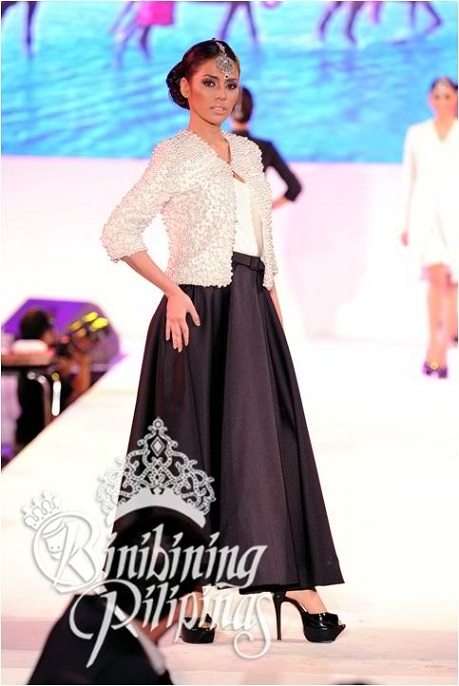 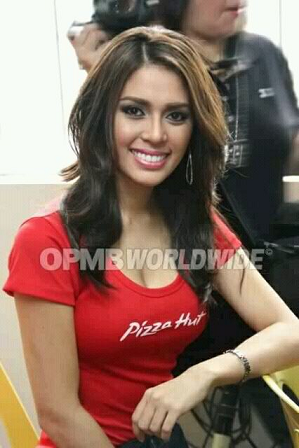 Let’s now give way to one of the most popular candidates of Bb. Pilipinas 2012. Mary Jean “MJ” Lastimosa is slowly becoming the girl you will either love or love less. Pro-MJ camps put her on a pedestal, short of bestowing the highest crown at stake if only they could. On the other hand, Con-MJ groups are not impressed to say the least. An over-satiation perhaps? Regardless of where you stand, nothing’s gonna stop this Davaoena from giving her 100% in achieving her ultimate objective: to become Shamcey Supsup’s successor.

What else can she offer beyond the now-famous killer body and highly-trained pageant disposition? A much improved (and less grandstanding) performance in Q&A possibly? Whatever it is, she needs to work double time because – just like Janine Tugonon – the risks are very high if she ends up just matching (or worse, not reaching) her 2nd Runner-Up finish last year. Methinks only one of them will become a big winner. MJ or Janine? 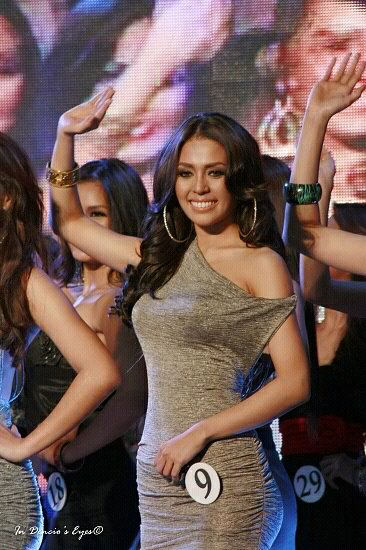 Place your bets, my dear readers. See if MJ Lastimosa will take it all the way in Bb. Pilipinas 2012! 😉

If there’s one thing 22 year-old Janine Tugonon learned from her stint in Bb. Pilipinas 2011, it’s the fact that finishing 1st Runner-Up added wonders to her life and over-all personality as she was ushered in to a world of glamour while getting trained alongside the reigning queens. Her already high level of confidence was further boosted, and this must have given her enough reasons to try her luck once more with Bb. Pilipinas 2012. Truth be told, she and fellow runner-up Mary Jean Lastimosa possess the upper hand in this year’s batch. They already know the updated ins and outs, the nitty gritty and the system of BPCI so it wasn’t hard adjusting to the daily grind of attending endless activities like photoshoots, personal appearances, fashion shows, sponsor/charity visits and what-have-you.

The 5’9″ (as per the candidates’ profiles) Janine has come a long way from her growing up years in Bataan to her stay in UST where she finished a degree in Pharmacy to joining Bb. Pilipinas (and placing fourth) last year up to the present where she is definitely eyeing one of the crowns on April 15.

Will Janine realize her dream of wearing a Bb. Pilipinas crown on her head? Or will Mary Jean Lastimosa grab one instead?

The heat is on as we approach the countdown to Bb. Pilipinas 2012! 😉

More of the Bb. Pilipinas 2012 Parade of Beauties

Here are more images (courtesy of OPMB Worldwide/PaoPao) of the Bb. Pilipinas 2012 Parade of Beauties held yesterday afternoon around the Araneta Center. The headdresses really need to go. They do not only distract the attention from the candidates’ faces, but also cheapen their total presentation (Bella and the Bellestars, anyone?). There must be something more tasteful to dress up their heads, like a sole orchid tucked behind their right ear maybe? Anyways, enjoy the photos. 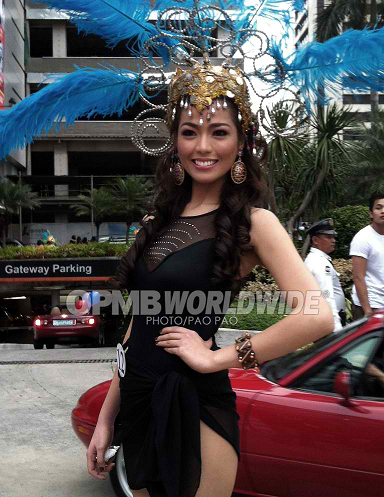 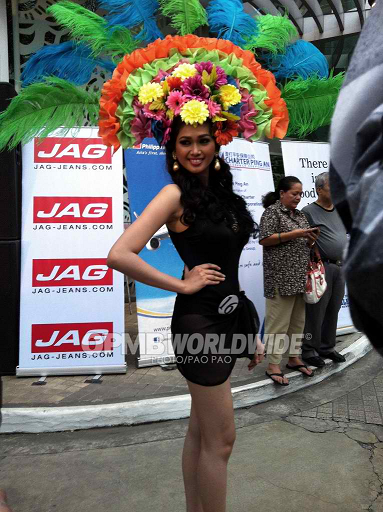 Now, aren’t these ladies the best troupers ever? If I were a candidate, I would ceaselessly cringe at the thought of parading around the commercial area wearing those eyesore of headdresses. Okay, enough with the bashing of fake flowers and peacock-colored feathers. 😉