R-L and his Angels: Waiting in the Wings 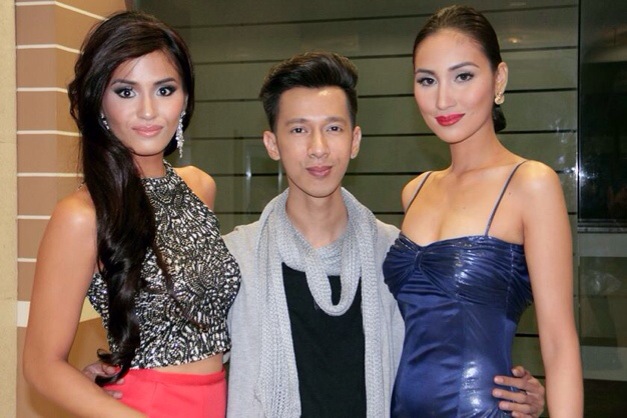 It doesn’t happen very often. RL de Leon Lacanienta (middle in the pic above) posing with his Bb. Pilipinas wards for a photo, that is. And given that he has only two (2) Angels this year, the guy has really gone out of his way to make sure that Aiza Faeldonia and Angelique de Leon are well taken care of – from head to foot.

So what do you reckon are the possibilities of both ladies or one of them securing a place in the magic circle come March 30. You must have filled up your plates with names from Aces & Queens and Kagandahang Flores plus one or two from Team JDV. Where do the Angels of R-L figure out in your analysis? Is the competition too strong for them? Or do you honestly feel that a placement is in store for the duo? 😉

They may not have been the best of friends during their one-month stay in Bali for Miss World 2013, but still, they reunited in Moscow for Miss Russia 2014 and had a pleasant time checking on each other’s latest.

Miss World 2013 Megan Young and Miss Russia 2013 Elmira Abdrazakova will both be present for the national finals tomorrow. But hopefully, our Queen will still have time to go sightseeing in the Russian capital. With Elmira as tour guide, of course. 😉

Dairy Queen and Bb. Pilipinas – they go together 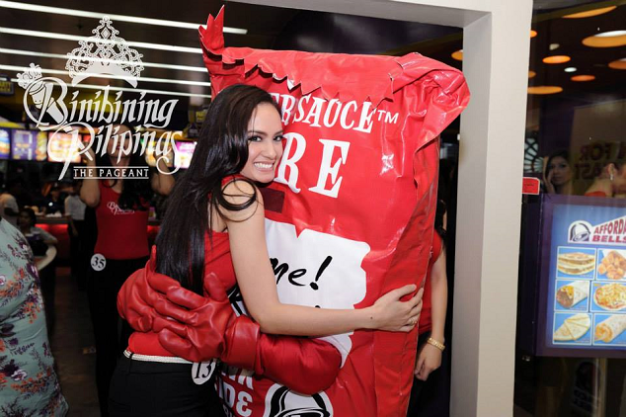 The Taco Bell mascot must be so thrilled to get a hug from Binibini 13 Kris Tiffany Janson. 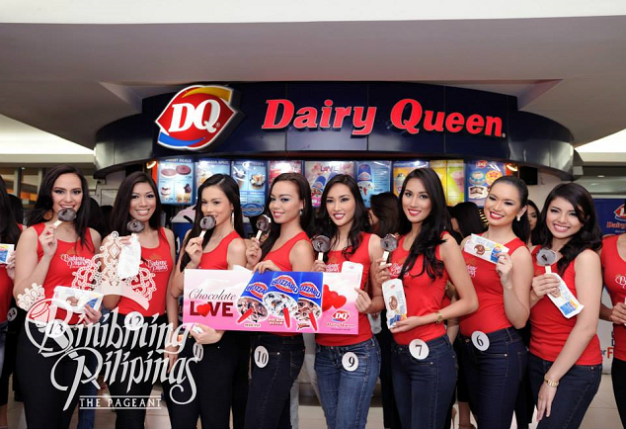 In the Philippines, international pizza (Pizza Hut), ice cream (Dairy Queen) and Mexican fast-food (Taco Bell) chains are almost always associated with Bb. Pilipinas. And why not? The Aranetas own their franchises in the country and what better way to promote the same than to have the beautiful ladies competing in the nationals every year visiting one or two outlets of each.

I do love all four. Pizzas, ice cream, tacos and beautiful ladies. And for as long as the candidates are not required to stuff themselves with the calorie-rich dough, blizzards and nachos then everything’s good. 😉

And it finally happened.

Miss World 2013 Megan Lynne Young and Miss Universe 2013 Maria Gabriela Isler meet face-to-face in Moscow to judge and co-assist in crowning Miss Russia 2014. You can easily see the glow in their faces, knowing that both are warm and friendly beauty queens representing the two biggest international beauty competitions.

While Molly’s height towers over our Megan, that detail is already beside the point. You simply can’t deny the fact that the latter exudes a more regal bearing in the pic above.

Here’s looking at you, Yvethe! Binibini 35 Yvethe Marie Santiago from the lens of Jory Rivera

There’s no question that Binibini 35 Yvethe Marie A. Santiago is occupying a permanently-fixed spot among everyone’s favorites for Bb. Pilipinas 2014. Otherwise, you must be living under a rock if your personal scoresheet doesn’t even have her name in the top tier of choices.

And the 20 year-old’s #1 supporter (aside from Dexter, of course), Gerry Diaz of Aces & Queens, is covering all bases to make sure that the gorgeous Albayana is on the right track for a crown. He is the one who finalized the color RED with Yvethe’s family, fans and kababayans. And I’m pretty sure he will lead the cheerers come March 30 inside the Smart Araneta Coliseum.

But back to Yvethe, do you agree that getting crowned as one of four Bb. Pilipinas titleholders is already a foregone conclusion (written in the stars if you will)? Or are you still leaving some room for other considerations and/or combinations? The question has already been a topic of discussion in the past few weeks. It helps to refresh your insights on the same, don’t you think?

She’s always ready for her close-up, by the way. 🙂 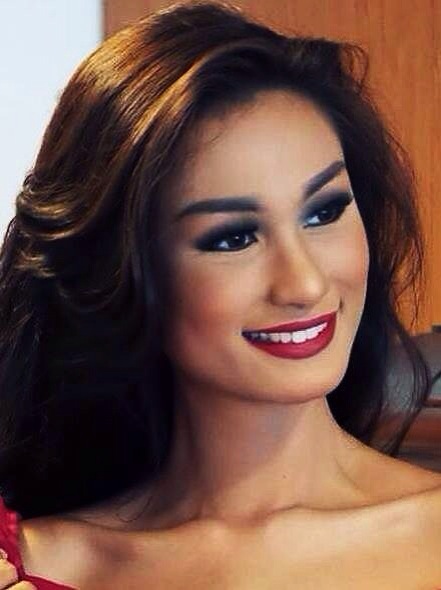 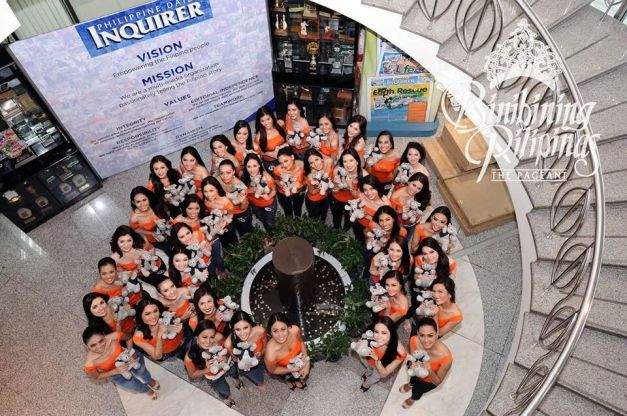 Proudly displaying their stuffed toy ‘Guyito’ after visiting the Inquirer.

Just like the courtesy call made by the Bb. Pilipinas 2014 Official Candidates at Manila Bulletin, they also trooped to the offices of the Philippine Daily Inquirer where each of the ladies were given their souvenir “Guyitos”, or the stuffed carabao mascot of the newspaper company.

All forty (40) Binibinis were accounted for. 😉

Before anything else, focus on the six (6) images of Binibini 28 Carla Jenina Lizardo in the photo grid above. Which look do you like the best for her? I’m actually leaning on #3 because it shows her best angle, aside from dramatically softening her features.

More than just taking selfies while stuck in traffic, Carla loves to talk and socialize. This I discovered during my two encounters with the TV news presenter-cum-radio DJ. Actually, she appears lovelier in person and is effectively larger than life in terms of overall presence. She has a glowing vibe that starts charming people the minute she flashes her engaging smile. Best of all, she is the type of conversationalist who is just as good as a listener. And methinks she will be able to handle the formal pre-pageant functions of Bb. Pilipinas 2014 with such ease and sophistication.

How about the competition itself? My gut-feel is that she can draw positive impressions considering that she registers best during interpersonal plays. She is aware that some of her fellow candidates are definitely ahead in terms of hype and popularity. But a level-headed mind keeps her in good stead. Should she spring a surprise somewhere, I won’t be taken aback anymore. 😉

Knowing how to accessorize shows a Binibini’s sense of style

A good Binibini knows how to accessorize well

Pia Wurtzbach for a personal appearance with simple formal styling.

A girl’s sense of fun and style can be seen in how she dresses up and adds the right kind and amount of accessories to go with the get-up. While a personal stylist can render valuable help in completing a look, I am always fond of ladies who know how to do things on their own and can mix & match an eye-catching pair of earrings with an understated bracelet or vice-versa. I also appreciate cool bag hags who are either affluent enough or those without the fat budget to buy the most expensive brands just to make a fashion statement.

If you want to get an idea on Accessories 101, start by watching the howcast videos below as facilitated by fashionista editor Verena von Pfetten.

How about you, dear readers? Any tips or advice you can share about the subject? 😉

Today is the 24th birthday of Miss World 2013 Megan Lynne Young. Let us all wish her (@meganbata) the best for the remaining months of her reign and beyond. May her dream to have the Philippines host Miss World 2014 come true.

Enjoy your special day, Megan! Have a safe trip to Moscow for Miss Russia 2014. 🙂

Below is a recent pic of Megan with brother Victor.

I am saying it out loud now, echoing the views of a good many. Kris Tiffany Janson’s biggest competition is herself.

While the line sounds trite and incessantly used by several other individuals who do not want to give the benefits of another person’s name shining more than his/hers, Binibini 13 is looking more and more like competing against herself in Bb. Pilipinas 2014.

People have been comparing the way she presented herself during Miss Cebu 2009 and now. And the verdict is that she should go into that regional mode in terms of styling and projection. My personal take, though, is for her to take snippets of good points from five year ago and incorporate them into her modernized version. The smile, for one, still needs to be perfected. But in general, I actually like her now. Back then, she was only 19. And the improvements are in keeping with the times.

So how do we really inject a more dynamic spin in the already-gorgeous Cebuana?

I read a tip on how to have fierce confidence. It goes something like this: “Look at yourself in a mirror without combing your hair or putting on makeup and think, “I look just fine.” Makeup is for the insecure, not for lovely girls with fierce confidence.”

While this advice is not to be followed to the letter, the more important thing to remember is to start from within, look for that inner spark that would jumpstart an outward persona that conjures excitement and tempered sensuality – something that would put in motion what she exudes well in pixels. 😉