And now, an Official Statement from Bb. Pilipinas Charities, Inc. (BPCI) informing everyone about the non-renewal of the Miss Universe Organization license with their organization.

Every night before she sleeps, Miss Universe Philippines Gazini Christiana Jordi Ganados thinks of pleasant thoughts (just like in the video clip below when she was with Baby Stellan of MUO’s Shawn McClain) to set her up for a positivity-filled early morning once she wakes up and faces another day of Miss Universe competition in Atlanta, Georgia.

This one has not been confirmed yet by the Miss Universe Organization. But talks are getting loud that our very Miss Universe – Gloria Diaz from 1969 – will be one of the judges in the all-female panel that will choose Miss Universe 2019.

If this holds up as true, then her 50th Anniversary as the titleholder will be more significant.

Who could be the next Miss Universe Philippines? 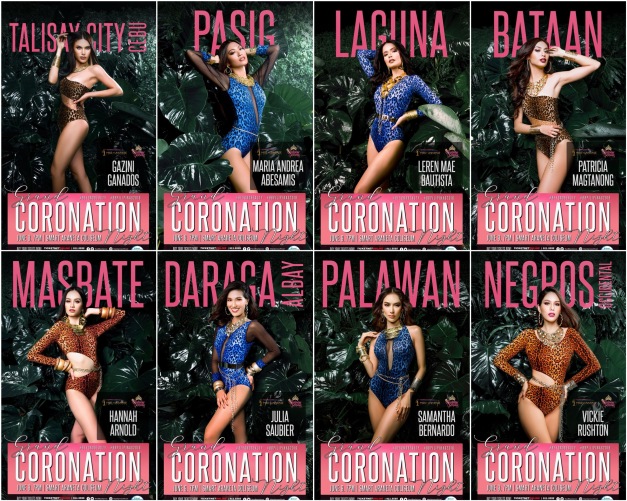 My #Infinity8 for Miss Universe Philippines 2019

The next Miss Universe Philippines will occupy a very unique spot in our country’s modern pageant history if plans of the Miss Universe Organization to bolt out from Binibining Pilipinas finally comes to fruition and becomes a stand-alone marquee in the search for the best Filipina to represent the Philippines in the annual Miss Universe beginning 2020. And what a year to start that endeavor – with the clearest vision (read: 20/20) in their mission – widen the brand reach on a largely independent scale and make it a dedicated national crown that will attract only the best of the best aspirants to join.

Now, in the event that none of the above happens in 2020, further stalling takes place and the title stays with BPCI to share top billing in its official logos, then Miss Universe Philippines 2019 will still be one proud Filipina because she will have won the crown after passing through the eye of the needle so many times before finally getting bragging rights as the ultimate victor in one of the toughest – if not the toughest – assembly of ladies who have what it takes to be called #1.

My #Infinity8 for Miss Universe Philippines 2019 reads like a who’s who of Bb. Pilipinas 2019:

We now conveniently remove the four Binibinis (Gazini, Leren, Samantha and Vickie) who have already been assigned titles in my seven-part series of Final Predictions. We are left with the same number – Aya, Patch, Hannah and Julia.

In an extended play on the idiom, I start with this: “Two’s Company, Three’s a Crowd, But Four on the Sidewalk is never allowed.”

Aya (right photo) is the lady almost every seasoned pageant chronicler would wishfully want to win as Miss Universe Philippines – the most obvious reason being that she is the daughter of Bb. Pilipinas Universe 1984 Desiree Verdadero-Abesamis. But I distanced myself from such justification because newsworthiness is not the best suit to anchor anyone’s decision on – at least not in our kind of pageantry that has evolved though decades of change. Frankly speaking with no offense meant, will IMG even bother making a big deal out of that relatively novel detail?

To be fair, Aya has improved from last year. The styling and HMUA team made sure that almost all bases are covered in presenting a more polished version of her. Except one, in my opinion – and that is something that you just cannot change completely – her inward personality. In my original line of profession of Psychology, she is likely to be an introverted artist – someone who is not easily influenced or swayed by others since she can think outside the “proverbial” box and be more introspective. I will stop psycho-analyzing here because my only point is that she is the one I am leaving out first in the quartet. I just feel that she is not the best fit for the “empowered woman” image everyone is looking for. 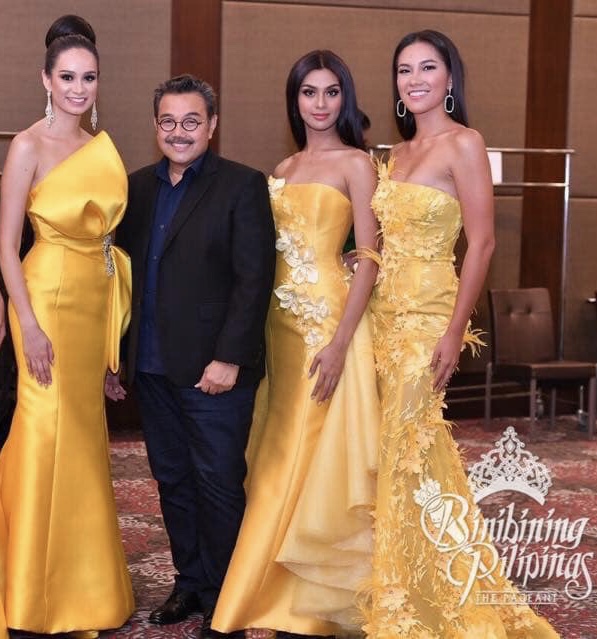 Designer Ito Curata poses with three of his five muses during the Charity Fashion Gala. They also happen to be the three Binibinis who make up my final shortlist for Miss Universe Philippines 2019 (left to right): Hannah Arnold, Patch Magtanong and Julia Saubier

Hannah is a Filipina-Australian sweetie who has grown so much more in nearly three months of involvement as a Binibini than perhaps any other significant chapter in her 24 years of existence. From being a wide-eyed cheerer of a spectator who watched the Victory Parade of Miss Universe Catriona Gray unmindful of the random street shots taken of her in a casual and lightly-made look, she has transformed to a more refined competitor who can now play by the rules of the pageant game without losing her trademark gentleness. The charming accent is icing on the cake.

Filipina-French Julia is the exact opposite of Hannah. She is headstrong, verbally aggressive in a politically correct way and extremely focused on every fine detail that went into her preparations leading to Sunday night’s Grand Coronation. She doesn’t mince with words when she says that the only title worth fighting for is Miss Universe Philippines. After all, it was the victory of Catriona Gray last December that greatly inspired her to join the nationals one year in advance (she was originally eyeing Bb. Pilipinas 2020). And her game plan seems to be working nicely at this point where she is being considered as a dead-serious contender for the crown. Her facial beauty may have elicited mixed reactions for some. But the minute she opens her mouth to speak, all cautions get thrown in the wind. 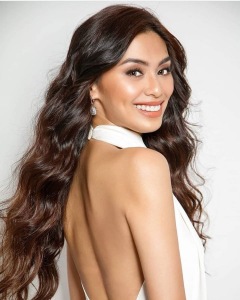 And then we have Attorney Bea Patricia Magtanong who was allegedly asked this question during the closed door interviews: ”We have sent lawyers before, and they all failed in Miss Universe, what do you think is different this time?” Don’t ask me what her answer was, but I’m pretty sure she was able to acquit herself well from that targeted grilling. Besides, I don’t consider her new professional status as one strong basis for selection. It would even be doing some kind of disservice to her own personal merits if being an Attorney is the only thing that would tilt things in her favor. She represents the Quintessential Filipina a lot of Filipinos could be clamoring for. Add to that her level of articulation plus beautiful face and you have someone who can be the last woman standing. 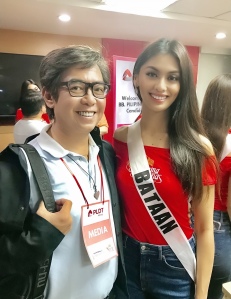 I recently responded (in a previous blog) to reader named “Sky” that I was still waiting for my epiphany moment for the title of Miss Universe Philippines. True enough, I started writing this blog entry at around 5pm yesterday. At just half past six, I ate dinner with my mom. And when I resumed writing this last paragraph at 7pm, it dawned on me after browsing through all the photos on my iPhone. I have only one taken with any of the last three Binibinis above. And that side-by-side image was not even planned because during the PLDT event in Makati, she was the one nearest me when a colleague offered to take the shot just seconds before the organizers asked us to vacate the conference room as the top officials started to arrive. I took this as one final sign – on top of all the multiple considerations inside my head – as to why it was only with Patch that I had that opportunity when it would’ve been just as easy with either Julia or Hannah. And in my heart, I can now rest easy knowing that she is the one who can close the gap between who could win and who will win.

To end this, I say that Bea Patricia Magtanong of Bataan is my Miss Universe Philippines 2019. 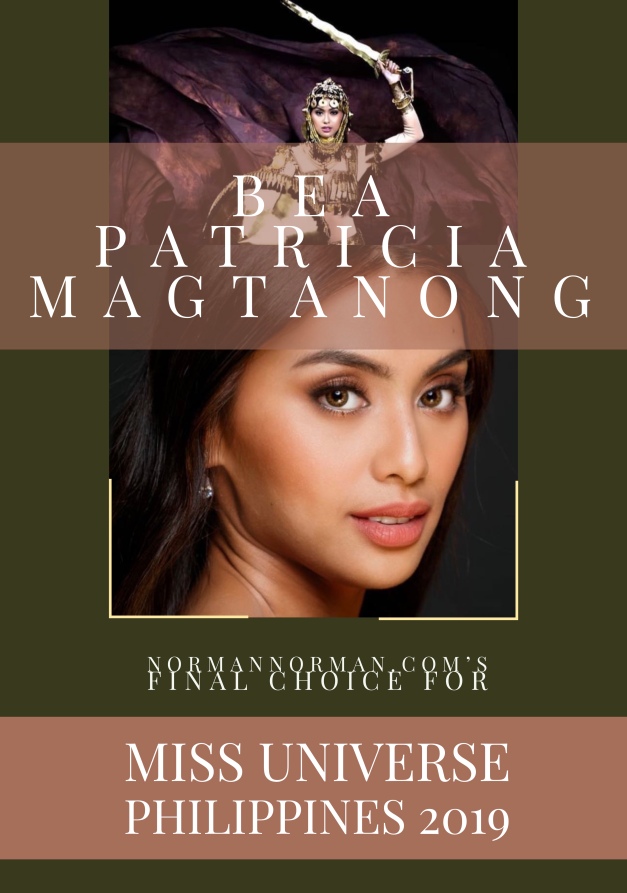 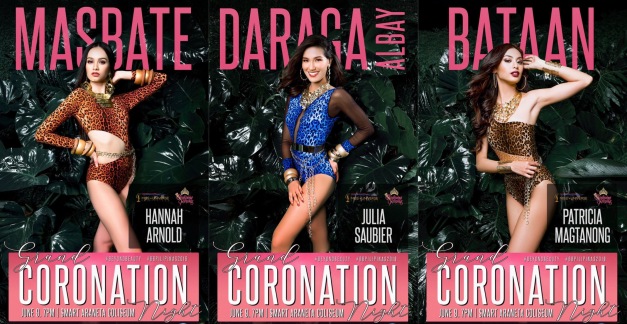 I am proud of these ladies for showing us how important it is (and how they earnestly want) to wear the Philippine sash in Miss Universe 2019. Any one of them could actually be THE ONE, but I have combined the forces inside my head and heart to pick Binibining Bataan as my Miss Universe Philippines 2019

And an interview with MUO President Paula Shugart below. 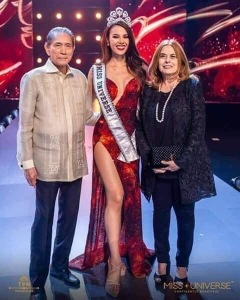 I wanted so much to end 2018 with a big bang. If only clarity on the issue of whether the Miss Universe franchise remains with BPCI or crosses over to LCS has been settled in the last few days, then it would make for an explosive year-end blog entry. But then again, that would be asking for way too much confirmation during the uber busy Holiday Season.

Pageants fans and followers are divided on the matter. But I reckon that – if we play by percentages – there would be a lot more who are in favor of the franchise staying put with Bb. Pilipinas to maintain the prestige of the country’s biggest national pageant as well as to preserve its glorious place on top of the pedestal in full hierarchial view of the entire Philippines. Besides, the record of the leadership of Madame Stella Marquez de Araneta is something that other National Directors can only hope to achieve in their lifetime.

On the other side of the coin, there is this side of business that doesn’t give much premium on sentimentality or loyalty or time-honored tradition. As the line goes, “…the only thing constant is change.” And with the ties that bind the Miss Universe Organization (MUO) and the LCS Group of Companies, the partnership could only move to a logical next step of having the franchise be placed under the latter’s care. That way, both MUO and IMG will have a more direct hand in controlling/advising how the brand is managed and sustained with progressive exclusivity.

This is me in the middle. Having grown up with Bb. Pilipinas, I would love to see MU stay with BPCI. But I’d also like to see how MU will grow nationally as a stand-alone pageant. I won’t take sides now. I will just let destiny speak for itself. Because with what I have been hearing, it could be a done deal – unless some kind of a unique arrangement can be finalized in the coming month or two.

Since the issue has not been settled yet, let me end 2018 with lyrics from the song written/composed by Prince and made more famous by Sinéad O’Connor because I personally feel that some of the lines simply fit: 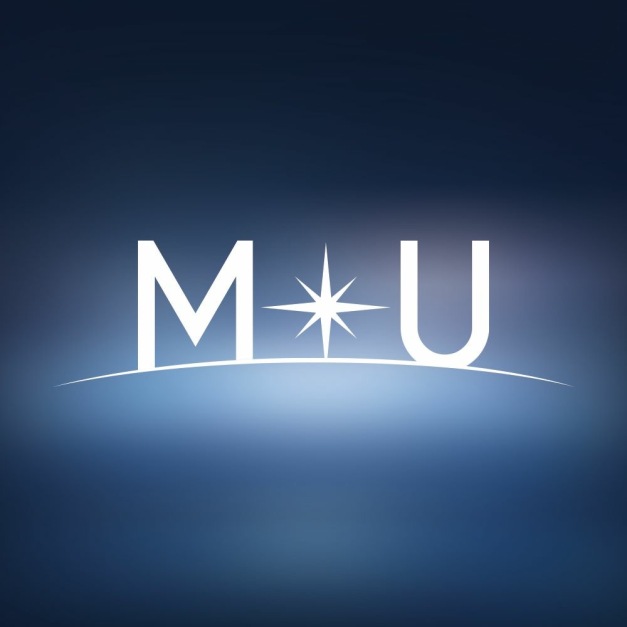 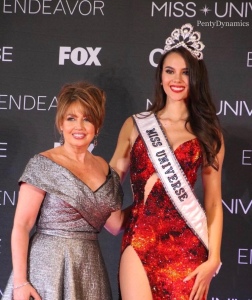 Until we get an Official Statement, it will all remain a rumor. But a strong rumor, I must add.

There are talks that the ownership of the Miss Universe franchise for the Philippines will allegedly change hands very soon. And part of the loud whispers is that Richelle Singson-Michael of the LCS Group could be the new owner. I feel sad for BPCI should that happen.

I will keep you posted on this shocking development. If ever.

PS Don’t be surprised if you hear rumors as well that the owners of Miss International and Miss Supranational are shopping around for new owners.