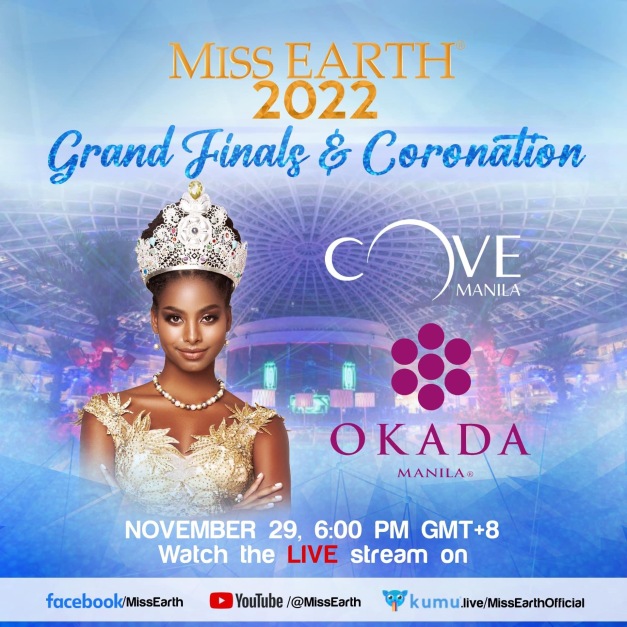 Tomorrow evening, Miss Earth 2022 is set to crown its new winner after two years of conducting its Finals virtually. This year, part of the preliminaries were done digitally. But for the most part of the edition, a return to physical pageantry was successfully organized by Carousel Productions here in Manila and around the Philippines.

Eighty-seven (87) ladies are aspiring to become the successor of Destiny Wagner. And from this large roster, I have taken the liberty of making a forecast (see photo grid above):

Among my five (5) top-tier choices, two Latinas, two from Asia-Oceania and one from Europe are looking at possibly winning the crown. And I am confidently placing my bets on anyone among them taking it all the way.

Sheyla Ravelo Perez of Cuba, Sheridan Mortlock of Australia, Andrea Aguilera of Colombia, Mina Sue Choi of Korea and Merel Hendriksen of the Netherlands are on spot to fill up the highest positions in the ultimate honor roll. And I would be happy having one of them being named Miss Earth 2022.

Among potential spoilers, my second-tier selection could provide a winner or two in the podium finish. A placement by Jenny Ramp of the Philippines is welcome but not highly anticipated. I would give stronger chances to Liliya Levaya of Belarus, Ekaterina Velmakina of Russia and Sakhile Dube of Zimbabwe.

In the end, I predict the Cuban, Australian or Colombian as big winner. And a Top 4 ranking for the Korean would really put a smile on my face. 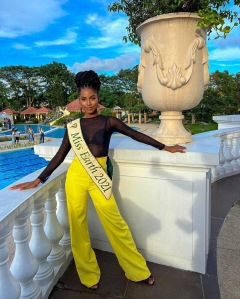 87 MISS EARTH delegates from different countries are now in the Philippines to take on this year’s theme, “ME Loves Fauna,” to emphasize the importance of caring for animal life. The theme also gives awareness of how animal life, whether wildlife or domestic, and especially the endangered species, are essential members of the environment which must be given proper care and attention.

“Apart from this meaningful undertaking, showcasing the beauty of the Philippines to the world, as it rises up from the pandemic, would be beneficial to our tourism industry. The pageant will give more focus ( staging events outdoors showing nature and picturesque eco landscapes
as much as possible to showcase its beauty and at the same time lessening its carbon footprint with natural lighting,” Lorraine Schuck, EVP & co- Founder of Miss Earth further elaborated

The virtual and on-ground events and activities will be live-streamed worldwide from the MISS EARTH social media accounts – its official YouTube Channel, Facebook and on the pageant’s Official Entertainment App Partner – Kumu.

The MISS EARTH 2022 finals will be streamed online and telecast on national and international TV stations, LIVE from Cove Manila in Okada Manila, the pageant’s Venue Partner. 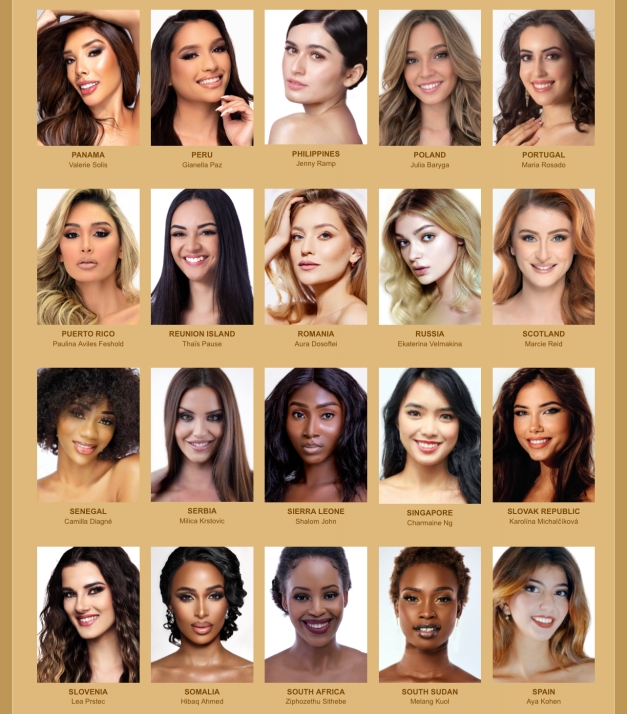 Earlier today, an official announcement was made for the host country of Miss Earth 2023.

Present during the reveal are Carousel Productions’ Lorraine Schuck, along with Miss Earth 2021 Destiny Wagner and Miss Earth 2020 Lindsey Coffey.

It will be an exciting edition of #MissEarth for sure!

We had a blast! 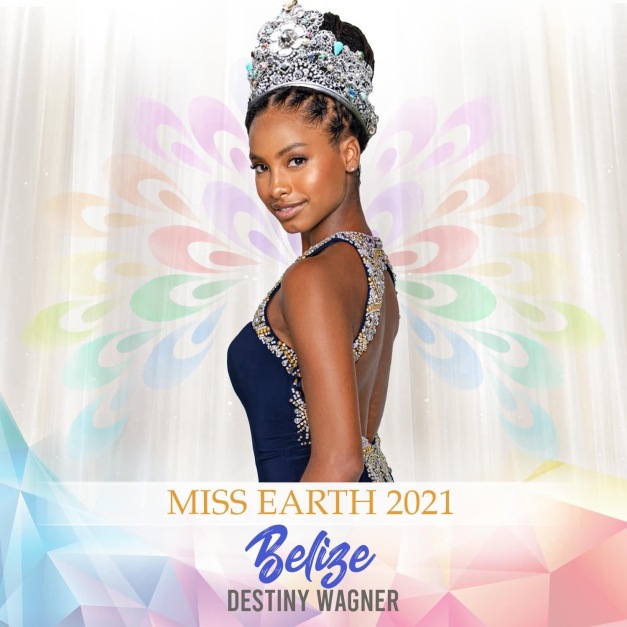 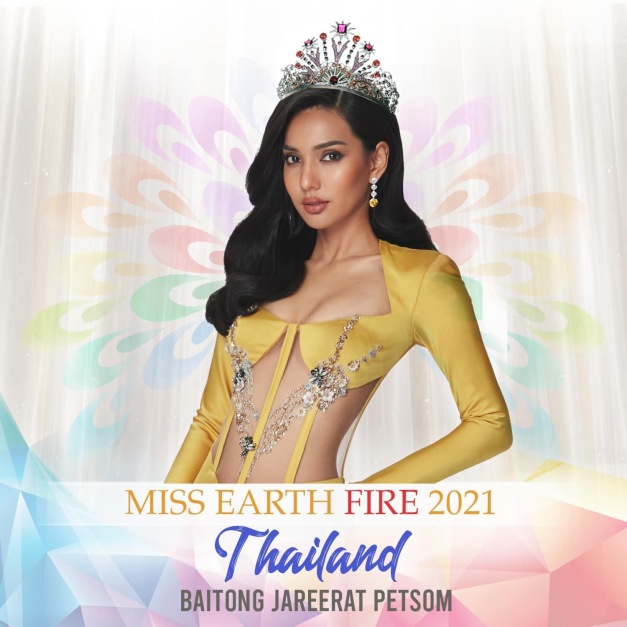 I may not have blogged significantly enough about Miss Earth 2021, but that doesn’t mean I was amiss in performing my armchair judging of this year’s competition which yielded a bumper crop of eighty-nine (89) delegates from all parts of the world. I actually did in whatever down time is left for me to review their performances.

I must say that the ASEAN contingent is extra strong with three of them having a front-runner shot to win the crown or be part of the elemental court. I am pleased that Dr Nisha Thayananthan of Malaysia continues to sustain her firm presence amidst the strong field of ladies, just as I have faith in both Naelah Alshorbaji of the Philippines and Baitong Jareerat Petsom of Thailand to keep the momentum going in their favors. Seeing all three in the Final 4 would make me very happy. But we know that the competition can turn in some surprises or non-surprises in the results.

Romina Denecken van der Veen of Chile, Marisa Butler of the USA, Maria Daniela Velasco of Venezuela, Cynthia Linnet Lau of Cuba and even Destiny Wagner of Belize can still easily spoil things and bring the fortune to their respective sides. So in essence, I have already shared with you my Top 8. And I can see the successor of Lindsey Coffey in one of them. 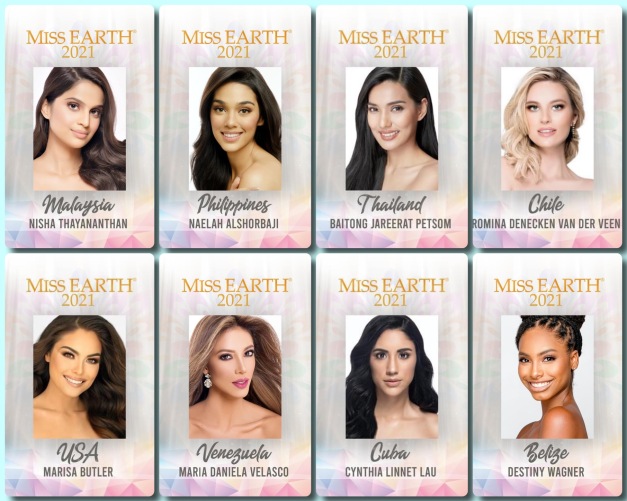 I would love to see Malaysia, the Philippines, Thailand and Chile as Final 4. That would be such a convenient arrangement for the organizers to physically assemble the winners (or majority of them) for future events. I feel, though, that USA (who is going for a back-to-back) and Venezuela will not allow that scenario to happen.

In the end, my Miss Earth 2021 prediction is a toss between Dr Nisha Thayananthan of Malaysia and Marisa Butler of the USA – with Baitong Jareerat Petsom of Thailand and Chile’s Romina Denecken van der Veen completing the quartet.

Below are the Eco-Videos of my Final 4: