Want to audition for Bodyshots 2014?

Calling all interested good-looking guys and girls who want to jumpstart a modelling career. Here’s the potential chance to shine in this year’s edition of Bodyshots. Organized by the Fashion Designers Association of the Philippines (FDAP), screening dates will be on April 14-15 to be held at the Sky Dome of SM City North Edsa. There will be another one on April 21 at Solaire Resort & Casino, a day before the final screening on April 22 in the same venue. Give it a try!

As the website notes, “Bodyshots is truly considered to be your passport to the industry. Some of the alumni of the competition include Eric Quizon, Marina Benipayo, Wilma Doesnt, Zanjoe Marudo, John Estrada, Hayden Kho, Joan Bitagcol, Rachel Soriano, Lucia Santiago, and Francine Prieto.” Reygor Gorospe Jr., 26, is a true-blue Kapampangan from Mexico (the town in Pampanga and not the North American country). During college, he played forward for the San Sebatian Stags after being a team player for the Adamson Falcons.

Right now, he is busy preparing for a ‘merman’ role in ABS-CBN’s upcoming teleserye “Dyesebel”. And this is where it could get tricky. While his participation in the same is somewhere between small and introductory, he could be in the network’s list of potential TV actors being groomed for bigger projects in the mid-term. In my opinion, he exudes a Zanjoe Marudo vibe. And we know where the model-turned-actor is now – a certified TV and movie leading man.

At any rate, I’m still putting Reygor’s name on the wish list. 😉

Here are photos from the Bench/Uncut Denim & Underwear Show held last July 2, 2010 at the Araneta Coliseum. Many thanks to Photographer Fritz Tentativa and his website. Enjoy!

Comedienne Pokwang and her posse'

JC de Vera with the gorgeous Georgina Wilson on the right.

More of the Bench models who provided the sizzles!

They may not be the main models but they certainly gave the show more spiciness!

The underwear models who did the Africa segment.

Jake Cuenca closed the show, but I couldn't post his more revealing shot after removing the huge cape and classic brief. LOL!

Once more, thanks to Mr. Fritz Tentativa for the images above. If you want to see more, you can click HERE. 😉

I just have to pitch in for the launching movie of comedienne Eugene Domingo – “Kimmy Dora.”  The trailer is one of the funniest I’ve seen in a local movie for a long time now. And since I am a fan of ‘Uge” (Eugene’s nickname), I will surely watch this one. It opens today – nationwide, that is. 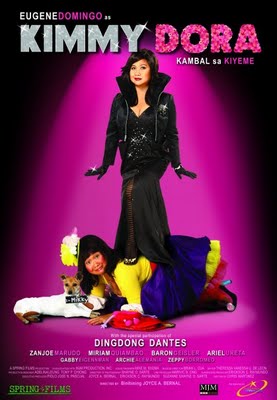 Click on the full trailer below and I’m sure it will tickle your funny bones to no end.