Vanessa Saliba: On the wings of a (pageant) dream 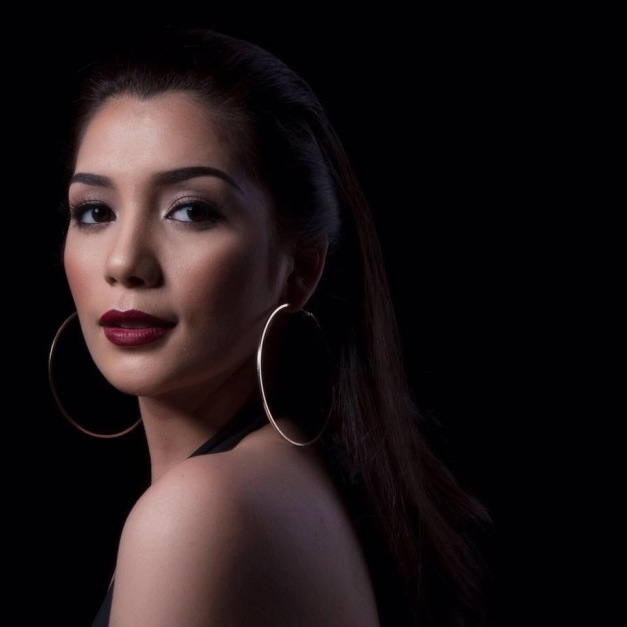 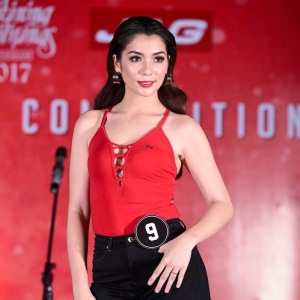 You’ve seen her compete in two editions of Bb. Pilipinas. The first one was back in 2014 and the latest last 2017 when she made it to the Top 25 cut. Since then, she focused on work first when she applied for, trained and successfully became a Flight Attendant for Air Asia – a job which she is doing up to the present.

Vanessa Saliba is now 24 years old. She is seriously considering joining one last time to see if third time could be a charm. And this Fil-Lebanese is getting herself psyched up for the possibilities. She knows that there are risks to consider, but if the dream to win a good crown is strong enough, then she will defy the odds coming her way.

Exclusive! A Day with the Binibinis at David’s Salon Academy

Team normannorman.com was all accounted for!

The whole of Monday was literally spent by team normannorman.com at the David’s Salon Academy in Makati City where Joy Arguil, Joseph Gerard Jose and I bonded and took photos with the Binibinis of Bb. Pilipinas 2017 upon the exclusive invitation of Marketing Manager Lotte Villarosa-Agraviador. The event started with a short lecture on the role of the salon company in the nationals, followed by delightful games that were gleefully participated in by the ladies and the stylists. Right about lunchtime, everyone was treated to a simple but yummy buffet before the pampering sessions started. Everyone was treated to relaxing back massages, mani/pedi and foot spas that were accompanied by cool loot bags that contained products that will help them maintain healthy hair and nails.

Hair and Make-Up consultations were also made with the assigned stylists for each Binibini and were given experimental approaches as to what facial applications best suit them. And to cap everything off, David’s Salon owner David Charlton dropped by to have group photos with the ladies and even brought them easter egg chocolates which came all the way from London.

The Binibinis had HMU consultations with their assigned stylists

The Binibinis were also given pampering back massages, foot spas and mani/pedi

It was fun all throughout, especially for your blogger who really took the opportunity to spend quality time talking to almost everyone. I can now safely say that this is a 99% cool batch of ladies who have the right attitude and personalities to compete for the crowns at stake. Why did I say 99%? Well, you do the math. No batch is uber perfect since there will always be an odd one out in terms of chemistry with everyone. I won’t name a name anymore since she is just one different apple in terms of character and disposition. Who knows, she might still improve her ways and turn out good in less than two weeks’ time.

Allow me also to point out the quality bonding I spent with random Binibinis. I say random because I caught them by their lonesome at given moments and the initial pleasantries turned into more meaningful chats in the process. Big shoutout to #Binibini2 Arienne Calingo, #Binibini19 Rachel Peters, #Binibini20 Christa Borja, #Binibini21 Jamaica Ambal, #Binibini23 Arah Salientes, #Binibini31 Katarina Rodriguez, #Binibini32 Charmaine Elima, #Binibini33 Istie Cequeña, #Binibini37 Sammie Anne Legaspi and #Binibini39 Elizabeth Clenci. I loved practically all of them, though! 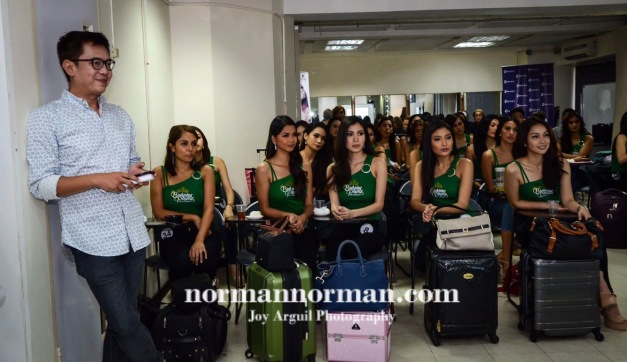 Till our next event, Binibinis!

Back in 2014, Vanessa Saliba was still a fresh-faced 18 year-old newbie in the pageant scene who signed up for Bb. Pilipinas as an Independent. Now, the more beautifully leveled-up young lass has returned to the nationals, armed with all the training and development sessions she went through with Aces & Queens. She knows better than to be just one of the pretty faces. And she now possesses a more distinct confidence amd maturity to step up to the demands of the competition as your Binibini 9.

Here is what Vanessa shared with me:

“I am Vanessa Saliba – of Fil-Lebanese mix, 21 years of age and representing Tanay, Rizal. I graduated from Our Lady of Fatima University with a degree of Bachelor of Science in Travel Management. I’ve worked as an sales associate in a company that supplies interior design finishes and now I am working as a print and fashion model.

I am so happy to be an official candidate of Bb. Pilipinas for the second time around and I am so overwhelmed with all the love and support I have been receiving from my family, friends and supporters. This time. I am more prepared because of the trainings and guidance of my Aces & Queens family. Believe me, I am most ready to get one of the crowns. 🙂”
courtesy of Beauty Pageant Updates

For the terno competition of Bb. Pilipinas 2017, Vanessa will be dressed up my friend-designer Claiza Bihasa who is making a truly beautiful Filipiniana with an elegant wow factor. And she is all the more excited to go through all pre-pageant events now. Will she be more successful as a second-timer?

You remember Vanessa Saliba, right? She was Binibini 37 during Bb. Pilipinas 2014 who surprised pageant watchers when – at 18 and still an independent applicant – made it to that year’s roster. That was more than a handful of experience for this young lass who just celebrated her debut months before going into the nationals.

Fast forward to 2017, and Vanessa returns to the field – more mature and stunningly beautiful at 21. As part of Aces & Queens Class of 2017, she was singled out by many during the Presentation Show as possessing one of the loveliest faces in the group. It amuses me to recall that a group of straight guys who watched the mock pageant unanimously picked her as one of their top choices. And I couldn’t agree more because she is indeed a refreshing presence especially when I approached her for some small talk then.

Vanessa will join the beeline for BPCI before Friday, along with her camp sisters. And I am positive that she will have a second serving of Bb. Pilipinas on her plate very soon! 🙂

Will 2nd time be a charm for Vanessa in Bb. Pilipinas? 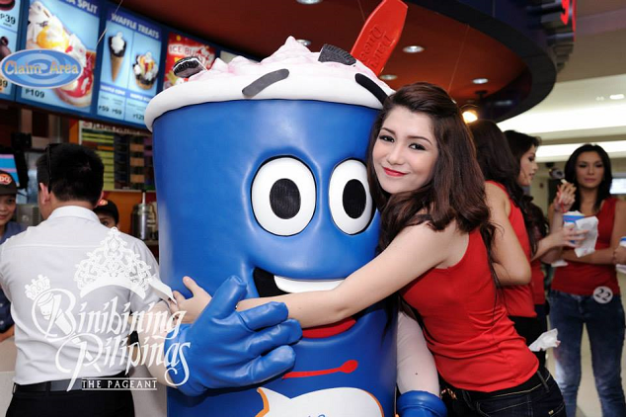 Unruly hair and all, Vanessa went on with her turn during the Press Presentation.

Outside of Ellore Punzalan, Binibini 37 Vanessa Saliba is the only other remaining independent candidate in Bb. Pilipinas 2014. And the young lady is not intimidated at all. She knows that her chances may not be as bright as the highly-publicized contenders, but she is surely enjoying the time of her life and intends to keep it that way. Should she be able to perform well during the all-important preliminaries and outshine other comers in the process, then it would some sort of vindication on her part.

With no beauty camp holding her back, she is left to her own devices and getting some hopefully well-meaninged tips and suggestions from the BPCI crew and David Salon’s hair/make-up stylists. I always have a soft spot for the underdogs, especially the ones who are being tagged as the least likely to leave a mark in the competition. On a leaner year, I would give her a solid outside chance of making the semis. But for now, the field is just so fierce that even some of the strongly-assessed ladies are starting to get unconsciously sidelined.

Be that as it may, Vanessa still deserves wishes of good luck in the coming weeks. It’s already the 1st of March. And in less than a month from now, our new Queens will take centerstage. 😉 Vanessa during the Talent Competition of Bb. Pilipinas 2014

Where is Vanessa Saliba’s web interview?

Vanessa Saliba’s web interview is the only one missing. (Photo credit: Emerson Cebanico)

Of the forty (40) Bb. Pilipinas 2014 Official Candidates, Binibini 37 Vanessa Saliba is the only one whose web interview remains unaccounted for. Was the recorded video spoiled? Was she a no-show during the day of taping? Was there no handler to take care of things for her?

Sometimes, the disadvantage of being an independent candidate becomes more pronounced once in the thick of pre-pageant activities – just like during election time when the indies have to worry about everything.

I expect her video to show up within the next 24 hours. Otherwise, she is definitely losing a lot of social media mileage. And we don’t want her Binibini experience to be less than memorable, right?

And only one (1) will be chosen as Miss Talent to be announced on March 30. I have a feeling it will be one of the vocalists getting this one. 😉

Bb. Pilipinas 2014: The ladies we see little of

Joana, Krystal and Sarah are not the most prominetly-featured candidates. But who knows? One of them might turn out to be a surprise. Or not.

KC, Vanessa and Leona are just as missed as the three ladies above in Bb. Pilipinas 2014.

What’s Valentine’s Day without sharing the love? And so, I would like to share some (plus a dash of attention thrown in for good measure) by featuring six ladies among the forty (40) Bb. Pilipinas 2014 Official Candidates who have not been getting as much blog-time, be it here or in other sites. This line-up wouldn’t be where they are standing now if they did not qualify to become beauty contestants or Top 40 placers at least.

Joana Angelica Romero, Krystal Alonday, Sarah Asido, Krischelle KC Halili, Vanessa Saliba and Leonalyn dela Cruz are taking the pageant just as seriously as the rest. For starters, they do not look at themselves as plain fillers. They want to show everyone that they can also keep up with the popular candidates by making their presence felt one day at a time. However…

Similarly, Krystal Alonday and Sarah Asido are almost always preceded in attention by Bulacan province mates Vessica Sambo and Jeslyn Santos. I’m sure they have something planned for the next pre-pageant events so they can get the spotlight more often.

On the other hand, KC Halili appears to be the least visible among the dazzling dozen of Aces & Queens. Perhaps, she is more of a silent attacker?

Last year’s debutante, Vanessa Saliba, seems to be happy projecting in the background than standing up front and keeping her stand. I hope her disposition is not to simply go through the motions and charge everything to first-time-big-time pageant experience.

And pretty Leonalyn. I am positive that she is turning on the charm all the time. But is anyone biting long enough to keep the stare and wait for her next move?

It is never easy joining the nationals. It takes the most iron-clad of guts, the most impenetrable grace under pressure and the most discretely-thick-skinned aura.

Will we see a sudden shift of strategy for the six lovelies?

I certainly hope so because this post is meant to challenge them. 🙂

Another pageant, another poll.

Starting today till a few days before Finals Night, you can vote for your Top Picks among the Official Candidates of Bb. Pilipinas 2014. From time to time, updates on the running results will be posted to give you an idea on who’s leading and who’s lagging behind.

By the way, this post will be sticky just for today. Afterwards, you can cast your choices in the widget on the right.

P.S. The names and photos of Diane Querrer and Sherlien Dass are no longer above after being replaced by Aiza Faeldonia and Carla Lizardo.