Now it can be told: Miss Universe 2018 was nearly pulled out of Bangkok, Thailand

In this news report by Asaree Thaitrakulpanich for Khaosod English last October 24, 2018, the hosting of Miss Universe 2018 in Bangkok, Thailand was in peril of not pushing through as the original financier – TW Investment – pulled out due to “misbehaviours” of some its shareholders. Read the entire report below:

BANGKOK — The fate of this year’s Miss Universe pageant, set for December in Bangkok, was briefly in doubt after its domestic financier was forced to pull out.

The US-based Miss Universe Organization revoked the rights granted to TW Investment, the Thai company in charge of making the pageant happen, due to shady practices the company has blamed on unethical shareholders. A replacement firm has since been found.

In a statement, TW Investment said it would no longer be involved due to misbehavior by unnamed company shareholders.

“We can’t say whether or not the pageant will be held here,” a company spokesman who answered the phone of President Thanawat Wansom said Wednesday. “But TW will not be the organizer.”

Questions about the pageant’s return to the kingdom after a 13-year absence were soon put to rest when another firm, TPN Group, was granted the rights to the pageant.

“We will organize the pageant, and we are the new sole holder of the license,” spokeswoman Nusra Poteteeralert said by phone. “The pageant will still be held. Nothing changes.”

In its letter, TW Investment suggested financial malfeasance and “unsavory behavior of some investors” was to blame for losing the potentially lucrative license.

“Some also did not forward the money from sponsors to pay for the distribution rights according to the regulations stipulated by the Miss Universe company,” it said.

The letter also accused the same insider as trying to hijack the job by making “secret negotiations” with Miss Universe to obtain sole distribution rights and take it away from TW.

Thailand has previously hosted Miss Universe in 1992 and 2005.

Earlier, a Press Conference was held in Bangkok with Miss Universe Organization President Paula Shugart in attendance plus representatives of the new financier – TPN Group – which was granted the rights to the pageant. 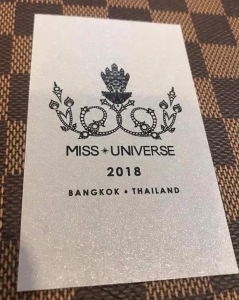 Here are important highlights for the schedule of Miss Universe 2018 which got shorter in competition period from December 2-18/19, as compared to the original start of the last week of November, 2018.

4. Judges to be announced separately as per Paula Shugart

5. Dusit Hotel Thani Thailand will be the Official Residence of Miss Universe Organization and Delegates

6. Around 95 contestants will compete