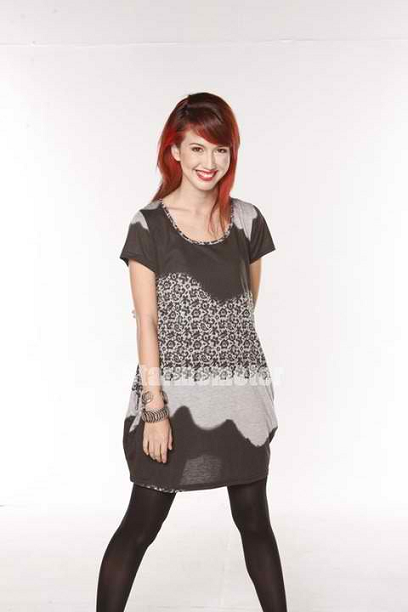 Julz Savard, as styled during the MYX VJ Search 2010 which she handily won. 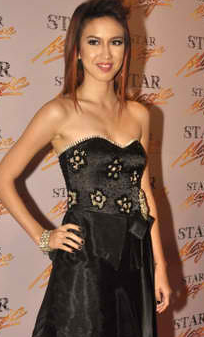 Juliann Savard, or VJ Julz to those who follow her on the MYX channel, is setting her sights on winning a 2nd beauty title. After being crowned Miss Teen Philippines 2006, she went low profile but hugged the spotlight once more when she joined and won the MYX VJ Search 2010 along with Robin Nievera and Ton Vergel de Dios. That was a year ago. Now that she has done away with the striking red hair she identified herself with as a videojock, she let loose her long tresses (now medium brown) and put on a more disarmingly feminine blue cocktail dress when she signed up for the NCR screening of Miss World Philippines 2011 at the SM Mall of Asia.

The 5’8″ mixed-breed lady is more than worthy of a candidate’s slot in the first-ever MWP. Her kind of beauty grows on you and once you hear her speak, there’ll be no question about the spunk and gift of gab that she possesses. After all, one can’t be a VJ unless she is both witty and articulate in front of the camera.

And once she makes it to the official roster, I’m certain of her chances to figure out well in the competition. I can’t make predictions yet if she will nail the crown but this much I can say….Julz Savard will add more style and substance to the same.

Here’s the dirty dozen…or better yet the chosen 12 who will vie for the winners’ slots to become MYX Channel’s newest VJs for 2010. At least two of them (1 boy and 1 girl) will be declared victorious in the latter part of July. Many thanks to MYX Philippines website for the photos of the finalists.

Get to know more about the 12 by watching MYX every Mondays, Wednesdays, Saturdays and Sundays between now and the 3rd week of July before at least two of them gets catapulted to music stardom as VJs.

For the meantime, I just want to post another image of my favorite finalist – ISSA – because this early, I will be rooting for her to win!