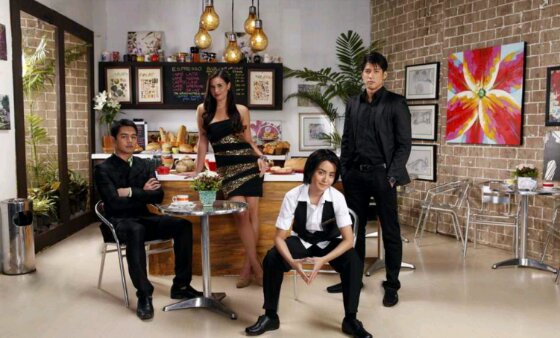 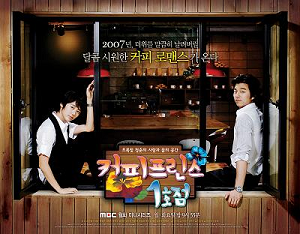 The original poster of the hit Koreanovela.

Tonight on the 3rd slot of GMA Telebabad, the much-awaited local version of Coffee Prince will premiere. The original version of the hit Koreanovela was aired in Korea back in 2007, and the Philippines a year after. Since then, talks of a Philippine remake circulated throughout various fansites and message boards. Finally, it all came together and with the loveteam of Aljur Abrenica and Kris Bernal playing the lead roles of Arthur and Andie, respectively. Lending major support to the two are Benjamin Alves as Errol and Max Collins as Arlene – two important characters in the series.

Watch Coffee Prince on GMA Telebabad. It will start at around 9:30PM. 😉

Today, at exactly 11:45AM, GMA-7’s new Sunday musical-variety show makes its premiere. Party Pilipinas, which replaces the long-running SOP, has been heavily anticipated for the past few weeks now. Aside from having all the network’s top and upcoming stars hosting and/or appearing in the show, many other artists and performers have been signed up to spice things up.

Here is the OST of Party Pilipinas’ dance theme:

And then there were two. Two winners, that is. The text votes and the Starstruck council members have spoken. During the Final Judgment at the Araneta Coliseum last Sunday night, Steven Silva – a Filipino/Chinese/Portuguese dude who resides in Oceanside, California but representing Davao – and Sarah Lahbati – a Filipino/Moroccan teener who used to live in Geneva, Switzerland and is now based in Cavite – were declared Ultimate Male Survivor and Ultimate Female Survivor, respectively. Although Sarah’s win was almost assured going into the finals, Steven’s was a bit of a surprise since his two competitors – Enzo Pineda and Rocco Nacino – were given the edge to come out victorious.

After all scores from the council members and percentages of the text votes were tallied, these two came out on top. Steven got 93.5 total, while Sarah notched 94.6 which gave them relatively comfortable leads over their closest pursuers. Enzo Pineda of QC was named First Prince, while First Princess was Cebuana Diva Montelaba.

Steven and Sarah both win P1.5 million in cash and an exclusive contract with GMA-7 worth a minimum guarantee amount of P3.5 million. The remaining contenders in the Top 5 each received P200,000 in cash plus exclusive GMA-7 contracts. A bit of good news that night was the announcement that the 9 avengers (losers in the Final 14) will also be signed by the network to exclusive contracts, thereby keeping rival stations from pirating the new talents they have painstakingly built in the last four months that the show was on air.

Below is the video higlighting the announcement of winners of Starstruck V last February 21.

This is where the real test begins for the winners and the losers. Let’s see who among them will become big stars in a year or two.

Congratulations to Steven and Sarah! 😉

From the initial cast of 7 boys and 7 girls, the Final 5 Survivors for GMA-7’s long-running reality artista search Starstruck V have been revealed and these young showbiz wannabes will try to outshine one another come Final Judgment Night on February 21 at Araneta Coliseum. They are: Rocco Nacino, Enzo Pineda, Steven Silva, Sarah Lahbati and Diva Montelaba. 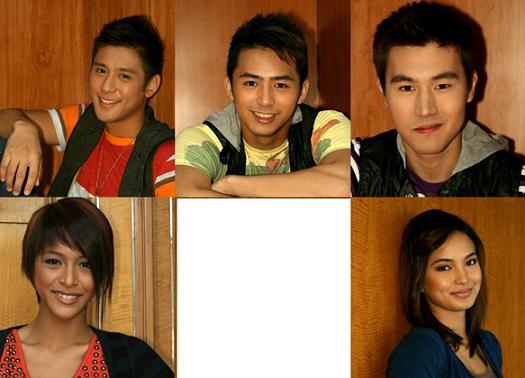 It did surprise me a bit that the shy and oft-pensive Steven Silva went into the Top 5 with the highest number of text votes (more than half a mil). He must really have a strong base of supporters who continuously back him up week after week. I would be happy seeing either Enzo or Rocco take it all in the male category. But if Steven pulls the rug from under his competitors, I wouldn’t be shocked.

As for the two ladies, the competition is probably best decided with a toss coin since their text votes and council scores are too close to call an outright winner. If you ask me, my bet would be Sarah Lahbati but gut-feel tells me that the Cebuanos will pour their all-out support to Diva this week going into the final night come Sunday.

For all their fans and supporters, you can still text your votes up until midnight of Saturday, February 20.

I just thought of extending a bit my blog yesterday about the Starstruck V Final 8 so I can share their individual shots taken by ace photographer Jun de Leon for the billboard pictorial.

Their looks have really evolved – in a positive way – from the time the show started. I wonder who will eventually be the Top Male and Top Female winners from this point on. Just the same, I’m still placing my bets on Rocco Nacino and Sarah Lahbati. Final judgment night will be on the 3rd week of February.

Starstruck V – And then there were 8…

Starstruck V – GMA-7’s reality based artista search – is more than halfway through by now with only 8 of the Final 14 left to slug it out for the Top 2 spots. Actually, they should have already been reduced to 7 last Sunday night, but the Starstruck council used their one-time power to stop the elimination after realizing that the bottom two in terms of scores and vote support – Rocco Nacino and Sarah Lahbati – are actually their personal front-runners. Thus, there is a good chance that there will be another double elimination on the evening of January 24. It might even be a triple if Ian Batherson enters the bottom three for the 3rd time and gets automatically removed from the competition.

If you have been following the show, you will know what I mean when I point out that each of the remaining 8 have gone through roller-coaster performances, week in and week out. True, the top gunners are Rocco Nacino and Sarah Lahbati, but they have reached a plateau the past two weeks and proof of that is their entry to the bottom 2 last week. I hope they sustain their drive to win, or else, Enzo Pineda and Rox Montealegre might just nose them out when the going gets tough. Or even the surprisingly strong Steven Silva (he has never been in the bottom 3 from the start) and charming Nina Kodaka (who, depsite her oft languid stance, keeps up with the competition.)

On a personal note, I got disappointed when Piero Vergara was eliminated two sundays ago. Along with Rocco Nacino, they are the two guys I expected to fight it out for the top male spot. But as luck would have it, Piero scored high on the “out” votes of the show’s fans and supporters.

Below are the two video clips of “Monsters” – the ensemble acting challenge of the Starstruck contenders together with actress Eula Valdez, directed by Maryo J. Delos Reyes and written by (playwright and Starstruck council member) Floy Quintos:

Starstruck V airs every Saturday (right after Pinoy Records) and Sunday (right after Kap’s Amazing Stories) nights on GMA-7. The 5- minute Starstruck Shout-Out Dailies continue twice everyday (one in the mid-afternoon during the Daytime Soaps and a second one in the evening in the middle of the Primetime Soaps.)

Starstruck V is GMA-7’s successful reality artista search which has already produced a good number of showbiz personalities who continue to shine in the industry up to now. Names like Mark Herras, Jennylyn Mercado, Yasmien Kurdi, Rainier Castillo, Aljur Abrenica, Kris Bernal, LJ Reyes, Katrina Halili, Mike Tan, Ryza Cenon, Paulo Avelino, the late Marky Cielo, Megan Young and Cristine Reyes are products of the same. Now on its 5th season, it promises to be the biggest and the toughest with the Final 14 contenders already announced last Sunday. Out of this number, two winners will be proclaimed – one male and one female – as Ultimate Survivors.

This early, I am posting my Top picks or favorites to win the competition:

But just the same, the show gives a high premium to text-voting so you can never really tell what the results will show despite having a council of judges and mentors who score the finalists in every task.

I would be happy seeing both Ian Batherson and Nina Kodaka finishing on top because these two have the unmistakable star factor written all over their faces. Besides, both of them have good potentials in acting, dancing and singing.