Continuing now with the second group of Bb. Pilipinas 2012 candidates… 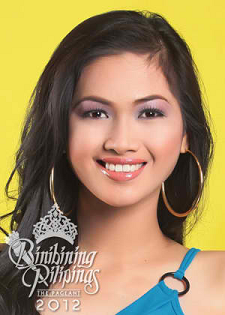 16 Liezl Alcantara, 19, 5’9”Liezl was born and raised in Basco, Batanes; a pure Ivatan since her mom hails from Itbayat, and her dad from Basco. As such she is the first pure Ivatan woman to join Binibining Pilipinas. When she joined, people told her that they couldn’t believe she’s from Batanes, because they think that people from Batanes are very “probinsyano/probinsyana” or “not civilized.” She describes Batanes as “living in paradise”. People are very peaceful and very family-oriented. The province has beautiful scenery, 0% pollution, and 0% crime rate. It’s the perfect place to relax. You go there and you feel safe-mapagkakatiwalaan ang mga tao.” She is proud of the Sto. Domingo Church in Basco and the Basco lighthouse, where you can see the Pacific Ocean and South China sea meeting.Currently a student at the Pamantasan ng Lungsod ng Marikina, she is also a part-time model. 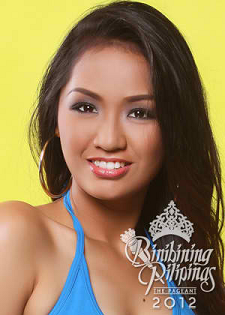 17 Anna Czarina Buenviaje, 19, 5’9”Anna is another Bicolana candidate who hails from Malinao, Albay. She is currently studying Broadcasting at Bicol University. She comes from a conservative family, the youngest of three siblings and has two older brothers. She was into archery during high school and believes that being a beauty queen is a huge responsibility. 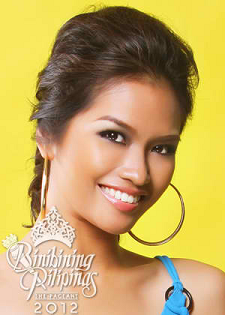 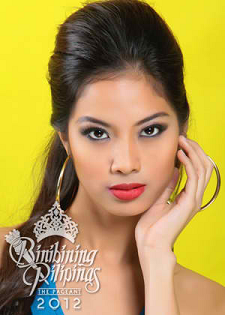 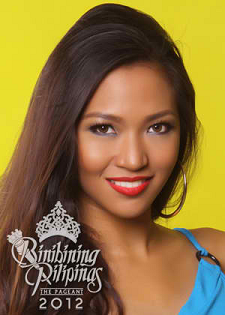 20 Roxanne Tadique, 25, 5’8”Roxanne is a Certified Public Accountant from Quezon City. She earned a degree of Accountancy from DLSU. On coronation night on April 15, Roxanne is set to graduate with honors from the Ateneo School of Law. Roxanne was also her high school’s valedictorian. It is her second time to join the pageant, the first stint being in 2008. Her other pageant experience was Ms. JPIA 2005. She loves to swim and surf. Joining the beauty pageant is going beyond her comfort zone because she believes that “you have to take a risk, and discover what you can and can’t do. The only thing to fear is fear itself.” 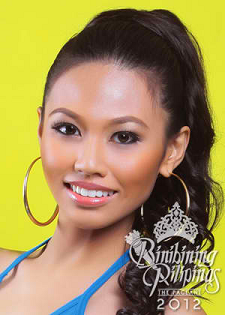 21 Giselle Angelica Muñoz, 25, 5’7”Giselle is from Parañaque City, a Political Science graduate from the Ateneo de Manila University and a law degree holder from UP although she is yet to take the bar exams. This is her first ever pageant because she wanted to do something “grand”. There was a time when she tipped the scales at 148 lbs and lost 35 lbs through diet and exercise. She wanted a lifestyle change and to be healthier. She joined the 5k Avon run and sees sports as a form of meditation. She is also into spinning and boxing. She never imagined herself as athletic but “when I was challenged, I ended up enjoying it.”

22 Meiji Cruz, 18, 5’7”Meiji is the lady from Valenzuela City. She is in her second year as a Mass Communication student at the Lyceum of the Philippines Manila. She dreams of becoming a broadcast journalist. She considers herself as a “pageant veteran” and started joining pageants as early as fourteen years old. She joined school, barangay and city pageants. She is also the reigning Bb. Valenzuela. It is her first time to join a national pageant and considers joining as a step towards gaining self confidence. 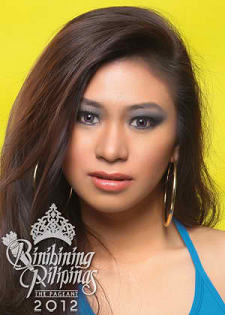 23 Goldy Baroa, 23, 5’8”Goldy is from Laguna and is a Communication Arts graduate from La Salle-Dasmariñas. For a year, she was a consultant and executive assistant in the House of Representatives. She is now into photography and has also appeared in short film in the United Kingdom “Pysche” where she portrayed the lead role. She loves music in all genres.

24 Fer Mary Baliquig, 20, 5’7 1/2”Fer Mary hails from Tagbilaran City, Bohol and is currently a 3rd year college student at Holy Name University in Tagbilaran. She is taking up nursing. She is a certified nature lover and would go to some place quiet to commune with nature whenever there is a chance. She was a track athlete in high school. She considers herself as very independent and has worked as a call center agent in Cebu to support her family at the age of 19. She feels that joining the Bb. Pilipinas pageant will help harness her skills.

25 Chloe Zanardi, 24, 5’7”Half-Italian Chloe is from Marikina City. She helps out in her family’s business and her specialty is making breakfast drinks and cocktails. Chloe loves movies and books and also loves to travel. She has been to Spain, Greece, France, US, Canada, Philippines, Caribbean. 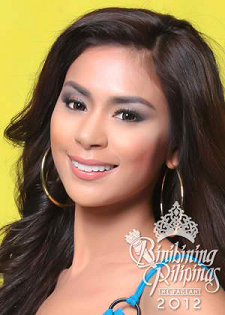 26 Angelee Claudett delos Reyes, 24, 5’7”Angelee is from Olongapo City, Zambales, and is a nurse by profession. She is currently a public information officer and part-time nurse/professor in Lyceum in Subic. It is her third time to join Bb. Pilipinas (2010, 2011) and describes herself as “very persevering.” She took classes on how to walk like a beauty queen, pose and do make up. She has also joined other pageants. She loves giving advice and reading inspirational books.

27 Golda Mae Soller, 25, 5’5”Golda, a practicing doctor, is from Roxas, Isabela. She is currently a general practitioner in the family-owned hospital in Isabela. She plans to take her residency next year and would like to be an OB-Gyne. She has always watched the Binibining Pilpinas pageant as a kid and hoped to be a candidate someday. She loves to travel and has been to Europe. She loved the architecture in Europe. 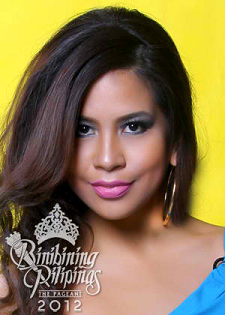 28 Marie Irisha Arcenas, 21, 5’6”This Cebuana beauty is a cousin of ABS-CBN actor Matteo Guidicelli. She took up Apparel Manufacturing Management at Fashion Institute of Design and Merchandising in Los Angeles, California where she graduated with honors. She practically grew up in fashion because her mom was into making bags and accessories for export. She went back to the Philippines to help her mom but eventually came up with her own self-named brand. She now does one-of-a-kind designs, evening clutches, gowns and resort wear. It is her first time to join any kind of pageant and sees this as a path to open doors to helping others since she is also engaged in community work in her native Cebu. Her other passions are music, specifically blues, jazz. She has no formal training in music; she is self-taught in piano and guitar.

29 Annalie Forbes, 19, 5’5 1/2”Annalie is from Malolos City, Bulacan and is a professional lounge singer who loves jazz, bossa nova, classical music. She started singing at the age of 17. Her favorite singer is Ella Fitzgerald. She is currently a first year BS Infotech student at STI Cubao. Her dad is a cab driver and she helps support the needs of her family. Her pageant experience includes Bb. Bulacan 2011, Miss Sophie Paris Philippines 2011 and Miss Makati 2011. 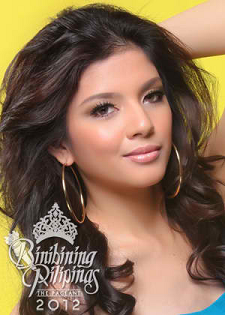 30 Sherlyn Gonzales, 24, 5’5 1/2”Sherlyn hails from Vigan, Ilocos Sur and is a Mass Communications graduate from Adamson University. She now works as an online casino dealer. She started joining pageants in kindergarten. Her pageant experience includes Mutya ng Pilipinas 2007, Ms. Expo Philippines 2008, Miss Robinsons 2009, Saniata Ti Ilocos Sur 2010. Sherlyn describes herself as an adventurer, and says, “I like going to places I don’t know about even without a tourist guide. I am the type who would literally hop on a plane and just discover the place.”

So there you go. Their heights have already been listed plus some juicy tidbits about each contender. You should have a better idea now of who to predict as winners or placers.

Of course, if you would just be more patient, ABS-CBN will be airing a primer on Bb. Pilipinas 2012 exactly one week before the coronation night. You should watch that one in order to fine-tune your selections even more. 😉

Below are some of the pictures taken from the recently-concluded Bb. Pilipinas 2012 Press Presentation held at the Genting Club of Resorts World Manila. Many thanks to OPMB Worldwide for these shots. Enjoy! 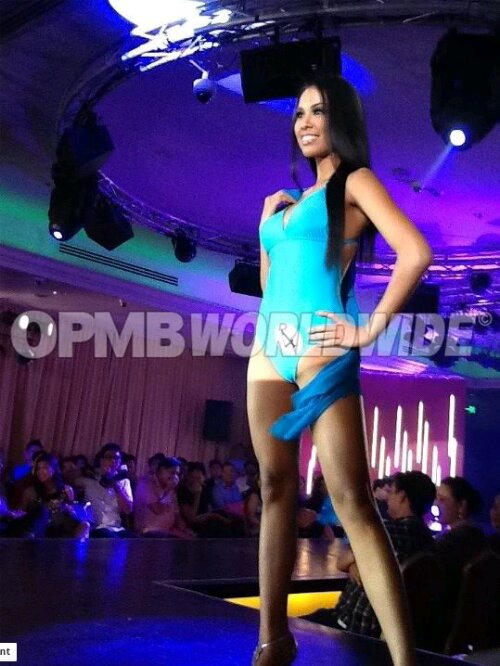 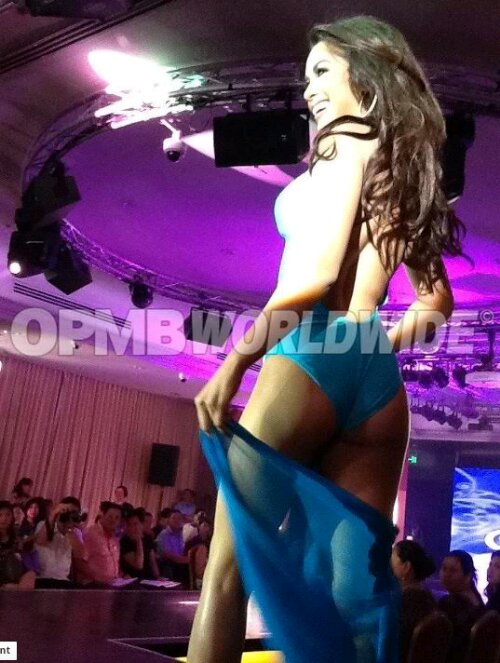 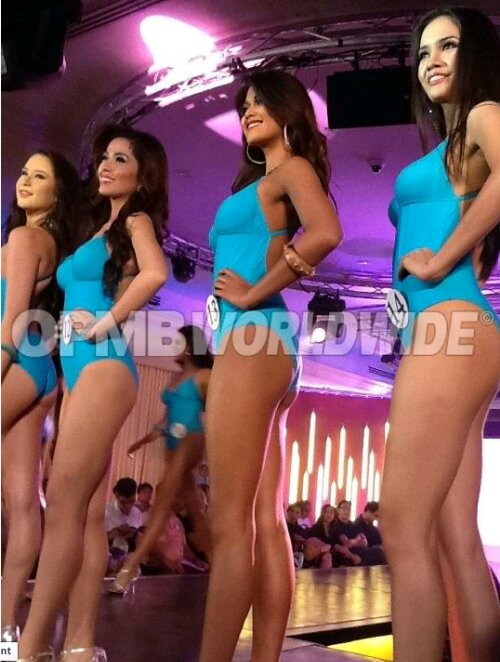 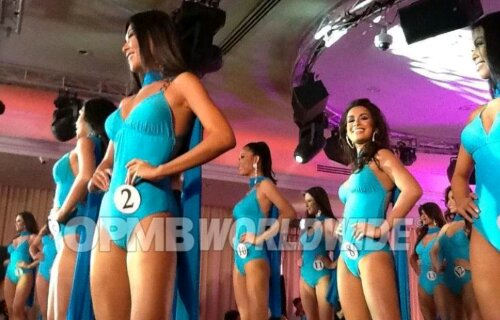 The 30 Official Candidates of Bb. Pilipinas 2012 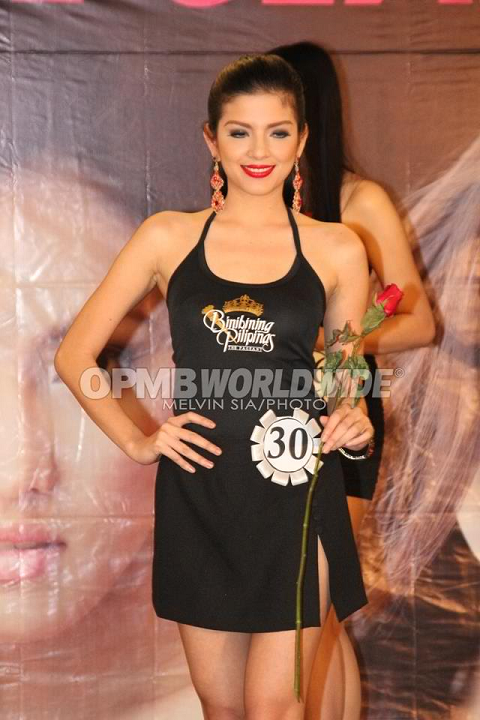 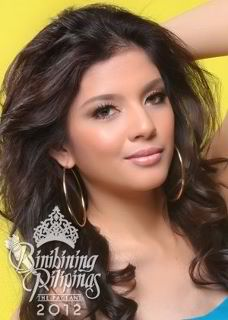 She may tail-end the Official Candidates of Bb. Pilipinas 2012 everytime they are presented in succession, but 24 year-old Sherlyn Gonzales is definitely not in the game to finish last. Having had the opportunity of joining Mutya ng Pilipinas 2007, she has more to offer in terms of pageant experience and the like. Five years since then, this Ilocos Sur representative – standing at 5’6″- has significantly improved in terms of looks and confidence. When the headshots were released the other day, she was one of those who stood out (see picture on the left) given her nicely-chiseled features and good registry for the photographic lens.

Sherlyn Gonzales as photographed by Bruce Casanova for BPCI.

The million-dollar question is if Sherlyn will take things all the way and conclude her participation in Bb. Pilipinas with a big bang. While she may possess one of the most beautiful faces in this batch, she is competing with ladies who are becoming fierce by the day. And if she relies solely on what she is endowed with, getting overshadowed will become inevitable. The finals is scheduled more than a month from now, so she’d better accelerate and start keeping pace with the favorites.

Watch out for more of Sherlyn Gonzales as she hopefully steps up to the plate for Bb. Pilipinas 2012. 😉

Bb. Pilipinas 2012: Connect the names with the faces

Have you ever wondered how the unfamiliar names in the roster of Bb. Pilipinas 2012 look like? Then check the two photo collages below and connect the names with the faces… 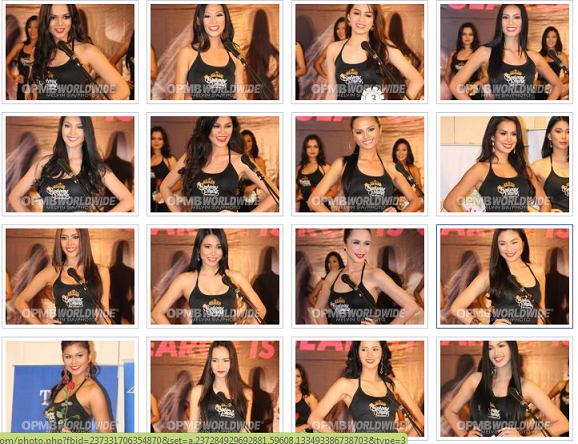 Below are OPMB Worldwide’s videos of the Bb. Pilipinas Press Launch.

Here are the official number assignments of the 30 Bb. Pilipinas 2012 candidates:

Now what do these numbers tell us? Simple. The one occupying #15 (Elaine Moll) is the tallest and from either direction counting up or down, the girls decrease in height. It also means that #1-3 and #28-30 are the shortest in the batch, give or take a fraction of an inch here and there. 🙂

After long hours of deliberation, not to mention the callbacks and oft-rescheduled final screening, the 30 Official Candidates for Bb. Pilipinas 2012 have been announced at the Gateway Suites a couple of hours back. From this list of beautiful Filipinas, three will be crowned winners and represent the country in this year’s Miss Universe, Miss International and Miss Tourism Queen International.

Who will shine bright and claim victory on April 15? Let’s wait and see as the ladies will be instantly immersed into a world of glitz, glamour and fame, with a dash of intrigue and controversy in the mix.

The Official Candidates of Bb. Pilipinas 2012:
(final numbers will still be re-assigned)

Suffice it to say that the next two months will be crucial for all the contenders. I won’t be surprised if a disqualification or two – not to mention a couple of backing-outs – can still take place before the coronation night draws very near. It has happened many times before and this year should be no exception.

Regardless, let’s all wish the ladies the best of luck!

How about you, dear readers? Happy with the selection? 😉 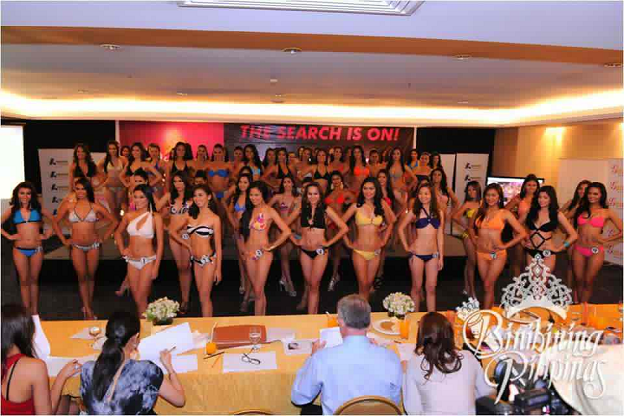 All photos below are courtesy of OPMB Worldwide 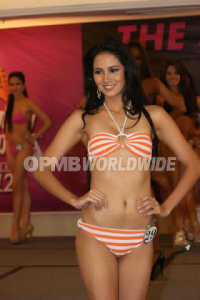 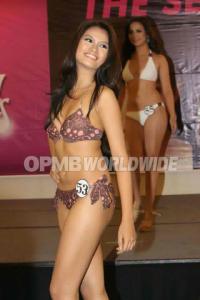 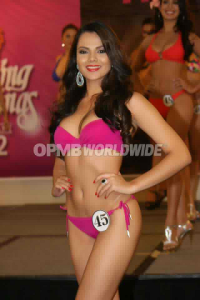 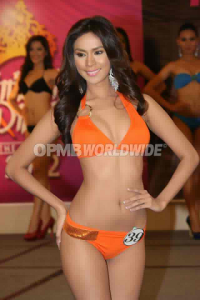 Sherlyn Gonzales: From Mutya to Binibini?

During Mutya ng Pilipinas 2007, Sherlyn Gonzales got her first taste of national pageant participation. She did win a Special Award then (Star of the Night), but was unfortunately shut out of the winners’ circle led by Zephora Mayon (abdicated) and Ana Marie Morelos.

This time, talks are that Sherlyn will make her 2nd attempt at a big-time pageant win by way of Bb. Pilipinas 2012. I still have no recent update/s on how the girl has improved since her last date with the limelight. But if we are to go by her sultry features and personal style, she should be at least twice as beautiful and ready.

Let’s wait and see if this girl will validate our sources’ claim that she will screen for Binibini. 😉