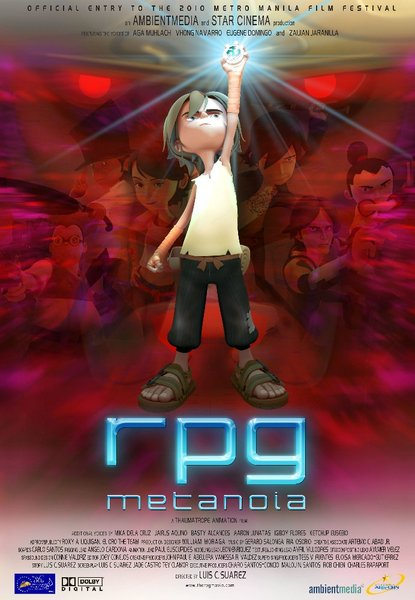 RPG Metanoia is the first Philippine-made 3D Animated Movie. And it will open on Christmas Day as part of the 2010 Metro Manila Film Festival. It is the story of Nico, a young online gamer, his friends, and their challenge to prevent the ‘unknown’ opponent in its attempt to seize the world of Metanoia and our world. Featuring the voices of Aga Muhlach, Eugene Domingo, Vhong Navarro, Mika dela Cruz and child actor Zaijan Jaranilla, this film deserves the support of moviegoers because it is definitely a solid step forward in the local film industry. Filipino animators are known globally as some of the world’s best (just check the ones working for Pixar and Dreamworks SKG). A look at the HQ trailer above gives you the impression that it is a worthy first 3D output for Pinoy Cinema.

RPG Metanoia is produced by AmbientMedia and Star Cinema and directed by Luis C. Suarez, with music conducted by Gerald Salonga, orchestrated by Ria Osorio along with Filharmonika Orchestra.