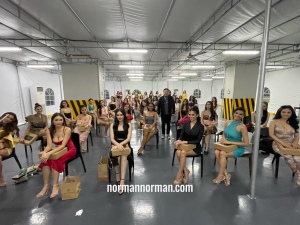 Without spoiling the Bench/ Body swimwears that the Miss World Philippines 2021 Candidates will wear on Press Presentation and the Beach Beauty Challenge, here is an exclusive* video of the 45 ladies during the closed-door swimsuit preview held at the Bench Tower in BGC yesterday.

National Director Arnold Vegafria (standing, left photo) poses with the ladies at the holding area after the closed door event.

Each candidate was gifted with a box of Bench/ lifestyle “Queenssentials” products which they will promote as part of the Multimedia Challenge of the competition.

The screening panel during the activity was made up of Ben Chan, Miguel Pastor and Bryan Lim of Bench, Ara Arida and Designer Rhett Eala.

PS You will only get to see their faces above.

* – Your blogger was the only member of the pageant media given access to the proceedings, mainly due to the closed-door nature of the same.

A Beauty Queen by Any Other Name

When the new pictorial of Reina Hispanoamericana 2017 landed in my inbox (thanks to my dear friend Voltaire Tayag of Rappler), I immediately thought of using the popular phrase “…a rose by any other name…” from William Shakespeare’s Romeo & Juliet as inspiration for this blog entry. This wonderful lady – who is always a joy to work with – decided to use Teresita as her public name right before, during and after her successful stint in Bolivia. But somehow, the showbiz affiliation is so strong that the popular nickname of “Win-Wyn” just could not be erased that easily from the minds of everyone.

Call her Teresita. Or call her Win-Wyn. She will always be our Reina Hispanoamericana 2017.

This latest photoshoot was a special one because our Queen herself had a say in every shot taken. The overall atmosphere, though, was fun and relaxed that everyone in the studio enjoyed doing all the layouts and did not mind the time at all.

Below are the other stills from the said shoot. Here are the credits first: 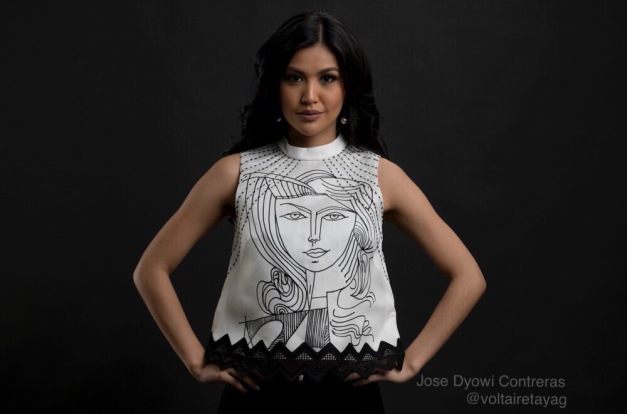 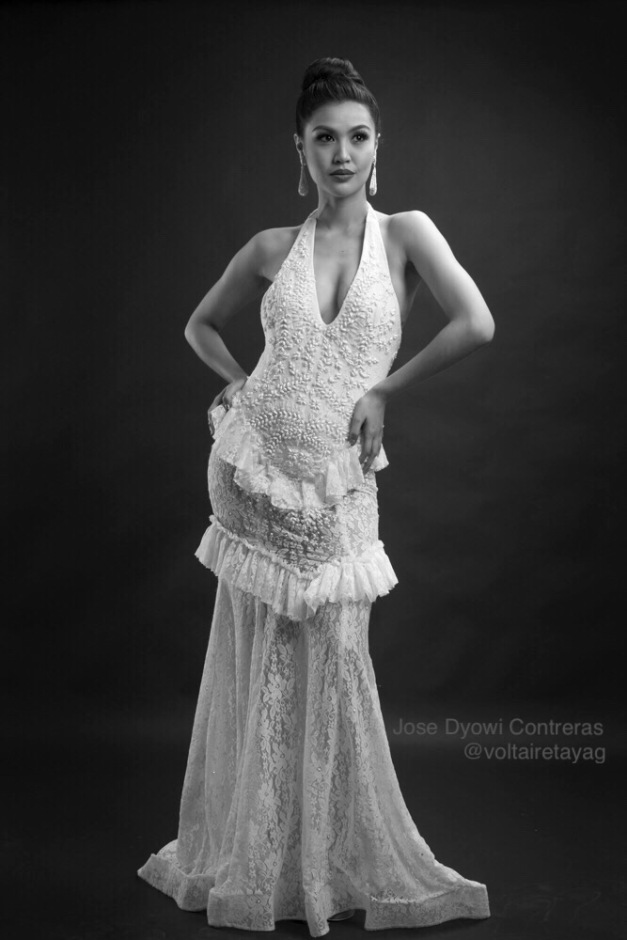 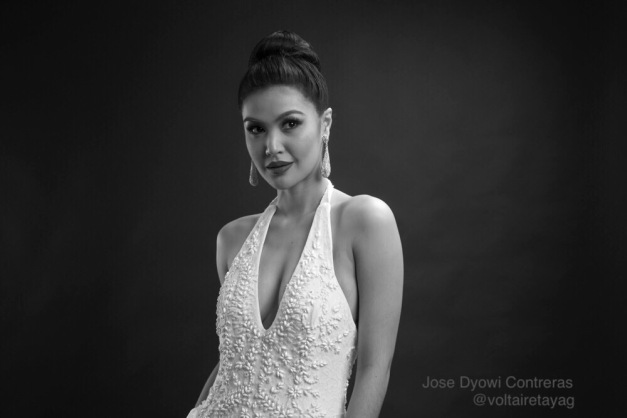 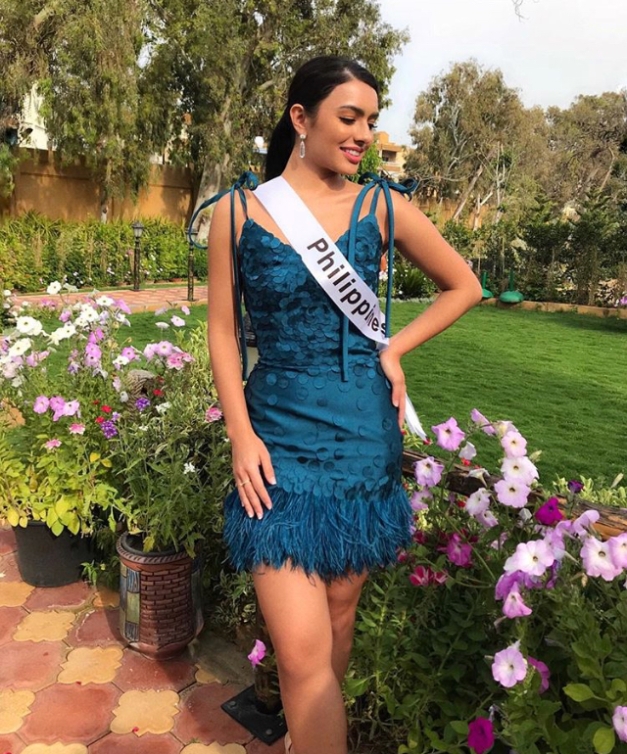 The candidates of Miss Eco International toured Alexandria, Egypt and it was such a wonderful experience for all the ladies, especially Miss Eco Philippines 2017 Cynthia Thomalla (wearing a Rhett Eala) who particularly marveled at the Library of Alexandria and the other places they visited.

Here are more photos from the said tour. 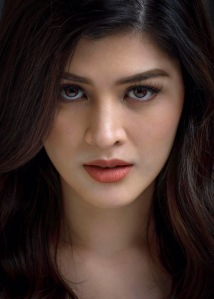 Here’s the one of the latest pictorials of Bb. Pilipinas International 2017 Mariel de Leon with the following credits:

Mariel’s date with destiny – just like the other Bb. Pilipinas 2017 Queens – is slowly approaching. We’re nearing the last month of this quarter. And by mid-October, she will be in a beehive of activities in final preparations for her trip to Japan where the finals of Miss International 2017 is set for (tentatively) November 14.

In the meantime, enjoy her latest images. Be ready for the ultimate transformation for her mission within the next two months. 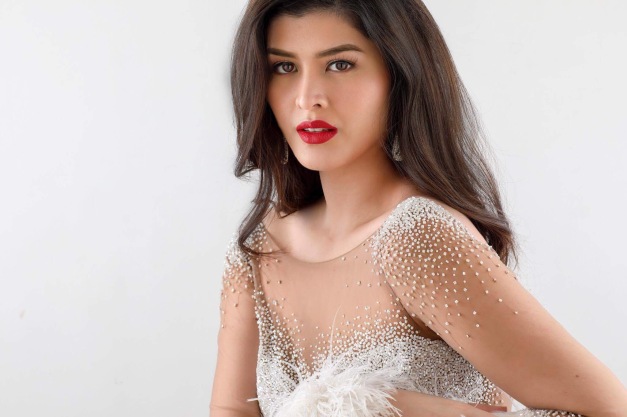 Rhett Eala and his Queen Collection 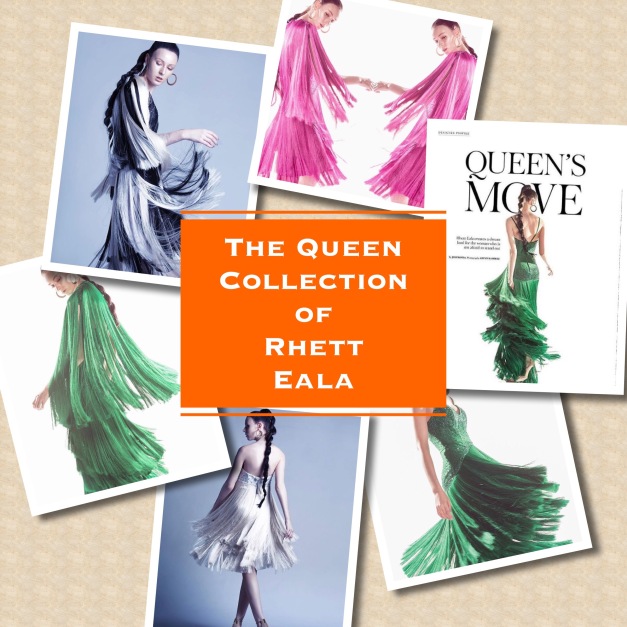 Have you leafed through the pages of the June 2017 issue of Mega Magazine with Pia Wurtzbach, Megan Young and Kylie Verzosa on the cover? If so, then you would have already seen the feature on Rhett Eala and his collection called “Queen”. By now, one particular number in this group is very familiar to all you pageant followers as the green competition gown that Miss Universe Philippines 2016 Maxine Medina wore during the all-important Preliminaries of the 65th Miss Universe last January. It may have elicited some mixed reviews in the process, but you’ve got to hand it to the Designer for coming up with a creation that moves and sways so beautifully in motion.

Photographs do not give justice to the same, unless the shots are timed while the gown is moving like the wind. Just like the photos below.

Grab your copy of Mega Magazine to see the entire line-up. 🙂 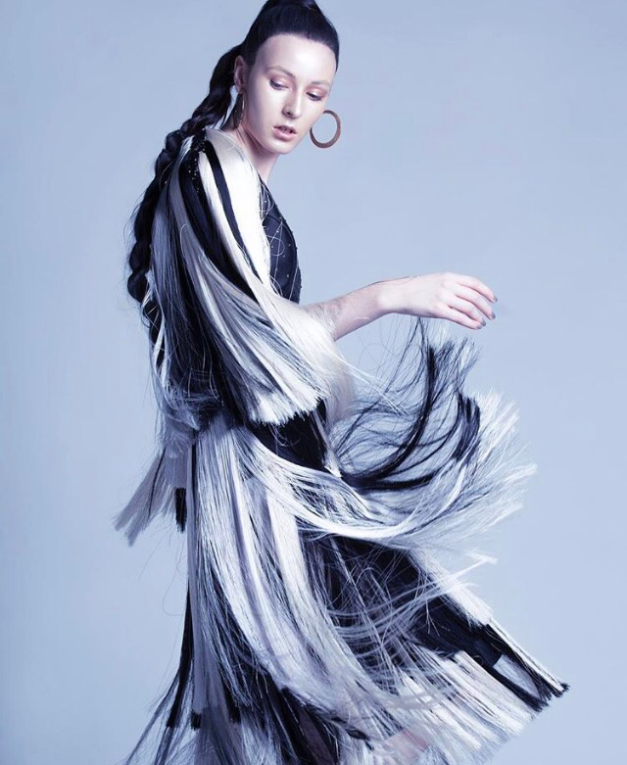 From introduction to National Costume, she really did well

Miss Philippines did everything according to the game plan. She was in her best elements during last night’s 65th Miss Universe Preliminary Competition. And with the thunderous applause that sen-surrounded all her appearances onstage, she was pumped to present herself even more convincingly in front of the panel of judges which included former Miss Universe titleholders Dayanara Torres and Riyo Mori.

Sadly, the bashers just never stop. Instead of appreciating her performance, the online comments have focused on condescending statements about the headdress of her National Costume and the mixed replies to her emerald green evening gown.

But at the end of the day, nobody can’t deny that our bet delivered. Even the bashers could not fault the way she walked and projected onstage. Such is the case when the fault-finders among us find other means to throw potshots at Maxine.

And by the way, her Preliminary Interview went very well according to a reliable source. The conversation with the panel was so light and breezy that Maxine definitely charmed her way through their hearts. 🙂

Watch the Preliminaries all over again.

True to the promise of BPCI, Filipino designers were given the spotlight during the finals last Sunday night. And prior to that, the National Costume Competition also showcased their creativity. So allow me to feature a photo blog of fifteen of the evening gowns, including the new titleholders, runners-up and the rest of the Binibinis in the Top 15. 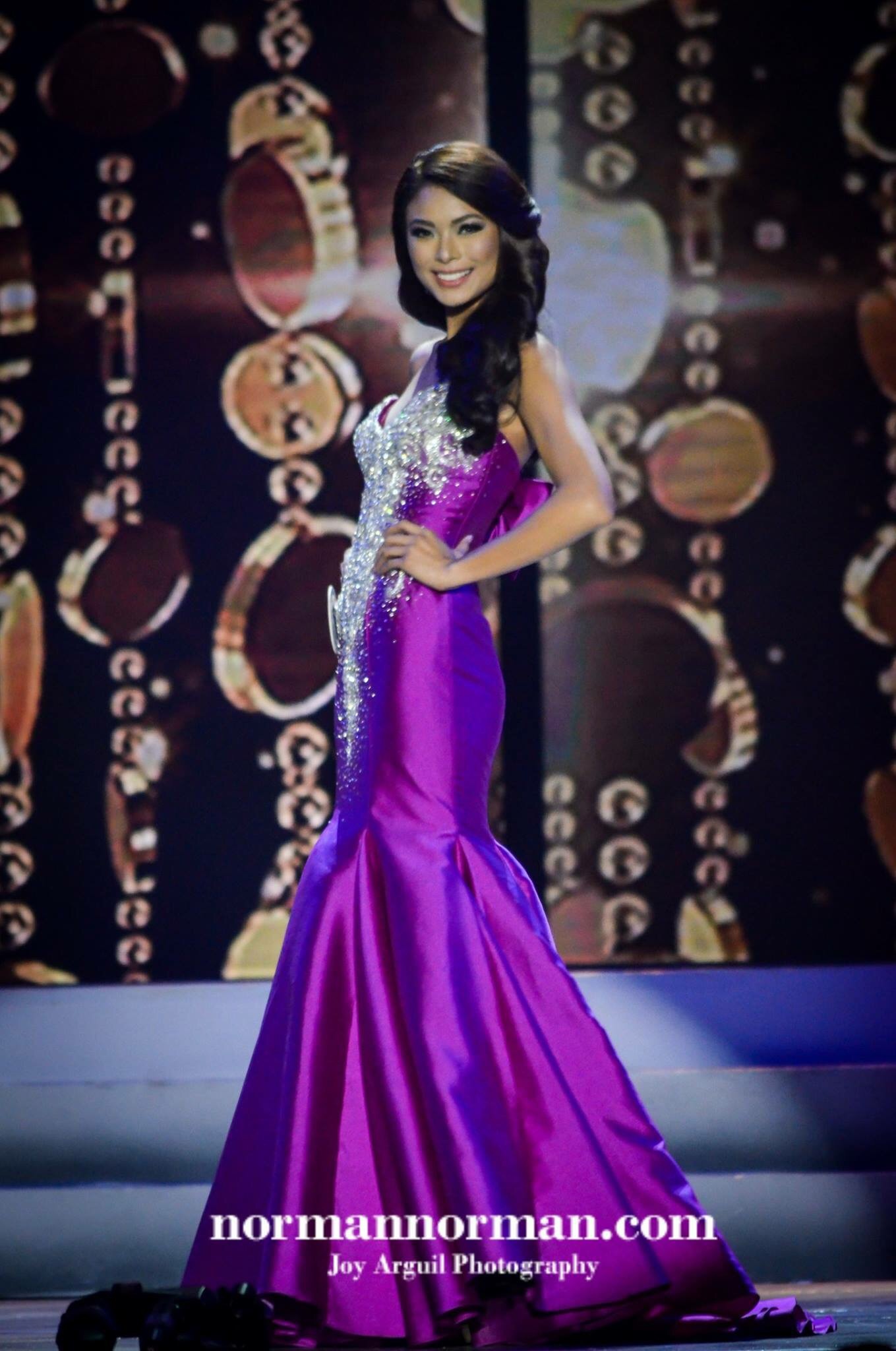 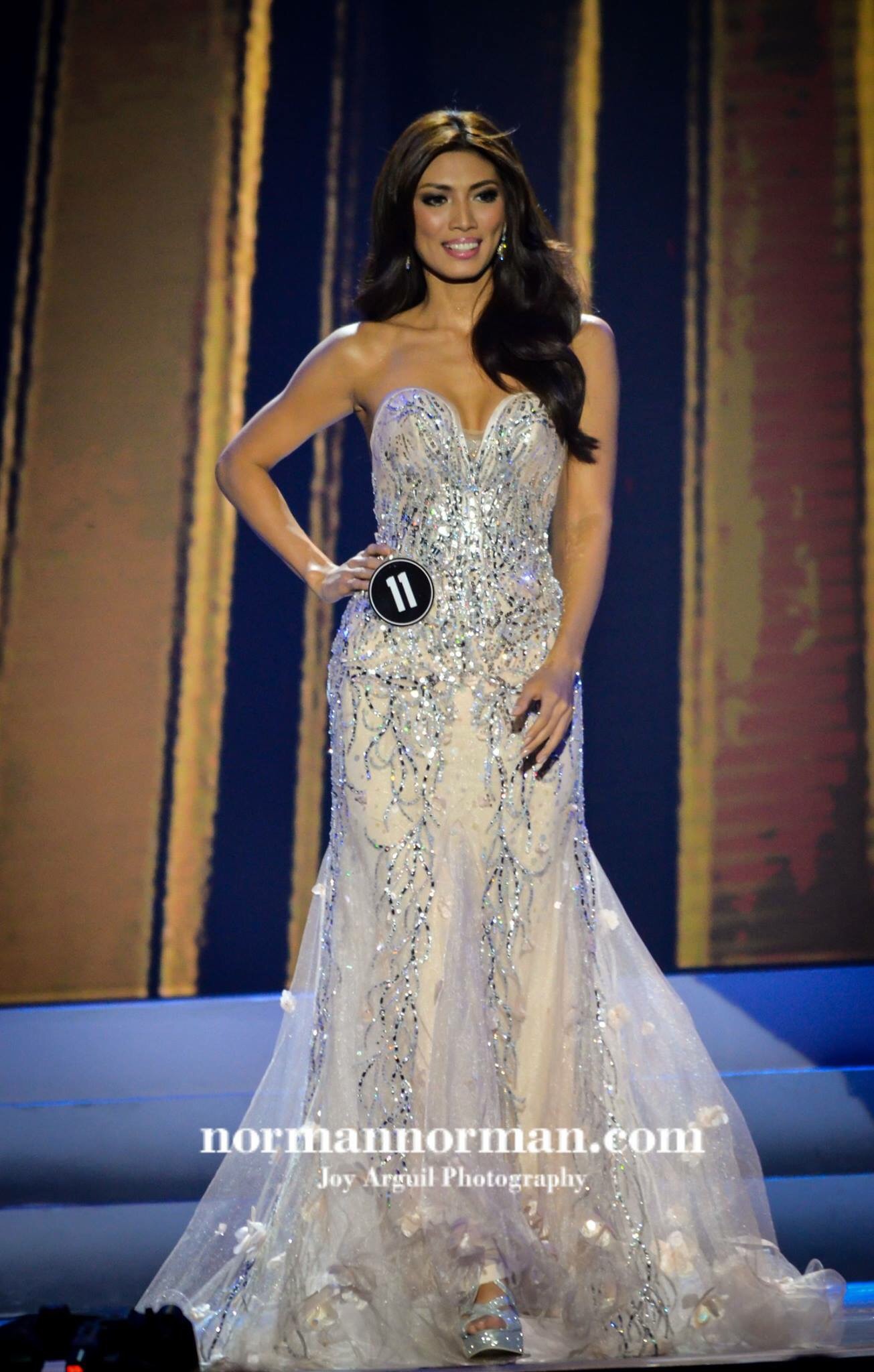 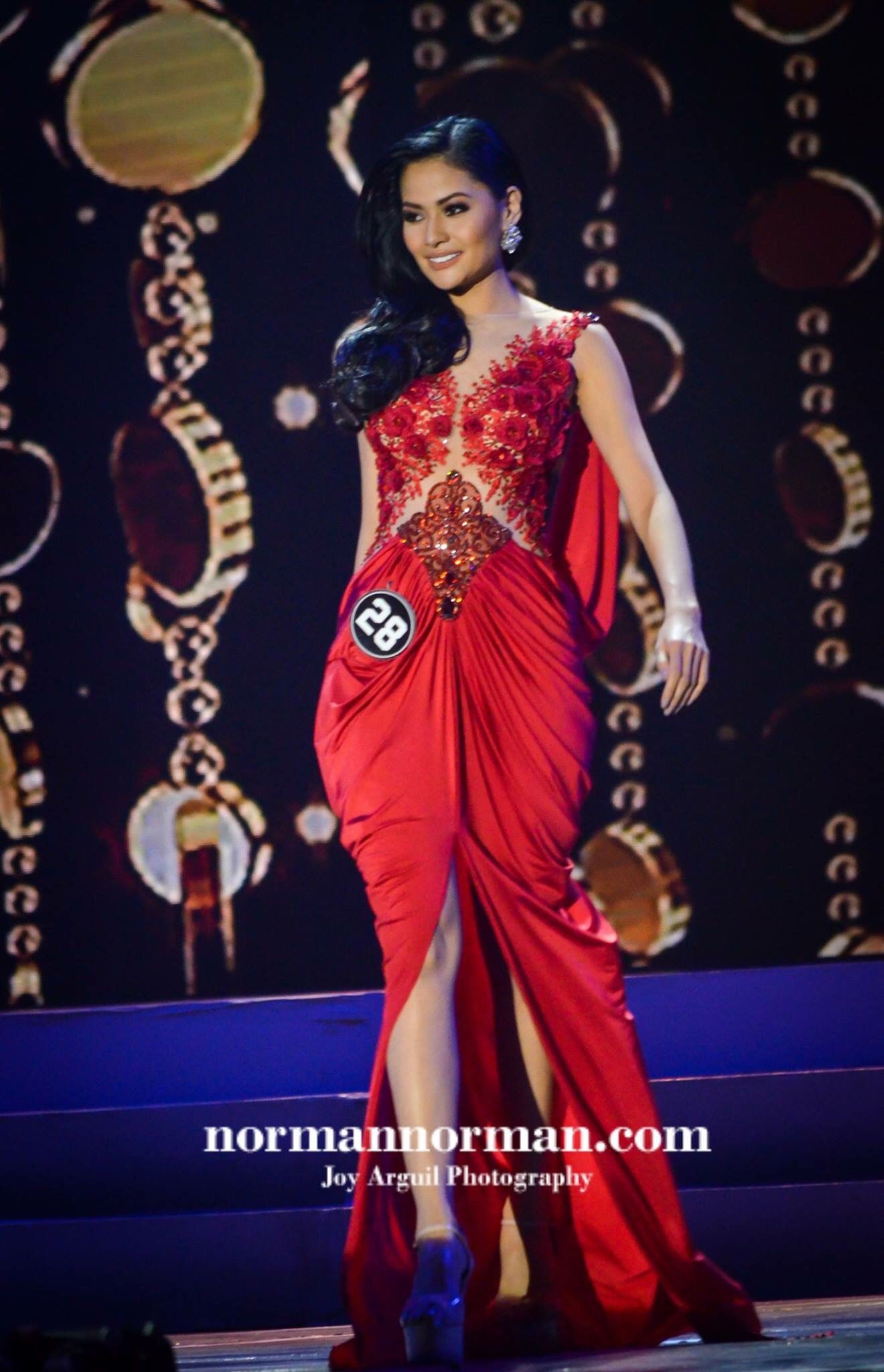 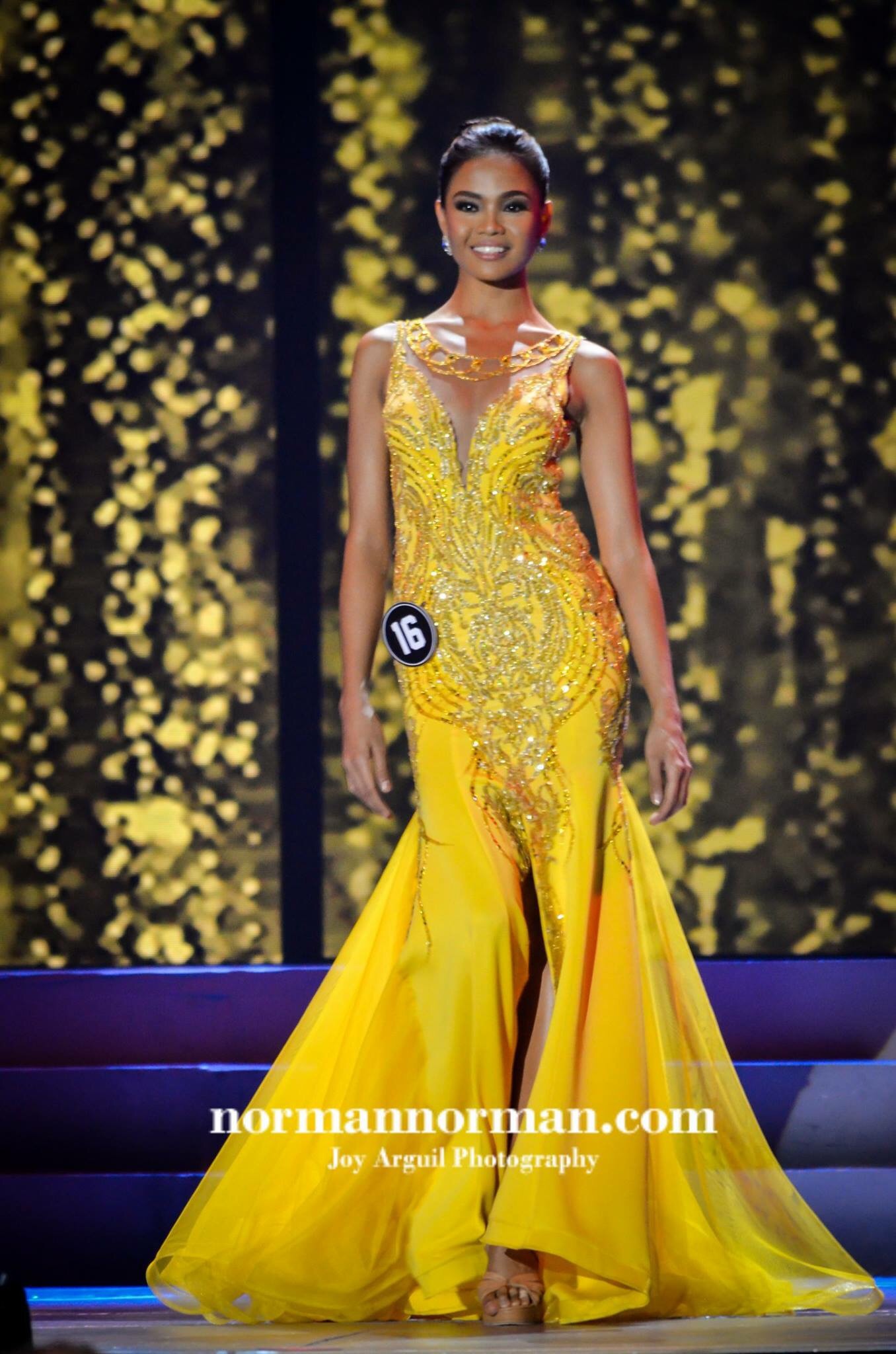 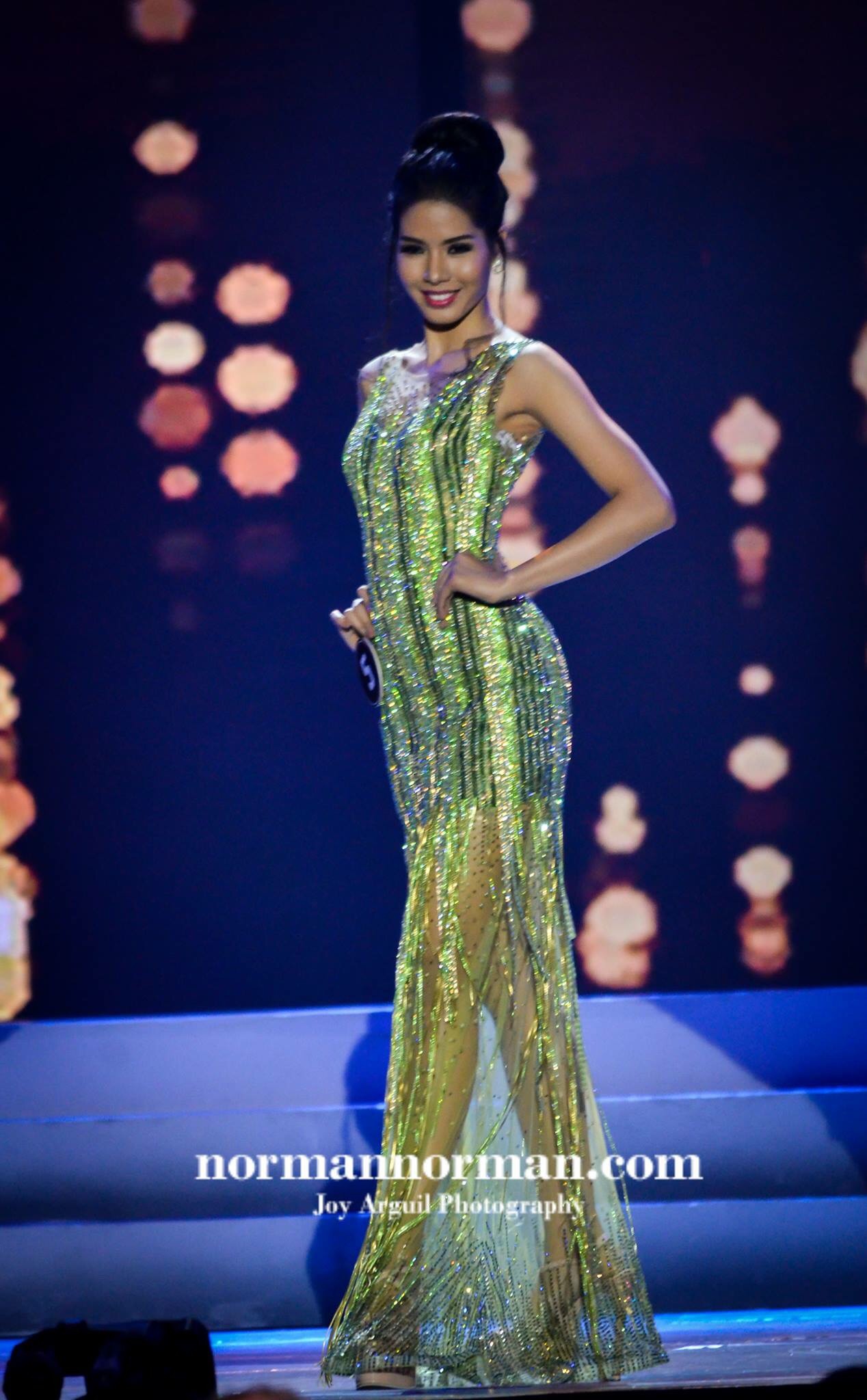 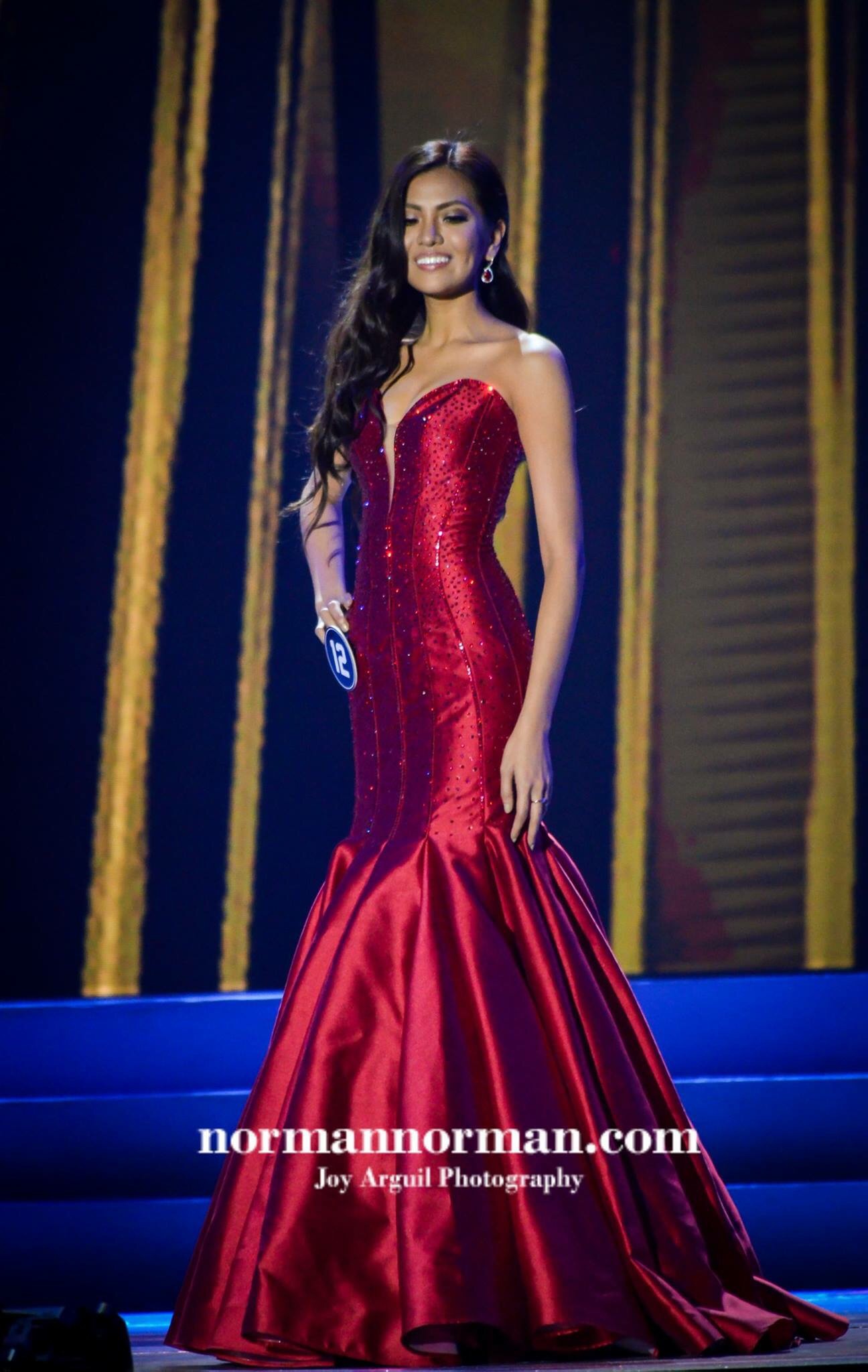 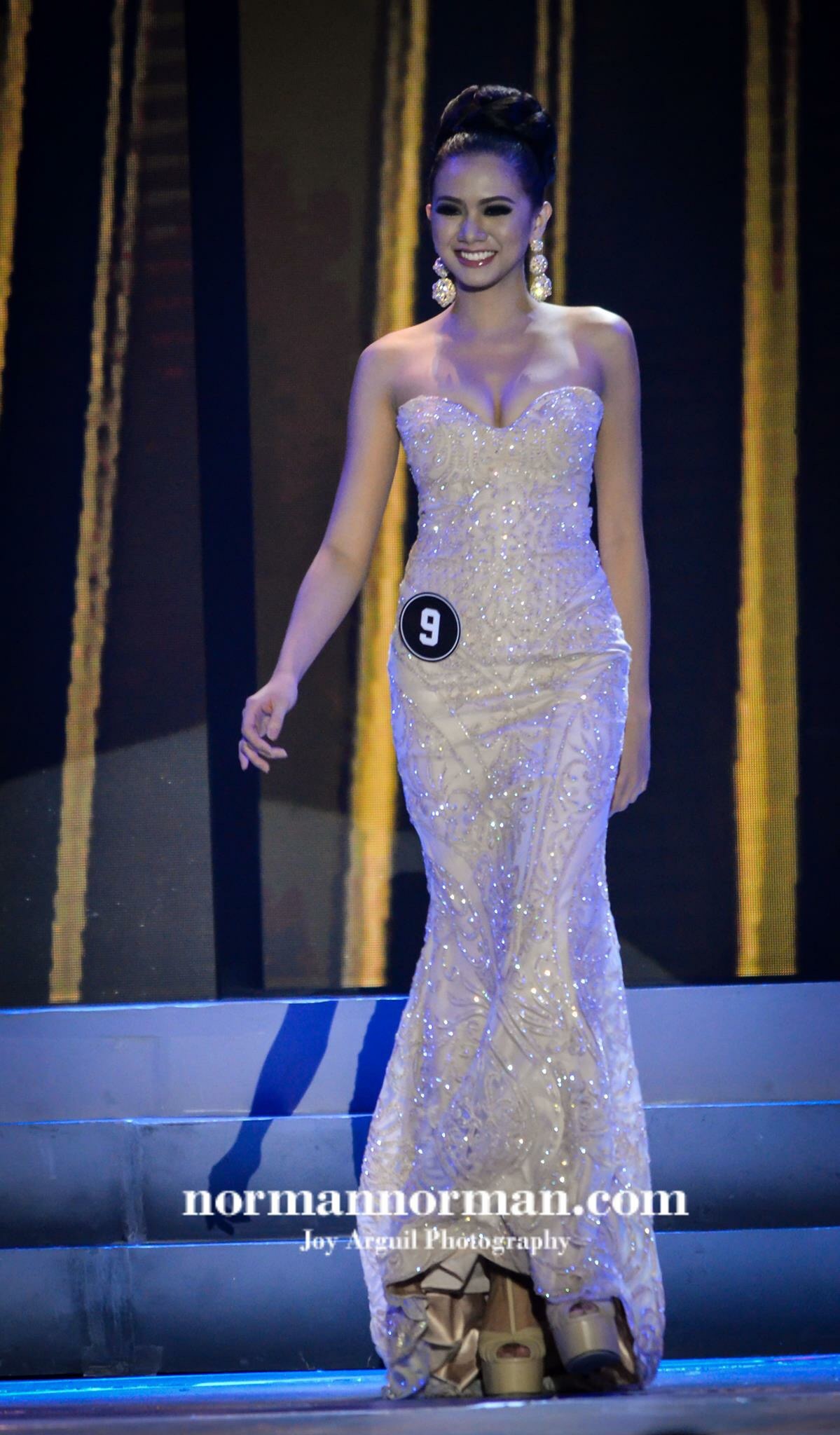 All images courtesy of Joy Arguil for normannorman.com

My Personal 5 for the National Costumes of Bb. Pilipinas 2016

It personally surprised me that the two (2) National Costumes from last night’s Bb. Pilipinas Fashion Show which took my fancy the most are the ones worn by the two bets from Davao – Binibini 37 Jehza Huelar and Binibini 15 Kristine Angeli Estoque.

Designer Xioti Chiu’s Iranun-inspired attire is just so gloriously royal in impact that – with the help of beautiful Jehza wearing the same – the complete ensemble makes me feel proud of the often-neglected heritage of our tribal brothers and sisters in the deep south. I wouldn’t mind seeing this worn by any titleholder in international competitions.

On the other hand, the Kadayawan Festival-inspired creation of Designer John Cliff on Kristine is literally a feast for the eyes, bordering on 3-D effect even. The mix-and-match of fluorescent colors entices me, such that it will definitely be a standout in the global pageant stage. 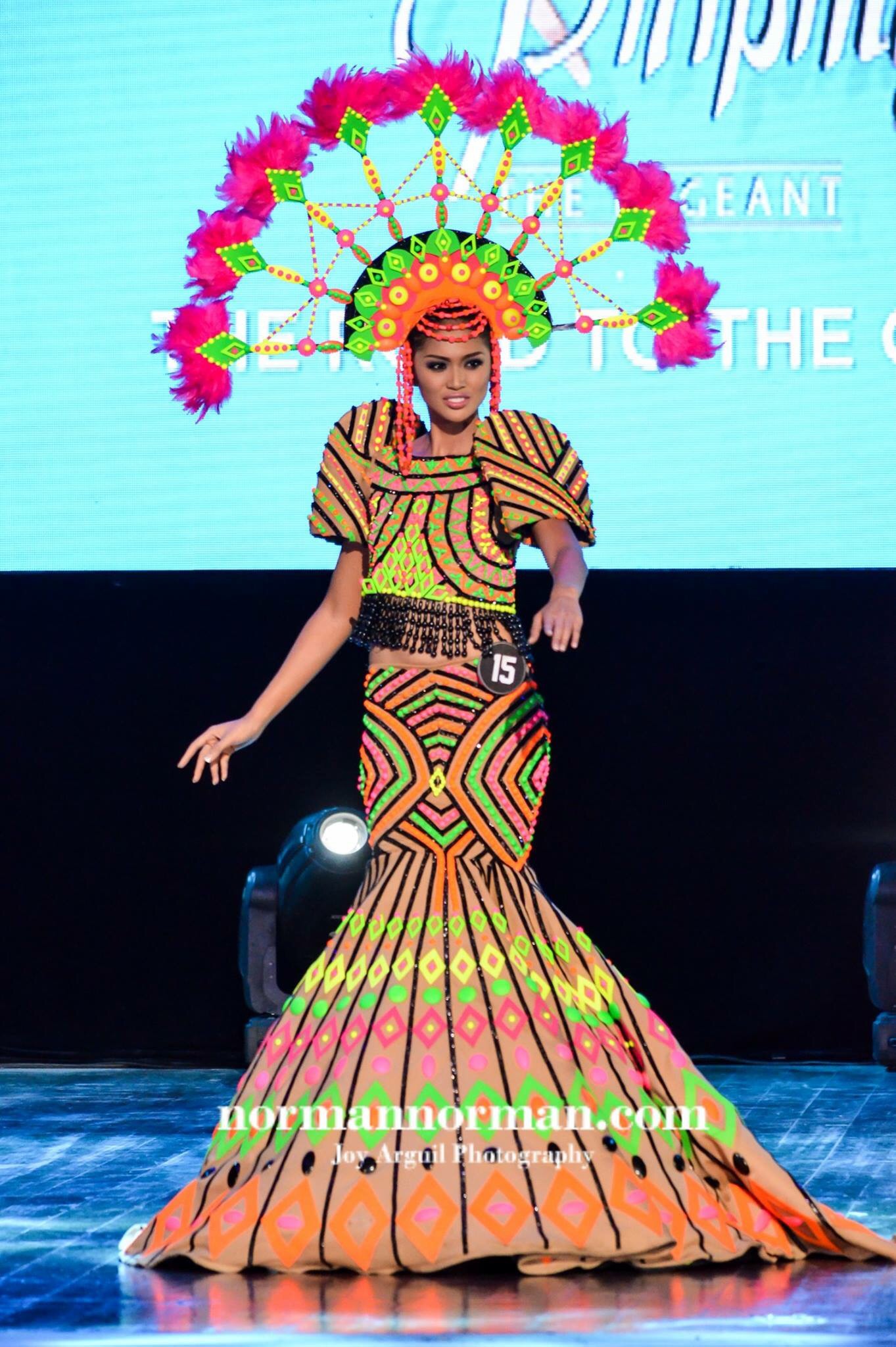 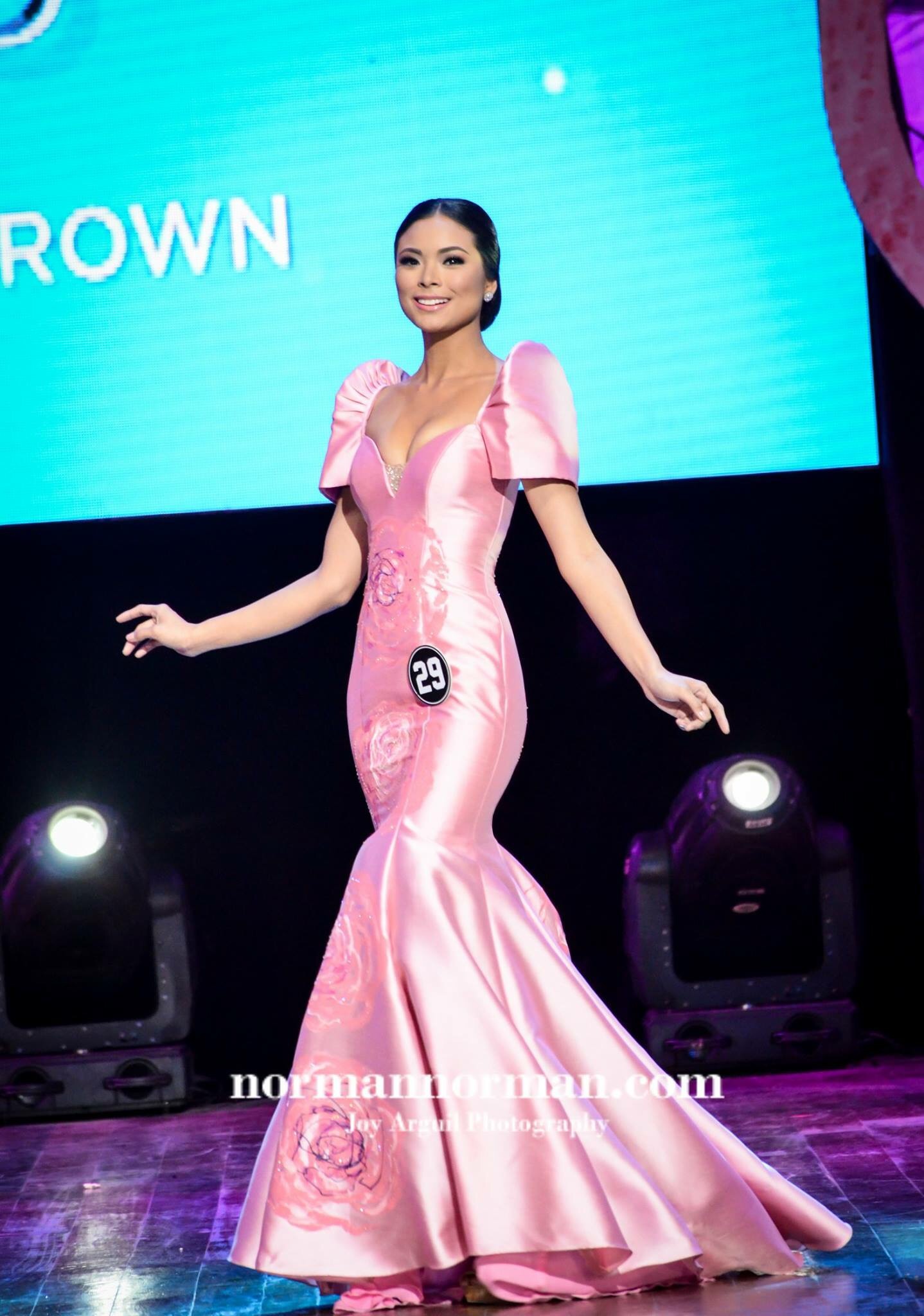 Third on my list is the blushing pink Filipiniana custom-made by Designer Rhett Eala on one of the top favorites – Binibini 29 Maxine Medina. The cut and the minimalist design are tasteful and very well presented by the wearer herself. I can see it getting good reviews abroad, even if some will find it lacking in theatrical appeal for more shock effect.

And then there is the Rocky Gathercole original for Binibini 17 Priscilla Kim dela Cruz which I believe rocked the stage last night. This has the Miss Universe peg for a National Costume written all over, if you ask me. It is edgy without going overboard, whimsical in a very modern pageant-evolving way. 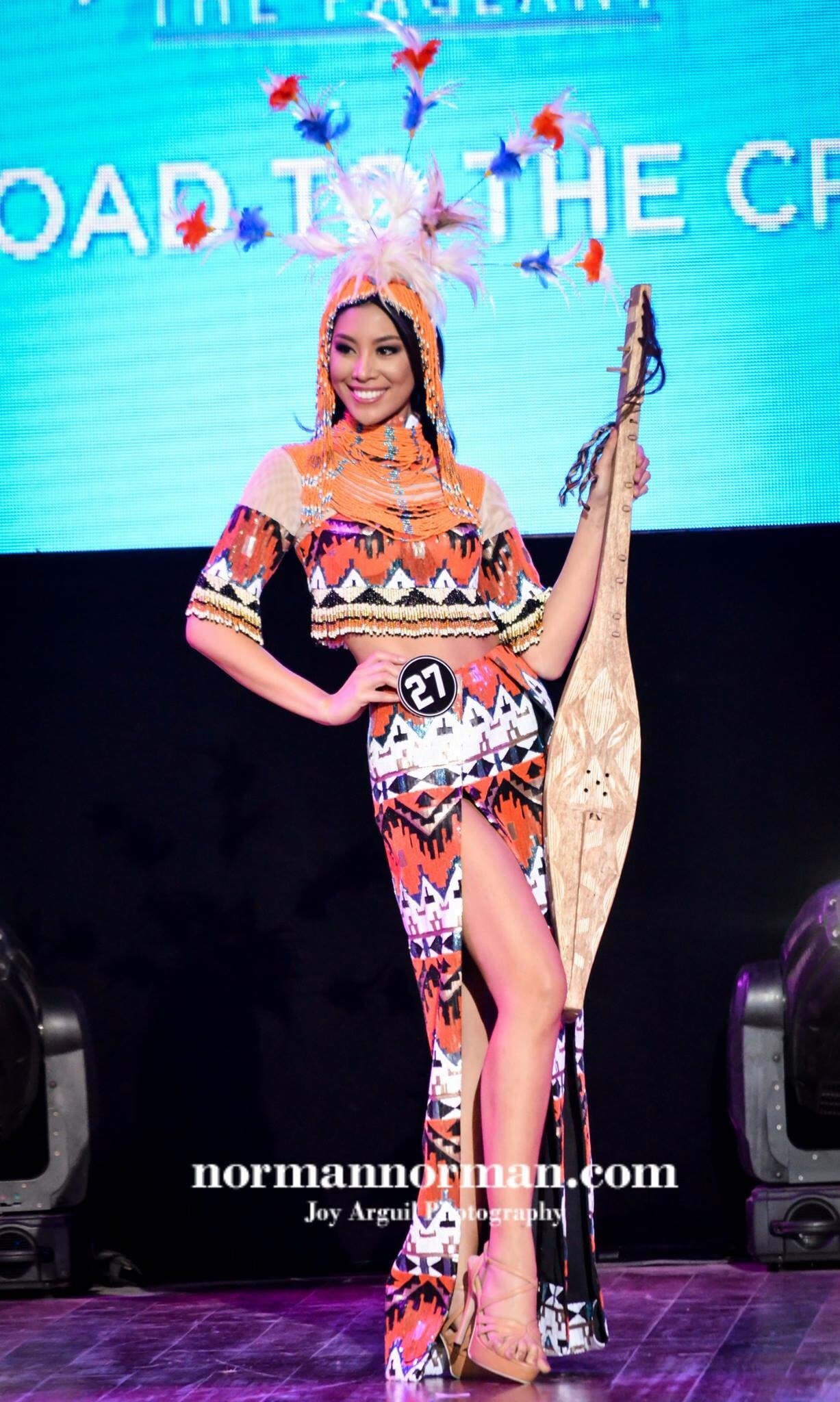 Last but not the least on my list is the one which actually made Top 6 – the Cherry Samuya Veric number on Binibini 27 Dindi Pajares which is a Bagoba/Manoba interpretation containing the right elements of old world-culture and fashion factored in. With this one included as finalist, I can already see it onstage once one of the Bb. Pilipinas 2016 titleholders will compete abroad.

So there, my five personal favorites from last night. I just wished that most of them made it on top. 😉

Marry Me at the Marriott (in one of these) 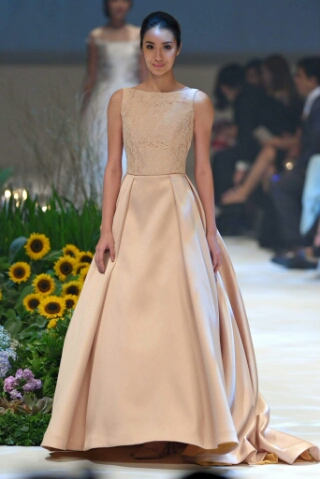 During last weekend’s Marry Me at Marriott Fashion Show, five (5) of our top designers – Rajo Laurel, Randy Ortiz, JC Buendia, Rhett Eala and Frederick Peralta – unveiled their respective bridal collections that coincided with the official launch of the Marriott Grand Ballroom which is reputed to be the biggest in the country today.

And in line with the event, I paired some of the pieces in the five different collections as worn by familiar faces in the pageant and modeling industry. Take your picks among the three pairs and tell me which bridal style would suit your taste if your were to walk down the aisle. 🙂

All images are courtesy of Bruce Casanova.

Would you go French chic with a Rajo Laurel (on Kylie Verzosa) or Rhett Eala (on Vanessa Mae Walters)?

Would you prefer non-traditional colors like these Frederick Peralta creations on Monika Sta. Maria (in black and white) and Anja-Vanessa Peter (in light mocha)?

Or will you stick to white but go all-out like the Rhett Eala flowery (worn by Catriona Gray) or Randy Ortiz quiet elegance (on Jodilly Pendre)? 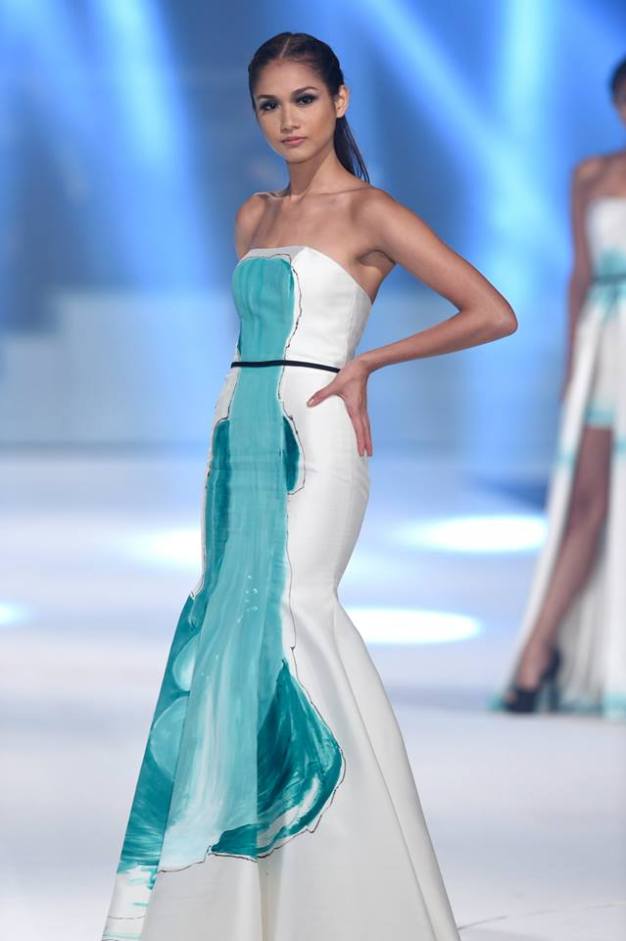 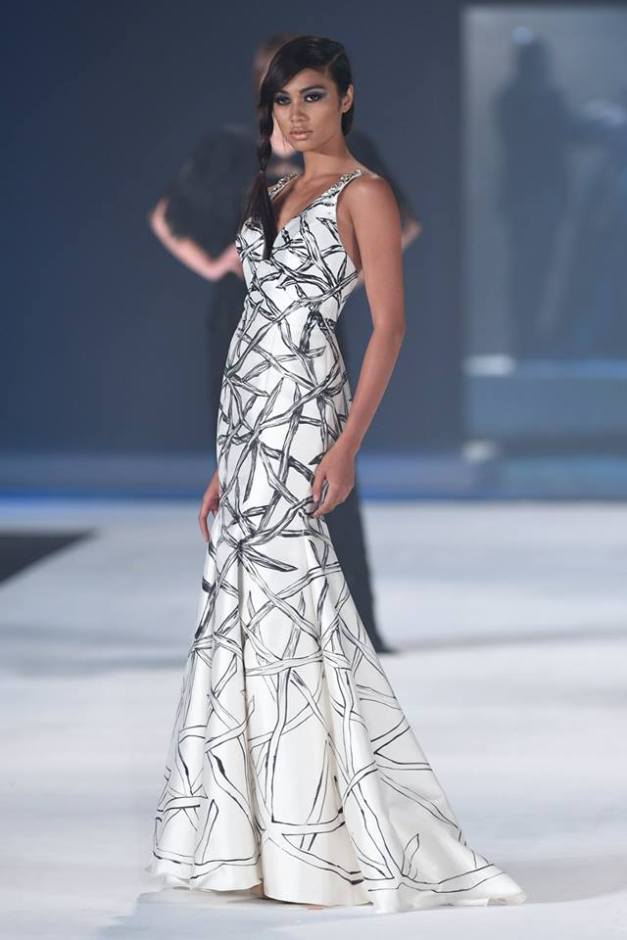