Looking for Miss U: a 2013 pageant mystery

Nothing satisfies my literary craving more than a good mystery novel. Time was when I spent most of my freshman high school year finishing off all books about the Hardy Boys in the library. Done with that, I turned to Nancy Drew after finding no interesting alternative in the selections. And then my aunt introduced me to Agatha Christie and that cemented my sleuthing interest – the more suspects, the better; the more twists, the juicier.

After Q, R, S and T, will the letter U figure out in the name of the next Miss Universe Philippines?

And so, I start my post-New Year Fireworks blogging year with a sort-of pageant-related mystery that has been lurking over our shoulders for many months now. Back in early 2012, there were superstitious-like discussions that – in order to continue the Philippines’ Miss Universe streak – the next representative should bear a surname that starts with the letter ‘T’. After the successful placements of Quiambao, Raj and Supsup, it made sense (however little) even to a few of the non-believers. Somehow, we conveniently forgot about the same the minute all the Bb. Pilipinas 2012 Official Candidates were revealed. Our focus was channeled on who had the best potential to win the top plum, instead of singling out one contender whose surname started with ‘T’. In fact, Janine Tugonon (one of two ‘T’ girls in the batch, the other one being a less-favorited Roxanne Tadique) was never a prime choice to win. But she did. And only then did some of us realized that, either by fate or sheer coincidence, we found a Miss T for Miss U.

Fast forward to 12 hours before January 1, 2013. I started sleuthing for that elusive ‘U’ girl who can continue the mystery of the alphabet for Miss Universe Philippines. I checked on all candidates of three national beauty pageants (Binibining Pilipinas, Miss Philippines Earth and Mutya ng Pilipinas) within the past five years and could only come up with three – one former titleholder (Bb. Pilipinas-World 2009 Marie-Ann Umali), the Miss Batangas in MPE2012 (Queenie Uy), and a relatively forgettable Mutya 2008 joiner (Frances Urrutia) who might already be married and raising a family by now. 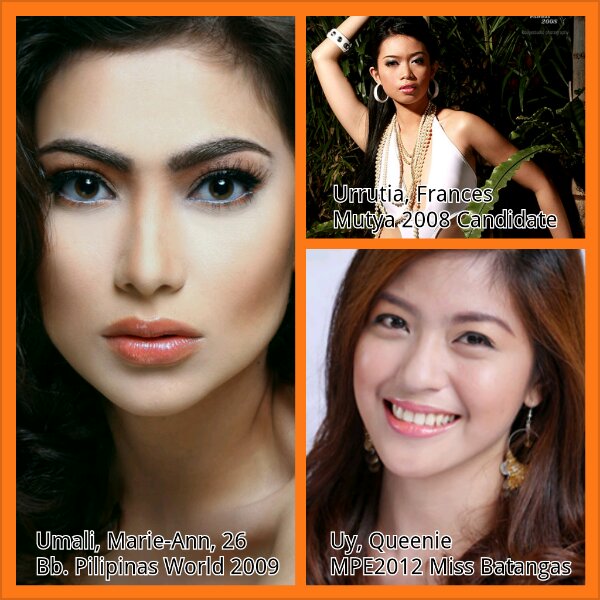 A desperate attempt to find a 'U' girl for Miss U Philippines with these 'U'dual suspects.

I know. I’m stuck at a lame corner here. I can say with certainty that a previous Binibini major winner can no longer rejoin (even if Marie-Ann’s age is still within the MU bracket). On the other hand, the Batanguena from the last MPE is definitely far from the Miss U mold we have in mind. And how about the losing Mutya-wannabe of four years back? Next!

So where do I go from here? Well, the next logical step would be to wait for the list of girls who will file their applications for Bb. Pilipinas 2013. In that group, there could be one (or two) whose surnames start with the letter ‘U’. And believe me, I will keep an eye on that one (or two), should their participation be made official by BPCI. Why? Because if the next winner complies with the condition, it dawned on me that she will be Miss “U” for the next Miss U. Am I crazy or am I crazy for even giving it some serious thought?

To complete a quartet of successful (and consecutive) Miss Universe Philippines titleholders, the only thing (or letter) missing is”U”.

At any rate, I’m no Hercule Poirot or Miss Marple so take this feature with more than a grain of salt. Consider it a playful take on the next Miss Universe Philippines. No harm in sharing the popular theory behind “QRST”! 😉

Meet the (many) Candidates of Miss Philippines Earth 2012

So we’re over and done with Bb. Pilipinas 2012. Let’s move now to Miss Philippines Earth 2012. After Carousel Productions held their Press Presentation right in the middle of all the BBP frenzy, I was never able to blog about that event anymore. Anyways, check out the following contenders… 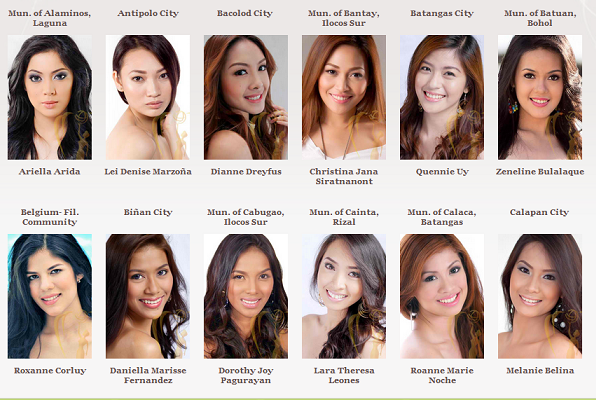 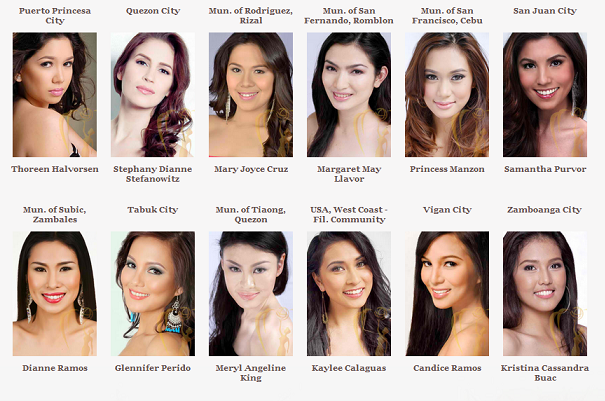 (All images above are courtesy of the Miss Philippines Earth website)

Photographic proofs tell us that the Philippines does not run out of gorgeous Filipinas joining beauty pageants. Just consider the 50 Official Candidates (only 48 are shown updated above) of Miss Philippines Earth 2012. I’m actually near-impressed with the roster this year. In fact, if not for the middling heights of most and still-unpolished qualities of some, I would say that this batch can go head-to-head with either Bb. Pilipinas or Miss World Philippines on any given day. But then again, I might be going too far singing with my praises. Let’s just follow the ladies up until the coronation night on May 27 at the SM Mall of Asia Center Stage, to be aired on a slightly delayed telecast over at ABS-CBN.

Who are your types so far? 😉