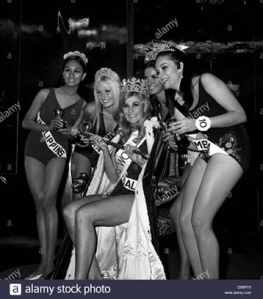 Even before Evangeline Pascual placed 1st Runner-Up in Miss World 1973, another lady had the honor of being the first Filipina to enter the Top 5 and be proclaimed 4th Runner-Up. She is Arene Cecilia “Pinky” Amabuyok (now US-based) who managed to make her presence felt in an edition of the pageant that was considered a strong one. The winner was Penelope Plummer, a gorgeous librarian from Australia.

Below is an old clip of the Miss World 1968 finals.

Pinky: Then and Now

1969-1973 was the last Golden Age of Philippine Pageants when – in that five year span – the country was able to produce two (2) Miss Universe titleholders (Gloria Diaz & Margarita Moran), one (1) Miss International winner (Aurora Pijuan) and one (1) Miss World 1st runner-up (Evangeline Pascual). Just to add a small detail, this period was preceded in 1968 by a 4th Runner-Up finish in Miss World courtesy of Pinky Amabuyok.

Fast forward to 2010 when Venus Raj clinched 4th Runner-Up honors in the Las Vegas-hosted Miss Universe. The following year saw the Philippines claiming runner-up finishes in both Miss Universe and Miss World (c/o Shamcey Supsup and Gwen Ruais, respectively). And just last year, Janine Tugonon was named 1st Runner-Up to Olivia Culpo, with Stephany Stefanowitz a close 2nd in Miss Earth and Rizzini Gomez pulling a Miss Tourism International. More than a week back, we finally bagged the Miss World crown via Megan Young, with the Mutya Datul victory in Miss Supranational adding more spice to a 2013 looking more optimistic than ever. And let’s not forget that this year’s editions of Miss Universe, Miss Earth and Miss International are still upcoming.

Are we looking at another Golden Age while establishing the Pageant Powerhouse status of the Philippines? Will the winning streak run till 2015? Or will it even go beyond that? I say yes. For sure, the element of luck will still come into play. But with the diligent training and preparations being given to our carefully-chosen representatives, there’s no reason to slide back and be relegated to anonymity anymore.

Things are definitely looking up. There’s no room for resting on our laurels. It’s full steam ahead for the Philippines! 🙂