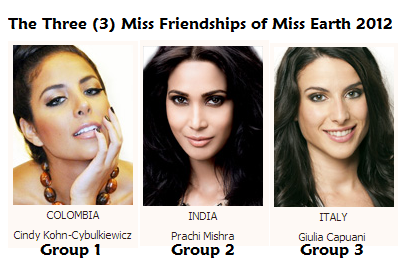 It doesn’t happen all the time that fierce competition overrides the spirit of genuine bonding and camaraderie in beauty contests. The ladies of Miss Earth 2012 prove that friendship is thicker than intrigues. And they have three (3) good reasons to back that up, i.e., electing not one, not two but three (3) of the most congenial of them all during rehearsals at Versailles Alabang last night. Suffice it to say that I adore this batch, hands-down! 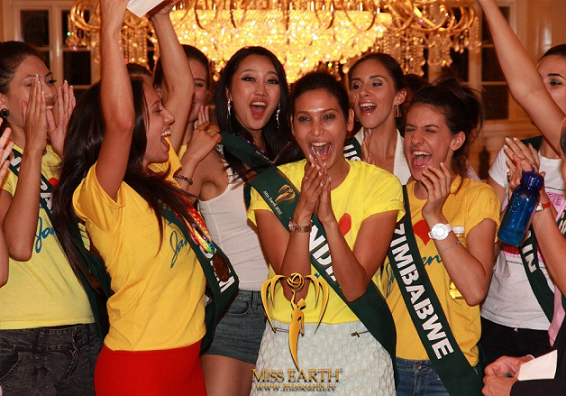 Prachi Mishra of India (center) joyously reacting (and her mates shouting in agreement) after she was voted Miss Friendship of Group 2.

Keep the friendships alive long after the competition is over! 😉

Personally, Miss Earth 2012 has been one of the hardest editions to forecast. There are factors I needed to include in order to insure a satisfactory list of predictions, least of which is the fact that the competition is being held in Manila. Being (figuratively and literally) arm-length close to the ladies makes it even harder because one cannot simply allot enough time to rub more than elbows with all eighty (80) delegates. There is always the tendency to instill halo effects on the sweeter, friendlier and more accommodating than the rest. And it can’t be helped because their varying personalities pave the way for scattered impressions. As a result, I may have incessantly veered close to the consistently warm and genuine beauties in the roster.

Another consideration was given to the strong quality of contenders this year. Just when you thought you’ve made up your mind on a shortlist, here comes a slew of initially low-profile ladies who suddenly start shining bright and threatening to give the earlier favorites a run for their top-tier rankings.

Thankfully, the introduction of various medal-earning challenges is of tremendous help in seeing the girls a little more objectively. And if could only clone myself, I would closely observe them in each and every activity so as to clearly gauge their actual participation. At any rate, inspite of the often confusing medal updates and awarding of points, the real troupers floated on the surface and showed to the organizers who among the many wannabes come close to embodying the complete package required of Miss Earth 2012 – a young woman who possesses the charm of a Beauty Queen, the hands-on commitment of an Earth Warrior and the discipline to maintain a positive image as Spokesperson of Mother Earth during her reign.

On a sidenote, a little birdie told me that the challenges make up for a certain percentage of a delegate’s preliminary scores. This will then be added up to the Pre-Judging. It makes sense that a strong cumulative total in the former plus a good set of numbers from the judges will insure a semifinal slot.

So without further ado, here is my forecast for the finals of Miss Earth 2012 tomorrow night at the Versailles Alabang…

Now this is how I actually ranked my Top 20 preferred ladies which yielded a (highlighted) Top 16: 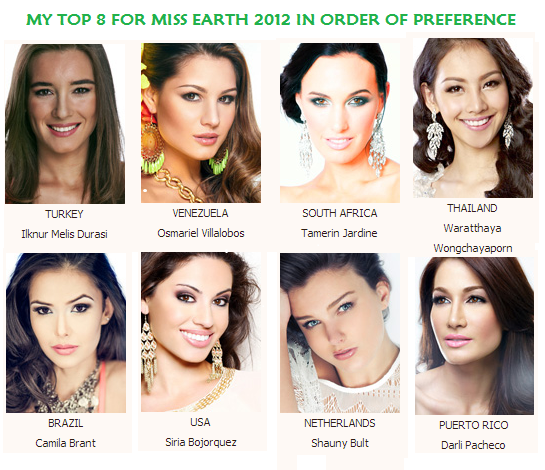 At this point, any of the eight (8) ladies above can still take the top spot. But since a very crucial interview portion happens in this segment, one (or two) in the lower four is still capable of stealing the limelight and take an element from one of the leaders. At any rate, I’d like to stay firm with the Final Four, and here they are… 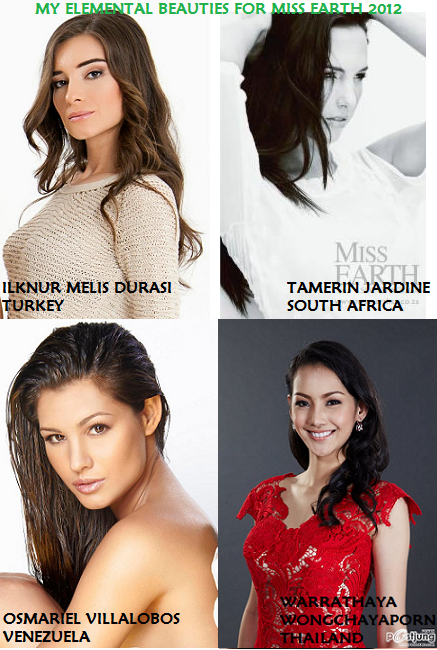 And so, I have finally arrived at my Top 4, Elemental Beauties if you will. Truth be told, I consider three of the four in dead heat as far as who should win tomorrow night. I have already pegged Warrathaya Wongchayaporn to be named Miss Fire. However, Ilknur Melis Durasi of Turkey, Tamerin Jardine of South Africa and Osmariel Villalobos of Venezuela – each representing three different continents – can still take it all the way. It boils down to who can give the best answer in the final Q&A (which we shall find out 3/4 into the pageant proceedings) and be hailed Miss Earth 2012.

Will it be the rugged & no-nonsense Turkish, the warm & sunny South African or the divinely beautiful Venezuelan?

I think my dear readers can take a hint. I would be thrilled seeing either Turkey or South Africa winning for the first time. But I will also be ecstatic if Venezuela captures the first-ever victory for an Osmel Sousa protege. Miss Earth 2011 Olga Alava is almost certain to crown any one among the three.

All the medals and green ribbon points have been already handed out. The Golds, Silvers and Bronzes are already around the necks of their respective winners. And the corresponding points have been tallied.

What does this mean?

The Official Preliminary Judging is happening as I blog. Whatever scores the Miss Earth 2012 candidates earn here will comprise a good chunk of weight in determining the Top 16 to be announced on Finals Night. The remaining percentage will be taken from their individual cumulative performance in the challenges. I cannot specify as of yet what the distribution is, but I could hazard a logical guess of 70/30 (70% from the Pre-Judging and 30% from the Challenges). I don’t see it as 50/50 because that would be too strong an allocation for all the medal-earning activities.

So for now, congratulations are in order for the Top 4 in all the challenges – Ilknur Melis Durasi of Turkey for topping the whole thing, with Tamerin Jardine of South Africa not too far behind in second place. Darli Pacheco of Puerto Rico and Warrathaya Wongchayaporn of Thailand are tied for third place overall. Knowing that these four ladies won’t lag behind in the preliminary judging, I am pretty sure they are already shoo-ins for the Official Top 16. 🙂

Miss Earth 2012: so many medals already handed out

The Miss Earth 2012 Challenges are nearing completion, with almost all medals already awarded to the winners in the three groups. Here are the latest recipients: 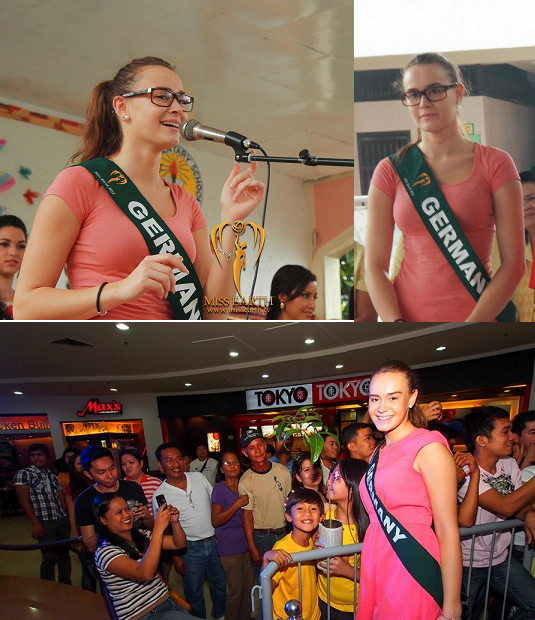 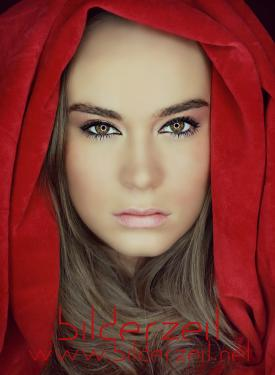 19 year-old Nel-Linda Zublewitz of Germany is probably one of the simplest among this year’s delegates of Miss Earth 2012. Make-up wise, she follows the ‘less-is-more’ mantra. And whenever the activity allows them to dress down, she doesn’t mind wearing her trusty eyeglasses to rest from the frequent use of contact lenses. And believe me, this lady from Bünde glows with or without those bifocals.

On the other hand, people may tend to assume that she is a reluctant beauty queen, however she is not. It’s just that her thrust is on becoming an effective spokesperson of her country for Mother Earth. When asked about her tip on sustainable energy (as quoted from the Miss Earth website), this is what she has to say: “… To humanity it is normal to always search for the cheapest and easiest way out. My tip is to stop searching for the answer if we already know it. It shouldn’t be easy for big companies to find ways to outsmart laws.”

Her entry in the Miss Earth Eco-Beauty Online Video Voting may look amateurish (aside from having been filmed in low resolution), but she makes a lot of sense. Watch below:

I like this girl. And if she is rewarded with a good placement during the Miss Earth 2012 finals next week, I’d be the first one to applaud her efforts. 😉

The Scientist from Turkey keeps the lead. Belgium shines bright.

Ilknur Melis Durasi of Turkey is pulling away with the lead at 82 points – a good distance away from surprise performer Madima Hamidi of Belgium and the consistent Tamerin Jardine of South Africa who are tied for 2nd place with 68 points apiece. Sharing 4th place are Jenna Seymour of Australia and Darli Pacheco of Puerto Rico, both earning 66 points so far. And very close behind is a trio of beauties with identical 64 points – Nel-Linda Zublewitz of Germany, Osmariel Villalobos of Venezuela and Zoe Kinsella of Wales – all good enough for a 6th place tie.

Anything can still happen between now and the weekend. Rankings can still change, but it would be safe to say that Turkey is lording it over, unless another challenger churns out a succession of Gold Medal winning participations in the next couple of days.

In summary, the current leaders are:

Here now are the updated medal tallies of all three groups from the various completed Miss Earth 2012 Challenges as of November 14, 2012:

Are your favorites up there? 😉