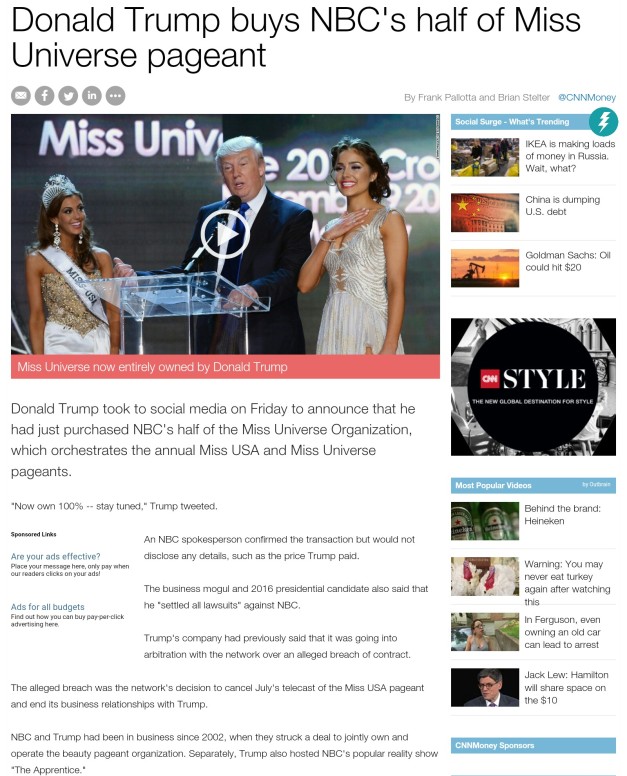 Donald Trump now owns the (Miss) Universe. All 100% of it. Done deal. And the price tag offered to NBC? Secret.

In this article by CNN Money, Mr. Trump has bought the 50% share of NBC and can proudly say that he is fully in-charge as owner of our favorite beauty pageant. What does this mean? Simple. He can willfully sell Miss Universe to the highest bidder if he so wants. And I think he does.

It’s hard to tell how the next edition will look like. Heck, I don’t even want to know the full details yet.

But one thing is for sure.

Miss Universe will never be the same again.

I just hope that the next owner will love it more than we all do. That’s the only way everyone can be happy. Hopefully. 😉

Come August 22, Miss Universe 2010 will be crowned in Las Vegas, Nevada. The bright lights city has taken the chores of hosting the biggest global beauty pageant. It will be held at the Mandalay Bay Events Center at the Mandalay Bay Resort and Casino. The different country representatives can now heave a sigh of relief that a venue has already been chosen.

Las Vegas has already hosted the Miss Universe Pageant in 1986 (when Venezuela’s Alicia Machado won) and 1991 (when Lupita Jones of Mexico was crowned.) Third time could be a charm for this “sin city” when gorgeous ladies from around the world start pouring in by the first week of August to vie for the most prestigious crown in beauty contests. Miss Universe 2009, Stefanía Fernández from Venezuela, will crown her successor at the end of this event. More than 80 countries and territories will compete for the title and the pageant will broadcast live on NBC and Telemundo.

Here are some early tidbits: For the first time, Azerbaijan will be represented. Haiti will also be returning. Bulgaria, on the other hand, won’t be fielding a candidate this year, just as Cayman Islands will be missed. Great Britain’s sash will be worn for the first time by a Latina – Tara Hoyos-Martinez – who is of Colombian descent. Nicaragua will have a black woman as its bet – another first for this Central American nation. We all know by now that the USA will have Rima Fakih – the first Arab-American to win the title, while the Philippines – barring any further complications – will be bannered by half-Indian Maria Venus Raj.

Miss Universe 2009 Stefania Fernandez of Venezuela will be crowning her successor in Las Vegas come August 22.

I’m sure the Filipino community in Las Vegas will be in full support for our own delegate, just as their counterparts in California and other US states will be in attendance.