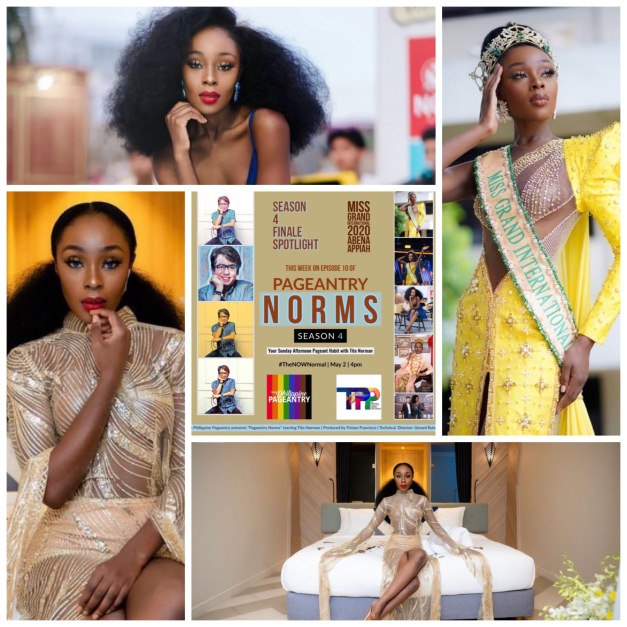 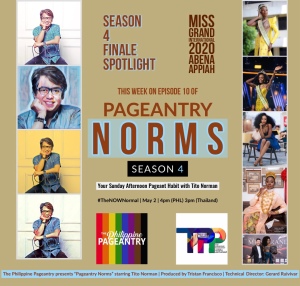 #NextAttraction on the Season 4 Finale of Pageantry Norms this coming Sunday, May 2 at 4pm (PHL)/ 3pm (THA):

We saved the one and only solo guesting of the season for this winning beauty who went to Thailand to represent the United States of America and ended up with a #grand title of her own.

Throw in your questions and join the discussion on The Philippine Pageantry and its YouTube channel. 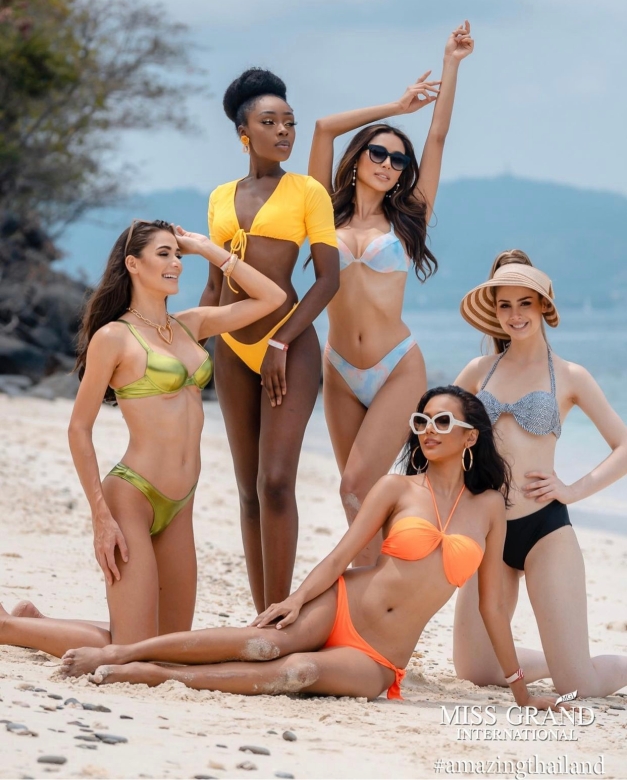 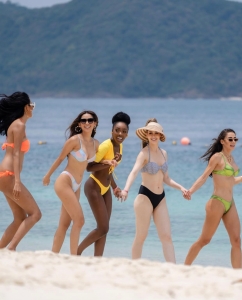 The winners of Miss Grand International 2020 led by Abena Appiah have been thoroughly enjoying #AmazingThailand at a most leisurely pace. But soon, they will each move on with their lives and look back at the wonderful memories of the time spent together. 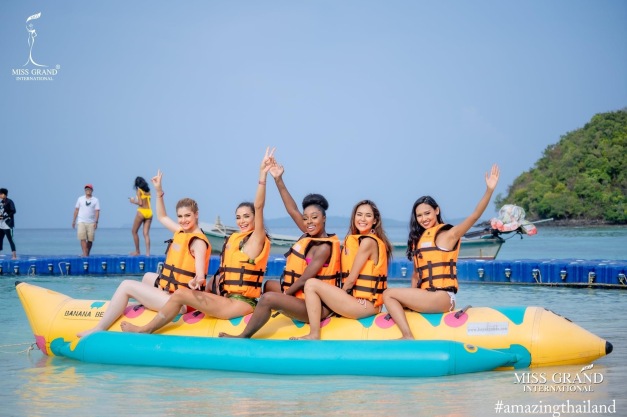 I never imagined I would be blogging this, but Nawatt Itsaragrisil and his pageant has now set a benchmark on how to properly host an international competition amidst the global pandemic. And to actually have all five winners touring Thailand for almost two weeks after the finals is just icing on the cake.

The 14-day quarantine upon arrival should be mandatory. But the most important detail is that the host country and its government is also effective in keeping the COVID virus from spreading.

MUO should be observing their movements more closely before the 69th Miss Universe delegates start arriving in Hollywood, Florida next month. 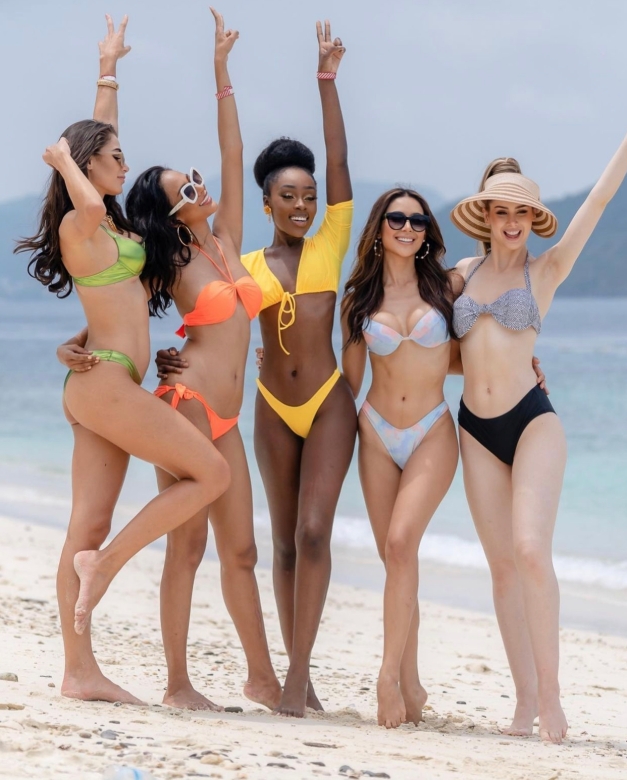 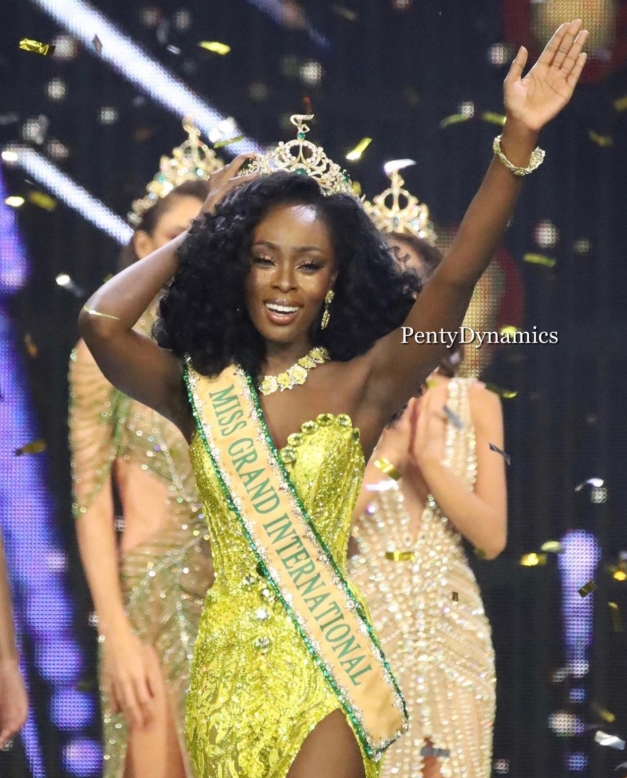 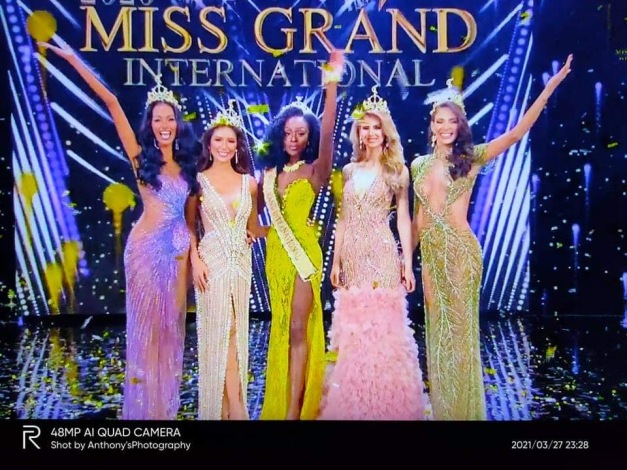 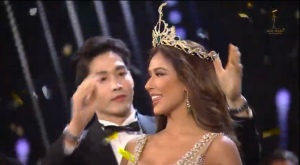 It was such a close fight for the crown that a sudden death was declared when only three remaining ladies in the Top 5 were left unannounced in terms of placement. An extra round of Q&A took place and this yielded the following results:

1st Runner Up:
Samantha Bernardo of the Philippines

Nawatt really knows how to make newsworthy moves in his pageant. Add to that the spotlight moments of Misses Kenya and Nigeria who tested positive for COVID upon arrival in Thailand and Miss Myanmar Hann Lay who did a long speech about the coup troubles and fighting in her country. 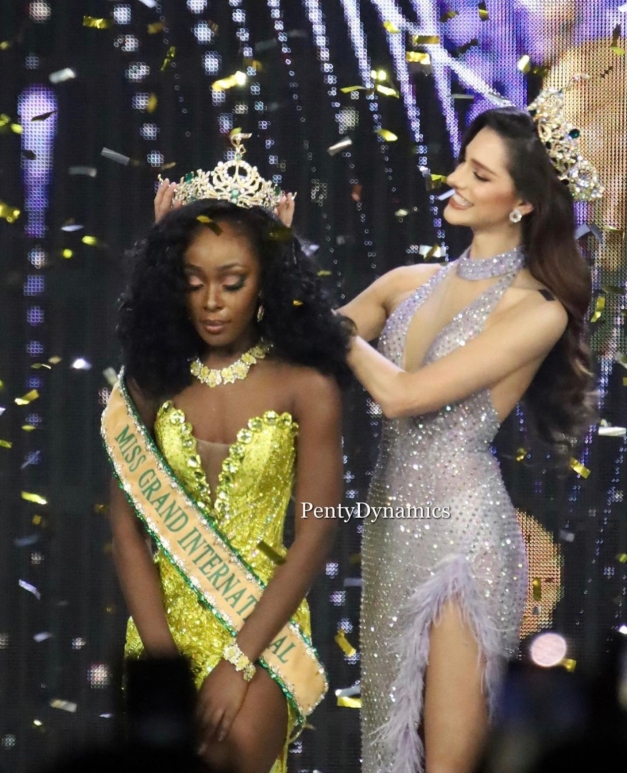 I was really rooting for Samantha to take the crown after the second round of final questioning but the judges might not have been convinced when she chose to give the last vaccine available to a senior citizen (this is like a deja vu of what happened to Nicole Cordoves last 2016 when she chose to give the less popular answer and ended up getting 1st Runner-Up to Ariska Pertiwi).

Anyways, what are your thoughts, dear readers? 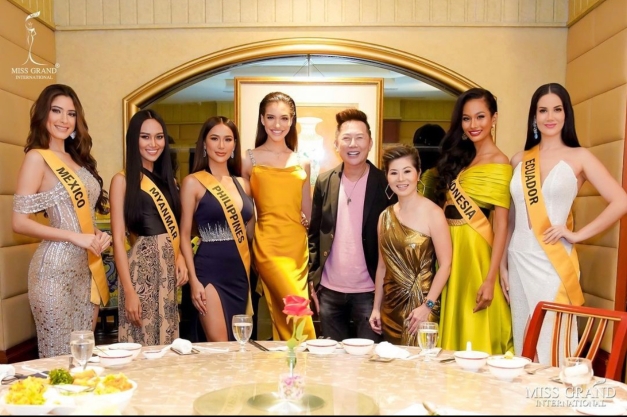 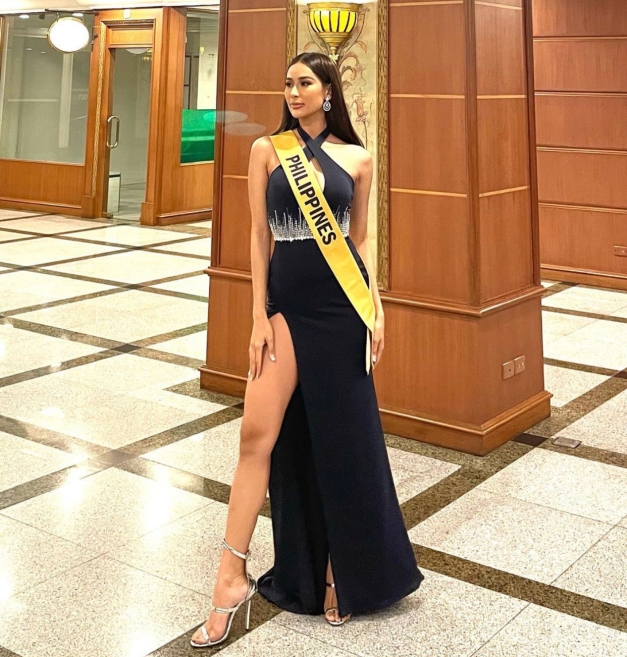 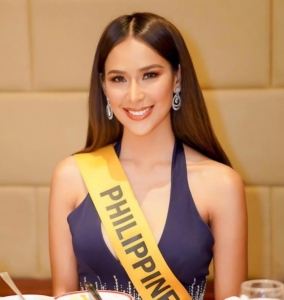 Here are dinner photos of Miss Grand Philippines Samantha Bernardo with ณวัฒน์ อิสรไกรศีล – Mr.Nawat Itsaragrisil, reigning titleholder Valentina Figuera and the four other delegates who made it to the Top 5 Pre-Arrival popularity voting for Miss Grand International.

In the group photo, you might think that Samantha got dwarfed by the ladies in attendance. Well, she wore regular heels (based on the solo photo above) which actually gave her a sexier stance.

Watch the video of the special dinner below. 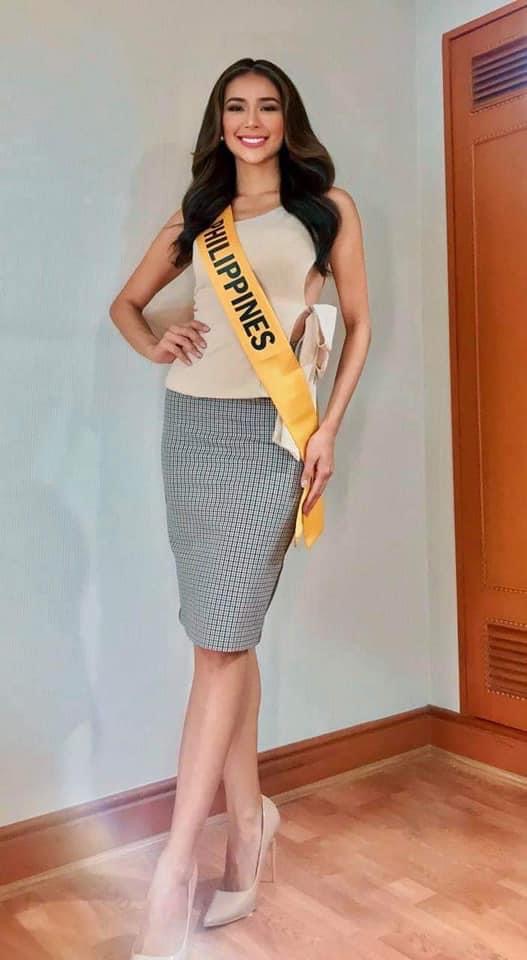 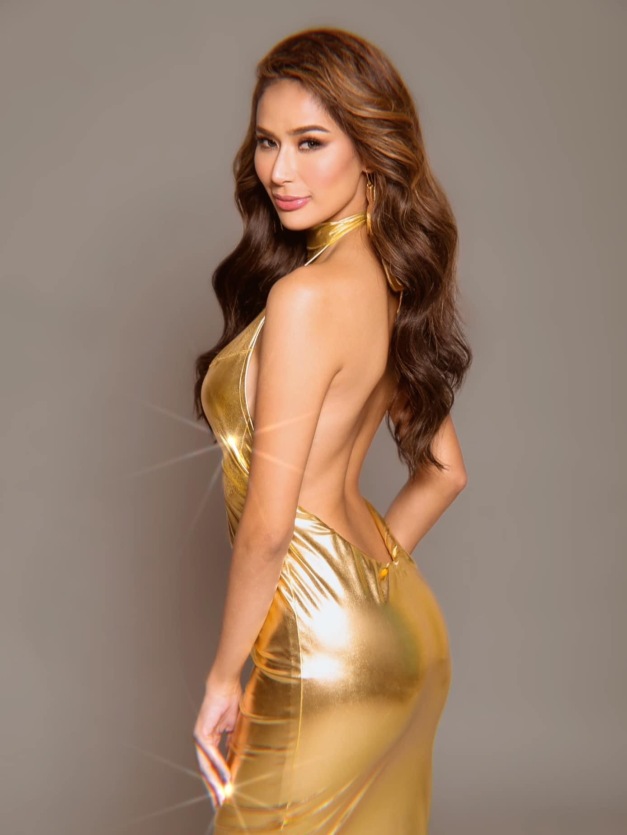 Miss Grand Philippines Samantha Bernardo has successfully cleared the state quarantine (SQ) requirements of Thailand for her participation in Miss Grand International. Not that she is now allowed to freely roam around or outside Golden Tulip Sovereign Hotel. But she can easily be one of the chosen delegates to join in sponsor visits within the next day or two.

For now, Sam is readying herself for the day when all her fellow delegates are free from SQ, and they can all meet each other/bond inspite of the mandatory health and safety protocols in place. 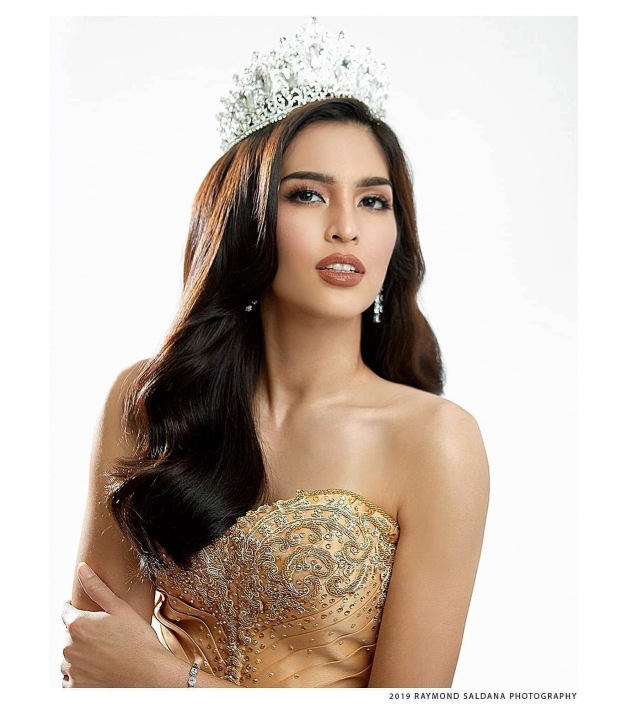 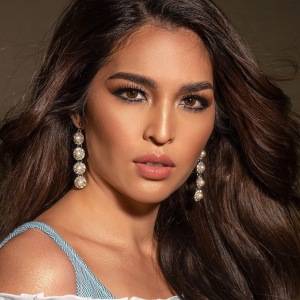 You will soon leave for your pageant mission in Venezuela for Miss Grand International 2019. The path – and the long-haul flights – are not the smoothest to tread. But I trust that you will emerge as the Queen who will prove to all Filipinos that you have what it takes to win the bigger crown that your predecessors have not yet bagged. Your game plan will see you shining through. And you should know how by now that part of the challenge is to get on the good side of Mr. Itsaragrisil in the smartest way that I know you’re capable of pulling off. 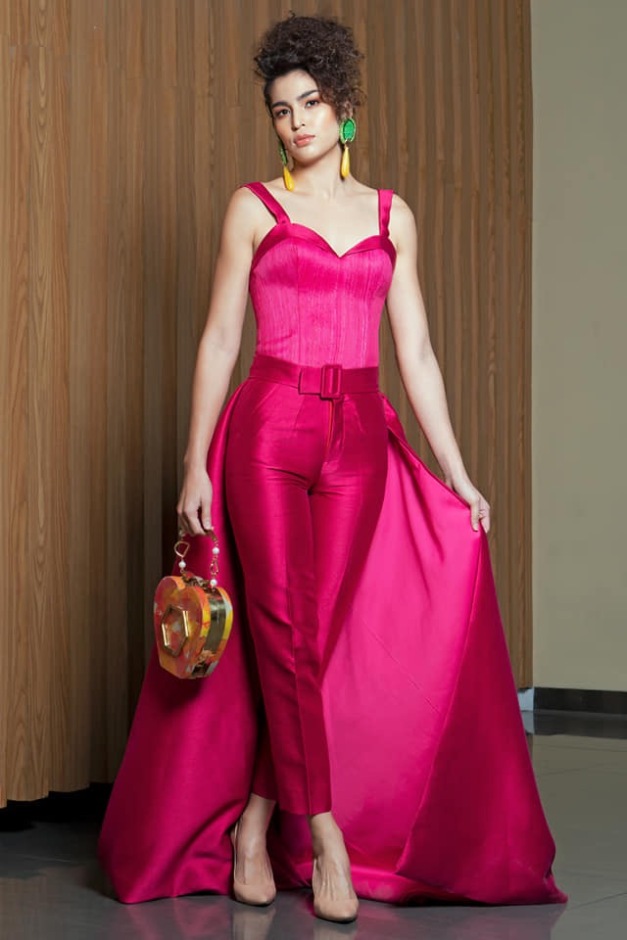 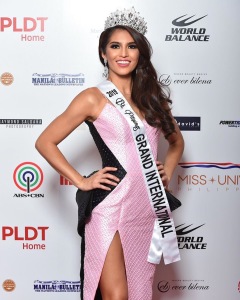 There are two Cebuanas who grabbed crowns in Miss Universe Philippines | Bb. Pilipinas 2019. Aside from Gazini Ganados, the representative of Cebu – Samantha Ashley Lo – is the second biggest pride of the Queen City of the South in the competition. And she is one of those tagged as big spoilers just days before the Grand Coronation last Sunday night.

We already know how good a communicator Samantha is, and she was able to put it into good use not only in her public interviews but also during the Top 15 Q&A when PBA Basketball Player Christian Standhardinger asked about her best non-physical asset. Re-watch her 30-second freetalk during the prelims below when pageant followers started to include her in the list of strong contenders. 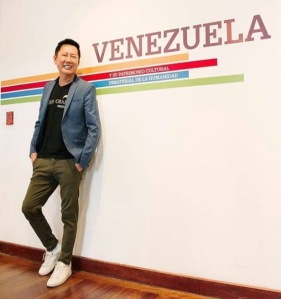 A Binibining Cebu Tourism titleholder back in 2017, Samantha has already had the chance to represent us internationally when she took part in Best Model of the World 2018 held in Ankara, Turkey last December. But that was a stint that focused more on her catwalk/modeling skills instead of the ability to spontaneously express herself. I trust that she will be able to maximize her full potentials once she sets foot in presently crisis-laden Venezuela for Miss Grand International 2019. On top of her spirit for travel and adventure, she should be able to blend well with the locals in the city of Caracas (which is a relatively unusual choice to be at the helm of international pageant hosting). And get on the good side of the eccentric Nawatt Itsaragrisil (right photo) in the process of doing so. 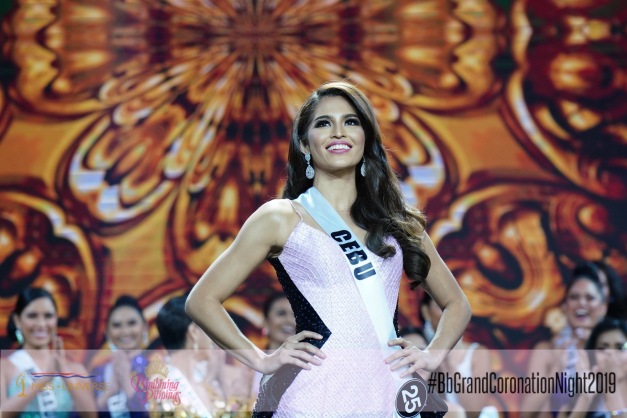 Who could be the next Bb. Pilipinas Grand International?

It’s already June 1, just a little over a week away from the Grand Coronation Night. Here’s the first of several blog entries for my final Bb. Pilipinas 2019 Predictions. 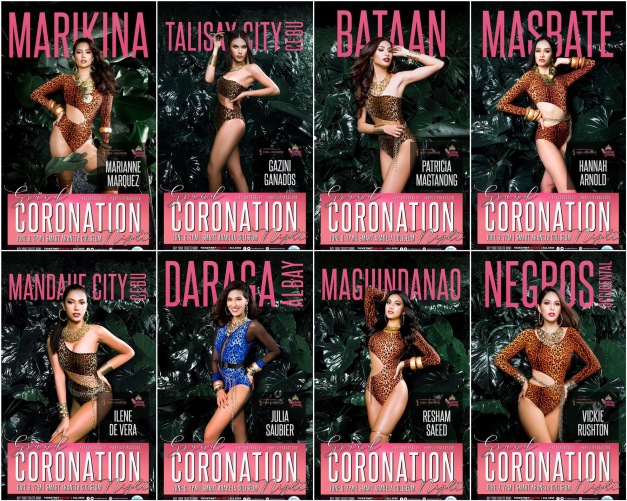 It’s no secret to any pageant fan how Eva Patalinjug was stiff-armed during last year’s edition of Miss Grand International. She missed making any cut in the competition and ended up unplaced. But we all know that our representative deserved to be part of the Top 20 at the very least.

So for the successor of Eva, my guess is that we need either a Goddess who can blow Nawatt Itsaragrisil away from Day 1 of her National Coronation or an excellent communicator who can eclipse his positive impression of Nicole Cordoves and be an all-around spokesperson for the pageant’s cause against war.

In my heart, Resham Ramirez Saeed of Maguindanao should win this title. She is an effective speaker who, sadly, is not getting all the right opportunities to fluidly express herself in public. In addition, her half-Pakistani ethnicity can add to the spunk brought about by her growing up years in Canada. 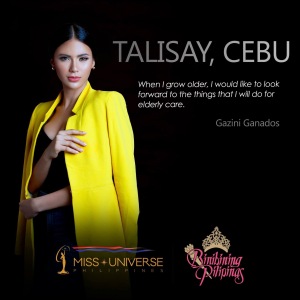 But in my head, Gazini Ganados of Talisay, Cebu is more likely to win Bb. Pilipinas Grand International 2019. Her half-Palestinian lineage is one of the considerations. But more than that, I feel that her beauty and natural sensuality will finally bring the international competition to its knees and deliver to the Philippines a long-overdue #1 finish in Miss Grand International. 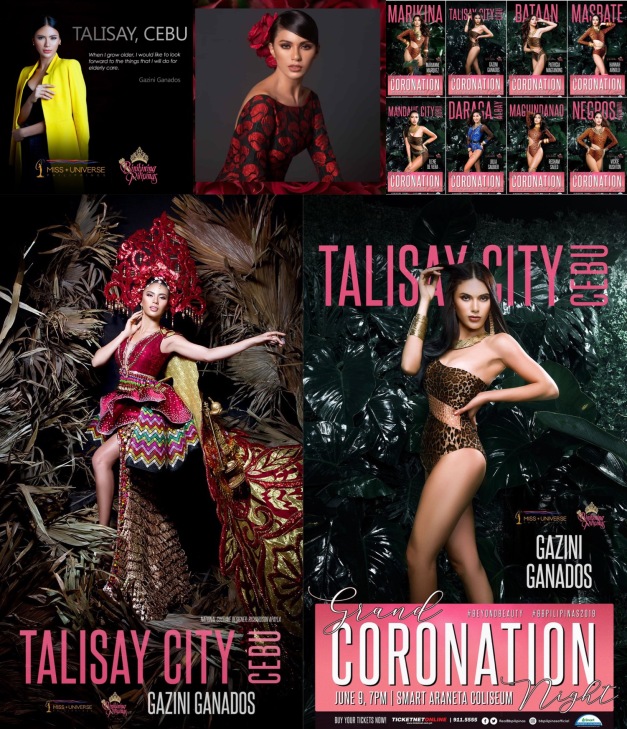 Eva Patalinjug: “I will really do my best…to get our first Golden crown” 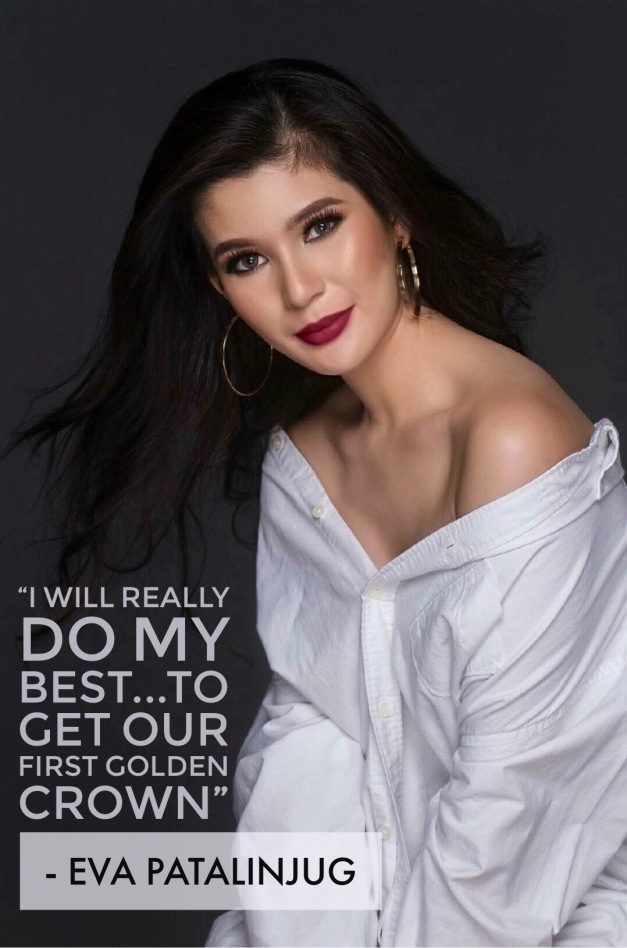 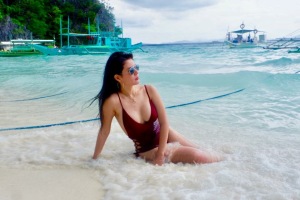 Here is a personal update she gave on her preparations:

“I’m not putting too much pressure on myself right now as I’m just enjoying everything. I’m going with the flow and preparing all that I have to bring for my pageant. I’m practicing my speech, my Q&A, doing my own make up and hair and of course my pasarela. We had a meeting already about our collaborative vision on my gowns and national costume. And I’ve already sent the sketches to Binibini for Madame Stella’s perusal. I’m very overwhelmed and grateful with all the support I am getting not just from the Philippines but around the world.

I’m very thankful as well that a lot of well-known designers will be helping me throughout my journey and I hope I wear their creations with justice. I will really do my best in order for us to get our first Golden crown. I am doing all that I can. The rest I leave it all up to Him.” 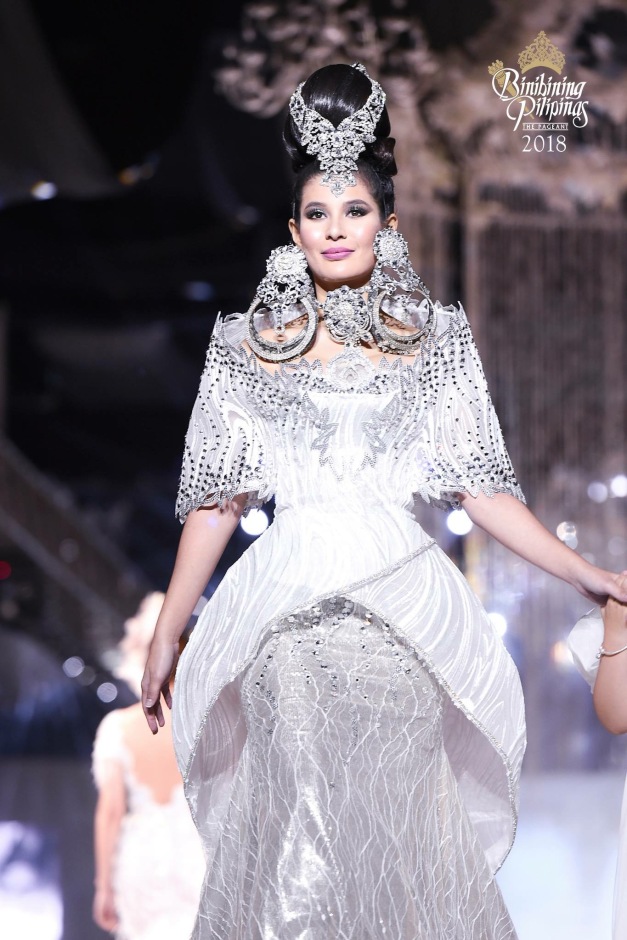 Eva is doing her homework diligently. And I reckon that part of her assignment is to start chatting with her future fellow candidates as well as the pageant owner himself, Nawatt Itsaragrisil. She is fully aware that only her title and that of Karen’s have not yet been matched with a big win internationally. And she wants to be the first Filipina to become Miss Grand International.

PS. I was told that Cebu-based designers Cary Santiago and Phillip Tampus will do Eva’s Competition gown and National Costume, respectively. 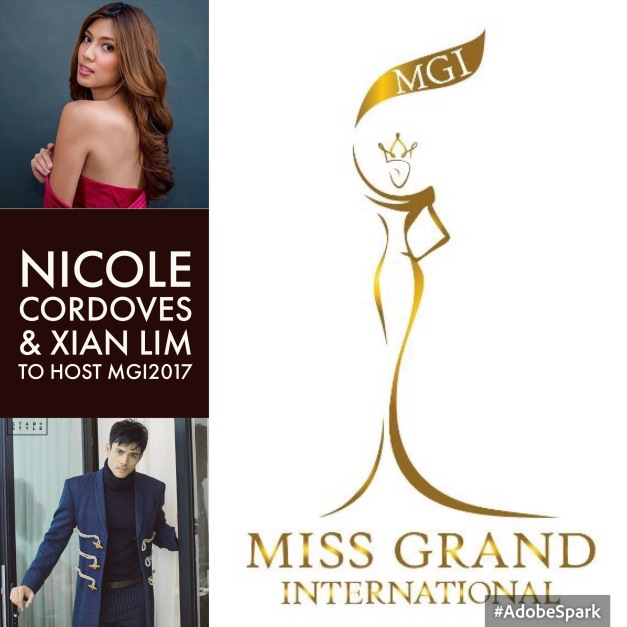 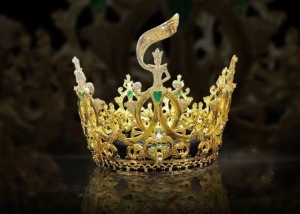 We already know about Miss Grand International 2016 1st Runner-Up Nicole Cordoves as the female host. But now, she will be joined by Filipino actor and singer Xian Lim to form a new tandem that will hopefully bring the big event to greater heights. The latter has been co-hosting Bb. Pilipinas so pageant owner Nawatt Itsaragrisil must have been convinced of his skills during the last edition which he personally attended at the Big Dome.

This will be Xian’s first big break in international pageant hosting so who knows what new doors of opportunites will open up for hin right after.

Below is the new teaser of Miss Grand International 2017.