Throwback Thursday: Andrew Wolff not so long ago

Andrew (leftmost) getting literally down and dirty for the team challenges

Since the first of June, I have been actively featuring John Spainhour and his ongoing quest to win Mr. World 2014 in Torquay, England. And so as a fitting Throwback Thursday feature, I decided to go with the suggestion of one of our regular readers (AG) to have Andrew Wolff even if his achievement in the same competition wasn’t really too long ago a time to begin with.

Just like his successor, Andrew was also presented to the media a very short time before departing for the host city – Kent, England. The appointment was kept hush-hush. But when his name was revealed, everyone gave out shouts of joy and optimism that our entry had all the right ingredients to win and be called the World’s Most Desirable Man back in 2012.

Andrew was so close to getting Mr. World Sports Challenge then after topping the Sprints with Colombia (left) and Martinique giving him some stiff competition.

And so, Mr. World Philippines 2012 arrived in UK with enough funfare. He discovered that Michael McCann of Northern Ireland was to be his roommate and as expected, the bonding went by quite fast even if they got assigned to different teams during the physical challenges.

Out of all the key segments in the competition, Andrew felt that he had the least contribution in the Talent auditions. Neither can he sing nor dance to even make it past the first round. And so, he vowed to go all-out in the succeeding events where his strength and agility as a rugby player will be utilized to the max. 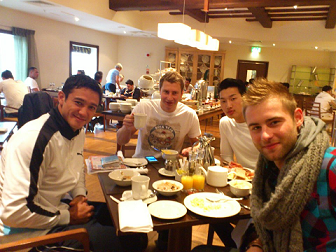 Andrew (leftmost) got his share of best buddies in the batch as well.

And our guy did not disappoint. Challenge after energy-draining challenge, he gave it his all and never fell off the top tier of performers in almost every team and individual events. Up to the very end, he made sure his level of sportsmanship never waned. And once the dust settled, he was so close to winning Mr. World Sports Challenge by placing 1st in both Soccer and Sprint.

Outside the battlefield, he also became quite a good buddy to many fellow candidates. In all photoshoots, TV guestings, day trips and return excursions, he always had the friendly smile and brotherly aura the other guys appreciated. So it no longer came as a surprise that he became one of the top picks to shine on finals night.

Andrew (rightmost) with the nine other candidates who made Top 10 during the finals of Mr. World 2012. 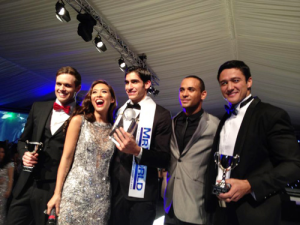 Inside the Kent County Showground, the competition went on without a hitch. Andrew was pleased that he was named winner of Mr. World Multimedia Challenge – his automatic ticket to the Top 10. And while he knew that he had a clear shot at winning the title, he enjoyed the whole show and was never outlasted by stress up until the Top 3 when it was crystal-clear that he had 1-out-of-3 chance to become the Philippines’ first Mr. World victor. But it wasn’t meant to be yet as he had to be content with 1st Runner-Up honors to eventual winner Francisco Escobar Parra of Colombia.

Best of the best back in 2012 (Left to right): Leo Delaney of Ireland, 2nd Runner-Up; Francisco Escobar Parra of Colombia, Mr. World 2012 and Andrew Wolff of the Philippines, 1st Runner-Up.

Andrew Wolff’s performance during Mr. World 2012 is something that should not be forgotten easily. Our current rep, John Spainhour, may be constantly compared to him, and that can’t be helped because of plain recency. Let’s hope that the memories made two years back will serve as strong inspirations to do better than good in Torquay. 🙂