Mutya Datul and her plans for a post-Miss Supranational life 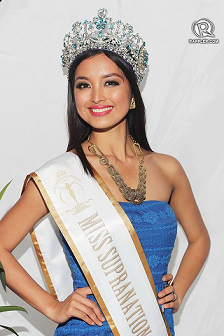 Inspite of some heated online discussions about who really deserves to take credit for the training and transformation of Miss Supranational 2013 Mutya Johanna Datul from a simple provincial lass to a Bb. Pilipinas titleholder to an international winner who has brought pride and honor to the country, the simple and unassuming Isabelan remains unaffected and takes each blessing that comes her way with joy and gratitude.

Just to keep it plain and simple, I would simply give due credit to Fashion and Wedding Designer Mitch Membrere for discovering our beautiful Queen. Anything that happened afterwards is open to a lot of potshots so it’s best to refrain from any arguments and the like.

Let’s just be happy for Mutya and wish her continuous luck long after crowning the next winner in Poland. 😉 Will Macoy Manlapaz make a Mutya Datul out of either Joy Marie and Hannah Sheena? (Photo credit: OPMB Worldwide)

The two R-L Angels aren’t the only strong duo among the remaining aspirants of Bb. Pilipinas 2014. There is another we fondly call ‘The Isabelanons’ but from now on (thanks to Beauty Spy), we can also tag them as the entries of discoverer Mitch Membrere (a fashion designer from Isabela) and beauty trainer Macoy Manlapaz.

Mitch Membrere who? Well, the name doesn’t ring a bell outright, but he is the one responsible for the girl who captured the country’s first Miss Supranational crown last year. Yes, he is the mentor of Mutya Datul during Bb. Pilipinas Gold.

And by the looks of it, he might have another winner in one or both of his wards this year. 5’10” Joy Marie Gangan and 5’9″ Hannah Sheena Manuel are definite contenders at this point. And I bet both will become Official Candidates during tomorrow’s announcement.

If Lady Luck stays on their side all the way, what are their chances of capturing the Supranational pennant once more? What say you, dear readers? 🙂