As all of you know by now, Miss Universe 2019 Zozibini Tunzi has been making good use of her quarantine time by chatting with either previous recent winners or fellow candidates during last year’s competition.

Below is her online one-on-one with Lara Dutta of India who was Miss Universe 2000 and who is celebrating her 20th Anniversary as the titleholder. Watch now.

Angeline (extreme left) with Vartika of India, Hoang Thuy of Vietnam and Frederika of Indonesia (Photo by Fadil Berisha)

You will all remember Angeline Flor Pua, the full-blooded Filipina who won the national crown of Miss Belgium 2019 and represented the Western European country in in both Miss World 2018 in Sanya, China where she competed with our Katarina Rodriguez and Miss Universe 2019 in Atlanta, Georgia against Gazini Ganados.

Angeline has recently started her own channel on YouTube. Check out this lady and see how she communicates to her subscribers. It is one aspect that we have not really seen and appreciate about her. 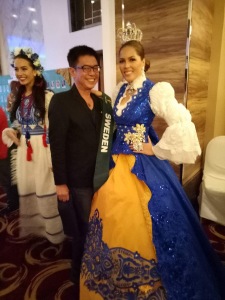 It’s already a given that Filipinos are the best exports the country has. Be it in contracted work or immigration, our kababayans almost always excel in anything that they set their hearts into, pageantry included.

In the Scandinavian region and Western Europe, four (4) Filipinas have scored wins in the national pageants of their respective home countries. These ladies went on to compete for three of the biggest crowns in international beauty contests – Miss Universe, Miss World and Miss Earth. And the Pinoy connection cannot be denied. Apart from looks and names, they themselves have proudly stated their roots.

Filipino-Americans have done decently well in US pageants. Back in 1998, an 18 year-old from Charleston, South Carolina bested all the youthful state candidates to win Miss Teen USA 1998. Her name is Vanessa Joy Minnillo.

Vanessa was born at USAF Clark Regional Medical Center in Angeles City, Pampanga, Philippines. Her father, Vincent Charles Minnillo, is an American citizen from Cleveland, Ohio of Italian and Irish descent, while her mother, Helen Ramos Bercero, is from Manila, Philippines. Minnillo has an adopted brother who is two years older. Her father moved the family frequently because of his service in the Air Force. She lived in Washington, California, Nevada, Florida, Germany and Japan and attended eight different schools in nine years. Minnillo’s parents separated in 1983 and were divorced in 1986.

Vanessa was able to make good use of her platform as Miss Teen USA. She knew what she wanted as a career. Eventually, she became the New York-based correspondent for Entertainment Tonight and hosted Total Request Live on MTV. She has also starred in two network sitcoms, while hosting various competition and reality shows through the 2010s and up to this year actually. She is also a seasoned pageant host for both Miss USA and Miss Teen USA. Last December, she was co-host of Steve Harvey for the Miss Universe 2019 in Atlanta, Georgia. 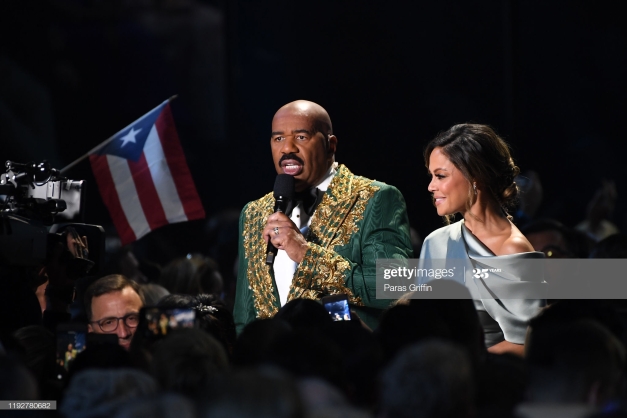 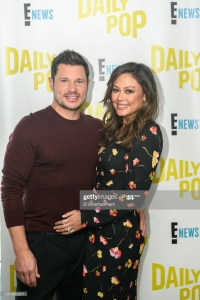 Here’s a movie trivia for you: Have you watched the movie “Fantastic Four: Rise of the Silver Surfer”? Betcha didn’t notice her quick appearance as the wedding date of Johnny (Chris Evans).

Anyways, Vanessa married singer Nick Lachey last 2011 after years of a more-on-less-off relationship. They have been blessed with three children ever since.

The Zozibini and Catriona Chat

I am sharing with you the chat between two Miss Universe winners – the reigning Zozibini Tunzi from South Africa and our very own Miss Universe 2018 Catriona Gray. 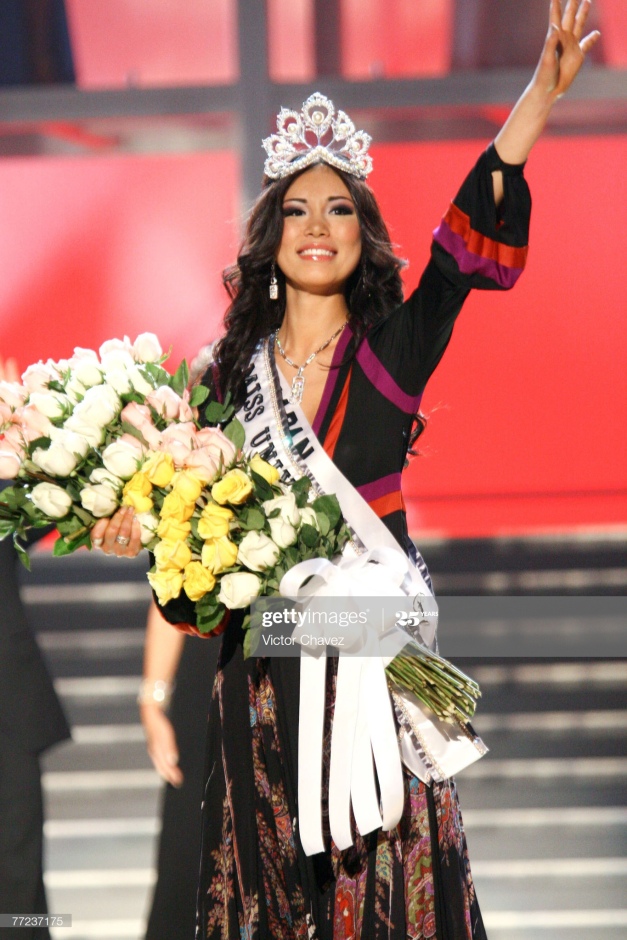 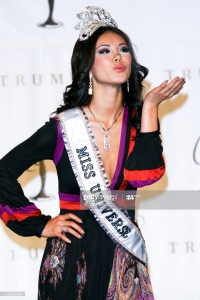 The victory of Riyo Mori during Miss Universe 2007 easily sticks out in the mind of followers of modern pageant history because: 1) an Asian delegate prevailed over the Latinas in their own turf which presumably led to 2) Zuleyka Rivera looking disenchanted when she crowned her successor especially that 3) Riyo wore the most non-pageant competition evening gown on the road to the crown, and 4) another Asian – Honey Lee of Korea – making it all the way to Top 5 (which happened again in 2011 when the Philippines and China emerged as runners-up).

Donald Trump gave his two thumbs up to the win of Riyo Mori regardless of his personal preferences. After all, pageantry is and will always be a business. And the Japanese beauty really delivered when it mattered. Never mind the pressure from the Latin American audience and watchers. Truth be told, I was secretly hoping then that Natalia Guimaraes of Brazil would be named winner. But 1st Runner-Up ain’t bad. 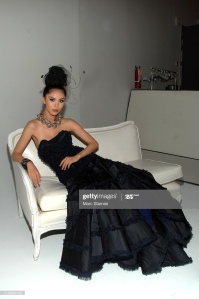 The life of Riyo took a 180-degree turn from the time she was named Miss Universe 2007. From being a ballet dancer and model/actress in Japan, she embraced the bigger limelight and made herself available for all the commitments and public demands of the title. As a result, she was one of the most well-traveled titleholders after visiting Indonesia, Spain, the Bahamas, St. Kitts and Nevis, China, Mexico, Canada, Germany, Vietnam, France, Monaco, San Marino, Russia and Italy throughout her reign.

Below is a video of Riyo being interviewed by Miss Universe 2018 Catriona Gray during Miss USA 2019.

Riyo eventually starred in the MTV reality TV show “Pageant Place” that ran for one season, as well as the VH1 program “The Price of Beauty”. She was last seen in the Philippines as judge during the 65th Miss Universe. Below is one of her photos in Atlanta, Georgia where she also served as judge during Miss Universe 2019. 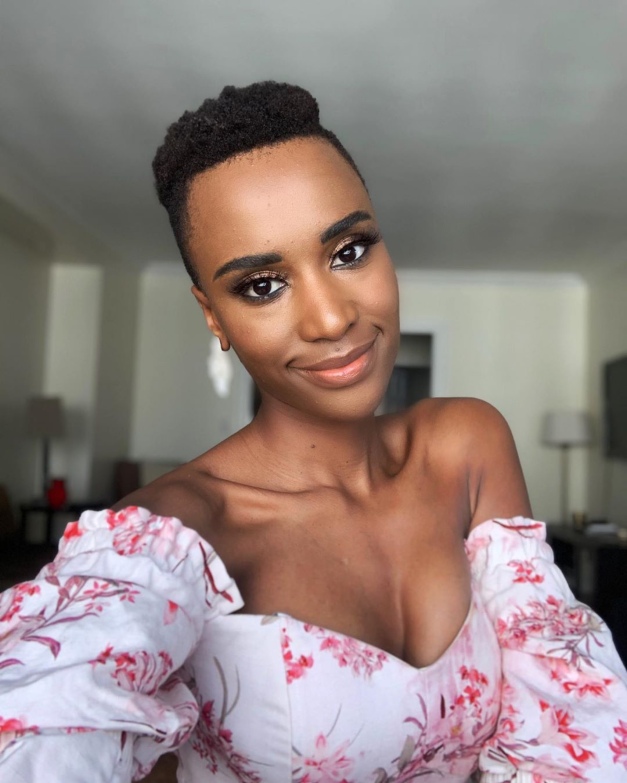 As if it’s not enough that she was getting lukewarm media mileage from the time she was crowned, it’s sad that Miss Universe 2019 Zozibini Tunzi continues to experience hurdles in her reign, what with the #COVID19 pandemic spoiling whatever foreign travels she may have been invited to during this period. It’s good that she was able to make the trip to Indonesia, appeared during Puteri Indonesia 2020 and filmed her TVC for You.C1000. Below is a message she recorded for everyone amidst all that is happening right now.

In this entry are photos and two videos taken when Miss Universe Zozibini Tunzi has her homecoming tour to Johannesburg in South Africa
(Photos by Oupa Bopape/Gallo Images via Getty Images).

It was only a matter of time before I give her another featured spotlight. With ABS-CBN News and PEP.ph already uploading teasers for next year’s possible aspirants, then allow me to throw in mine.

I almost always get panned for blogging about former Binibini Julia Saubier. There are those who say that I am like a dedicated spokesperson when – just like the other pageant followers and enthusiasts – I am just here to write about her then.

Now with the election of Zozibini Tunzi as Miss Universe 2019, will the likes of Julia – strong-willed and outspoken – have the right ingredients to reconsider a second national pageant outing via Miss Universe Philippines 2020? She has the smarts and the confidence of steel to bravely dare. I have no issue about her looks because she remains beautiful to me – especially in person.

As far as her loss (and non-placement) during Bb. Pilipinas 2019 is concerned, we were still gazing at the direction of a beautiful face first and an articulate self after. Someone like Atty. Bea Patricia “Patch” Magtanong can definitely fit the mold if only she is not under contract with BPCI for 18 months. And that could stop this lawyer from giving up the Bb. Pilipinas International 2019 title in favor of MUP2020. She could gun for another glory in 2021 instead.

For now, let us look at possibilities using a slightly different formula by reversing the focus – articulate and commanding self first and gorgeous face after. After all, a national beauty pageant has the mandated physical requirements already in place.

Miss Universe 2019 Zozibini Tunzi: The start of the media interviews 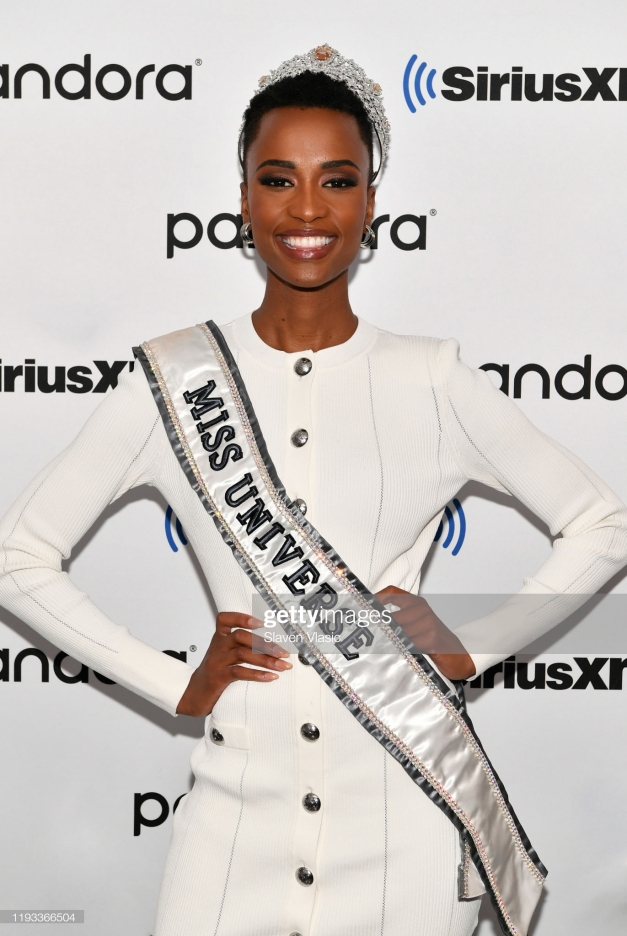 Below is the video of her guesting on Good Morning America:

Below is the video of her guesting on Live Kelly and Ryan:

Here is the video of her interview atop Empire State Building in SABC Digital News: