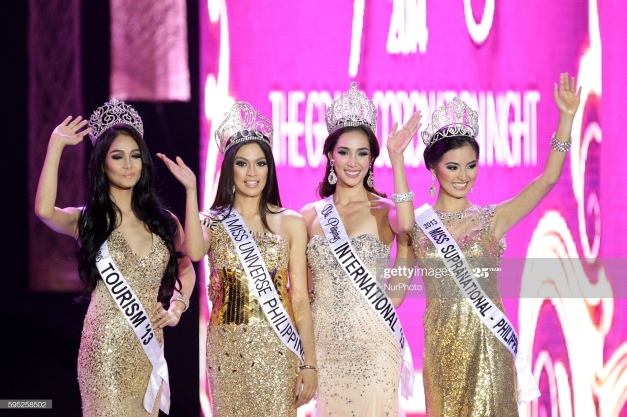 Newly crowned Miss International 2013 Bea Rose Santiago waves to the crowd during her victory parade in the financial district of Makati, east of Manila, Philippines, December 27, 2013. The Filipina won the title of the 2013 Miss International beauty pageant in Tokyo, Japan on December 17, 2013. Photo: Ezra Acayan/NurPhoto (Photo by NurPhoto/Corbis via Getty Images) 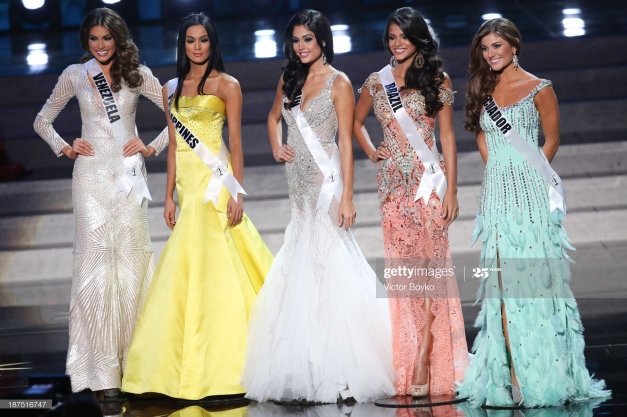 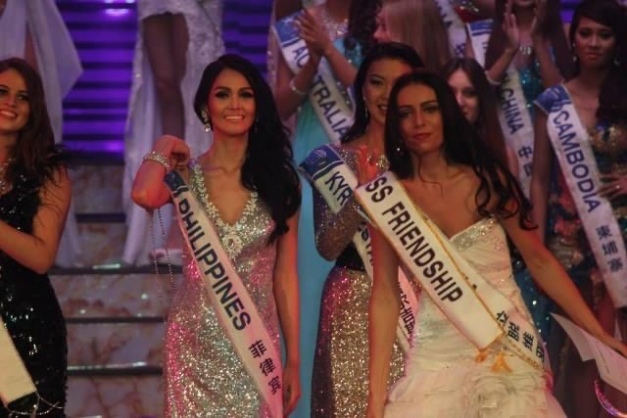 Bb. Pilipinas Tourism 2013 Cindy Miranda made it to the Top 10 of Miss Tourism Queen International in China 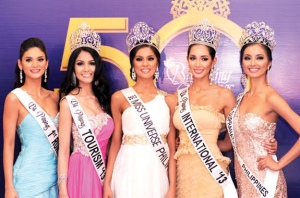 There is a good reason why Gold is always attached to significant milestones. It equates to fifty (50) solid years of achievement – be it marriage or a corporation or personal age. In this case, the high standard is set for national pageantry. Binibining Pilipinas, that is.

Bb. Pilipinas 2013, or Bb. Pilipinas Gold if you will, earned its place in pageant history as one of the grandest and most exciting editions ever. Just imagine assembling fifty (50) official candidates instead of the usual forty (40) or less in the past. The gathering onstage of many previous titleholders made it extra special as well. And among the four titleholders, BPCI produced the country’s fifth Miss International crown, first Miss Supranational win, a fourth consecutive Top 5 finish in Miss Universe and a Top 10 placement in Miss Tourism Queen International. What’s more, this is the only year when only a sole runner-up was named – Pia Alonzo Wurtzbach – the woman destined to claim our third Miss Universe victory two years later. 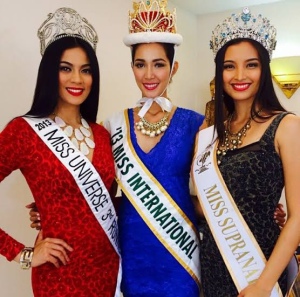 Pageant fans and followers have always graded the success rate of each Bb. Pilipinas edition based not only on the performances of the actual titleholders, but also the future successes of a runner-up or semifinalist. But if we exclusively take the set of winners, the four queens of 2013 can still hold a candle if compared to the 2015 (a Miss Universe, a Miss Globe, a Miss Intercontinental 1st Runner-Up and a Miss International Top 10 Finisher) or the 2018 (a Miss Universe, a Miss Intercontinental, a Miss International 1st Runner-Up, a Miss Supranational Top 10 placer and a Miss Globe Top 15) batches. On top of this, being part of Bb. Pilipinas 2013 is already an honor. At the end of the day, there is one and there will only be one Binibining Pilipinas Gold.

Let me end this entry by sharing a video clip of a scene from the ABSCBN Drama Antholoy “Maalaala Mo Kaya” when actress Liza Soberano played the role of Pia Wurtzbach. This was the part where the 2013 winners had a Press Conference in front of members of the media.

A Merry and Beautiful Christmas to One and All!

From your blogger, here’s wishing everyone the happiest Christmas ever! 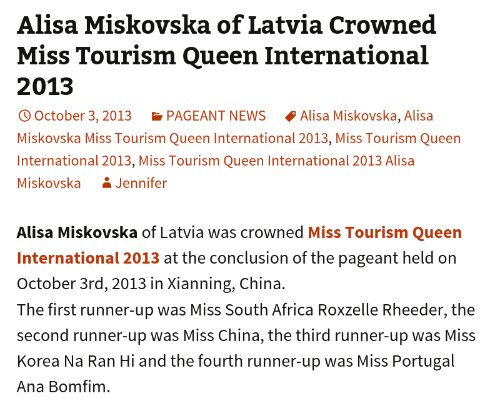 We all would have loved it better had our Cindy Miranda made the Top 5 at least, but her semifinal placement is the best consolation we got in Xianning. Additionally, since MTQI is considered a Grand Slam Pageant by Global Beauties, we can still get precious points towards becoming 2013’s Country of the Year.

Cindy Miranda: Setting her sights on a 3rd Crown

Miss Philippines Cindy Miranda (1st from right, standing) is looking at making it 3-for-3 for the Philippines in MTQI2013

Tonight, Miss Tourism Queen International 2013 will be elected in Xianning, China. From among the more than 40 contenders for the crown, our very own Cindy Miranda is aiming to nail the 3rd international crown to add to the 2013 collection of our Philippines reps. After Miss Supranational 2013 Mutya Datul and Miss World 2013 Megan Young, she is determined to come out of the finals successful with (hopefully) the winner’s crown on her head and sash hanging around her body.

While the once-grand competition has now been downscaled in terms of participation, it does not give our bet an assurance of defeating all comers. There is the likelihood of another candidate or two being preferred over her. At any rate, our Bb. Pilipinas-Tourism 2013 will be giving it her best shot.

Cindy Miranda: Will she dance her way to the top? 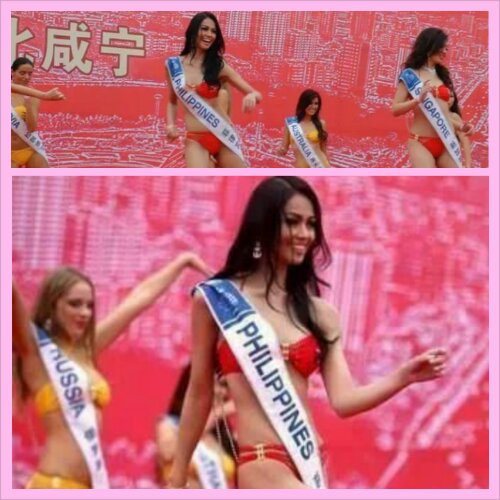 Cindy Miranda dancing onstage during one of the MTQI2013 activities

While I am not in full agreement with the less-than-tasteful instructions of pageant organizers requiring beauty delegates to dance onstage wearing only their two-piece bikinis, what can we do except air our relative displeasure at the mere sight alone? In the ongoing Miss Tourism Queen International 2013 in Xianning, China, the locals (especially the male crowds) must be having a field day ogling at the candidates gyrating in front of them in nothing but their skimpy swimwears.If this thing was even thought of during the Miss World 2013 pre-pageant schedule, the protests would have reached levels of physical unrest.

At any rate, our Cindy Miranda looks like she’s enjoying her stay in Mainland China, even if homesickness has set in. (See image below) After learning of the recent crowning of Megan Young as Miss World 2013, though, the pressure must have doubled, even tripled. At this point, she should be exerting extra effort to shine en route to hopefully successful results in the finals night come Thursday night, October 3. 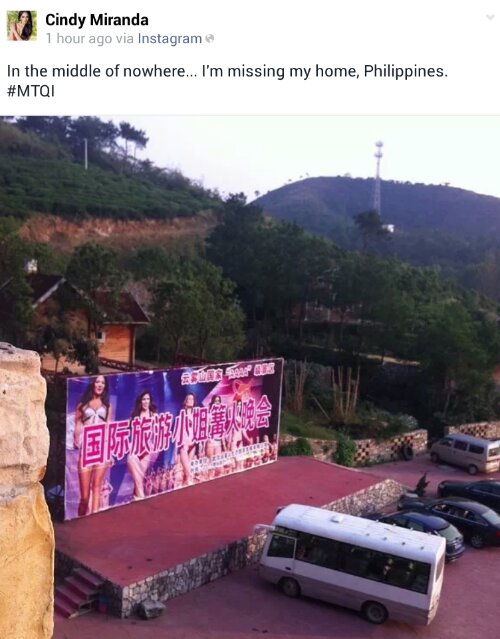 Missing home while staying in the middle of nowhere, our Cindy is.

There are remarks that she might just be headed for disappointment given the fact that the competition is being held in China. But looking back, it is also in this country where Justine Gabionza won Miss Tourism Queen International 2006. That was more than seven years ago, however. And so many things have already happened between the Philippines and China since then. 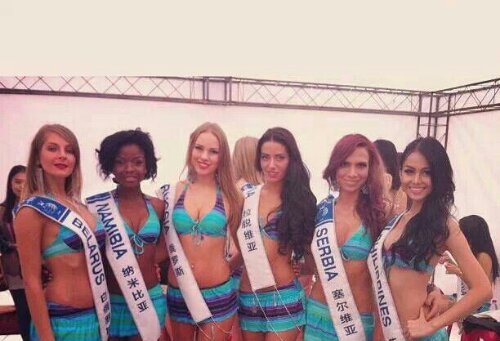 A picture of Cindy Miranda in Xianning, China.

I’ve been waiting since yesterday for something to come out regarding her quest for Miss Tourism Queen International 2013. This is a good start at least.

Isn’t she just a stand-out above? 😉 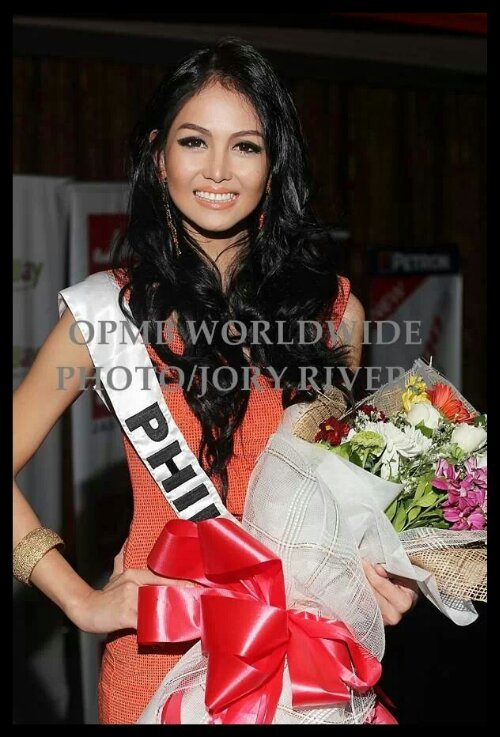 The Official Send-off for Bb. Pilipinas Tourism 2013 Cindy Miranda got underway this afternoon at Gateway with the presence of fellow Bb. Pilipinas Gold sisters lending some glitter to the occasion.

Come Sunday, Cindy will be flying to Xianning, China to try and win our 2nd (or 3rd depending on what will happen come September 28) Grand Slam crown for 2013 – Miss Tourism Queen International. Finals night for the pageant will be on October 5.

We wish our representative the best as she gives her 100% to do the country proud in China.

Cindy Miranda will be leaving for China soon! 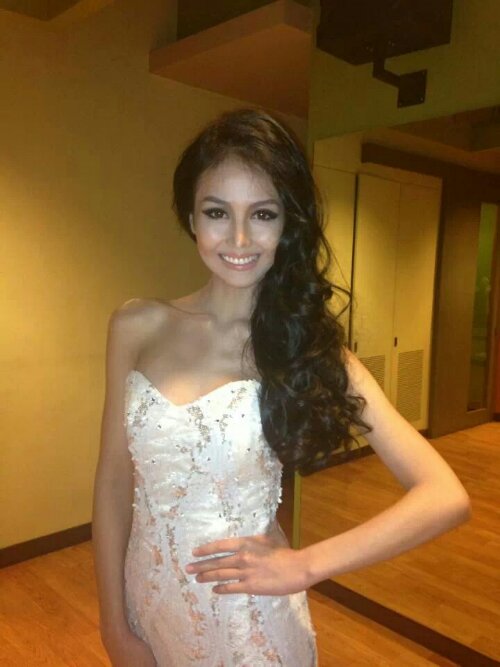 Bb. Pilipinas Tourism 2013 Cindy Miranda is all set to leave for China on the 22nd!

Just when Bb. Pilipinas-Tourism 2013 Cindy Miranda thought that all is lost with her international pageant representation, a glimmer of hope came her way as Miss Tourism Queen international 2013 is now all systems go in Xianning, China for an October 5 finals.

This coming Sunday, September 22, she will finally depart for the host city. The official send-off should happen any day now, and although it may look rushed, anything is better than none. The more important thing is that our “Asian Barbie Doll” won’t be wasted during her reign.

Her training is wrapping up. Her wardrobe is now being finalized. And Cindy has already psyched herself up for whatever eventualities await her in the mainland. 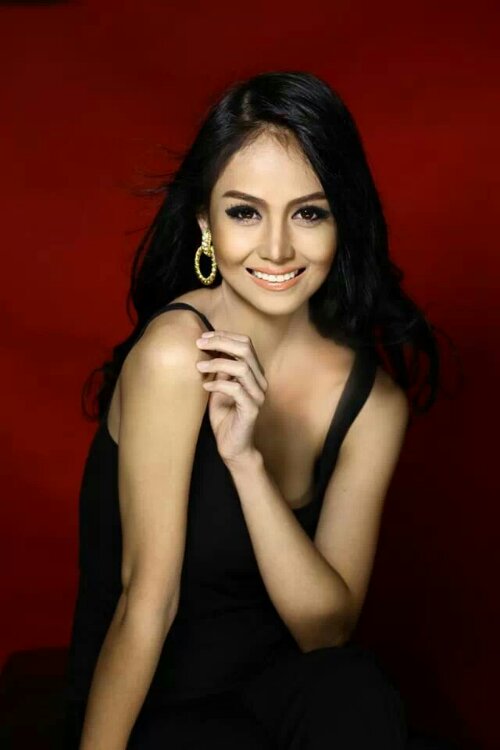 Bb. Pilipinas-Tourism 2013 Cindy Miranda must be heaving a sigh of relief. Now that Miss Tourism Queen International 2013 has been green-lighted for an October 10 finals in China, she is deep in training with Aces & Queens together with Miss Universe Philippines 2013 Ara Arida.

Cindy should be leaving for Mainland China later this month, with a send-off possibly next week. The competition was initially scheduled for Lhasa, Tibet, but major changes happened in the hosting duties.

I’m glad the Tourism title is pushing through with a representation. It’s such a waste if Cindy won’t be given the chance to compete abroad, given that the girl is really hyped to wear the Philippine sash. 😉

What’s a Bb. Pilipinas title without international pageant representation? Bb. Pilipinas-Tourism 2013 Cindy Miranda should ask her predecessor – Katrina Dimaranan – who was left out in the cold when her supposed overseas assignment failed to materialize. Nobody to blame but the organizers of the China-based competition.

The good news is that the holding of Miss Tourism Queen International 2013 (which was supposed to be held last December 28, 2012) will most likely push through (especially after the recent selection of China’s rep to the same). I don’t even want to ask if BPCI will still choose between her and Katrina on who will make the trip if ever. Being the reigning winner, she should feel confident of stepping up to the task and wearing the country’s sash with pride.

Cindy can only hope for the best. I’m pretty sure she will give her all to shine bright in the international stage. 😉