Her reign as Bb. Pilipinas International 2015 may be over, but Janicel Lubina is moving ahead according to her own working pace. She is picking up all the opportunities that come knocking at her door with a grateful heart. And knowing how hardworking she is as an individual, the chances of getting offers from different corners are bright. It could be pageant judging, personal appearances, TV guesting or, just like last night, as “sagala” (flower maiden) of Designer Sony Boy Mindo for the 37th Flores de Mayo 2016 at the SM Mall of Asia. The possibilities are just there for the picking.

Janicel may no longer have the chance to pursue any other pageant channels (the risks far outweigh the potential benefits), but she is looking beyond the crown and taking all the options with an open mind and a generous (to her family in Palawan) heart.

Good luck in all your future plans, my dear Janicel! 🙂

It was a 2-in-1 affair for Janicel Lubina and Rogelie Catacutan (Photo credit: Bruce Casanova for Bb. Pilipinas)

Janicel and Rogelie with Ann and Christi

Both Rogelie and Janicel were misty-eyed as they were given words of encouragement and approval from everyone. As we all know by now, the latter made it to the Top 10 of Miss International 2015 and was awarded Miss Best Dresser during the finals last November 5. On the other hand, our pretty Cebuana will be departing for Poland soon to start with her quest for the Miss Supranational 2015 crown and hopefully become the country’s 2nd big winner of the title.

From all of us here at normannorman.com, welcome back, Janicel! And to our dear Rogelie, may you have the best experience in Poland, while working hard to get the crown for the Philippines. Do us proud! 🙂 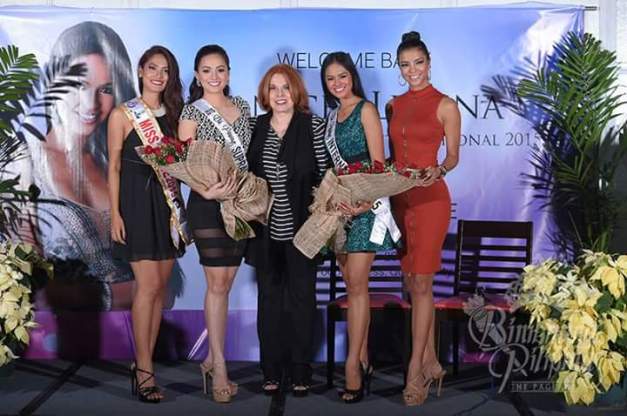 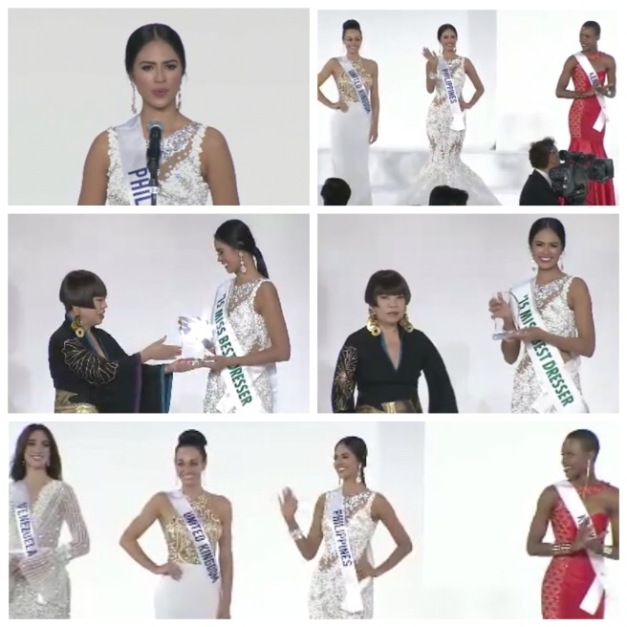 Many pageant fans followed the live streaming of Miss International 2015 during the afternoon-till-early-evening of November 5. While the feed was such a test of patience considering the frequent hangs, long breaks and imperfectly-timed freezes, nobody dared abandoning the entire program that lasted for practically four (4) hours. After all, Miss Philippines Janicel Lubina stood an excellent chance of winning the country’s 6th Miss International crown. And by the way she presented herself during the three major segments, there was simply no way of getting ignored by the judges.

But after the winner and four runners-up were announced, our bet was nowhere to be seen, except in the background. Sure, she made it to the Top 10. But to have no place in the magic circle at the very least was something hard to fathom for everyone glued on the online telecast.

None. At. All. Nothing went wrong with the over-all performance of Miss Philippines Janicel Lubina during the finals of Miss International 2015 yesterday afternoon till early evening. She was divine in National Costume, smoldering hot in Swimsuit and utterly elegant in the Leo Almodal Evening Gown. Even her speech – while countered by some as coming off a bit too rehearsed – still had the right of emotions and drama into it. She was, quite simply, an effortless standout in all her presentations.

The truth of the matter could be this. The judges had their eyes on Edymar Martinez of Venezuela all along. And if they had a closest pursuer in mind, it would only be 1st Runner-Up Jennifer Valle of Honduras as next option. Nothing can be done about that. Not even the most spectacular turns will make them change their minds, I reckon. They really zeroed in on Osmel Sousa’s ward even before the final results were deliberated upon.

Let’s not overthink the reasons behind Janicel’s snub in the Top 5. It is possible that the final speech could have been interpreted by the decision-makers as too melodramatic for comfort. But focusing on the real facts that made her a Cinderella story in the first place is something that can’t be helped.

I salute our representative for giving it an excellent fight. And while the Miss Best Dresser award serves as a mere consolation of sorts, it still gives the recognition to the wearer, the designer Leo Almodal and the style team which planned the pre-pageant and finals wardrobe like a well-plotted gameplan.

Janicel will return to the Philippines with head held high. She still delivered on the international pageant stage. If only the eventual winner did not have the impenetrable halo effect glowing all over her, then things might have turned out differently.

The winners during the post-coronation party 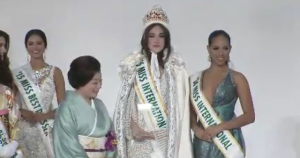 The 7th. Edymar Martinez is now the 7th Venezuelan to win the Miss International crown after she was named successor of last year’s Valerie Hernandez hours earlier at the Grand Prince Hotel Takanawa in Tokyo, Japan.

Going into the finals, Edymar was the #1 pick of most pageant sites and predictions as the candidate most likely to win it all. And she delivered. This despite the very strong showing of Miss Philippines Janicel Lubina who placed in the Top 10 and was awarded Miss Best Dresser before the announcement of the Top 5 titleholder and runners-up.

Coming in as 1st Runner-Up is another heavy favorite, Jennifer Valle of Honduras. Eunice Onyango of Kenya came in as 2nd Runner-Up, with Pham Hong Thuy Van of Vietnam and Lindsay Becker of the USA claiming 3rd and 4th Runners-Up, respectively.

Five (5) delegates were earlier sashed as the continental winners, namely, Eunice Onyango of Kenya for Africa, Park Ah-reum of Korea for Asia, Laura Marceia Ruiz of Aruba for Americas, Brianna Acosta of Hawaii for Oceania and Isabel Vieira of Portugal for Europe.

Osmel Sousa must be one proud mama once again!

The 10 Ladies who could become Miss International 2015

I am basically going for Venezuela, Honduras and the Philippines for my Top 3.

Miss International is known to favor both popular winning countries and come-from-behind/less hyped nations as their winner. Venezuela and the Philippines are almost always there. But Honduras could be the girl to provide a major upset if ever. It has the potentials of assuming this year what Costa Rica had back in the day when it won its first Miss International crown. And this Honduran fits the peg of the Japanese organizers for the top spot so well.

The 4th on my list is Hungary which could also be a strong spoiler next to Honduras. And by spoiler, I mean a country that still has not pocketed the Mikimoto head adornment to date. And just to complete a Top 5, I will throw in Brazil in the mix.

As for the remaining ladies in my Top Ten, I can see them providing good competition, but not to the iron-clad levels of the quintet in the upper tier. Mexico and the USA could steal the limelight, but only by a long shot.

For now, I am selecting Edymar Martinez as #1 pick, but not in such a solid hold. She can still be toppled by either Jennifer Valle and Janicel Lubina if the judges’ halo go in their favor.

Let’s see what will happen in Tokyo tomorrow early evening. 😉

What could be Janicel’s chances in Miss International 2015?

Some keen observers of Miss International 2015 are saying that Miss Philippines Janicel Lubina could be losing steam in the homestretch of the competition. There are those stating that she may have started feeling the heavy weight of the other candidates who play the game with clockwork precision and cut-throat presentation of themselves in all pre-pageant activities. I bet a number of them may be basing it on pictures that have flooded the Facebook page of the pageant wherein our bet has slowly been showing up in trickles and getting photographed in less memorable poses (like the one on the left). 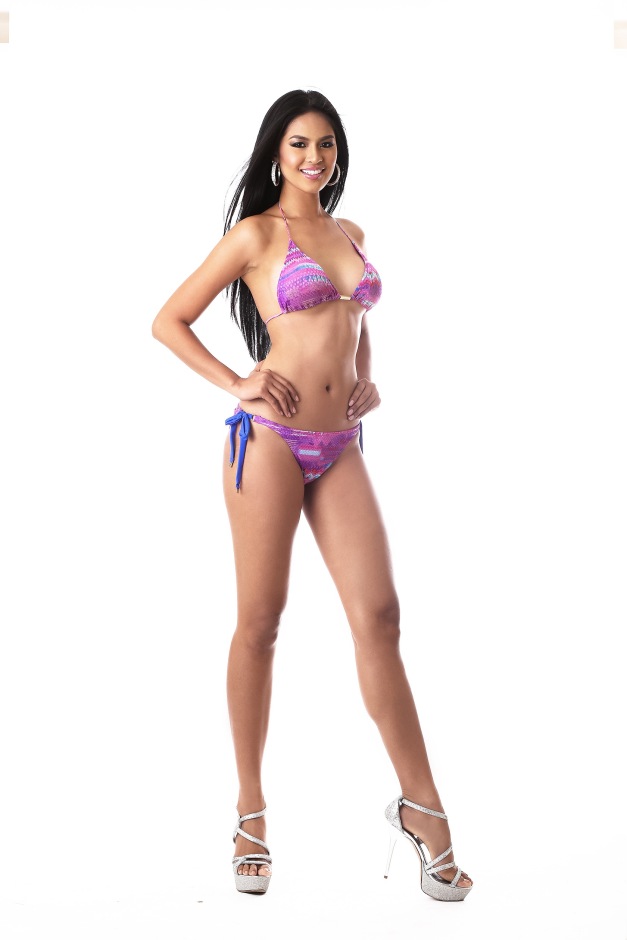 Another Janicel Lubina by Raymond Saldaña

But I beg to differ. My hunch is that Janicel is still doing strong. I may not be inclined to predict that she will do a Bea Rose Santiago just yet, but that’s only because I still haven’t seen what Evening Gown she will wear during the finals. Interviews wise, I bet she showed her charm and sincerity to the judges. And don’t count her swimsuit presentation out. She will have easily nailed that part easily.

So all in all, I still believe Miss Philippines has a good chance of making it. I’m quite sure of aa Top 10 placement for now. Let’s see what aces she still has up her sleeves when it matters most. 😉 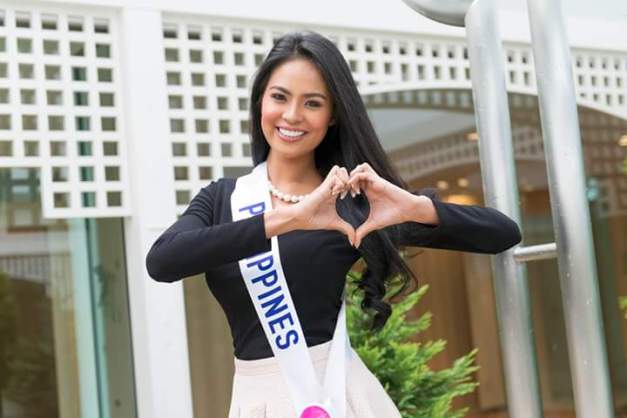 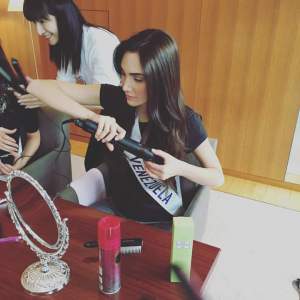 Recently, the Miss International 2015 candidates had a fun shoot with one of the pageant’s major sponsors, Panasonic Beauty Japan. And this could be their most laid-back photo gathering so far. Miss Philippines Janicel Lubina is looking gorgeous as always. Of course, this is the part of the competition period where everyone is already stepping up higher than ever before. It’s nearing the homestretch before the big judgment night on Thursday, November 5. And the way I see it, our bet has a very formidable opponent in Miss Venezuela, Edymar Martinez, who is being buzzed as the strongest favorite to win the crown this year. This Latina is just too hard to ignore, what with her constantly flawless presence and charm.

What are your thoughts, dear readers? Do you think that Osmel Sousa will have his final laugh once more? Or does our Janicel still have the chance to eke a victory despite of the growing popularity of Edymar? 🙂 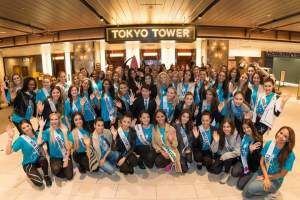 While your blogger has already enjoyed Tokyo Tower in all its gigantic glory (I remember staying with the family at the Tokyo Prince Hotel – located just in front of the large structure – during my first trip to the Japanese capital), he still has yet to spend/experience Halloween in another country.

The Miss International 2015 Candidates did just both. They were given a grand tour of Tokyo Tower and got elevated to the top floors where they were treated to Halloween-themed designs and had fun wearing masks and all the frills of the scare-inspired activity.

Meanwhile, judgment day is drawing near and the organizers have released the list of judges who will select the next Miss International. Included in the panel is reigning titleholder Valerie Hernandez of Puerto Rico.

Let’s hope our Janicel has already earned enough plus points to carry her through the minds of the decision-makers. 🙂 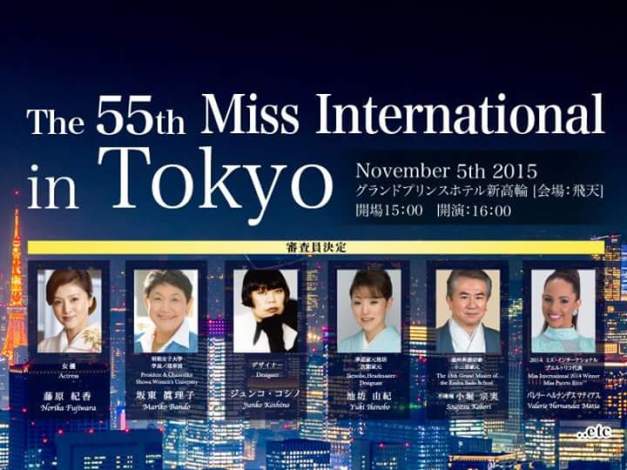 The Board of Judges for Miss International 2015

One of the Pre-Pageant activities of Miss International 2015 is the Miss Visit Japan Tourism Ambassador Appointment Ceremony where all the delegates attended, including our very own Miss Philippines Janicel Lubina.

While it still remains unclear to me if the purpose of the whole exercise is to actually appoint all the contestants to individually encourage people from their respective countries to plan a visit to the Land of the Rising Sun and promote tourism, it looks to me that way.

While we’re at it, how do you size up Janicel’s outfit during the same? Thumbs up, passing or just pass it away? 🙂 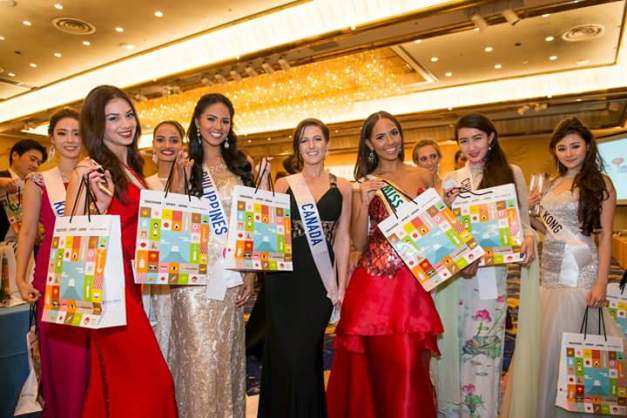 Miss International 2014 Valerie Hernandez (3rd from right) with the other delegates, including Janicel (2nd from left)

An Extra Serving of Janicel in Japan 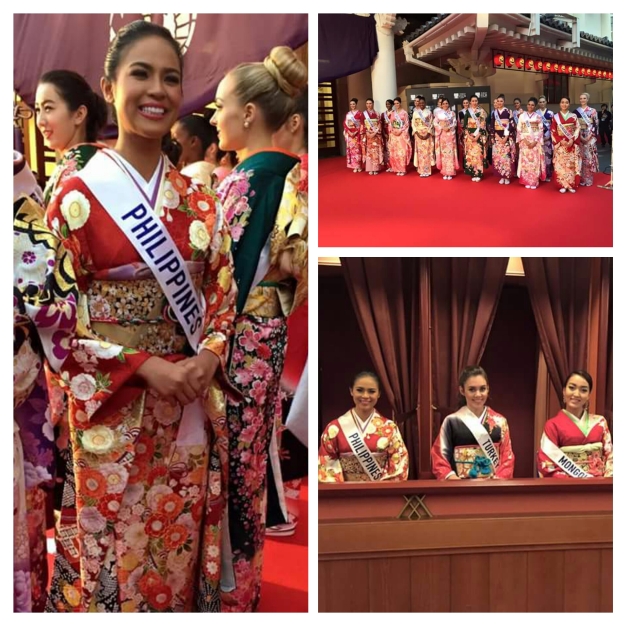 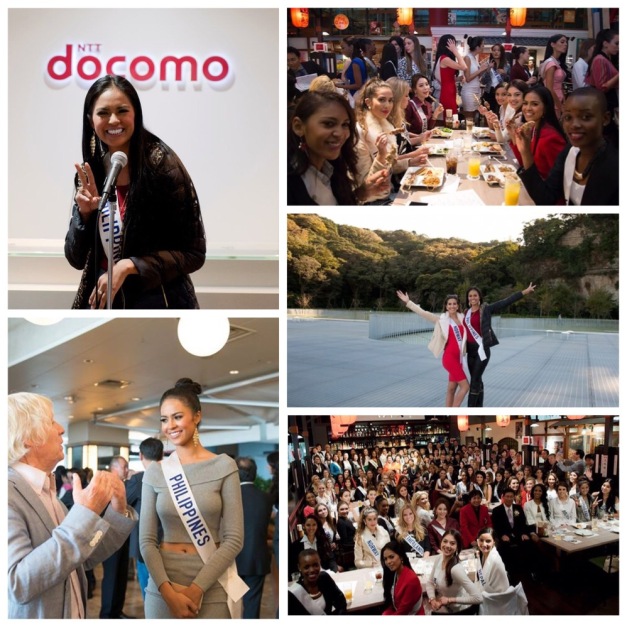 From sponsor visits to lessons about Japanese Culture to wearing the traditional Kimono to dinner events to fun shopping to charity appearances for children to simple photo ops with the candidates in the streets of Tokyo, Miss Philippines Janicel Lubina is taking it all in with a big smile and a friendly demeanor. Never mind if she is engaged in a conversation with the locals who can speak more Nihongo than basic English, she still shows sincere interest in understanding others. And from where I stand, my gut-feel is that she is collecting admirers by the day. And who wouldn’t be captured by her innate charm?

Anyways, enjoy more of our representative in her random photos all over this post. 🙂