Throwback photos: Miss Universe 1999 (and where is Mpule Kwelagobe now?)

Here are memorable throwback photos during the finals of Miss Universe 1999 when Mpule Kwelagobe of Botswana reacted as she was named winner over our very own Miriam Quiambao (left) who finished 1st Runner-Up plus an small assortment of other images taken in Chaguaramas, Trinidad and Tobago last May 26 1999 by Getty Images. 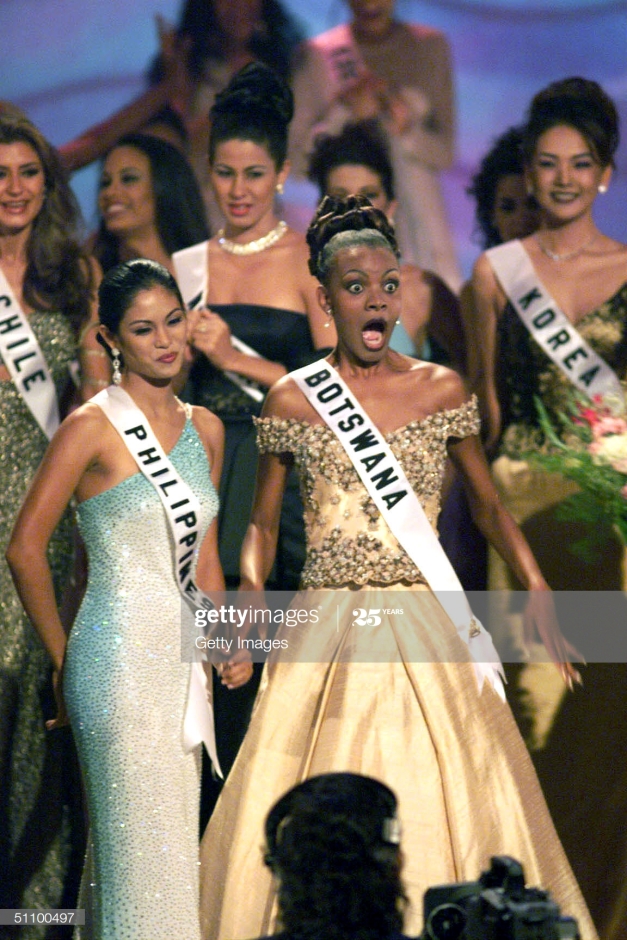 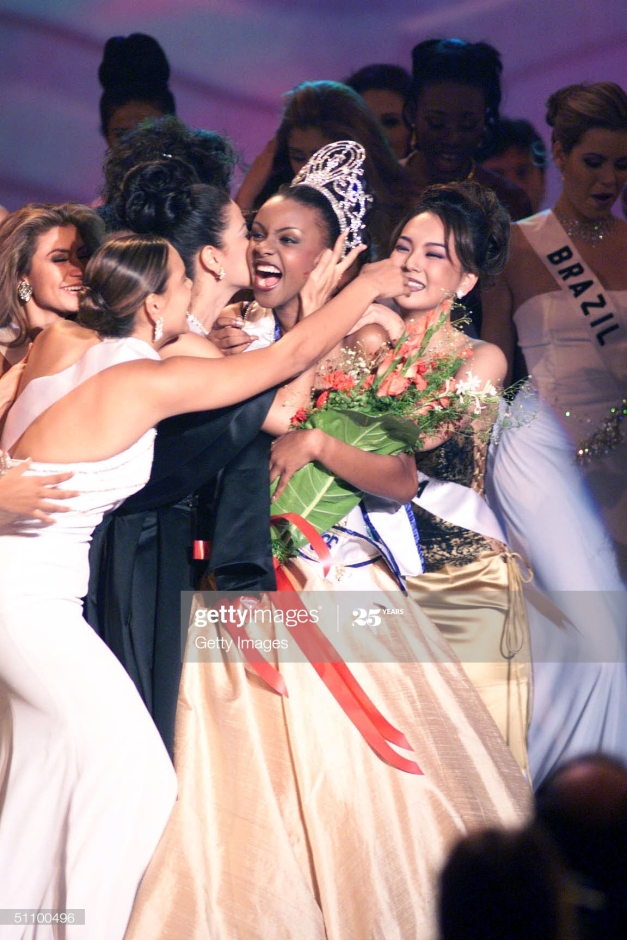 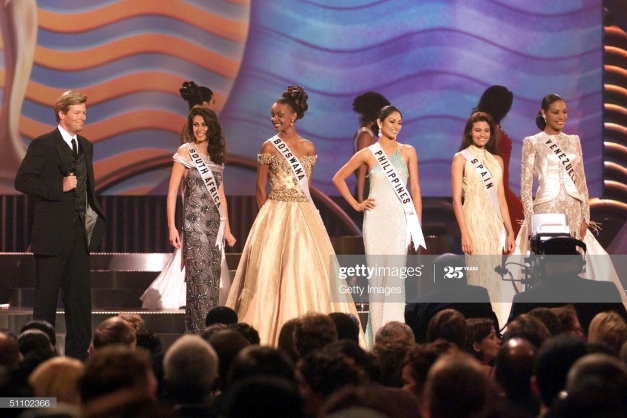 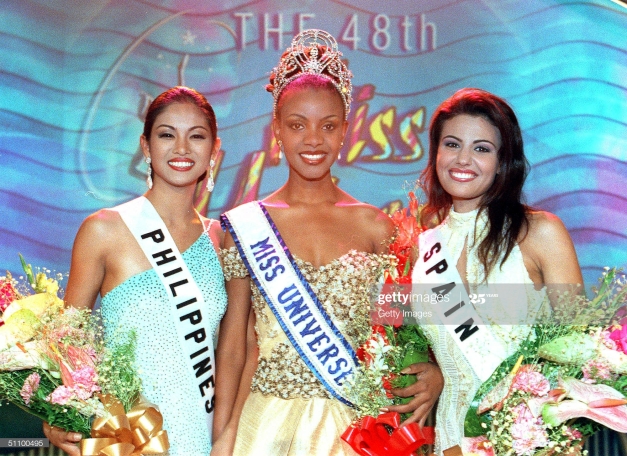 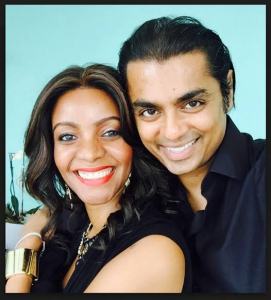 As for her personal life long after winning the crown, Mpule married Indian-American financial consultant Abhijoy Gandhi in 2015, in four separate ceremonies held in Kanye Village, Botswana, New York City, and India. The two of them are considered one of Botswana’s popular power couples.

According to Mpule herself:

”The business we are into is divided into three categories namely: financing, agriculture and global energy. For us it’s not just about business but rather a legacy we want to leave behind. We share a common goal with hubby which is simple; youth empowerment.

Bb. Pilipinas 1999: The Year when Miriam Quiambao claimed her Miss Universe fate and became the Philippines’ first 1st Runner-Up in the pageant 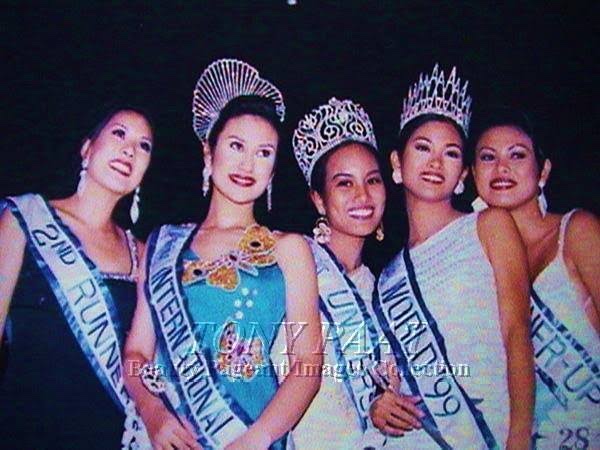 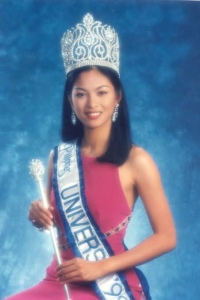 1999 was bittersweet for all its worth for Bb. Pilipinas. Bitter because for the second consecutive year (<em>and third overall if I’m not mistaken</em>), the crowned winner of the Bb. Pilipinas Universe title – Janelle Bautista – was dethroned because of citizenship problems. Sweet because – in her place – the original Bb. Pilipinas World Miriam Quiambao took over and went on to place 1st Runner-Up to Mpule Kwelagobe of Botswana in Trinidad and Tobago. Up to now, I really feel that Donald Trump gave the thumbs-up for Miss Philippines to win that year. The Final 3 Q&A, though, really got into the nerves of Miriam and had to be happy with her placement – the first ever second-place finish for the Philippines in Miss Universe. As for Lalaine Edson getting promoted to Bb. Pilipinas World, I really had my reservations because she was just this fair-skinned halfie who must have been greatly helped by the influence of the late German Moreno in getting a crown in the first place. 2nd Runner-Up Joelle Pelaez or 1st Runner-Up Michelle Arcangel were more deserving in my opinion. And we all know now what happened to Lalaine in London for Miss World – during especially after the competition when she went “missing” and was reported to have been “kidnapped” by a foreigner-lover and forced into marriage. I bet our regulars here know more about those mysterious circumstances. 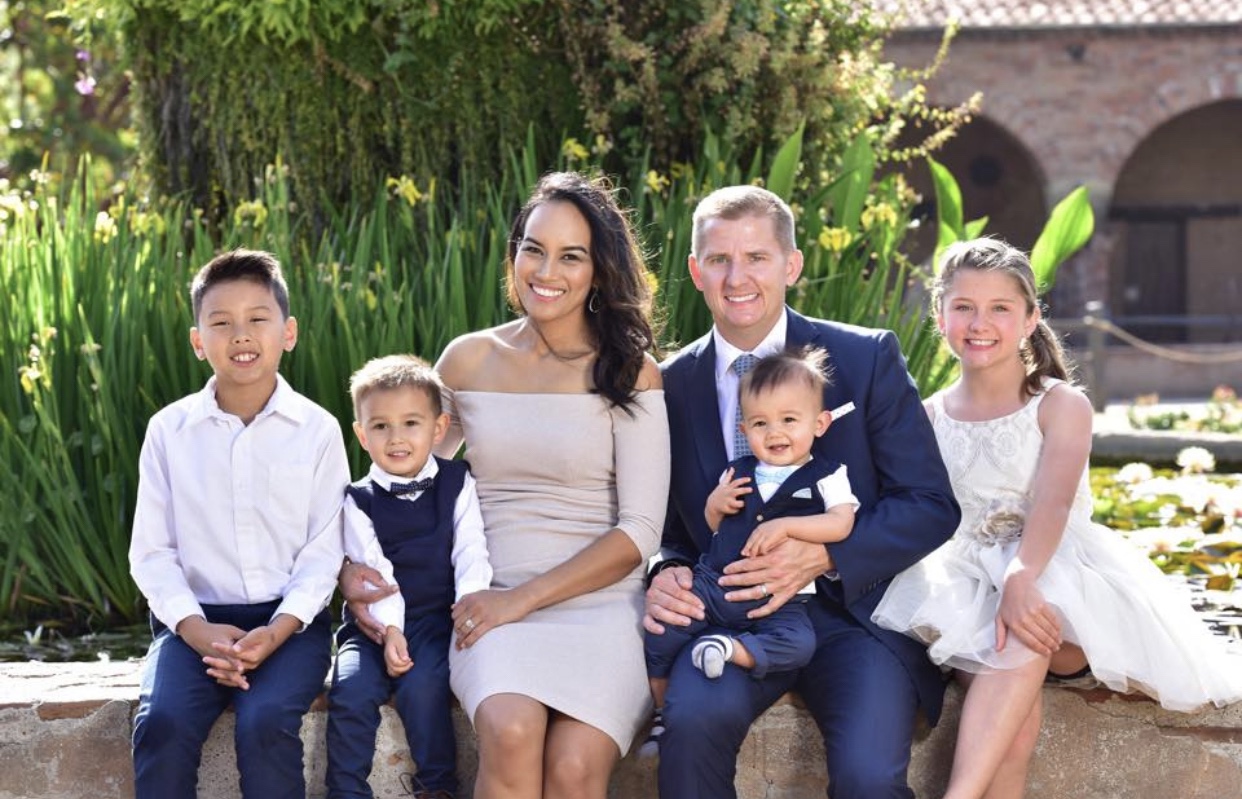 Janelle Bradford (nee Bautista) with her husband and children

On the Record CNN Philippines December 20, 2018 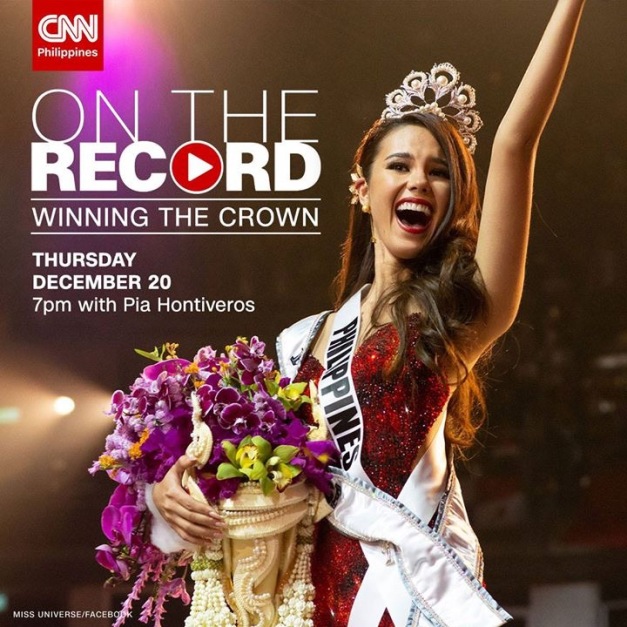 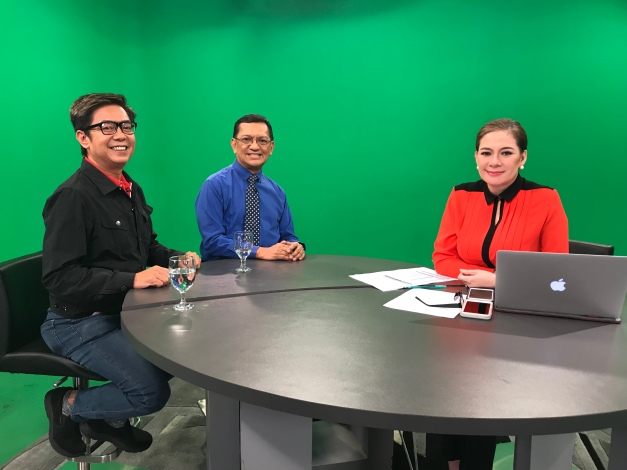 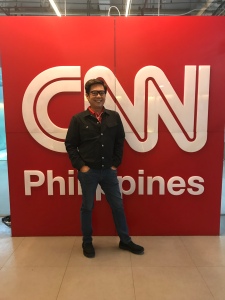 Last night, your blogger – along with Gerry Diaz of Aces & Queens and MU1999 1st Runner-Up Miriam Quiambao (via Skype) – guested on the CNN Philippines program “On the Record” with host Pia Hontiveros-Pagkalinawan. The topic was Miss Universe 2018 Catriona Gray and the seriously rumored takeover of the Miss Universe Philippines franchise by the group of Gov. Chavit Singson. 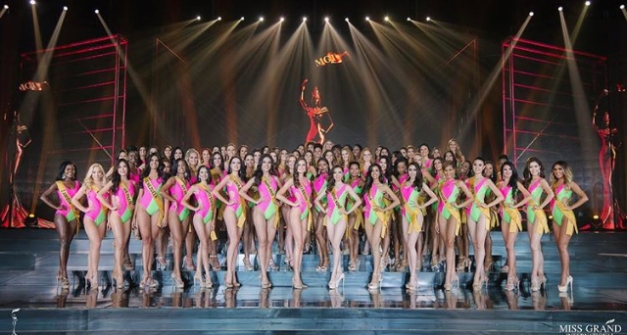 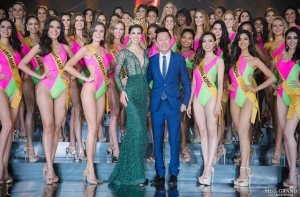 Miss Grand Philippines Eva Patalinjug tripped on her evening gown during the Preliminaries of Miss Grand International 2018. It was neither as slight as that of Pia Wurtzbach’s when she was approaching centerstage during MU2015 nor as floor-reaching as Miriam Quiambao’s during MU1999. She quickly recovered as expected.

How are you reading into it, guys? 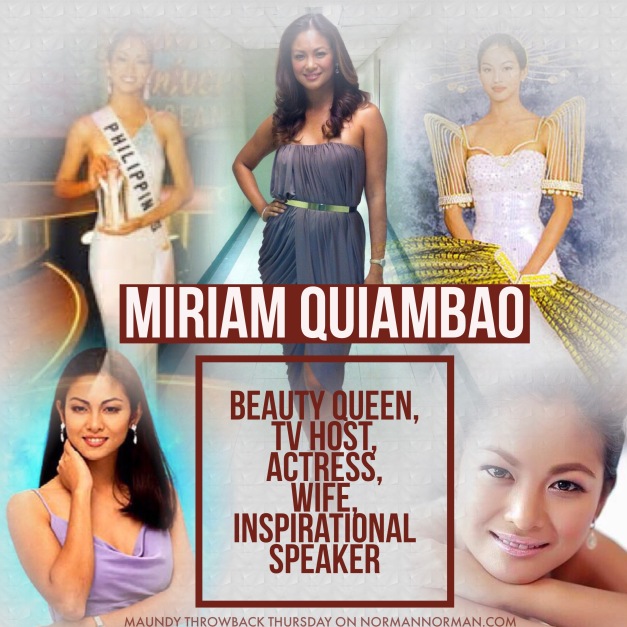 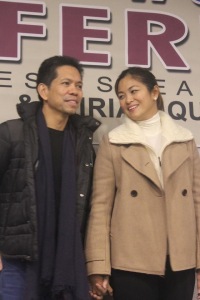 Bb. Pilipinas Universe 1999 and Miss Universe 1999 1st Runner-Up Miriam Quiambao-Roberto is a fitting subject for this Maundy Throwback Thursday entry because she has already evolved right in front of our eyes from beauty queen to TV host to teleserye performer to film character actress to wife and now, an inspirational speaker along with husband Ardy Roberto who is a bestselling author. The two of them travel to different places around the Philippines and other countries to speak in front of our kababayans about the Word of God while lifting their spirits up while working overseas away from their loved ones.

Watch the testimony of Miriam on 700Club Asia:

Now here is a TV interview of Miriam (and husband Ardy) on GMA-7’s Powerhouse almost three years ago.

Let us look back now at the pageant peaks of Miriam during Bb. Pilipinas 1999 and the Miss Universe edition the same year.

So as a last video, here is the audio interview of Miriam on The Tao of Self-Confidence last year. This one makes her an appropriate source of inspiration in this – the midst of Holy Week. 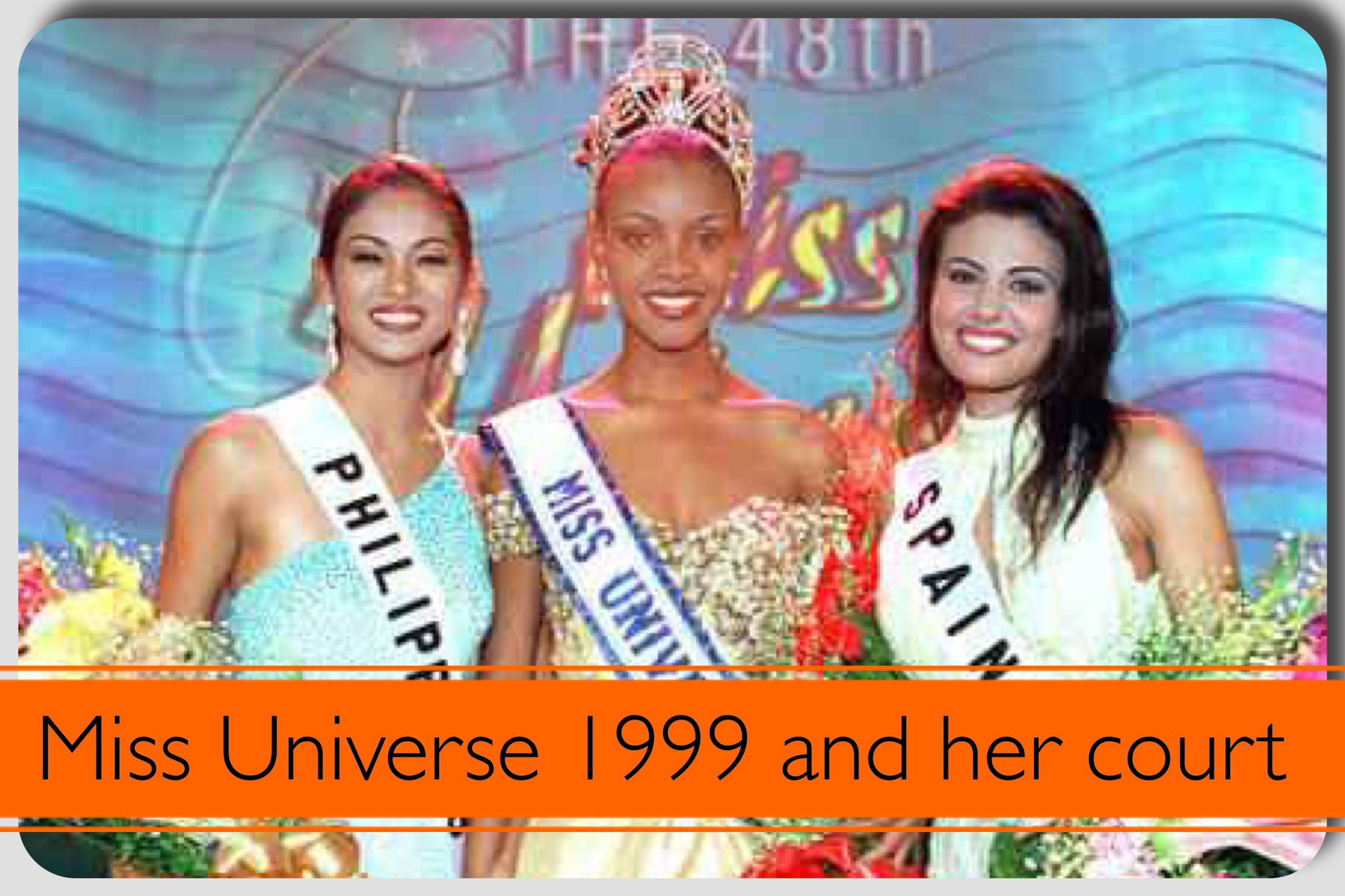 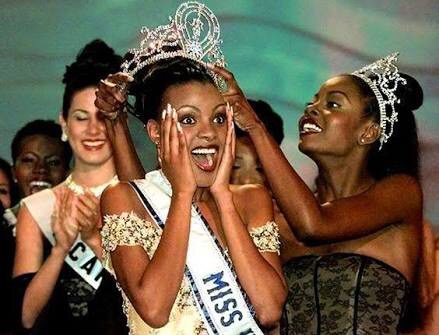 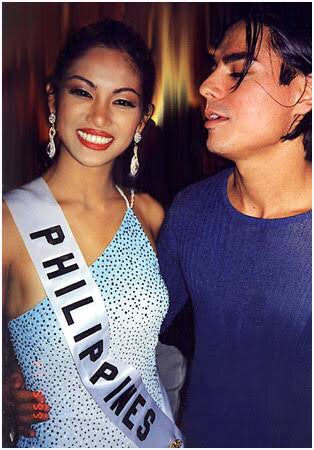 In my mind, Miss Universe 1999 will always be worth remembering, not only because our very own Miriam Quiambao placed 1st Runner-Up and could have been our 3rd Miss U more than 16 years ago. Rumor has it that Donald Trump already approved of her winning provided that the final answer in the Final 3 will be handled well. Sadly, it wasn’t meant to be. I sat glued to the set like a leech, missing lunch and disappointed that the final results were so close to our favor but still not there.

At any rate, the atmosphere of that edition will long be remembered for having such an all-around festive atmosphere that was both festive and pulsating. The music, the performers, the limbo dancing, the candidates, the swimsuits, the gowns, the judges, the then-popular host (Jack Wagner) – everything contributed to a finals night that will always be looked back upon as evoking the authentic spirit of the Carribean and everything that comes with the colorful flavor of Trinidad & Tobago.

Posted by Norman on March 20, 2015
Posted in: 2 Shout-out-Looks. Tagged: He Can Catch You When You Fall, Miriam Quiambao, National Bookstore. 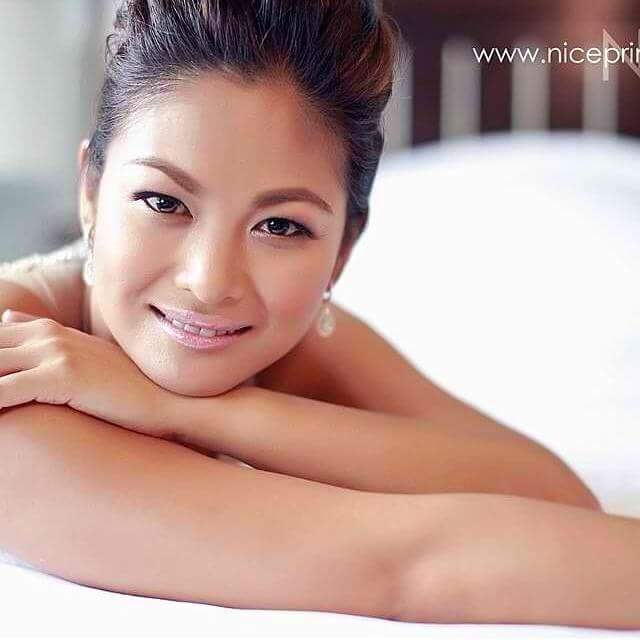 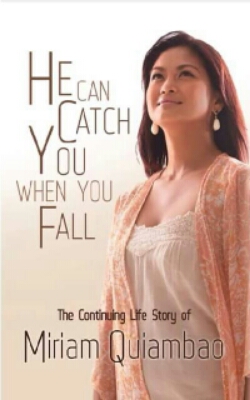 While the book may have already been released last year, “He Can Catch You When You Fall” is getting a second wind with a book signing activity tomorrow at National Bookstore in Glorietta.

Catch Miss Universe 1999 1st Runner-Up Miriam Quiambao and get a chance to have your copy of the book signed by her. And while you’re at it, have a quick photo op with her as well.

It’s all happening mid-afternoon of March 21. So if you’re a fan and still don’t have the book, head off to the activity and maybe get to ask a question or two. 😉

Sunday Senti Specials: The Philippines and Miss Universe by Years and Numbers 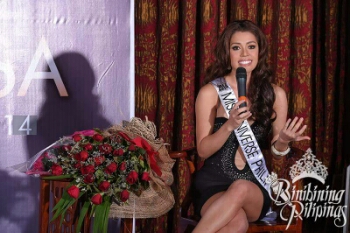 MJ Lastimosa during her homecoming presscon

As we close another complete chapter of international pageantry with the crowning of the 63rd Miss Universe Paulina Vega a week ago, allow me to reminisce on the Philippine participation in the same, with focus on the achievements we have made.

Yesterday, I gathered from reliable sources that Miss Universe Philippines 2014 Mary Jean ‘MJ’ Lastimosa actually finished 6th overall (how heartbreaking!) in the competition. She lost by a mere 0.625 of a point to Yasmin Verheijen of the Netherlands going into the Top 5.

Now if only she entered the magic circle and notched 2nd Runner-up at least in Miami, then the country would’ve already conquered all possible placements in our favorite beauty pageant.

Watch the video below showing our Miss Universe reps from 1952 to the 63rd edition.

The Iglesias Brothers for the 63rd Miss Universe Pageant 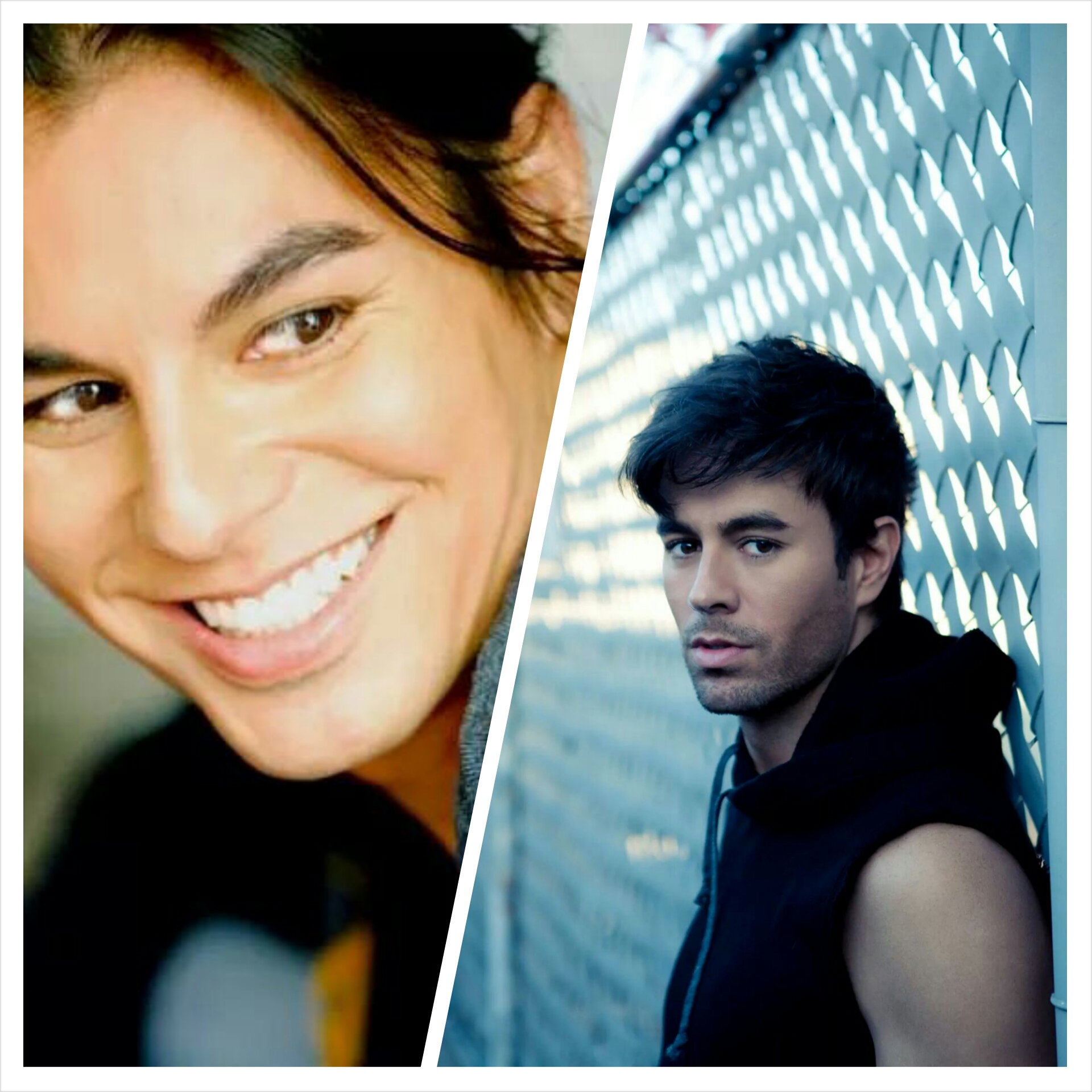 Julio Iglesias, Jr. (left) and Enrique Iglesias will be the guest performers for the 63rd Miss Universe Pageant in Doral Miami 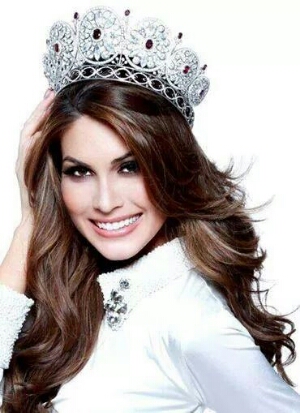 For the January 25 finals of the 63rd Miss Universe Pageant in Doral Miami, there will be two international guest performers – brothers at that. Enrique Iglesias and Julio Iglesias, Jr. will be coming to entertain the worldwide audience as well as sing to the ladies during their separate spot numbers.

You will all remember Julio Jr. as the singer during the 1999 Miss Universe Pageant in Trinidad and Tobago when our very own Miriam Quiambao made it all the way to the Top 3 and clinched 1st Runner-Up to Mpule Kwelagobe. Will he bring good luck to our MJ Lastimosa? And will the luck be even greater with Enrique around?

I can already visualize a highly entertaining show at the FIU Arena. And it is possible that the more popular Enrique will perform the English version of his song “Bailando” as shown in the video below. 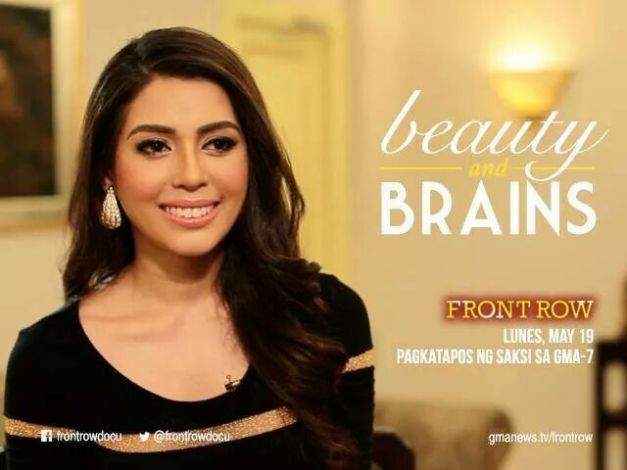 Last Monday night, a documentary by Derick Cabrido – titled “Beauty and Brains” – was shown on GMA-7 after the late evening news ‘Saksi’ during Front Row. It featured Miss Universe Philippines 2014 Mary Jean ‘MJ’ Lastimosa and her long journey to the crown. Former Bb. Pilipinas winners were also included in the same.

In case you missed it, watch the video below.