Tonight is the Grand Coronation of the first-ever Hiyas ng Pilipinas. And from among the 33 Official Candidates in the running, there is a serendipitous regard for the presence of the strong Cebuanas. From where I blog, you cannot deny the fact that they are forces to reckon with. True, there are representatives from other cities or provinces who are also crown-worthy. And with three major titles at stake, I won’t be surprised if Cebu takes two of the honors – at least.

Be that as it may, here is my Final Selection of Twelve (12) ladies who I feel will figure out strongly on the judges’ scoresheets (on top of the already-graded performances during the Preliminaries):

Best of luck to all the ladies!

And kudos to the organizers of the pageant. I doff my hat to all of you! 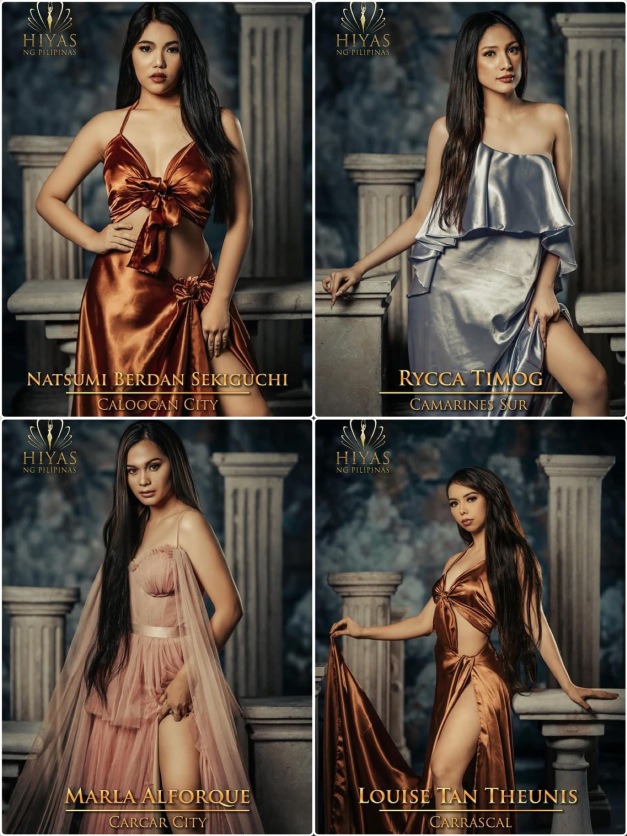 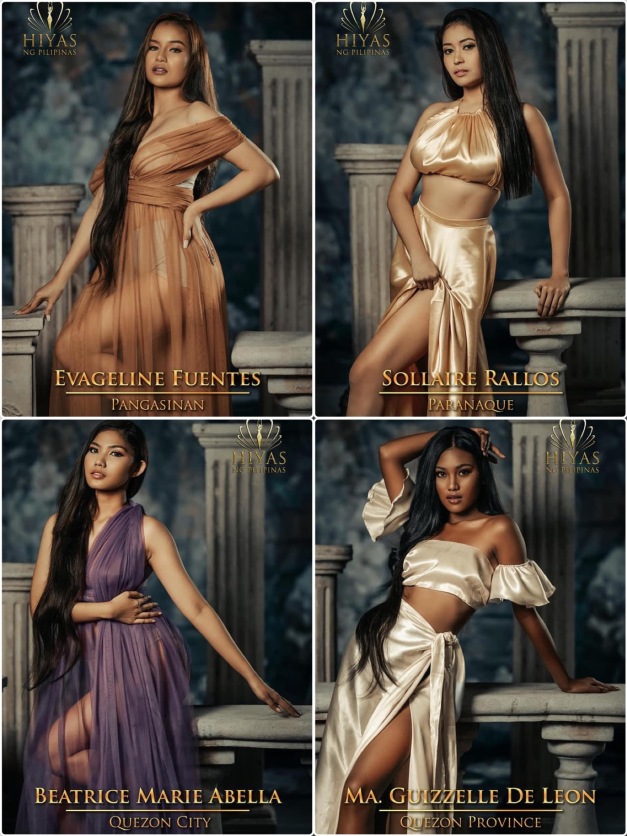 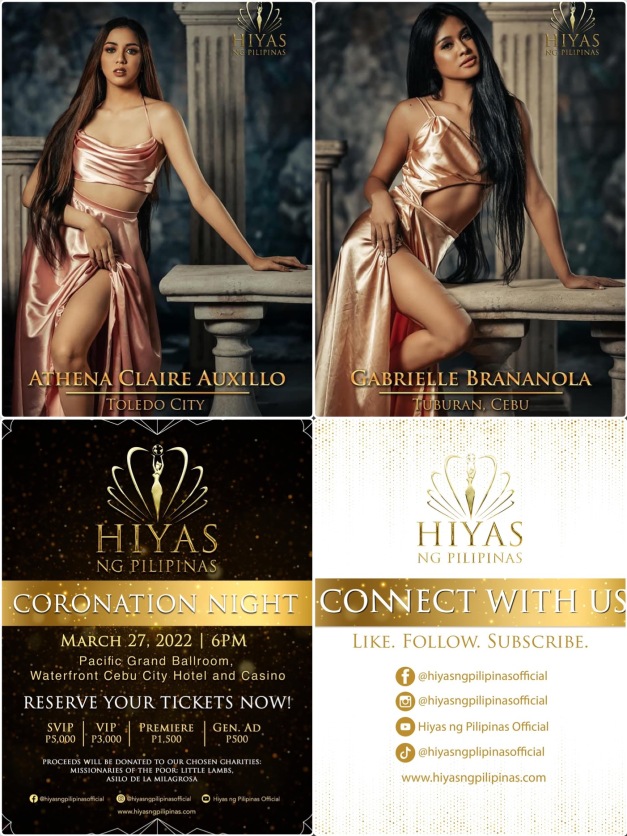 Presenting the Hiyas ng Pilipinas 2022 Official Candidates in their Greek-inspired shoot for the competition.

Who among these 34 ladies will bring home the three (3) crowns #HiyasNgPilipinas2022 on Finals Night?

Send them a message to get your pass or visit us at the Hiyas ng Turismo Pilipinas Foundation Inc Office, Lightsite Parc in Mandaue City. 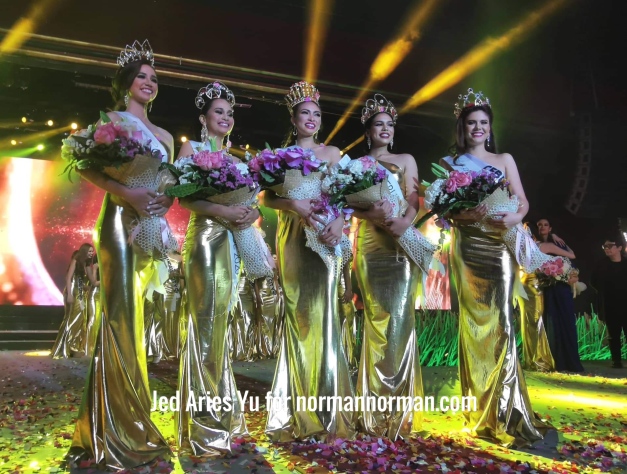 A new Binibining Cebu has been crowned, and just as I had predicted, Beatrice Luigi Gomez came out as the big finisher. She is the third titleholder of the pageant and the first openly lesbian winner at that. She was crowned by last year’s Steffi Aberasturi along with Miss Universe 2018 Catriona Gray, Cary Santiago and Kenneth Cobonpue.

Tomorrow night, January 13, a new Binibining CEBU will be crowned along with four other titleholders who will carry the name of the province for #Tourism, #Charity, #Heritage and #Ecology.

From among the 54 lovely contenders for the 3rd Edition, I took the liberty of short-listing normannorman.com’s Twenty (20) favorites who are likely to move forward in the competition. In alphabetical order now by municipalities represented:

From the twenty (20) I chose above, the next cut is already a gathering of the best in the batch in my opinion. And so, my Top 12 choices are named below in the order of municipalities represented. It wasn’t easy, but here goes my trimmed-down list:

The battle royale for the successor of Steffi Aberasturi remains to be tough. But honestly, I have already made up my mind on two (2) delegates as the ones who could do a showdown till the very end. And to complete the magic circle of titleholders, I just added three more names as deserving podium finishers.

Without a doubt, my Top 2 Cebuanas are Beatrice Luigi Gomez of San Fernando and Dr. Ena Velasco of Mandaue City. Either of the two would make a wonderful Binibining Cebu 2020. The latter is familiar to everyone as the former Binibini of Batch 2018 who is now a Doctor of Medicine. The former is a popular fashion model and sport-loving personality in the Queen City of the South who continues to wow everyone in all the pre-pageant competitions. In the end, the one who gets consistent nods from the panel of judges will take it all the way. One will be the #1 finisher, while the other will get the Tourism sash.

The three other ladies I see fit to be included in the Final 5 are Marla Alforque of Carcar City, Kathlyn Lawig of Toledo City and Adriana Gravador of Cebu City South.

Thus, I conclude this by stating that my final choice to win Binibining Cebu 2020 would be any one among Beatrice Luigi Gomez and Dr. Ena Velasco. It will be a tight race. But for as long as one of them gets the biggest title, then I would be pleased.

Good luck to all the ladies! See you in Cebu!

PS. Since I will be Cebu-bound for this pageant, my daily teasers will take a rest for a day or two. But it will resume soon! 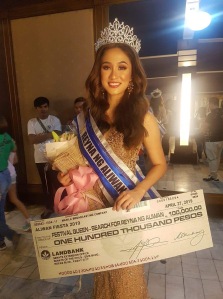 It’s only now that I am posting her video during the Q&A in the Pageant Night that I chaired for Aliwan Fiesta 2019. In it, she explained why Cebuanas have continuously dominated the search since its inception.

Below is the complete set of winners:

Since the finals of Miss Earth Philippines 2018 will have its big night at the SM Mall of Asia Arena this coming Saturday, May 19, I am sharing with you my final predictions for the pageant homage to Mother Nature based on how I see the forty-two Official Candidates vying for the top spots.

Truth be told, I am confident that the upper half of my filtered sixteen already has the eventual successor of Karen Ibasco among them. The matter is likely to be settled in the crucial Q&A. But just to complete the recognition, the ladies are: 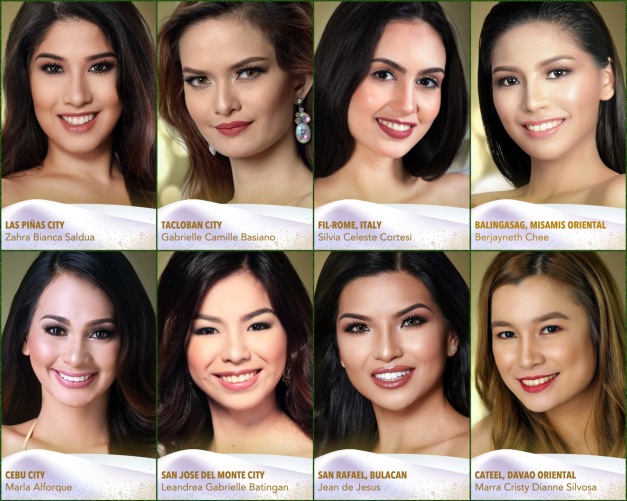 My Top 8 for Miss Earth Philippines 2018

Now let’s look at the first eight (8) in the line-up and you can see a variety of potential winners among them. Zahra Bianca Saldua is the proverbial clone of Karen Ibasco in terms of communication skills and public relations. In fact, she can offer one more advantage over the reigning titleholder because she is an effective host and speaker, not to mention the fact that she has also paid her dues in national pageantry prior to this. On the other hand, the quartet of Gabrielle Camille Basiano, Celeste Cortesi, Berjayneth Chee and Marla Alforque score extra plus points in terms of charm and physical beauty. It will all boil down as to who gets the luck in the Q&A and be asked a question that she has more than prepared for herself. Leandrea Batingan and Jean Nicole de Jesus are fighting with their special brand of beauty, people skills and back stories. So they should be able to ace their interviews during crunch time. And 8th on my tally is the possible spoiler from Mindanao, Marra Silvosa, who has steadily gained ground in the competition the past few weeks. 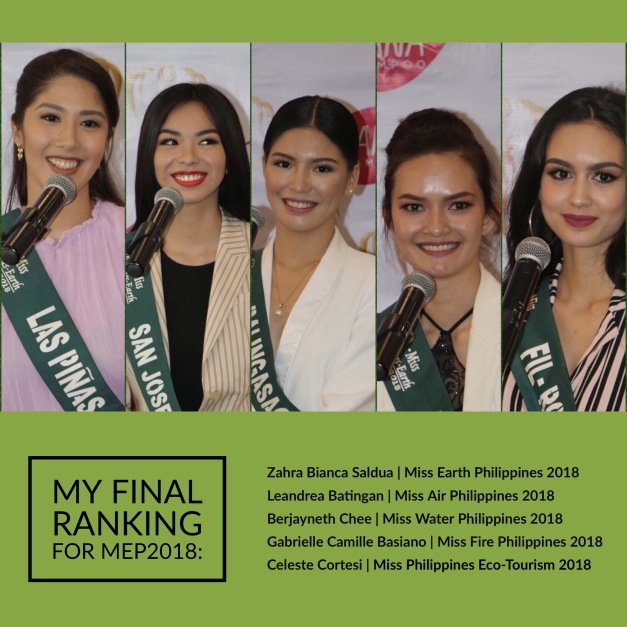 Above is my final ranking of the Top 5 – one each from NCR, Luzon, Visayas, Mindanao and the Filipino Communities abroad (a mere coincidence if you will). The 6th-ranked on my score sheet – Jean Nicole de Jesus – could still spoil things up if lady luck favors when it matters most. But if I were to put them in assigned titles right this minute, Zahra Bianca Saldua is my choice for Miss Earth Philippines 2018. Yes, the pressure to win another back-to-back Miss Earth crown for the country is there. But I am not counting on it happening again so soon because it is very likely to smear the pageant’s image even more after the marked backlash of the host delegate prevailing over everyone else last year. In that regard, I want to see the perfect representative who can actually be a solid big sister to all the candidates, as well as espousing the qualities of an excellent spokesperson for the brand itself. She will definitely be a useful asset for Carousel Productions if ever.

I have pulled in Leandrea Batingan, Berjayneth Chee, Gabrielle Camille Basiano and Celeste Cortesi to be capable of delivering reliable support as members of the Elemental Court. If one of them falters in the nick of time, the entry of San Rafael, Bulacan (Jean de Jesus) could easily replace.

Do watch the finals live at the SM Mall of Asia Arena on Saturday, May 19, with TV telecast on ABS-CBN at 10:00am of Sunday, May 20, right before ASAP. 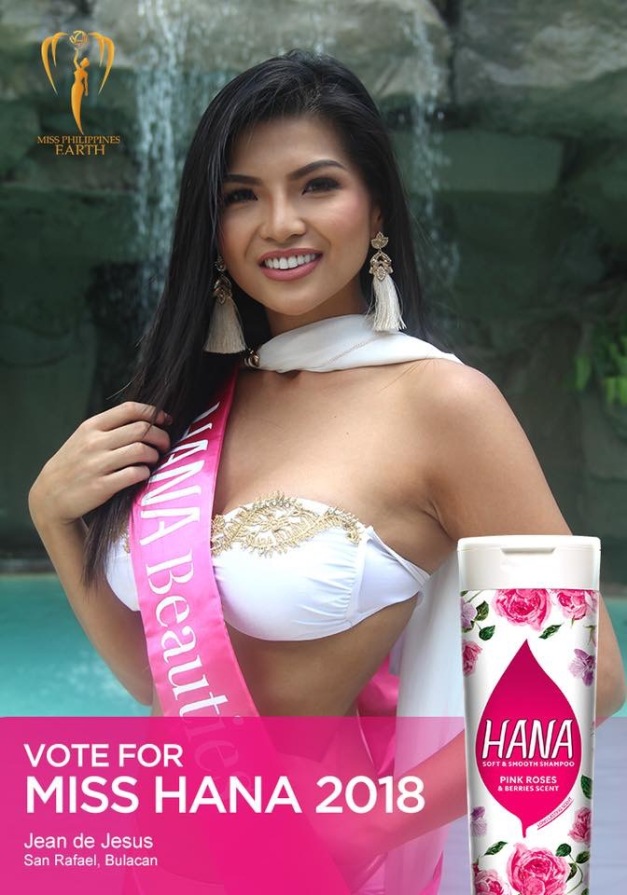 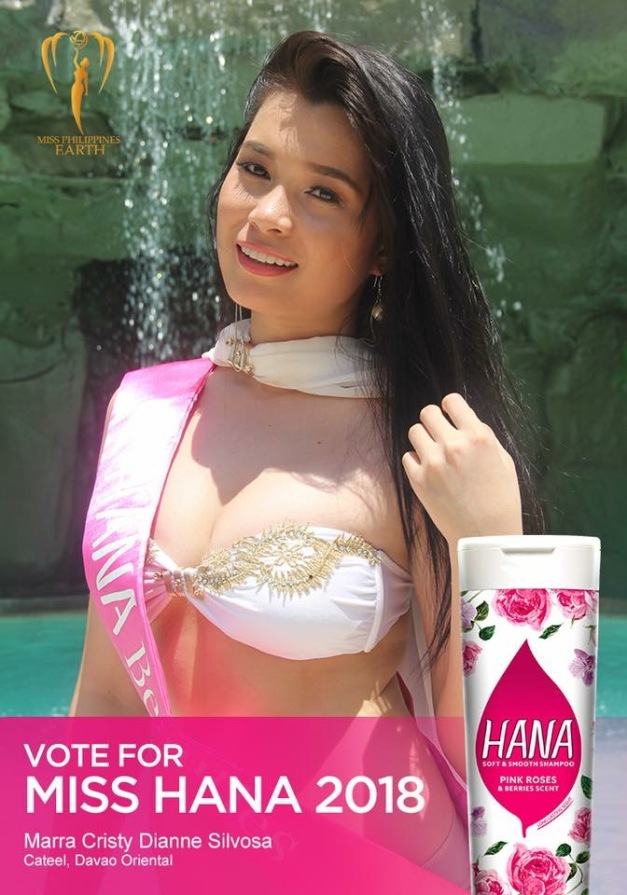 You can help one (or all five) of these #EarthWarriors become the next Miss HANA of Miss Earth Philippines 2018 by liking and sharing their photos as shared above with the clickable links to bring you straight to the voting page. Your votes correspond to 30% of the total score for the Special Award.

Throw in your support for:
Berjayneth Chee of Balingasag, Misamis Oriental

I have had the chance to know a good chunk of the 43 Miss Earth Philippines 2018 Official Candidates the past week and a half. I must say that I am impressed with a lot of them. This national pageant has really found a good niche, and it shows in the quality of advocacy and communication skills in majority of the participants. So in alphabetical order now, I am sharing with you my Top 16 running favorites among them:

The #EarthWarriors have a lot more deciding pre-pageant activities in the coming weeks so the list could still change. And once the finals night on May 19 approaches in the homestretch, I will be more confident in ranking them. 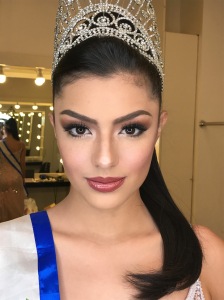 The “Barbie Doll” of the Queen City of the South is all set to conquer the World. Miss World Philippines, that is. I learned from a reliable source that Cynthia Magpatoc Thomalla is all set to try her luck in this competition and will sign up on or before the July 22 deadline.

Cynthia, who just completed her reign as Reyna ng Aliwan 2016 after crowning her successor – fellow Cebuana Marla Alforque – is training hard for the new challenge. She is ready to step up during the scheduled screening before month’s end. And I was further told that the originally-blogged Steffi Rose Aberasturi is more keen on suiting up for Bb. Pilipinas 2018.

Cynthia is not all sugary sweet and pretty on the outside. She is also a focused lady who takes this latest objective with much seriousness. She is motivated even more after learning that the eventual magic circle winners will represent the Philippines internationally.

Watch out for her! 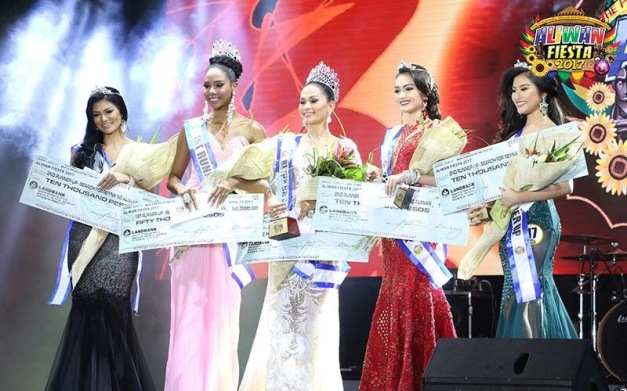 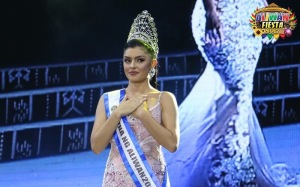 Just as I predicted, four of my Top 5 picks for Reyna ng Aliwan 2017 made it to the magic circle with Marla Alforque from Sinulog Festival of Cebu getting the crown and the top prize of PhP100,000.00. Apriel Smith from Utanon Festival of Dalaguete, Cebu was named 1st Runner-Up in a perceived close fight for the title after she claimed the important awards of Best in Swimsuit and Best in Evening Gown. Three (3) ladies shared 2nd Runner-Up honors – Maria Ahtisa Manalo from Niyogyugan Festival of Quezon, Venisse Charm Costibolo from Sangyaw Festival of Tacloban and Arielle Jazmine Roque from Tuna Festival of General Santos City. 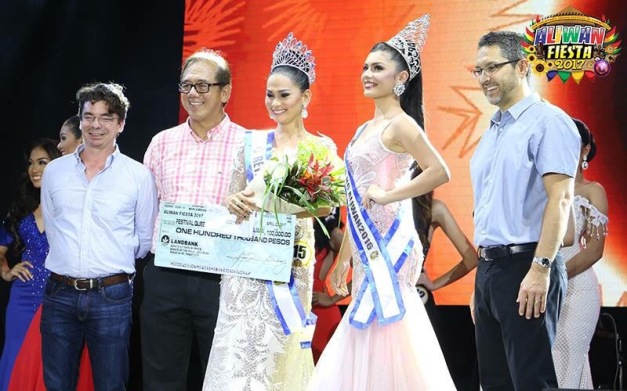 From Cebuana to another Cebuana in Reyna ng Aliwan 2017

Marla being crowned by Cynthia

Reyna ng Aliwan has always been a stronghold pageant for the Queen City of the South, having claimed a lion’s share of victories more than any city or province around the Philippines. And this year is no exception as the province landed a 1-2 punch for the highest placements.

P.S. While I am happy that Marla Alforque won, I just can’t help but feel a bit disappointed for Apriel Smith who really performed well in all areas of competition but still placed 1st Runner-Up in the end. I would be happy seeing the organizers finally bucking the trend of crowning fair-skinned beauties and pushing for more diversity with its winners in the future. Just my two-cents worth. 😉