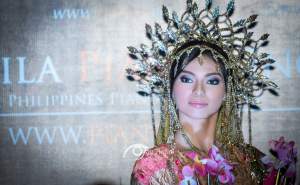 Who does she remind you of here? (Photo credit: Joy Arguil)

During last night’s Talent Competition of Miss World Philippines 2015, Emma Mary Tiglao was a sight to behold. Aside from performing an ethnic dance number that held the attention of everyone in attendance, she mesmerized the audience with her effortless beauty that reminded some of actress Angel Locsin. She was graceful in her movements that you can’t help but be continuously be drawn in. No wonder, she is indeed one of the top contenders for the crown this year. And if she can rally herself consistently the next week and a half, she could potentially be the first KF trained entry to finally win the coveted title on October 18.

What say you, dear readers? 🙂

When the Miss World Philippines 2015 Talent Competition got underway at Manila Pianos last night, it wasn’t difficult to spot the potential contenders for the special award. And boy, do these ladies know the real importance of having special skills when it comes to Miss World.

Essentially, Avonlea Paraiso was the unique standout with her harp-playing ingenuity. She was cool and collected while performing on the said musical instrument. Emma Tiglao was also worth singling out for her authentic ethnic dance presentation, just as Mia Allyson Howell took to the stage with a mean Pasa Doble. Meanwhile, Kiara Gregorio exhibited her mastery of using shiny shimmering materials transformed into a kaleidoscope of color and glitter in her rhythmic turn. But then again, the judges could also give a nod to the magic tricks of Vianca Louise Marcelo.

Avonlea Paraiso on the harp. She could win Talent (Photo credit: Joy Arguil)

Let’s see who will actually get the special award come October 18 during the finals of Miss World Philippines 2015 at Solaire. 🙂