Crowned at Midnight: The Real-Life Fairy Tale of a Modern-Day Cinderella 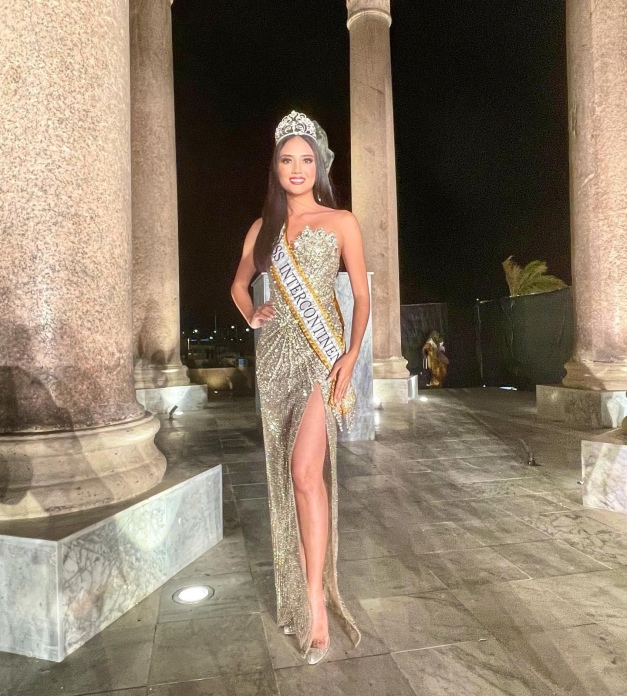 Hers is a story that can only be aptly described as “magical”.

With practically all the elements of the well-loved fiction – save the presence of the wicked stepmother and stepsisters – she was crowned at almost half past midnight (Egypt time) and had her Prince Charming in the audience incessantly cheering her on.

By no means is this parallel to that “life is stranger than fiction” line. Instead, the beautiful inspirations are all there;

1. Her name says it all – “Cinderella”.
2. Truth be told, she almost did not win the national crown if not for the wildcard opportunity that allowed her to shine on her own merits. The glass shoes really fit.
3. She has not one but two Fairy Godmothers. The first one is Madame Stella Marquez de Araneta of BPCI. And the second one is Atty Jeffrey Saclot (her direct boss at the Misamis Oriental Provincial Tourism Office) who made sure that her journey to Egypt was smooth and problem-free.
4. She has a team of friends who stayed with her all the way through. Call them a glam team or the footmen and coachman. But they supported all her needs from start to finish – Michael Villamor, Odelon Simpao and Maja Blanka.
5. She has her real-life Prince Charming – Henri Lopez – who stood by her, rallied everyone and claimed the crown as early as the day she won BbPilipinas.

This is such a wonderfully victorious journey for Cinderella Faye Obeñita whose success in pageantry is written in the stars. It does not happen to everyone. But then again, she has Lady Luck by her side and worked hard to achieve the win. 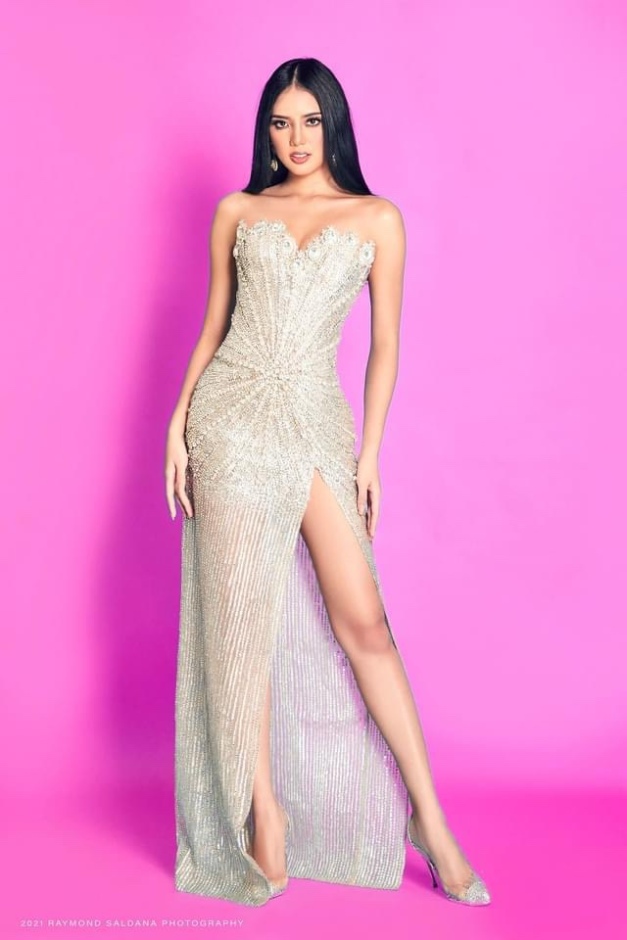 In this entry are photos of the Bb. Pilipinas 2020 Official Candidates with Madame Stella Marquez de Araneta in their first public activity when they all trooped to the Araneta Coliseum today for a tribute to the late NBA Legend Kobe Bryant. 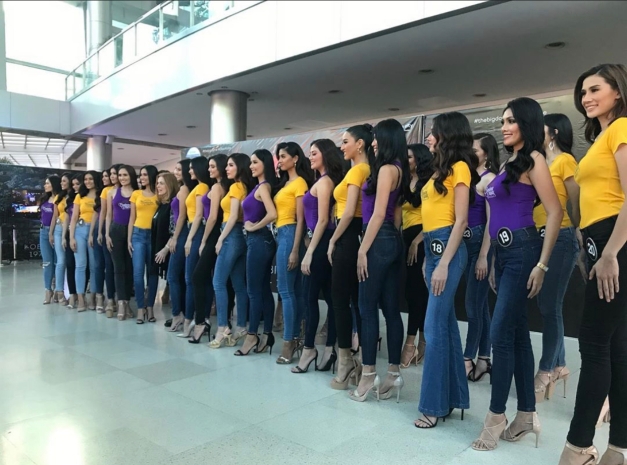 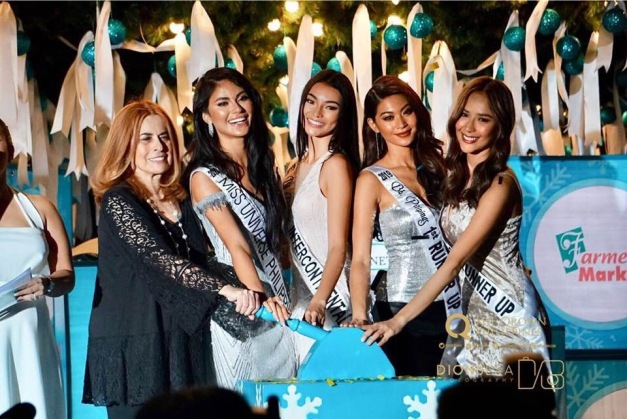 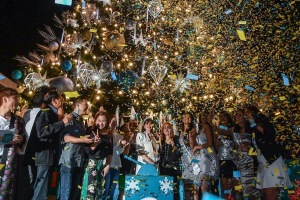 The Holiday Spirit is definitely in the air! 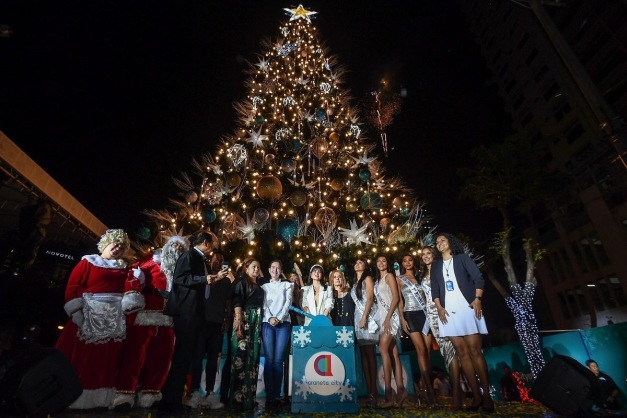 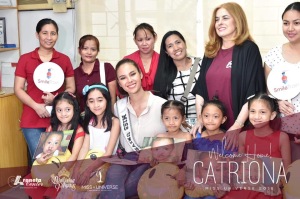 Here are official photos of Miss Universe Catriona Gray – along with BPCI Chair Madame Stella Marquez de Araneta – during their visit to Smile Train Philippines. The kids really enjoyed their time with our Queen.

Visit their FB page to know more about the organization and how you can help their cause. 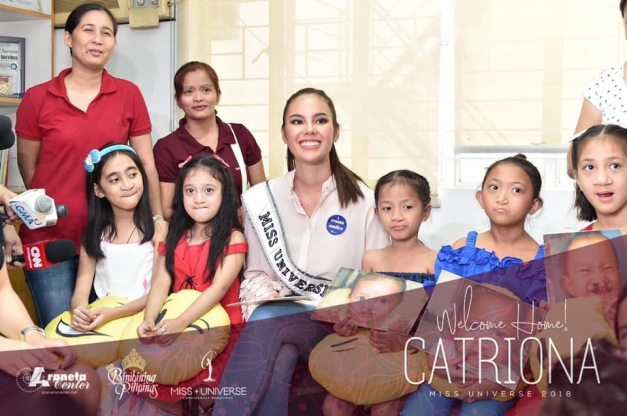 Queen Cat also visited the office of Love Yourself Philippines. This is another advocacy close to her heart – a community of volunteers that aim to reach out to others to propagate ideas, attitudes, and practices that encourage loving oneself – to DARE to be oneself, to CARE for oneself, and to SHARE oneself. It encourages HIV testing, treatment and life coaching. 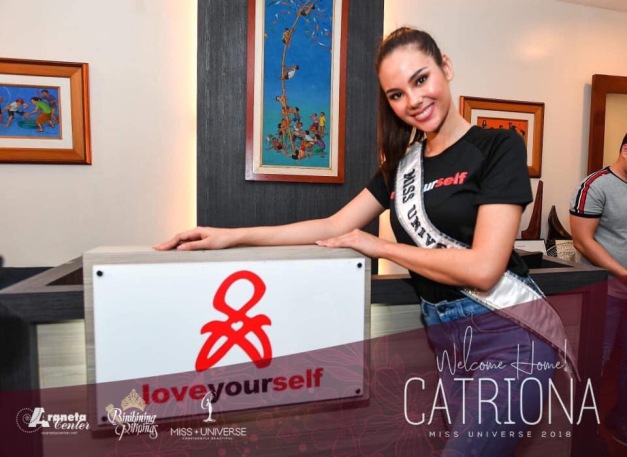 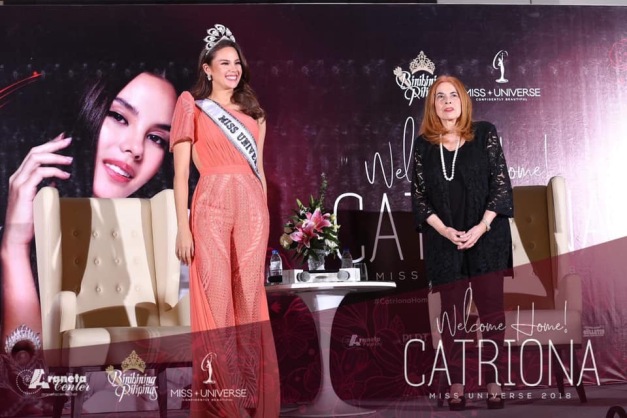 Official photos from the Press Conference hosted by BPCI for Miss Universe 2018 Catriona Gray at the Novotel Manila Araneta Center where she took the opportunity to thank everyone who helped in her journey to the crown, especially Madame Stella Marquez de Araneta.

Everyone is excited about the first of her two big parades that will happen in Pasay/Manila/Makati tomorrow. 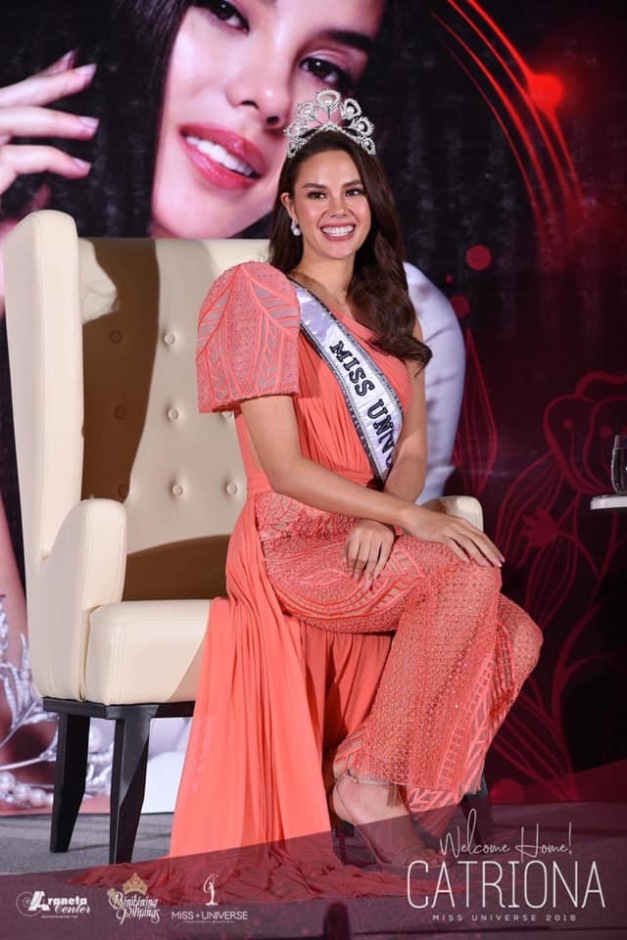 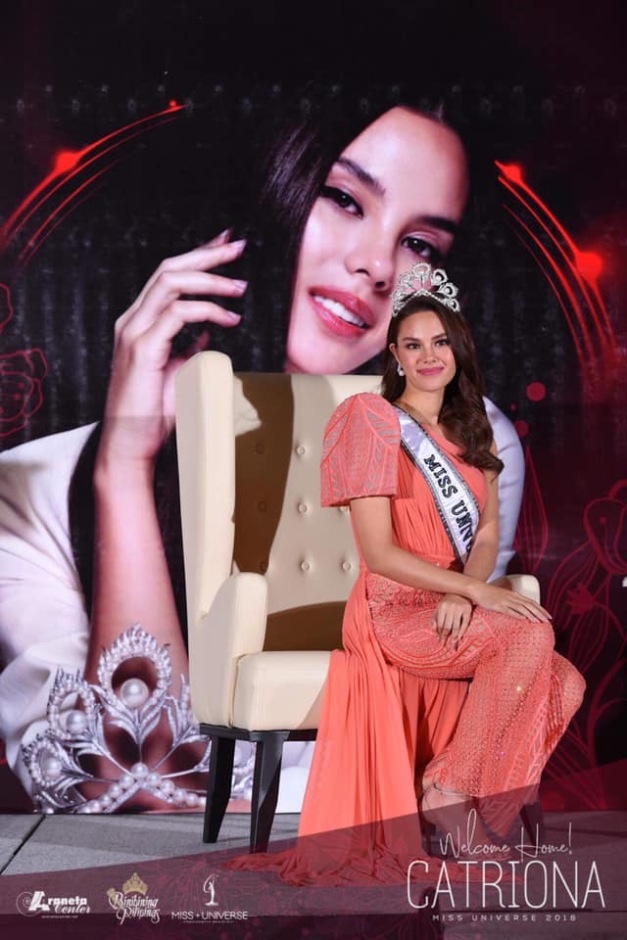 Sunday “Breakout” Specials: And the Governor has spoken

I am reposting the article published by Rappler.com about the Miss Universe franchise in the Philippines.

Some messages from contacts in my inbox are asking if this is a case of “She said, He said” after Madame Stella Marquez de Araneta was quoted as saying (during the Karen Gallman sendoff) that the franchise is still with BPCI. Now, Governor Chavit Singson is claiming that the franchise is with him (check the Screenshot below of his interview with Philippine Star).

Well, until the official announcement from MUO gets published, I will not give my personal opinion. Yet. 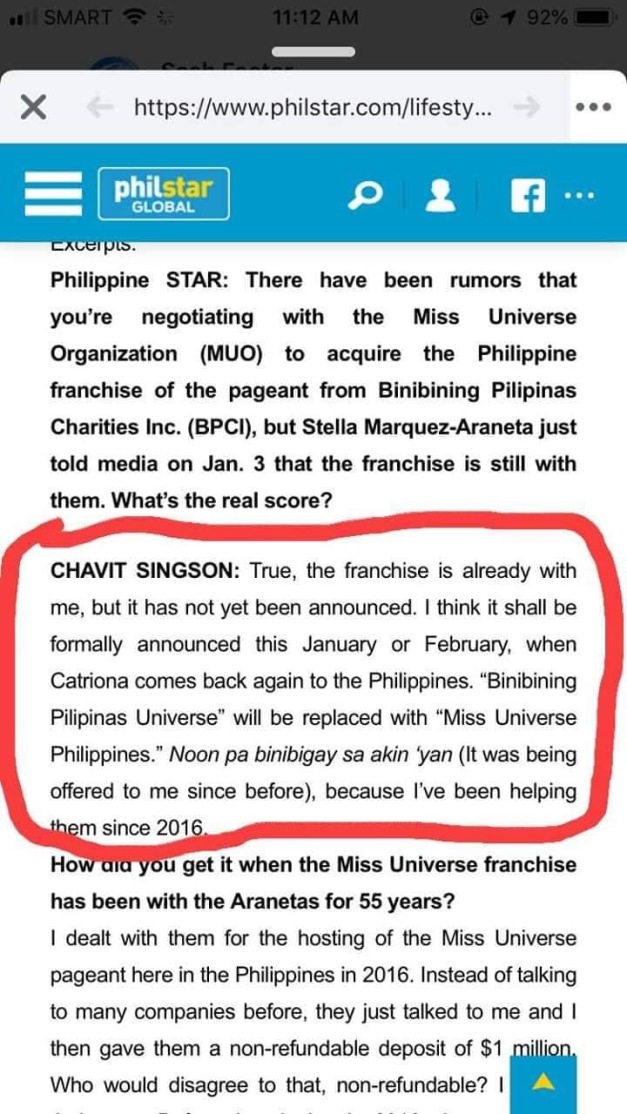 Here now is the Rappler article:

In an interview with the Philippine Star published Sunday, January 13, Singson told columnist Wilson Flores that the Philippine Miss Universe franchise is “already with [him].”

“True, the franchise is already with me, but it has not yet been announced. I think it shall be formally announced this January or February, when Catriona comes back again to the Philippines,” Singson said.

“Binibining Pilipinas Universe will be replaced with ‘Miss Universe Philippines.’ Noon pa binibigay sa akin ‘yan (It was being offered to me since before), because I’ve been helping them since 2016.” 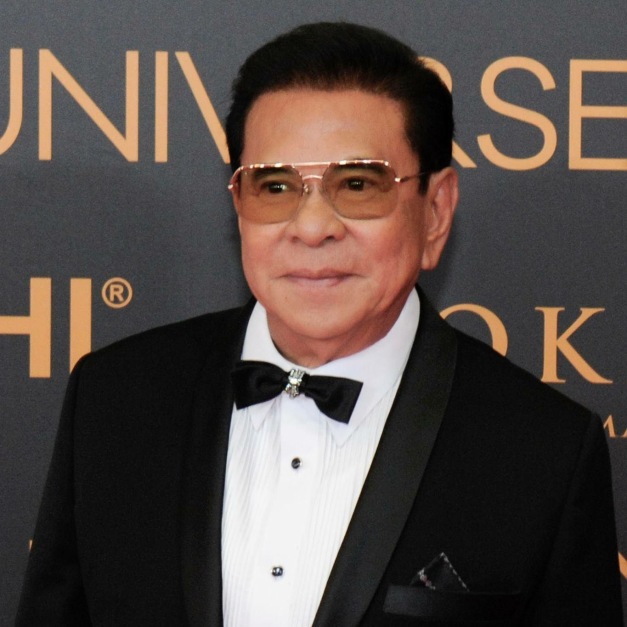 The Karen J. Gallman sendoff for the 47th Miss Intercontinental 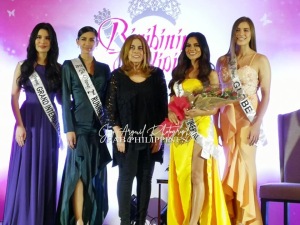 Among the six Queens, Karen has the most convenient arrangement because her international pageant is happening right here in the country. The bigger pressure, however, is becoming the first Filipina to win the Miss Intercontinental crown – with the tricky homecourt advantage at that.

Take a look and watch

I wanted so much to end 2018 with a big bang. If only clarity on the issue of whether the Miss Universe franchise remains with BPCI or crosses over to LCS has been settled in the last few days, then it would make for an explosive year-end blog entry. But then again, that would be asking for way too much confirmation during the uber busy Holiday Season.

Pageants fans and followers are divided on the matter. But I reckon that – if we play by percentages – there would be a lot more who are in favor of the franchise staying put with Bb. Pilipinas to maintain the prestige of the country’s biggest national pageant as well as to preserve its glorious place on top of the pedestal in full hierarchial view of the entire Philippines. Besides, the record of the leadership of Madame Stella Marquez de Araneta is something that other National Directors can only hope to achieve in their lifetime.

On the other side of the coin, there is this side of business that doesn’t give much premium on sentimentality or loyalty or time-honored tradition. As the line goes, “…the only thing constant is change.” And with the ties that bind the Miss Universe Organization (MUO) and the LCS Group of Companies, the partnership could only move to a logical next step of having the franchise be placed under the latter’s care. That way, both MUO and IMG will have a more direct hand in controlling/advising how the brand is managed and sustained with progressive exclusivity.

This is me in the middle. Having grown up with Bb. Pilipinas, I would love to see MU stay with BPCI. But I’d also like to see how MU will grow nationally as a stand-alone pageant. I won’t take sides now. I will just let destiny speak for itself. Because with what I have been hearing, it could be a done deal – unless some kind of a unique arrangement can be finalized in the coming month or two.

Since the issue has not been settled yet, let me end 2018 with lyrics from the song written/composed by Prince and made more famous by Sinéad O’Connor because I personally feel that some of the lines simply fit:

No to LCS: Miss Universe Philippines to retain in BPCI

BPCI: The true gateway for Filipinas to make a difference in the world.

This is one thing that many pageant fans do not realize. BINIBINING PILIPINAS CHARITIES is a reputable organization and one way for BPCI to perform their community advocacy is through donations/honorariums received from private corporations/governments when the beauty queens are invited to do their jobs such as Public Speaking about an advocacy, judge a pageant, endorse …a product, etc. If BPCI will lose the top plum, it will mean the demise of MANY communities that they support both in Metro Manila and the provinces. BPCI has been supporting the ccommunities since the 1960s and it’s hard to think that the support will be divided. BPCI donates ALL OF ITS EARNINGS (Honorarium and payment of these private organizations/governments) to orphanages, daycare centers, calamaty centers (when it happens), hospitals such as PGH and AFP hospital and bringing of indigent children by hosting Disney on Ice.

I’m sure LCS will promote an advocacy of its own too. But let us not forget that the TRUE RELEVANCE of Binibining Pilipinas lies in more than just the quest for the True Filipina Beauty and not on thinking about who can be sent to Miss Universe/International from its roster of crowned queens.

BINIBINING PILIPINAS IS AN ADVOCACY IN ITSELF. Losing a crown may impede donations given to this advocacy but BPCI has been a legacy since the 1960s. Our support should be given not only to the glitz, fame and representatives but to the mother organization who also fights to helo these young Filipinas to be a torch-bearer of community advocacies that they and BPCI jointly supports.

As what BPCI have said in their official website, “Binibining Pilipinas is the TRUE GATEWAY to many meaningful opportunities to be able to make a difference in the world, with its enduring commitment to various humanitarian causes.”

Sign the petition HERE if you are willing (or not) to show your support.