In the Spotlight: Your Binibini 13 Kristie Rose Cequeña 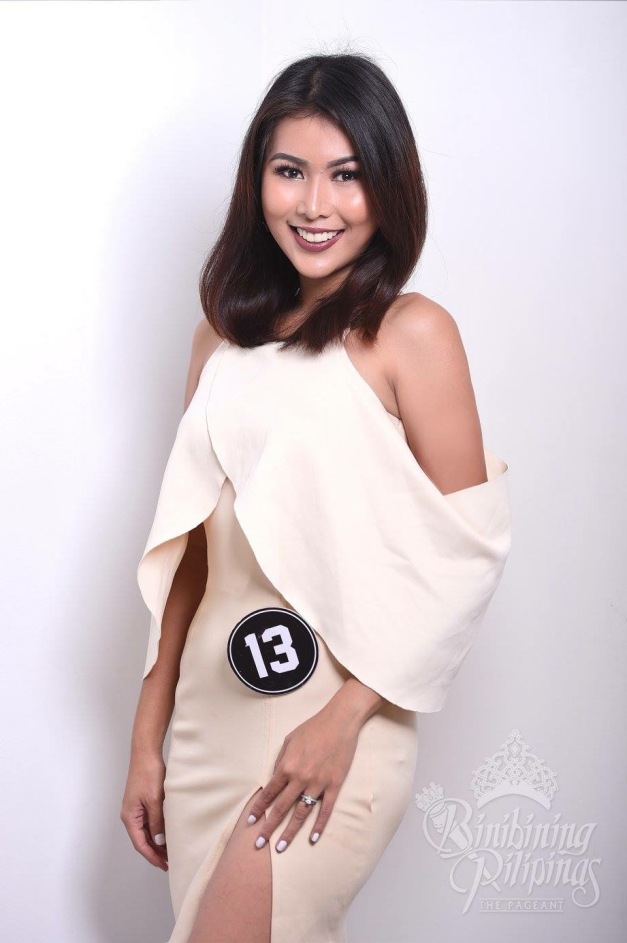 Thirteen is not necessarily an unlucky number, especially to the Independent Kristie Rose Cequeña who is your Binibini 13 for Bb. Pilipinas 2018. Last year, she was Binibini 33. Let’s see what fate awaits this lady whose last-minute decision to re-join was reached upon just a day before the deadline, and while she was relaxingly biking around on a Sunday morning.

“If fate and luck give me the opportunity to become one of the Bb. Pilipinas 2018 titleholders, then so be it. I really worked hard for this and ready to take the responsibility to represent the Philippines in any of the international competitions up for grabs but more importantly, to continue doing BPCI’s Charitable endevours and socio-civic undertakings. Being a Binibini is a once in a lifetime opportunity and will always have a significant impact in my life.

This time around, my edge will be the experiences and valuable lessons I have learned when I first joined Binibini last year. That opportunity expanded my horizon, full of realization that made me the best version of my true self right now. I do hope that these will be my greatest assets in this pageant journey.” 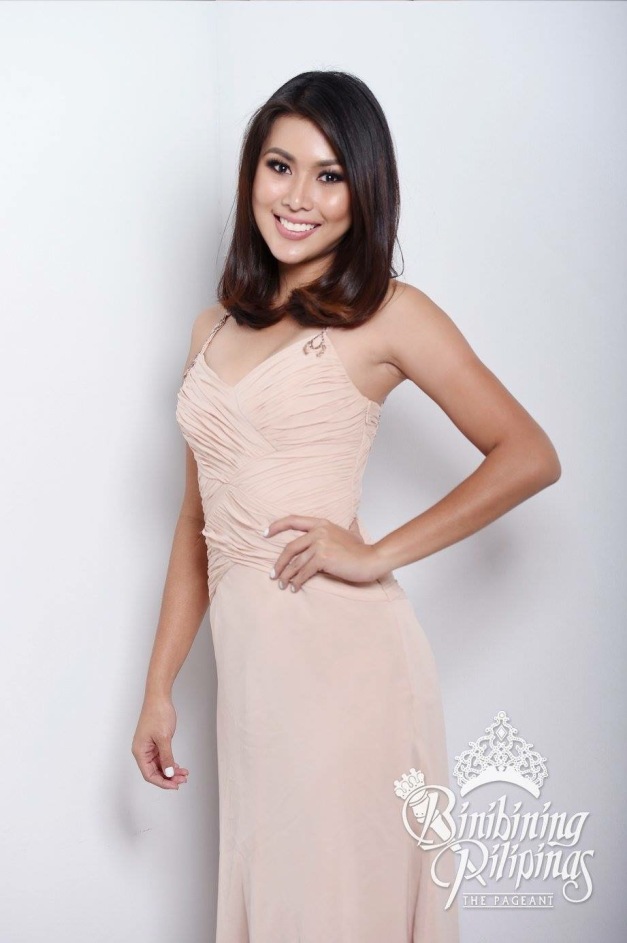 Yesterday was the deadline for submission of Bb. Pilipinas 2018 applications. And beyond the euphoria of pageant fans who made the appearance of Catriona Gray trend on Twitter and other social media fronts, here are photos of some of the buzzer-beating applicants who made it to the BPCI office at the Araneta Coliseum. 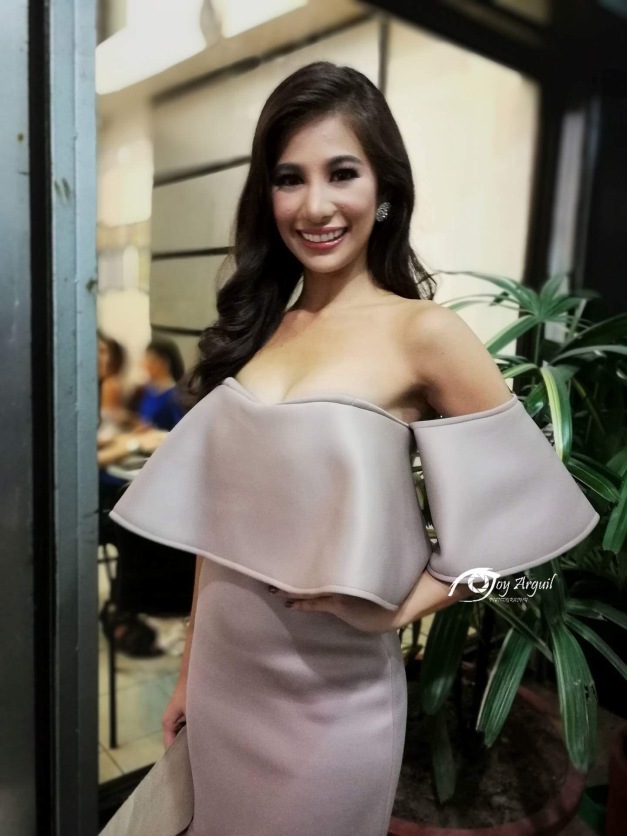 This week, all applicants will undergo interviews with the legal team of BPCI in order to double check on their documents, qualifications and other essential contractual endorsements (or the absence of) that should hopefully filter the group of more than a hundred to just the ones who will undergo the one-day (all-day) final screening on Monday, January 15.

Best of luck to all the aspirants!

Thanks to my partner Joy Arguil for staying all throughout the important last day of submission for Bb. Pilipinas 2018!

Exclusive! A Day with the Binibinis at David’s Salon Academy

Team normannorman.com was all accounted for!

The whole of Monday was literally spent by team normannorman.com at the David’s Salon Academy in Makati City where Joy Arguil, Joseph Gerard Jose and I bonded and took photos with the Binibinis of Bb. Pilipinas 2017 upon the exclusive invitation of Marketing Manager Lotte Villarosa-Agraviador. The event started with a short lecture on the role of the salon company in the nationals, followed by delightful games that were gleefully participated in by the ladies and the stylists. Right about lunchtime, everyone was treated to a simple but yummy buffet before the pampering sessions started. Everyone was treated to relaxing back massages, mani/pedi and foot spas that were accompanied by cool loot bags that contained products that will help them maintain healthy hair and nails.

Hair and Make-Up consultations were also made with the assigned stylists for each Binibini and were given experimental approaches as to what facial applications best suit them. And to cap everything off, David’s Salon owner David Charlton dropped by to have group photos with the ladies and even brought them easter egg chocolates which came all the way from London.

The Binibinis had HMU consultations with their assigned stylists

The Binibinis were also given pampering back massages, foot spas and mani/pedi

It was fun all throughout, especially for your blogger who really took the opportunity to spend quality time talking to almost everyone. I can now safely say that this is a 99% cool batch of ladies who have the right attitude and personalities to compete for the crowns at stake. Why did I say 99%? Well, you do the math. No batch is uber perfect since there will always be an odd one out in terms of chemistry with everyone. I won’t name a name anymore since she is just one different apple in terms of character and disposition. Who knows, she might still improve her ways and turn out good in less than two weeks’ time.

Allow me also to point out the quality bonding I spent with random Binibinis. I say random because I caught them by their lonesome at given moments and the initial pleasantries turned into more meaningful chats in the process. Big shoutout to #Binibini2 Arienne Calingo, #Binibini19 Rachel Peters, #Binibini20 Christa Borja, #Binibini21 Jamaica Ambal, #Binibini23 Arah Salientes, #Binibini31 Katarina Rodriguez, #Binibini32 Charmaine Elima, #Binibini33 Istie Cequeña, #Binibini37 Sammie Anne Legaspi and #Binibini39 Elizabeth Clenci. I loved practically all of them, though!

Till our next event, Binibinis! 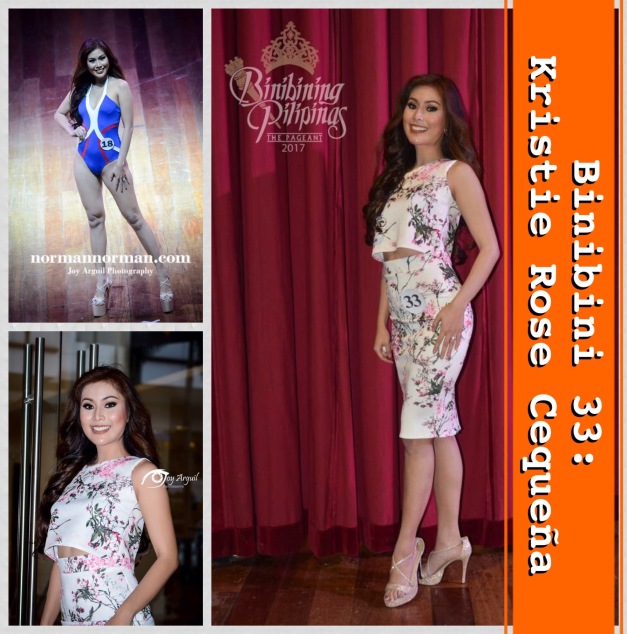 I have known Kristie Rose “Istie” Cequeña ever since her Miss Republic of the Philippines 2015 days where she finished in the magic circle and was named Miss Mindanao. She has this go-getter attitude. If she knows that she can suit up to a challenge, sky is the limit to what she can achieve. And so, I was no longer surprised when she screened for and got one of the forty (40) Official Candidates’ spots in the process. She is now your Binibini 33 in Bb. Pilipinas 2017.

How much do you really know about this 24 year-old from Sta. Rosa City, Laguna? Read on:

“During my formative years, I was boyish. I ventured into sports early on which led my way to NCAA and WNCAA stints as a volleyball player for San Beda-Alabang. But I have also always imagined of myself becoming a beauty queen. I have joined pageants which honed me, developed my confidence and patience. In both fields, every setback made me challenge myself even more. I am always competing with the most recent version of me.

I am the eldest in a brood of two and a friendly/jolly person to say the least. I feel like I am in Cloud 9 when my name was called as one of the Binibinis. I felt God helping me work out to attain my dreams. I am really at a loss for words. I can’t contain my happiness since I’ve waited so long for this.”

Who knows what fate lies ahead for Istie in Bb. Pilipinas 2017? I can only cheer her on and support in the journey. I know that she will give her absolute best every step of the way.

Let us now hear your inputs about Binibini 33, dear readers. 🙂

PS. Istie is an independent going into the competition.

The Miss Republic of the Philippines 2015 Winners

Fermira Dianne Ramos of Zambales and Beatrice Valente of Milan, Italy copped the two highest titles during the lavish finals last night at The Theater at Solaire. They are now Miss Republic of the Philippines 2015 and Miss Republic of the Philippines International 2015, respectively, and are the proud first-wearers of the gold crowns that are considered to be the most expensive in any national beauty pageant in the country ever. They have also been awarded scholarship grants of their own choice which they can take during or after their reigns as such.

It was a pageant that prides itself in having some of the most articulate candidates, with a roster of Top 15 Semifinalists who nailed their individual Q&A portions with such impressive answers that made it doubly hard for the judges to trim down the group to just the Top 5.

The five ladies in the magic circle will now be busy promoting Philippine Tourism as the two top titleholders will be traveling to different Filipino Communities abroad to promote visits to key local destinations. The Runners-Up will alternatively accompany them in the scheduled travels. 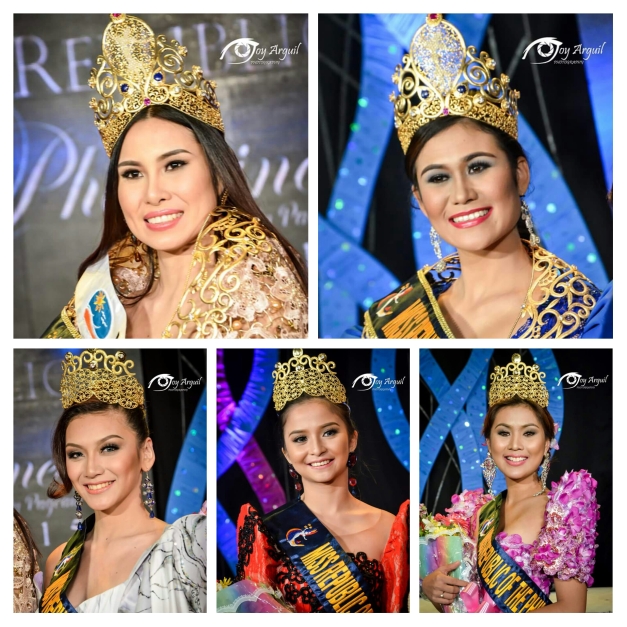 The winning ladies with their gold crowns as Miss Republic of the Philippines 2015 victors (Photo credit: Joy Arguil)

Congratulations to all ladies, and also to CEO Lynette Padolina, Mila Imson of Kitsilver Jewelries and the Vatican Fashion Museum (which is responsible for the beautiful Philippine Ternos worn by all the candidates) for a successful staging of the big event. 🙂

Who will be crowned winners of Miss Republic of the Philippines 2015?

I took the liberty of naming my Top 15 instead of just a dozen from among the 35 Official Candidates of Miss Republic of the Philippines 2015 (Photo credit: Lito Caleon)

The plan was for a Top 12 to be named to the Semifinals. But after reviewing the contenders and knowing them personally, I need to make it a Top 15 to recognize the efforts of all potential qualifiers who can fill up the four (4) pillars of importance: beauty, personality, attitude and communication skills.

From these fifteen ladies, I thought of going straight to my Top 5. Why? Because there are two major titles and one of them will come from the foreign entries. And since there are only four (4) in my Top 15 for that 2nd crown, why not just zero in on the person who might be the best fit for the spot. At any rate, I added an extra girl just to sweeten up the mix a little bit and be a potential spoiler.

My Top 6 for Miss Republic of the Philippines 2015. One of them is a spoiler who could take the place of one of those likely to make up the magic circle.

Obviously, Natalie Mcdiarmid of Melbourne is my pick for Miss Republic of the Philippines International 2015. But from among the rest, it could still be anyone’s ballgame. Joselle Mariano, Cristelle Tolentino and Kristie Rose Cequeña are still in it to win it. And one of them could take the other throne.

Just my two cents worth for the pageant. I am happy with how I get an extra uptick in site traffic because of Miss Republic of the Philippines 2015, and that’s why I exerted some due effort to cover the same. 😉