JDV Girls: Silently competing and going for the kill when it matters most

As John dela Vega puts it, “JDV GIRLS SILENTLY COMPETING FOR THE CROWN”.

I love the way John dela Vega expresses support for his girls. In one of his Facebook updates, he made a photo collage of the nine Binibinis from Team JDV and stated that they are “silently competing for the crown“. And if I may add to that, one or two of them might just go for the kill when it matters most.

Joy Diaz, Shauna Curran, Sarah Asido, Kenneth Santiago, Racquel Kabigting, Jeslyn Santos, Leona dela Cruz, Krystal Alonday and Vessica Sambo may not be the most hyped or most heralded, but they still know how to make their presence felt. Maybe not to the degree most of us pageant watchers expect, but still enough to make heads turn for some of them. Aside from having the two tallest candidates (Racquel and Kenneth), the camp also has the lady with the most soulful eyes (Vessica Sambo) and the one who possesses the most intriguing mix (Scottish-Igorota Shauna Curran).

I’m pretty sure there is at least one (or two) among them who will surprise on March 30. Who could it be? 😉

Binibini 9 Joy Diaz with her candid profile shot during the Jag photoshoot.

I was actually amazed at the picture above showing the profile shot of Binibini 9 Joy Antonette Diaz taken at random by BPCI’s resident snappers. She looks heavenly/ethereal, don’t you think? Compare that her regular shot on the left and you’d think they are two different ladies.

I really wish Joy is at least two inches taller. That way, it wouldn’t be so hard for me to pick my favorites from the Team JDV camp. The height of Racquel Kabigting is constantly hovering her chances. But then again, their mentor John dela Vega can always push for Gloria’s niece to wear the Philippine sash in Miss Grand International 2014 if ever. That would be a sweet denouement depending on how the results of Bb. Pilipinas 2014 will unfold. 😉

Here now are three of the girls of Bb. Pilipinas 2014 who, in the opinion of some, are neither here nor there at the moment. They are the ones who are considered in good contention but not placed by the rest as title-worthy enough to spring a surprise on finals night. In short, they are regarded as potential semifinalists – no more, no less.

First stop, Mary Ainjely Manalo. The Pasay City bet with classic good looks is being promoted by her supporters as a cinch for the Bb. Pilipinas International crown, owing to the belief that she is the complete package likely to come through in the eyes of the Japanese organizers in Tokyo. But is she really ready to take on the mounting pressure of going for a back-to-back win? Iron-clad will and determination are musts for whoever will be sent to the Land of the Rising Sun. If she can prove in the coming weeks that there is more to her beautiful face and hourglass figure than what most followers are seeing so far, then maybe – just maybe – she can join the wildcard queue for the same.

So what’s your take on Ainjely?

Next on the list is Joy Antonette Diaz. Beyond the popular aunt and surname constantly attached to this Fil-Am wonder wherever she goes, are there more convincing reasons to bet on her for one of the titles? I have said at least twice in the past that she exudes a more disarming presence in person, aside from looking 5x lovelier in the midst of a face-to-face encounter. Nevertheless, she could be particularly brandished by comments like “she looks shorter than the rest” or “she’s just okay in my assessment“. And we all know that “good” and “okay” won’t cut it in this group where the degree of competition has risen so high following 2013’s glorious record.

In my opinion, Joy is simply underlying. Overwhelmed she definitely is not because of the built-in confidence to keep her gameface on despite the onslaught of far more serious fellow aspirants. 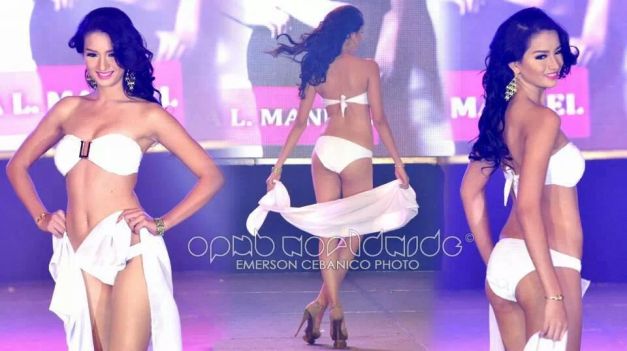 And then there’s Hannah Sheena Manuel from Isabela. This 5’9″ ingénue (considering that this is her first big national pageant straight from anonymity beyond the confines of Santiago) is showing promise despite standing with and taking her stage turns with the pageant pros. During last Wednesday’s Press Presentation, it’s some kind of amazing how she was still able to hold up her own stand when pitted against the likes of Binibini 25 MJ Lastimosa and Binibini 27 Hannah Ruth Sison who sandwich her in line-ups and numbered stage calling.

Question is, how much further can she take the increasingly stressful days and weeks ahead? This edition is definitely not for the weak-hearted and easy-to-distract.

For now, I would apply the phrase ‘overwhelmed to a certain extent‘ to Sheena. Kudos to her for not being intimidated just yet. I am hoping that she will give the full weight of her competitiveness without the need to make long pauses while regaining her composure.

So now, dear readers, time to pitch in your views on the trio of Ainjely, Joy and Sheena. 😉

During last night’s finals of Bb. Paranaque 2014, 17 year-old Ysabella Blanche Roxas Ysmael was crowned winner. What made the victory extra special was the presence of the 5’7″ beauty’s aunt who happens to be Miss Universe 1973 Margarita Moran. It was a delight to see both of them pose for pictures after the coronation.

So do you think Ysabella has the makings of a future Bb. Pilipinas? It’s really not so hard to imagine her joining one of the future editions. If Joy Diaz, niece of Gloria Diaz, can take part even without the benefit of a current side-by-side photo with her famous aunt, then the still-waiting-for-a-year-or-two-before-going-national young lady certainly will. With the blessings and backing of Margie, for sure. 😉

Now if these five ladies make it, arrange them to your liking

Let’s continue with our (serious) playtime with a second set of five ladies based on their number assignments as Bb. Pilipinas 2014 Official Candidates. 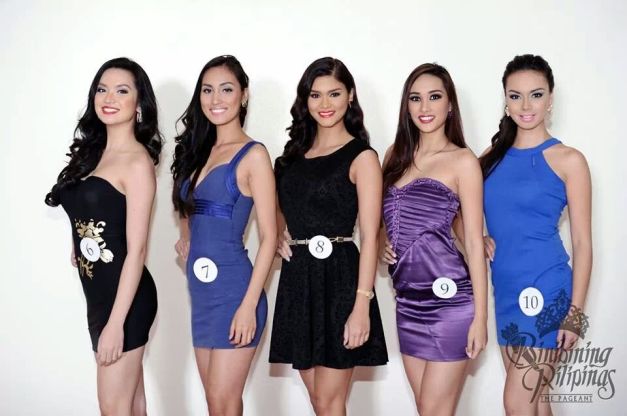 Binibinis 6-10 for your title assessment

If the quintet above is the eventual Top 5 during the March 30 finals, how will you distribute the titles? What placement will you give to:

There’s a 3rd set to follow in 24 hours. If you still haven’t found what you’re looking for, then she might come in next. 😉

Guess who got to laugh last? (Photo credit: Emerson Cebanico)

When the top photo of the two images above was posted online prior to the announcement of Bb. Pilipinas 2014 Official Candidates, the ladies pictured in the same (Team JDV’s Leonalyn dela Cruz, Joy Diaz, Kenneth Santiago, Sarah Asido and Vessica Sambo) were rained upon by endless bashings in pageant forums and message boards. Some of the comments were teetering on heartless and insensitive.

But then again, it was only a matter of time before vindication saved the five lovelies from further embarrassment. The bottom photo above showed the same quintet being photographed right after getting individual single-stem roses from BPCI signifying their change of status from SA (Screening Applicants) to OC (Official Candidates).

Moral of the story: think before you click, or at the very least, don’t be rash before you bash or better yet, never rush just to bash. 😉 It’s no secret that Pia Wurtzbach, Yvethe Santiago and Bianca Guidotti are the tentpoles of Aces & Queens for Bb. Pilipinas 2014. In fact, during the beauty camp’s presentation event earlier this month, they were always the last three to be introduced in each segment with the Bb. Pilipinas 2013 1st Runner-Up always bringing up the rear. No surprises there.

If we are to analyze things, Pia Wurtzbach is the girl most likely to win a crown even before the Official Candidates are announced. But what if we play a bit of fantasy league picks and come up with just twelve (12) Official Candidates composed of the Top 3 from A&Q and the perceived Top 3 from KF (Kris Janson, Parul Shah, MJ Lastimosa) and Team JDV (Vessica Sambo, Joy Diaz, Racquel Kabigting) plus the top contenders each from R-L (Aiza Faeldonia) and the Isabelanons (Joy Marie Gangan), and a wildcard entry in the person of Nichole Manalo who is buzzed about as being favored due to the Bianca and Kate Manalo connections.

What if there are only 12 candidates with the 9 above added to the Top 3 of A&Q? (Photo credit: OPMB Worldwide)

Will it make predictions easier for everyone? 🙂 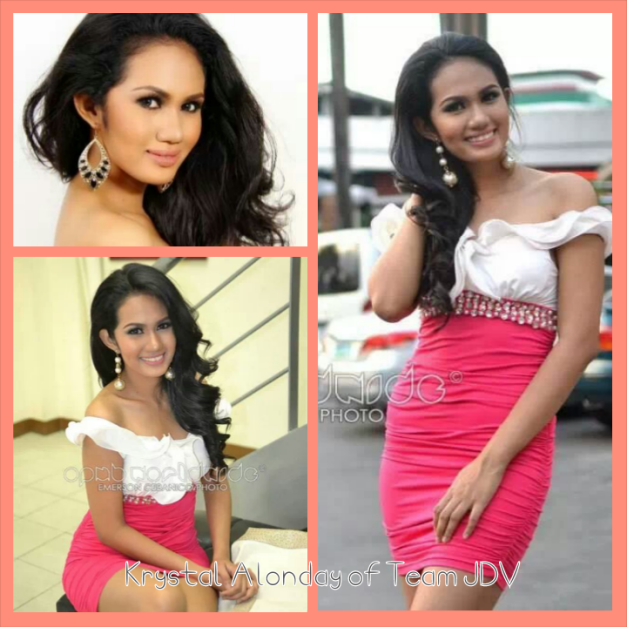 One of more than a few Team JDV entrants for Bb. Pilipinas 2014

One more girl who filed on the last day at Araneta is Krystal Alonday who belongs to Team JDV. The one-time Miss Philippines Earth candidate is a true-blue Bulakena who hails from Paombong. She is a Computer Engineering student of Bulacan State University.

Make way for John dela Vega’s small group of joiners (including her lead applicant Joy Diaz). Let’s not raise negativity, dear readers. After all, it’s no joke training and grooming ladies for Bb. Pilipinas, let alone the 2014 derby that will go down memory lane as having the toughest field ever. 😉