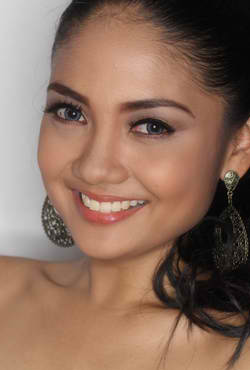 Athena Mae Imperial will go down the history of Miss Philippines Earth as its most critically-panned titleholder and also the one who claimed victory in the only edition of the contest with the toughest cuts in any previous or succeeding years. As if that’s not enough, her eventual placement in the Top 4 of Miss Earth 2011 as Miss Water added fuel to the already blazing fire of endless potshots. Here is a girl who had the right smarts for the title, but was not able to meet the physical expectations (or standards, if you will) of pageant fans and followers in terms of being fully- deserving for the achievements that she earned for herself.

But Athena managed to survive a tempestuous year. Let us now look back at some of the videos that will remind us again of her reign, with the last one showing her latest career as a Field Reporter of GMA News TV.

Below is an interview with Athena right after her crowning as MPE2011.

Below is an interview with Yahoo Philippines where she spoke about embracing her “flaws”.

What makes a good Miss Philippines-Earth? 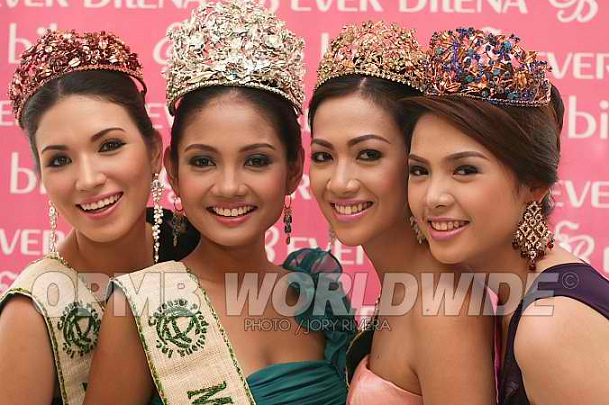 Time and again, pageant followers have always relied on the formula of choosing a beauty queen as 80% gorgeous face & shapely body, with the remaining 20% allocated to intelligence and personality (or personal style if you will). Some individuals may disagree with my play of percentages, but in the end, there’s no denying that beauty of face and figure will always get the upper hand regardless of the numbers assigned to the same.

This brings us to the Miss Philippines-Earth competition which of late has gradually commandeered a major shift in the judging of its winner. Instead of giving more emphasis on the physical attributes of a candidate, the equation has become 50/50 – with the first half going to the usual pageant parameters and the second half attributed to environmental knowledge and uncodntional commitment to the causes of Mother Earth. Not bad, if you ask me. The beauty contest system in the country could get a nice boost with the changes Carousel Productions and Miss Earth Foundation are implementing. And if you closely look at its brand-new titleholder, Athena Mae Imperial, she espouses all the qualities they are looking for. The girl is pretty, though not drop-dead gorgeous. And she has the brains to boot. Being a Communications Research graduate of University of the Philippines-Diliman and researcher of GMA News TV, she is well-read, well-informed and analytical. On top of that, she is a good speaker and consistent in her objective of furthering the environmental protection of her native Casiguran, Aurora. 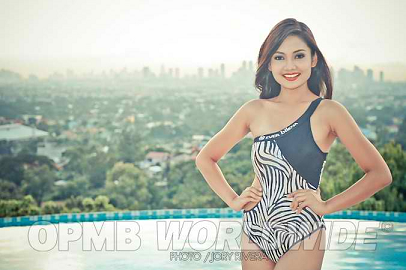 But then again, Miss Philippines-Earth does not stop in touring the whole country to lead in various ecological missions and the like. There is the equally-important international pageant to prepare for. Miss Earth 2011 will be held in Pattaya, Thailand. Tall and beautiful ladies from all over the world will fight for the crown currently on the head of India’s Nicole Faria. And it’s already a given that the candidates will outshine each other regardless of the means. Where does Athena Mae Imperial stand in all this? She’s got the smarts and the support of the organizers. But how far will this bring her in the quest to become the second Filipina to win the crown? She stands 5’5″ – not the most enviable height to have when posing side-by-side with glamazonic representatives. How can she effortlessly stand out?

I can only think of one answer. Just like the national pageant, the organizers should push for a thorough check of each candidates’ seriousness with environmental concerns that go beyond pre-arrival superficial textbook memorizations or rehearsed lines spewing the love for Mother Earth. I’m pretty sure it would be unwise to conduct intermittent eliminations along the way to filter out the undesirables and come up with only the Top 10 for the finals. This will simply be a big turn-off to the international pageant community, especially that there is no clear-cut explanation on why some girls were booted and why the rest stayed on. I reckon that several fast-track events should be held where the truly dedicated contestants will be given a fair chance to shine during coronation night. 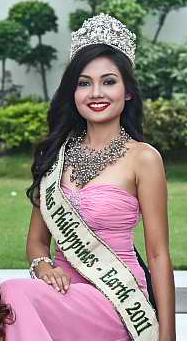 Athena Imperial dolled up with her Miss Philippines Earth crown and sash.

Since Miss Earth announces a Top 16 during finals, why not make 6 of those slots earned via fast-track events that focus on environment-inspired activities? Top of my head would be: 1) an Indigenous National Costume Competition, 2) an Eco-friendly Run, 3) an on-the-spot Environmental Challenge where all the ladies will take a written test first on how well they know their natural resources, with the Top 10 moving on to participate in an actual skills test where they can be asked to do stuff like make fire or potable water or segregate waste and the like. I’m pretty sure Miss Earth Foundation can be more creative in this aspect. And should one of the fast-track winners claim top victory in the end, then wouldn’t that be a breath of fresh air on how we visualize a beauty queen?

If done well, I believe that they can come up with a Miss Earth winner who exemplifies the true essence of a knowledgeable individual with deep love for Mother Earth. And if this will mean a major overhaul of how a beauty pageant should be conducted, then so be it. This is the only way the organizers can genuinely make Miss Earth shine above the rest, and make the competition richly-deserving of being tagged as the 3rd (or 4th) Biggest Beauty Competition in the World.

Finally, what does it really take to become a good Miss Philippines Earth? Let’s put it this way, Athena Mae Imperial may set the trend for a winner who has identical scores on being good-looking, articulate and ecology-wise. She does not fit the mold of the traditional queen to be sent to battle for Miss Earth. But let’s give her the benefit of our doubts. She may just be challenged enough to prove that she can indeed make us proud. 😉 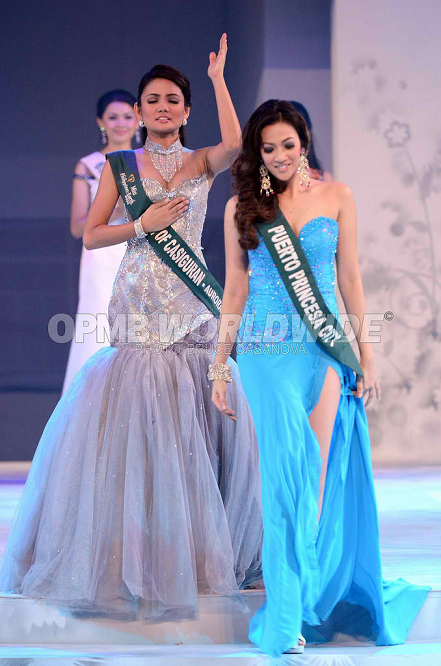 A triumphant Athena Imperial (L) gives thanks to God for the gift of victory, while a smiling - albeit dejected - Jonavi Quiray accepts her fate as 1st Runner-Up. 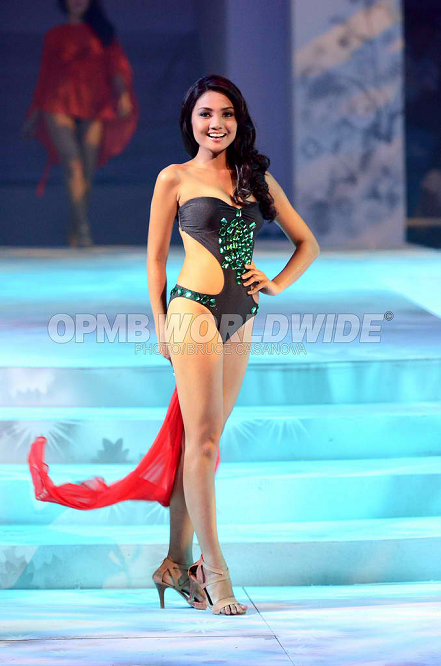 Athena may not be the tallest, but she certainly stood tall by the end of the night. She is shown here during the swimsuit round wearing Solara swimwear 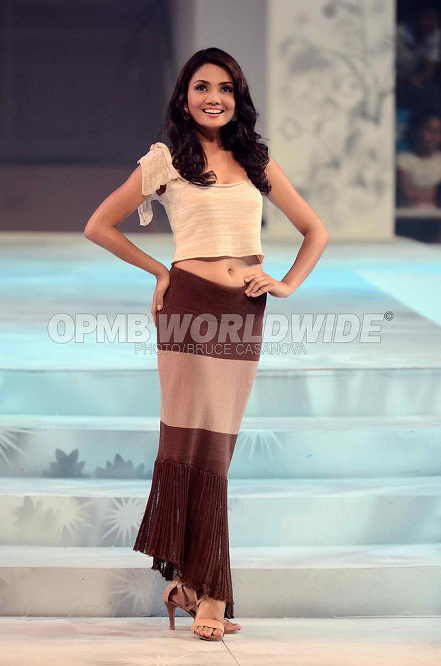 Athena's unrehearsed and heartfelt response during the environmental Q&A jacked up her scores among the judges who nodded for her win.

The Municipality of Casiguran in the Province of Aurora must still be in Cloud 9 up to now after one of their own did them mighty proud in the finals of Miss Philippines Earth 2011. Athena Imperial literally scored a come-from-behind victory, in the process nosing out heavy favorites Jonavi Quiray of Puerto Princesa City, Michelle Gavagan of Las Pinas City and Murielle Orais of Cebu City. She is well on her way to more beauty queen glory as she preps up for the Miss Earth 2011 which will be held outside the Philippines for the 2nd time in Pattaya, Thailand on December 3.

If you ask me what her chances are in the international level, I would throw back the question and say…”How far down the line will Carousel Productions be strict in stressing a big chunk of the judging on the delegates’ environmental awareness and commitment?” Because if they gave a high premium on this part in the national finals, I expect them – as owners of the Miss Earth Pageant – to exert major influence once ladies from around the world converge in the Land of Smiles. If they do, then I would add that the Philippines still has a worthy shot of entering the semifinals. Otherwise, if the Thai organizers favor explosive beauty over everything else, then you know what’ll happen next.

I’m trying to be as positive as possible for Athena. After all, she will be wearing the Philippine sash and, like it or not, our support should follow suit. 😉 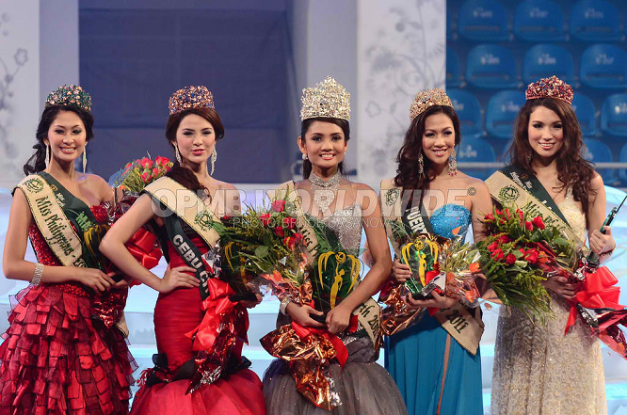 Miss Mun. of Casiguran, Athena Imperial, was at her best last night as she zoomed past early favorites to be crowned Miss Philippines Earth 2011. The 5’5″ lass from the province of Aurora defeated 9 other finalists to be the country’s representative to the Miss Earth 2011 in Bangkok, Thailand come December 3, 2011. Completing the Top 5 are Jonavi Quiray of Puerto Princesa City (Miss Phils. Air), Murielle Orais of Cebu City (Miss Phils. Water), Michelle Gavagan of Las Pinas City (Miss Phils. Fire) and Tarhata Rico of Makati City (Miss Phils. Eco-Tourism).