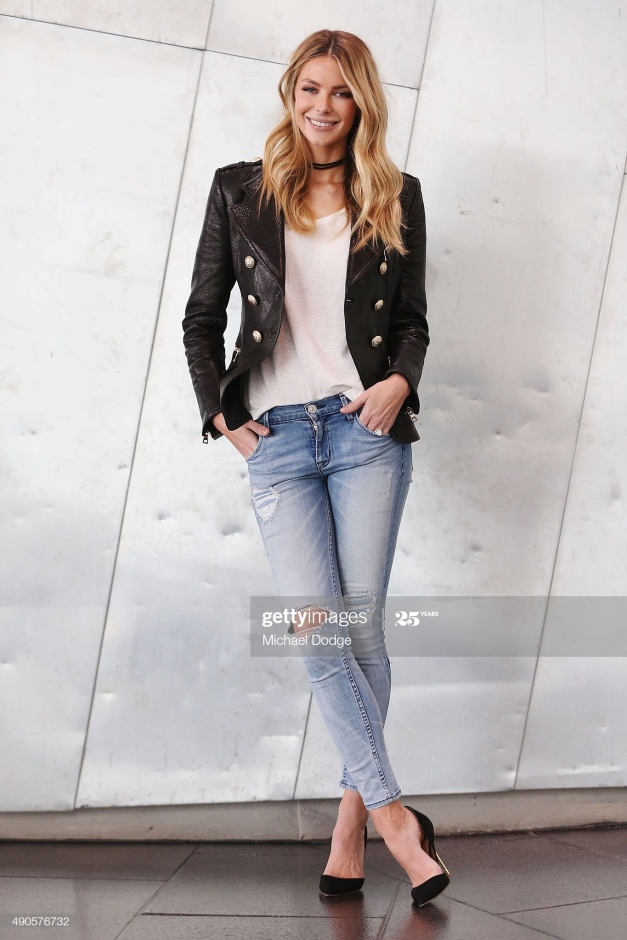 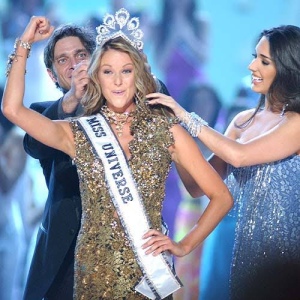 I have always had a personal liking for Aussie beauty queens with their cool beach-loving vibe, eye-candy looks and ease with whatever kind of swimsuit they wear. It’s like a peg or formula they have somehow mastered through the years. And the names of most! I just love it when the winner answers to a common one spelled differently – like Jesinta instead of Jacinta, Tegan instead of Megan, Voni instead of Bonnie, Renae instead of Renee and Caris instead of Carrie!

Last 2004, Jennifer Hawkins may have arrived in Quito, Ecuador with no clear sense yet that she will eventually zoom past all comers and become the best of the best that year. The presence alone of the combo of Miss USA Shandi Finnessey, Miss Paraguay Yanina González and Miss Norway Kathrine Sørland was enough to get any of the candidates intimidated. It was clearly her year, though, and the path to the crown was made more easy when then pageant owner Donald Trump took a shine on her, while developing a cool friendship with Shandi who eventually became her reign-long roommate in New York after winning the crown of Miss Universe 2004.

So it was the closer than close attention Jennifer received from Trump that got her involved in a scandal of sorts with the man who is now US President. There was a time when the latter described her as “the most beautiful Miss Universe I have seen in many, many years”.

But in this article on Grazia by Erin Van Den Meer, it detailed how the professional relationship went downhill and mentioned that:

”… But the model and entrepreneur found herself backed into a corner on Saturday when footage of Trump degrading her on stage at a conference in Sydney back in 2011 resurfaced and was published by every major news website in Australia and America – all while she was on duty for Myer at Derby Day in Melbourne.

In the video, Trump calls Hawkins up on stage to deliberately humiliate her after she initially refused to introduce him at the event (she claims there was a miscommunication with her management). He not only denigrates her in front of the stadium of thousands but even makes an uncomfortable sexual comment about her…”

From being apple of the eye, Jennifer was gradually sidelined to near anonymity so to speak. Which was a blessing in disguise for the beauty queen who found his actions a little too close for comfort before everything happened. In an exclusive interview on 60 Minutes Australia last year, she finally opened up about everything that happened between her and Donald Trump. Watch now.

Dear readers, care to share your thoughts about Jennifer, her reign and the role of Trump in her sudden rise to popularity that went south in trickles? 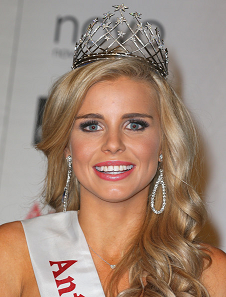 First off, if you fancy supporting Miss Universe Australia 2014 Tegan Martin (next to our MJ Lastimosa, of course), you can visit and like her official Facebook Fan Page to get updates on her training and preparation for Miss Universe 2014.

21 year-old Tegan – who is the youngest Aussie ever to win the national honor – is taking her title very seriously and wants to make sure that the opportunity she worked hard for since 2012 will yield the desired results. She aims to follow the trail of Kerry Anne Wells and Jennifer Hawkins who became Miss Universe last 1972 and 2004, respectively.

Do you like Tegan enough to see her as a tough contender for the Diamond Nexus Lab crown come December? 🙂

It’s no secret that I have constant fondness of Aussie ladies, especially the ones who have held the Miss Universe Australia titles like Renae Ayris, Jesinta Campbell, Scherri-Lee Biggs, Rachael Finch and Olivia Wells. And Jennifer Hawkins remains to be one of my all-time favorite Miss Universe titleholders.

For 2014, the national organizers have started unfolding the identities of the upcoming contenders for the crown to succeed Olivia. And so now, I present to you one of the entrants. She is from Sydney and her name is Natalie Roser. 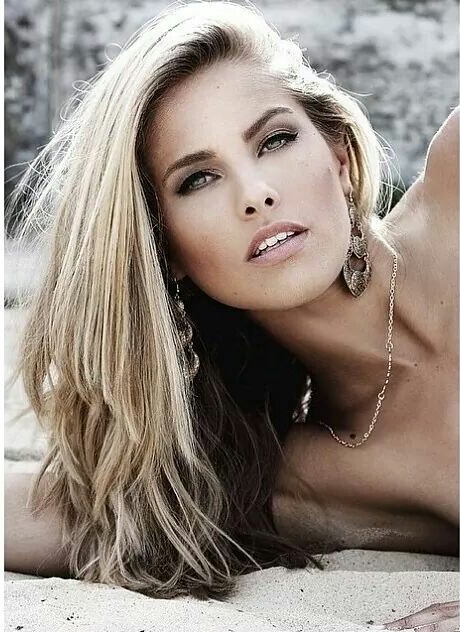 Natalie Roser, one of Sydney's entrants for Miss Universe Australia 2014

Sunday Specials: whose Miss Universe year will it be?

If we are to consult the list of Miss Universe titleholders, it’s not hard to tell which continent has not claimed the crown for the longest time now.

– North America is the most recent with Olivia Culpo winning last year in Vegas and Ximena Navarrete in 2010, also in Sin City.
– Africa is the next recent with Leila Lopes wresting the title back in 2011.
– South America’s last winner was Stefania Fernandez who was elected in the Bahamas last 2009, with her fellow Venezuelan Dayana Mendoza also topping the 2008 edition.
– Asia comes in next with Riyo Mori of Japan defeating all delegates during Miss Universe 2007.
– The Carribbean’s latest was 2006 in Los Angeles. That was the time Zuleyka Rivera captured top honors.
– As the world’s largest nation-continent, Australia grabbed their latest crown in 2004 with Jennifer Hawkins.
– Europe is the cellar-dweller when Oxana Fedorova of Russia was proclaimed winner in 2002. That victory wasn’t fully consummated, though, after she was dethroned and Justine Pasek took over. So in terms of full reign, Mona Grudt of Norway was the last European to complete one year.

So what’s the sense in all this?

Simple. Continent-wise, it is high time for Europe to win Miss Universe once more. And with Moscow hosting the current competition (the last – and only other European host was in 1973 when Athens led and our Margarita Moran won), don’t you think they rightfully deserve to snatch the Diamond Nexus Lab diadem? Or are you of the leaning that Miss Philippines Ariella Arida should be the one, being that the country’s last win was also in Europe?

I really love the laid-back coolness of Miss Universe-Australia 2011 Scherri-Lee Biggs. I don’t know what it is with Aussie beauties who can pull off a great mix of modern freshness spiced up with touches of shabby chic here and there. If you ask Miss Universe owner Donald Trump, his favorite Miss Universe of all time is Jennifer Hawkins who won the title way back in 2004. And his extra fondness for Aussie delegates extends to the likes of Jesinta Campbell (2nd Runner-Up last year). This early, I can say that Scherri-Lee will give the other ladies a run for their money. And if she equals or exceeds her predecessor’s placement, I’d be the last to question the result.

One of my favorite Miss Universe winners bares all for Marie Claire mag!

There are only a few past Miss Universe winners (save for the Filipinas – Gloria Diaz and Margarita Moran – since they will always top my list) who belong to my all-time favorites because of their unforgettable faces and/or memorable reigns. For example, I like Miss Universe 1993 Dayanara Torres because she made Manila her homebase for awhile when she entered Philippine showbiz in the 90s and became part of local pop culture when she hosted her own dance show (“Eezy Dancing”) which has metamorphosized since then into what “Shall We Dance?” is right now.

Another lady who remains permanently etched in my mind is Miss Universe 2004 Jennifer Hawkins. This gorgeous Aussie is said to be Donald Trump’s favorite among his winners as well. I don’t blame him. She is the encapsulation of everything one looks for in a near-perfect beauty queen – beautiful face, killer body, towering height and an all-around warm personality. So when I discovered that she actually posed in her birthday suit for Marie Claire magazine (Australian edition), I just had to order a copy (it’s being processed now) and blog about the same! Just look at her on the cover of the mag’s February 2010 issue:

An UN-photoshopped Miss Universe 2004 Jennifer Hawkins on the February 2010 cover of Marie Claire.

Here’s an excerpt from the teaser article:

In an exclusive 5 page feature, Jen not only reveals her amazing body but also the pressures she faced since being crowned Miss Universe in 2004 and rising to fame.

In marie claire’s exclusive interview, Jennifer Hawkins confesses that she never could have done a shoot like this two years ago.

“I would have been worried about what people thought, whether it was the right decision – a thousand different things… But over the past year and a half I’ve grown into myself, and I’m more confident and comfortable within the modelling industry. I did it for the experience… It felt quite sensual and sexy. I felt empowered”.

While naturally slim, and with a body most of us would do just about anything for – Jen tells marie claire about the hard work that goes into her success, which includes keeping her body in great condition through regular exercise and a balanced diet. Jen speaks candidly about the highs and lows she has experienced in her rise to fame and her plans for the future, which includes moving in with her boyfriend Jake Wall in the year to come.

If you’re an Aussie or living in/visiting Australia right now, I suggest you grab a copy. And fast. I’m pretty sure this one will sell like the proverbial hotcakes and run out of stock faster than you can chant “Ozzie Ozzie Ozzie, Oy Oy Oy!”