The Miss World Philippines Organization respects Ganiel Krishnan’s decision to relinquish her title as MWP 2021 2nd Princess to resume and prioritize her career as a journalist.

Taking her place is Janelle Lewis who gladly accepted the duties and responsibilities that come with her crown.

Below is the message of Ganiel:

“I regret to inform you of my decision to relinquish my Miss World Philippines Second Princess 2021 title and consequently resign from the Miss World Organization effective immediately.

As you very well know, I have a thriving career as a lifestyle and entertainment news reporter in ABS-CBN before I entered the competition and have never kept my intentions to go back to it a secret, regardless of the outcome of the pageant.

While I am deeply honored to have been named a Princess in this year’s MWP search, my contractual obligations with the network will not allow me to serve two masters. Realizing this led me into making a decision to pursue the dream which will have the greater impact to actually serving my fellow Filipinos and that is through broadcasting.

I wish to thank you, Mr. Arnold L. Vegafria, as well as the entire MWP Organization, for taking good care of us and providing all of pageant participants wonderful experiences that we will surely cherish for a lifetime. I also wish my queen sisters the best of luck in their respective endeavors in the future.

I truly am grateful to have joined Miss World Philippines 2021, which also marks my last foray into the world of pageantry. It was one big learning experience for me which, I know, will help me score even greater triumphs in the future. 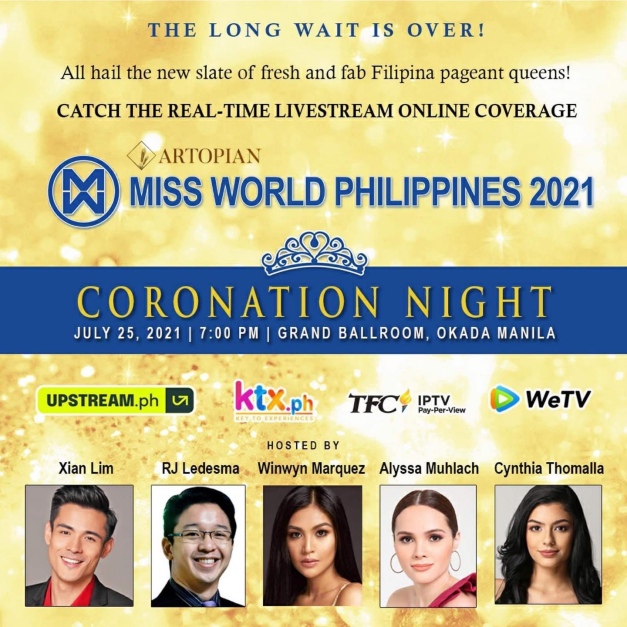 Note: The blog entry below is the full transcript of the article I submitted to Rappler Entertainment about the subject.

“…the differences within generations can be just as great as the differences across generations, and the youngest and oldest within a commonly defined cohort may feel more in common with bordering generations than the one to which they are assigned. This is a reminder that generations themselves are inherently diverse and complex groups, not simple caricatures.”

Miss World Philippines 2021 is increasingly becoming an interesting case in studying the presence of two young (and entirely different) generations of youth in one roster of forty-five (45) candidates. This can be attributed to the fact that – prior to becoming an Official Candidate – the qualification has been set with a minimum age of 16 and a maximum of 28. That is a wider spread of twelve (12) years, as compared to previous decades when the youngest would be 18 and the oldest at 25.

Further to this, the presence of both Millennials and Centennials is cut sharply in the middle. Those who belong in the former are currently aged 23-28 numbering twenty-three (23) in total, with a headcount of twenty-two (22) for the younger ones grouped between ages 16 to 22.

Now what does that tell us? Diverse mind sets can be one clear difference. While millennials enjoyed the rapid evolution of technology on a scheduled basis, Generation Z members are already living in the midst of an “always on” technological environment. This factor plays a role in defining what is most important for each one of them. And if you add pageantry in the mix, the uniqueness gets more clear if you dissect how they are going through their respective game plans in achieving their objective. To win a crown, that is.

There are forty-five (45) wide-eyed Filipinas all vying for several crowns at stake, but none more aggressive as the two highest titles of Miss World Philippines and the newly-acquired franchise of Miss Supranational Philippines. In fact, the destination countries for these two missions are just as exciting. Miss World 2021 will be hosted in the Caribbean island of Puerto Rico, while Miss Supranational 2021 will take place next month in Nowy Sącz – a city located in Southern Poland. But who’s to be choosy at this point when the six other honors will also afford the winners to travel to such exotic places like Mauritius, Bolivia, Lebanon and Egypt to name a few? 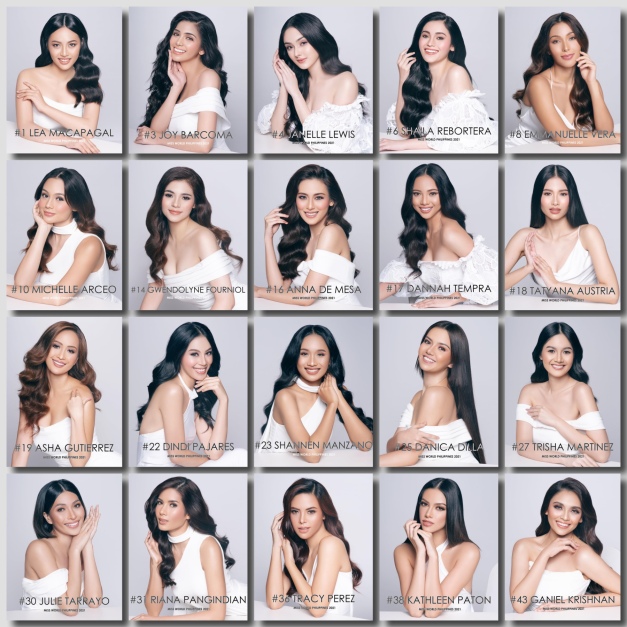 Now who among the candidates have shown what it takes to figure out well during the Finals Night this coming Sunday, July 25 at the Grand Ballroom of Okada Manila? Plenty, I must say. But let us short-list around twenty (20) names – the number of qualifiers who will make the first cut – a mix of fast-track challenge picks and likely cumulative high scorers. According to their respective numbers now:

Not knowing yet who the actual winners of the ten (10) different challenges could alter the composition above. They will only be announced during Coronation Night. But I am certain most of them will be there. 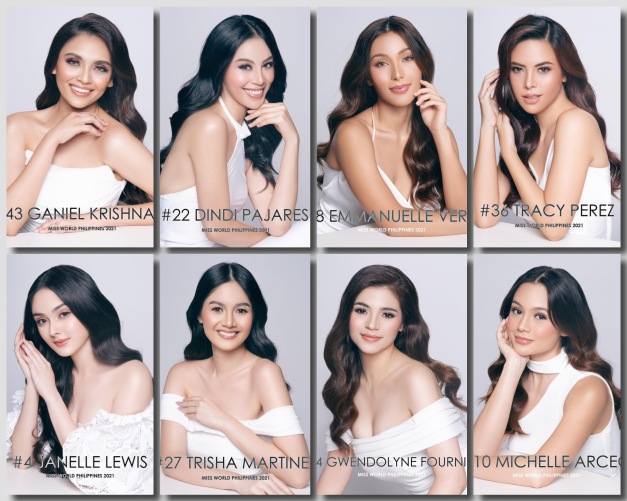 For the title of Miss World Philippines, the likely contenders are Ganiel Krishnan, Emmanuelle Vera and Tracy Maureen Perez. They each possess the kind of template the Miss World Organization is looking for. At this point, I would go for Ganiel Krishnan. She needs to keep in mind, though, that the two others are very close on her heels. One wrong move (or answer) can quickly tilt the favor away from her.

For the title of Miss Supranational Philippines, the names of Dindi Pajares Anne De Mesa and Kathleen Paton are sure to be considered. Who is the most 100% ready for the Poland assignment? I daresay Dindi Pajares to be the one. She can fly anytime as soon as a Schengen Visa is stamped on her passport.

Meanwhile, Miss Eco Philippines can zero in on Shaila Rebortera, Trisha Martinez and finally, Emmanuelle Vera – my choice to win this crown and go to Egypt. Its Teen title-counterpart, on the other hand, is a three-way toss among Janelle Lewis, Tatyana Austria and Dannah Tempra. This is tough, but I would go for Janelle Lewis.

Bolivia-bound options for Reina Hispanoamericana Filipinas – in my opinion – are Riana Agatha Pangindian with Tracy Maureen Perez and Shannen Manzano. The bigger competition puts a premium on the all-around performer, so I’d say Tracy Maureen Perez can fit the bill to a T.

For Miss Philippines Tourism, the possible placers are Trisha Martinez, Joy Barcoma and Danica Dilla. Unlike before, a Lebanon trip awaits the winner, and the classically-beautiful Trisha Martinez might be doing it for us.

For the newest title of Miss Environment International Philippines, signs could be pointing to Ganiel Krishnan, Asha Gutierrez and Gwen Fourniol. Now this being an inaugural staging in Mauritius, any kind of hints on what the organization is looking for still remains vague. I am leaning on the trilingual French teacher Gwen Fourniol. She has that unique kind of X-Factor in my eyes.

And for Miss Multinational Philippines, I am placing my bets on either Michelle Arceo or Shaila Rebortera. The Indian organizers were unable to stage their second edition yet. But if they do, I choose Michelle Arceo as the winner.

Whew! Those predictions can be quite the beautiful struggle, especially if you consider that each international competition has different pegs for the kind of representative who can bring home the victory, or potentially do well in the fight. The final results can go to various directions and/or combinations. But the forecasts above are reasonable and realizable.

Interestingly enough, even the names listed for each title are reflective of the fight between the Millennials and Gen Z. It only goes to show that – while each generation displays relatively different mindsets, one objective is clear – be crowned and not go home empty-handed. 45 contenders have this common thought. But only ten – including two princesses – will get podium finishes.

The Finals Night of Miss World Philippines 2021 will be telecast over GMA-7 on July 25 at a slightly delayed time of 10:30pm. Now for those who want to get first dibs on the outcome, there will be an early live streaming at 7pm on WeTV, ktx.ph and Upstream.ph.

Congratulations to the Top 10 Finalists for the #TopModel Challenge of Miss World Philippines 2021 chosen during the Charity Gala Night/Pre-pageant held at the Grand Ballroom of Okada Manila.

The winner will be announced and fast-tracked to the Top 25 finalists on coronation night this coming Sunday, July 25.

Congratulations to the Top 10 Finalists for the Beach Beauty Challenge of Miss World Philippines 2021 held at Cove Manila.

One of them will be fast-tracked to the Top 20 during the Finals this coming Sunday, July 25. 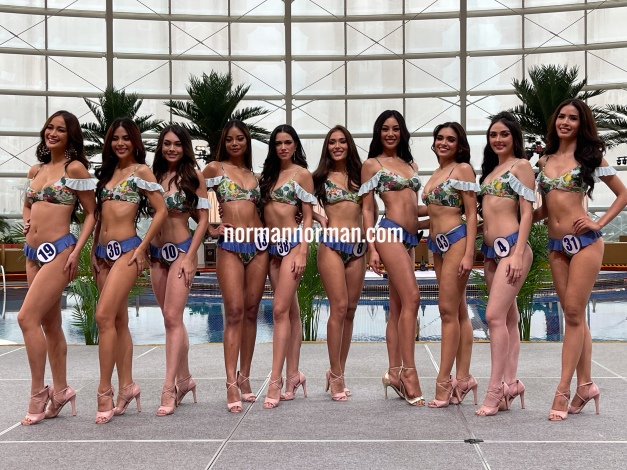 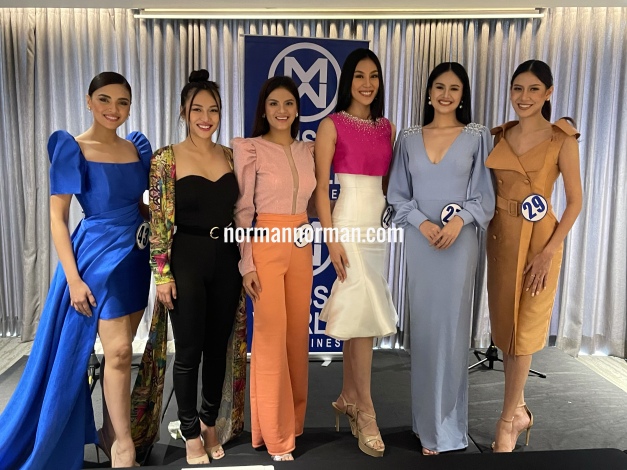 One of them will be fast-tracked to the Top 20 on Finals Night this July 25.

Presenting the 7 Finalists for the Miss World Philippines 2021 Multimedia Challenge:

One of them will be fast-tracked to the Top 20 on Finals Night this July 25.

Tomorrow, we shall know the finalists for the HEAD-TO-HEAD CHALLENGE. And on Wednesday, the BEACH BEAUTY CHALLENGE will be in full swing at the Cove Manila Beach Club in Okada Manila.

Thursday will be the Charity Gala where the Ten Talent Finalists will perform live and be judged.

All the fast-track winners will be announced on Finals Night July 25.

Below are the Miss World Philippines 2021 Official Swimsuit Photos 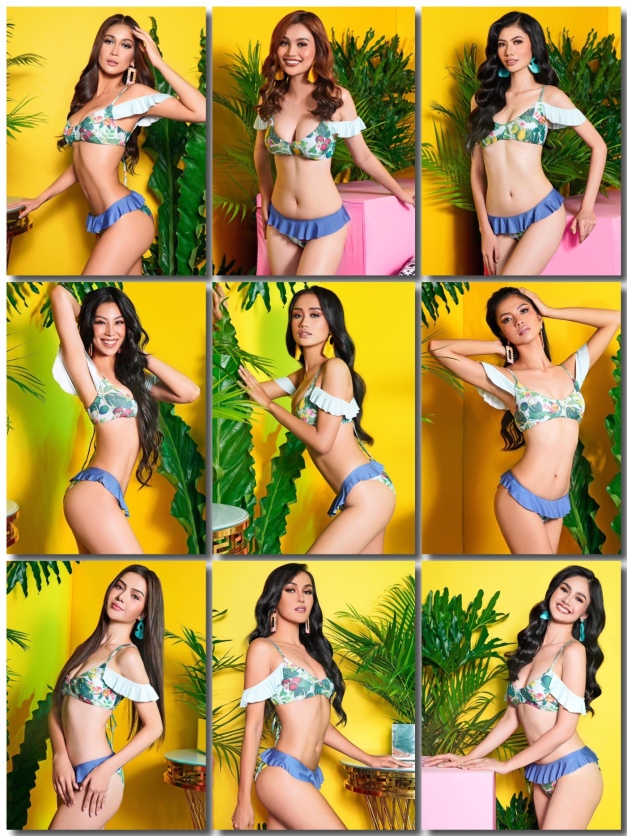 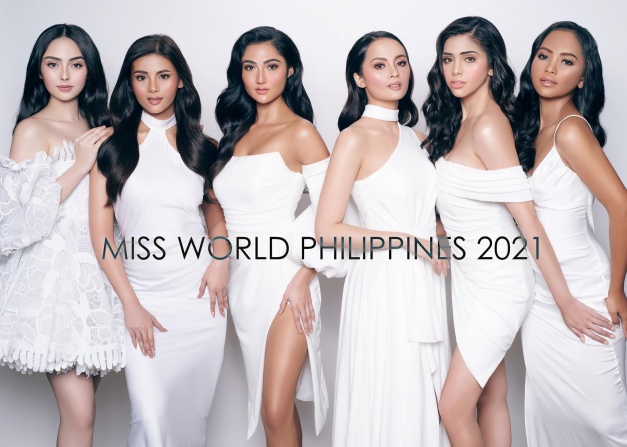 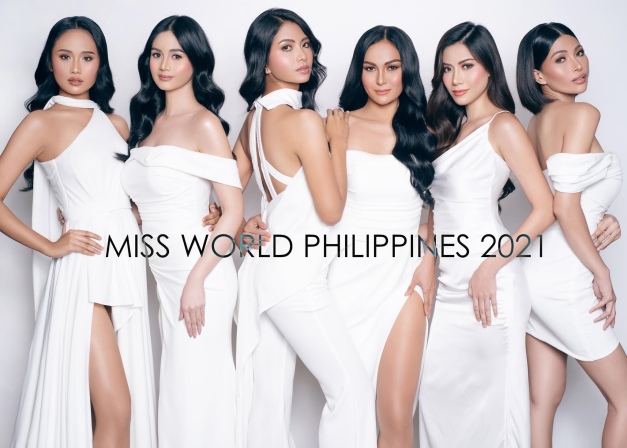 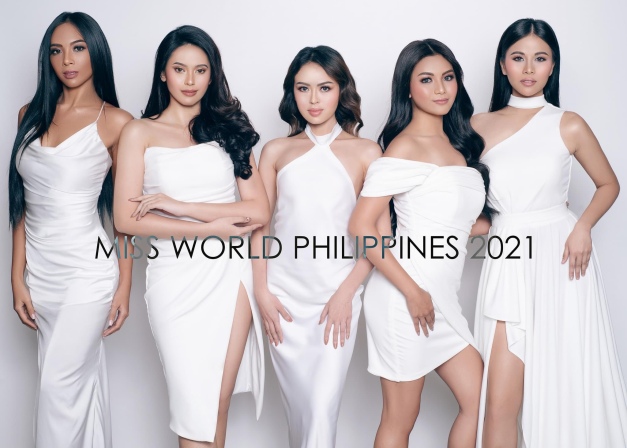 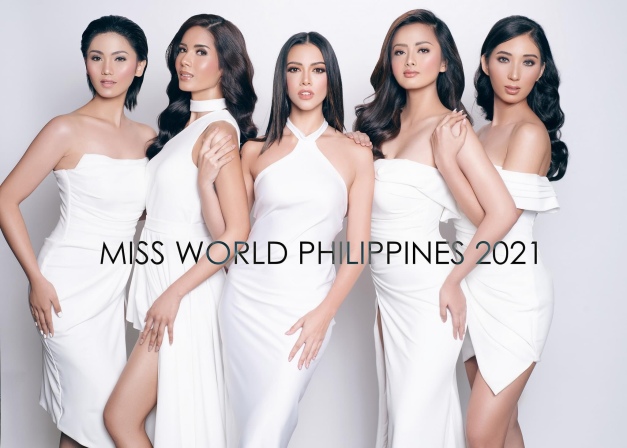 Miss World Philippines 2021: The Candidates in their Bench Swimsuits

Here are individual photos of the Miss World Philippines 2021 Candidates during the Press Presentation held at the Cove Manila of Okada Manila.

I placed them in five grids of nine each for a quicker upload of the page. 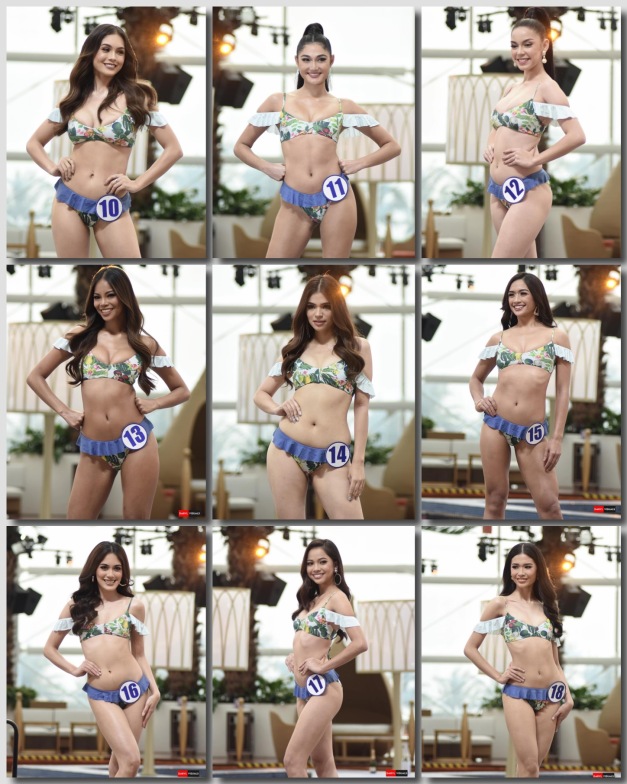 Presenting the Official Headshots of the Miss World Philippines 2021 candidates as taken by Mark Neto Diaz with his take on the entire shoot below:

“This is my 3rd year of doing the official headshot of Miss World Philippines. The more I do it, it brought me so much understanding towards women. 👸

Different stories with different beauty. So I thought of this upon setting up a shooting peg for this year’s official portrait.

With so many beauty filters and things going on in social media blinding us on how a beauty queen or a woman should look like, I told myself I want it fresh and to show them. Until I ended up saying…

“Why not let the shooting be in white?”

These words inspire me a lot. So I decided to let the women be in white. Clean and not commanding color so the highlight will be their uniqueness and individual beauties. Relax hair and less make-up. 🌼

What’s difficult about it is to set lighting that will work with everyone’s profile. Each lady has different skin tones and structures, meaning different key lights. But a clean and crisp light point will never go wrong. It requires a lot of understanding. 📸💡

The shooting direction was a bit challenging for me. I had to be versatile and full of poses that day – so I did. Working 16 hours is a record-breaker in my entire career. My back hurts a lot that day but it didn’t stop me from giving my best until the very last candidate. 💪⚡

Now I must say it’s all worth it. I’m in love with what I’ve created. I believe when your vision is clear, your body and self intuition follows.

One word is not enough to describe the beauty of a Filipina woman. Each one of us is beautiful and we must appreciate it. ❤

I wanna say thank you to all people who partake and be part of this project. Let me send you so much gratitude.

To myself to never stop learning and doing things that challenge you. You grew so much and I’m always proud of you. God this is all for you. You’re the best!” 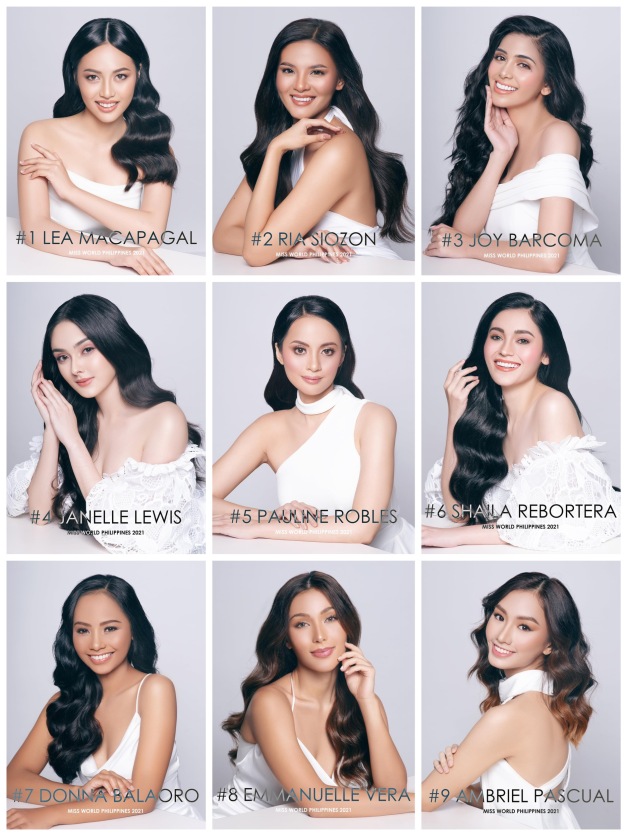 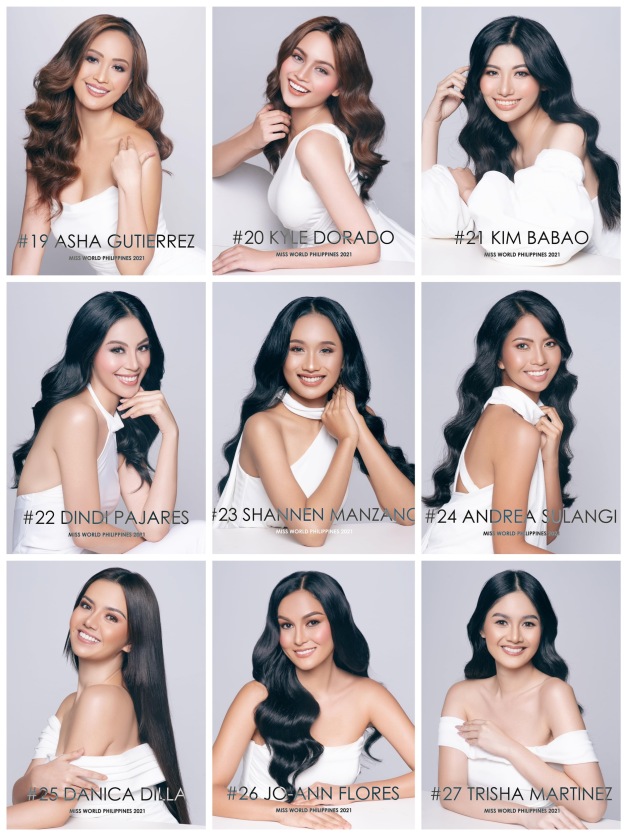