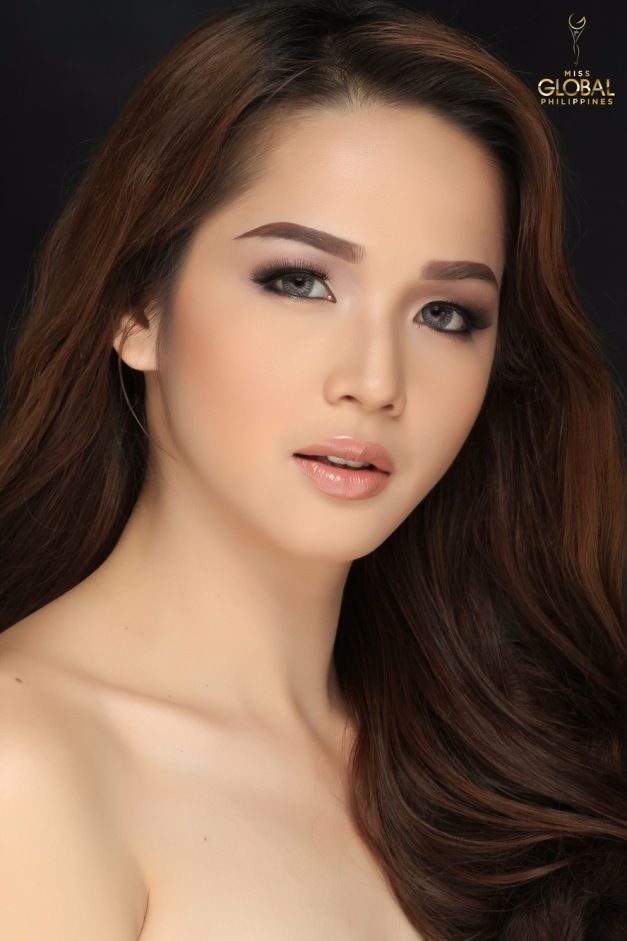 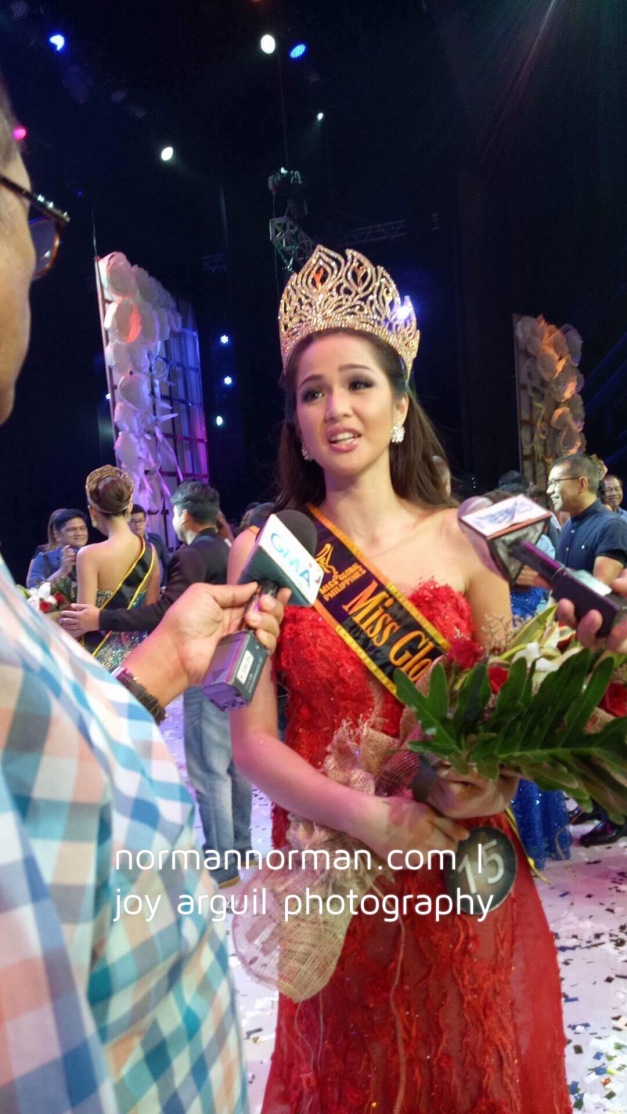 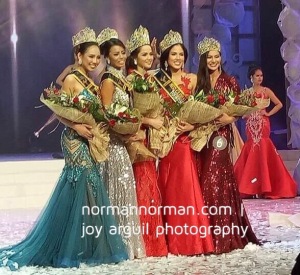 Mary Ann Mungcal from Pampanga (the same province of outgoing titleholder Camille Hirro) was crowned Miss Global Philippines 2017 during the close of the finals held at the Newport Performing Arts Theater of Resorts World Manila. She will now set her sights on representing the country in the next edition of Miss Global 2016 later this year in a still undiclosed host country.

Earlier, Mungcal cornered a lion’s share of the special awards – including Best in Swimsuit and Long Gown – before slowly climbing to the top of the rankings. She fumbled during the Top 10 Q&A but redeemed herself fairly well during the Top 5 that sustained her pole position on the judges’ scoresheets.

Two for the Road: Miss Global Philippines and Miss Manila

First is the Miss Global Philippines 2017 at Resorts World Manila where Camille Cj Hirro will crown her successor among the 22 beautiful contenders below. See who will take home the victory at the Newport Performing Arts Theater.

Best of luck to all the ladies, but most especially to my favorites Jacqueline Mayoralgo, Mary Ann Mungcal, Charmaine Aller, Frencheska Frias Nueva and Christine Balaguer.

normannorman.com will be at the venue to cover with Joy Arguil and Joseph Gerard V. Jose.

And over at the PICC Plenary Hall at CCP Complex in Pasay City, the thirty (30) candidates of Miss Manila 2017 will try to outshine each other as they go onstage for the crowning of a new face for the city to succeed Cristelle Tolentino.

I have more than a few ladies here who I want to land on top, such as former Binibini 4 Maria Gail Tobes, Kristine Montes, Joanna Tolledo, Katrina Sese and Athena Catriz.

Who will be the lucky girl to win PhP1 Million Pesos in the end?

The swimsuit competition winners flanked by the judges and organizers 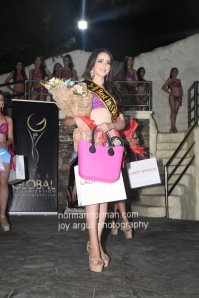 Last night, the swimsuit competition of Miss Global Philippines 2017 was held at La Carmela de Boracay with Mary Ann Mungcal (left photo) nosing out the other ladies to be named Best in Swimsuit. Jacqueline Mayoralgo and Dianne Santiago joined her for a Top 3 podium finish.

Earlier, the ladies spent the day doing fun activities on the beach before preparing for the night event that is considered an important segment of the entire pageant. 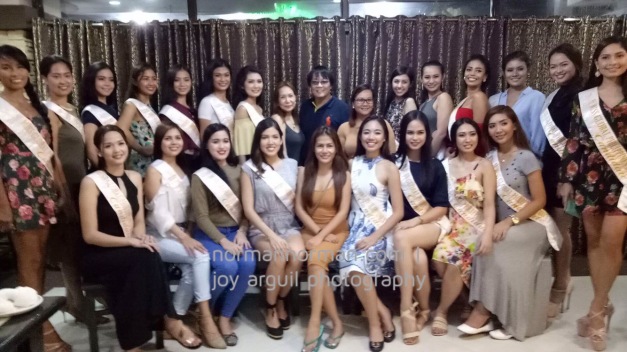 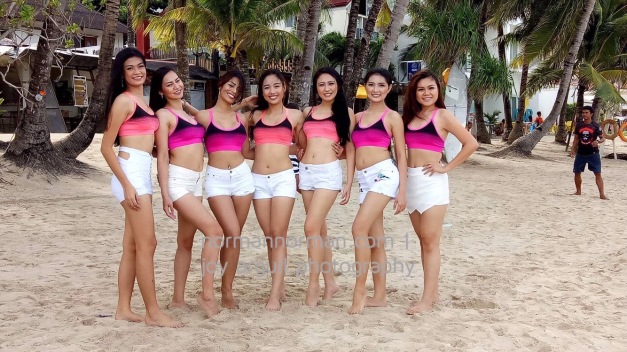 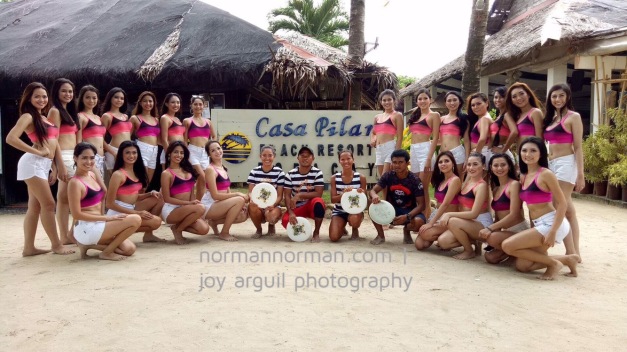 Some of the less-hyped beauties of Bb. Pilipinas 2013 (Photo credit: Boyet Blas)

Let’s be honest. Nobody joins a beauty pageant for the experience alone. There are those who openly declare so. But at the back of their heads lies an underlying wish to upend the favorites and become successful in their first (or second) attempt in the big league. Because if the only motivation is to meet new beautiful friends and gain intermittent public exposure, then why go through all the trouble of training and preparation when one can easily join a Contiki travel tour where chances of getting acquainted with young people from all over the world are guaranteed, with the opportunity to visit other countries being part of the package. 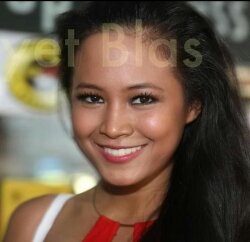 Back to the subject matter, does getting little (or no) hype mean reduced pressure for the Bb. Pilipinas 2013 candidates who are barely noticed by the ogling eyes of pageant fans and followers? Weeks have passed and there are those among the 50 wannabes who remain unnoticed. It’s not that they are significantly less beautiful. I think it’s more of letting the frontrunners shine every time. They may try making an aggressive move from time to time, but still fall short of making an impact.

Here are six ladies who have remained in the wings long enough. In order to make the most of the experience, they should start stepping out of the shadows of the favorites and begin their quest in a less silent manner. We all know that Amanda Navasero, Nicole Donesa, Lourenz Grace Remetillo, Paula Bernasor, Ellore Punzalan and Jacqueline Mayoralgo are ever present in all the activities. But who genuinely cares outside of their respective supporters?

In the very competitive world of beauty pageants, low profiles do not major ripples make. I remember last 1997 when Abbygale Arenas joined Bb. Pilipinas. She was rooming then with an unknown Kristine Florendo (who was only tagged as the niece of showbiz personalities Isabel Rivas and Dennis Roldan). The former constantly reminded her to never never step out of their unit unmade, shabbily dressed and in a non-winner mode. There should always be the mental conditioning that one is already a beauty queen in order to project a victorious aura. Of course we all know what eventually happened. Both ladies topped that edition with Arenas going to Universe and Florendo to World.

So this I say to the less popular girls – bring on your A-game asap! There will always be a room or two for surprises in the finals. And being called to center stage to assume a semifinal or final spot never fails to shoot one’s confidence beyond the ceiling of the Araneta Coliseum.

Okay, I’m going back to my (real) work now. An irate client is bugging me. 😉 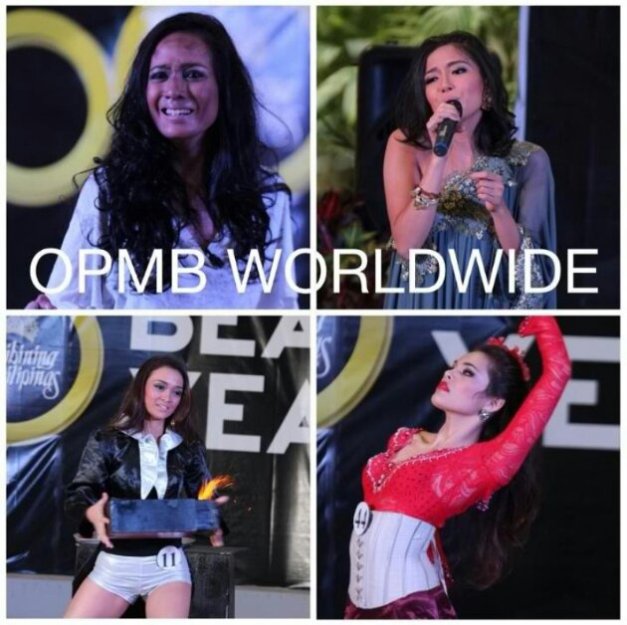 Of the more than a dozen Bb. Pilipinas 2013 Official Candidates who took part in the Talent Show, you would think that the potential winner would be the one with the most novel skill – probably a magician-wannabe like Anna Carmina Antonio. But no, the ladies who really brought down the house could boil down to a trio of entries from Aces & Queens who showed their vocal chops while presenting themselves with class and refinement. Jacqueline Mayoralgo, Mariel de Leon and Pia Wurtzbach did that and made their marks quite well.

But while I am impressed with the singing abilities of Jam and Pia, my vote would have to go to Mariel whose classical singing can leave anyone in awe. I can’t remember a time when a Bb. Pilipinas candidate performed such stirring gift of voice. These three should fight it off for the Miss Talent award if the judges are thinking in the same wavelength.

On other fronts, there were those who danced (like Aiyana’s belly-dancing, Gabrielle’s flamenco and Angeli’s hula hoop turn) and acted (like Rhea Nakpil), but I would place them as competent performers instead of strong contenders. 😉

Below is a video showing some of the ladies in action, courtesy of Jory Rivera of OPMB Worldwide.

And here’s Mariel de Leon with her classical singing (courtesy of Missosology Coverage).

What are the chances of having girls with the same names in a group of fifty? Very high. But let’s skip long write-ups for now. I will let pictures speak in the meantime. Discussions and assessments will be reserved for another day. Enjoy them first! 😉 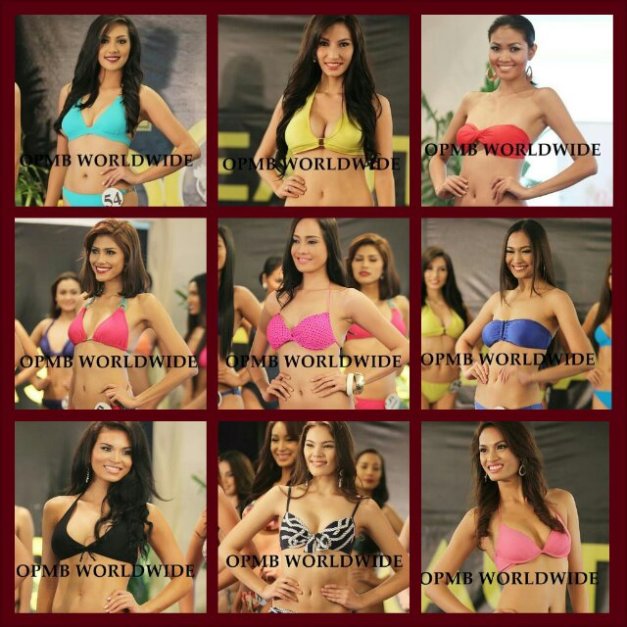 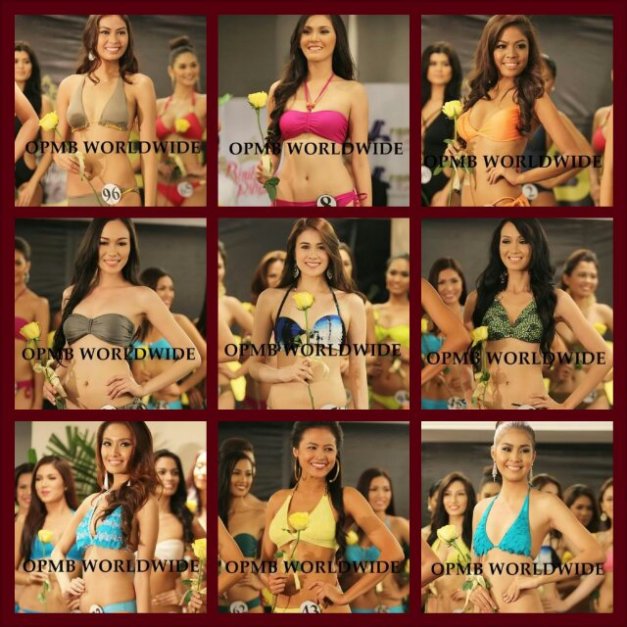 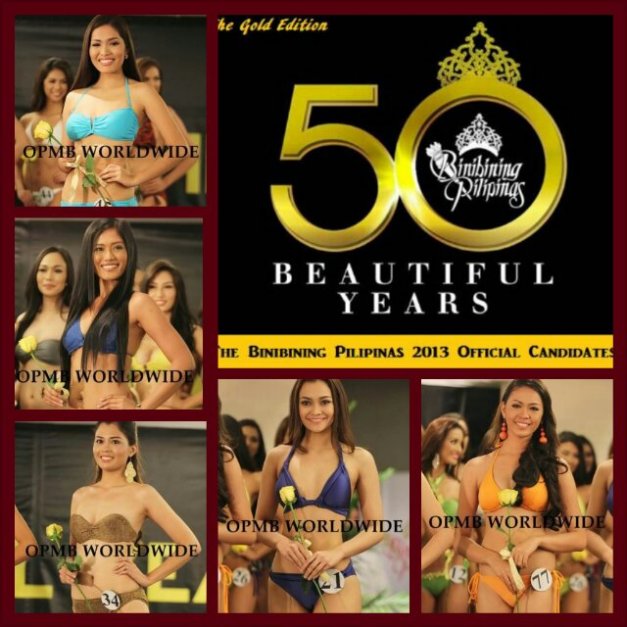 All photos courtesy of OPMB Worldwide. 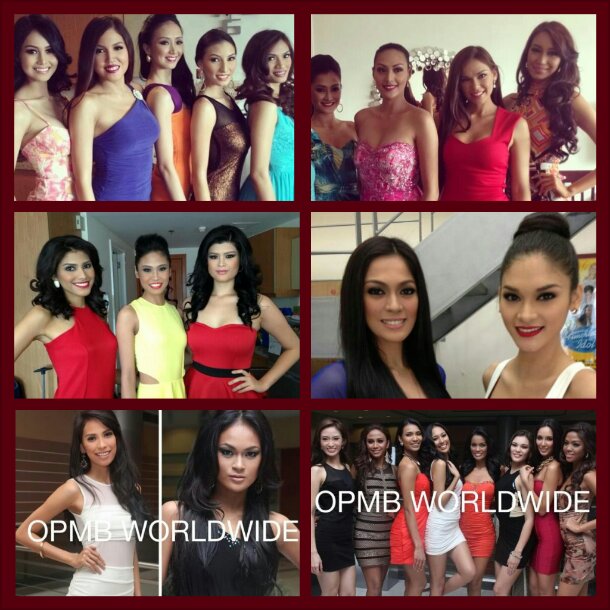 A multitude of choices...

Your mind is reeling from the flood of beauties... 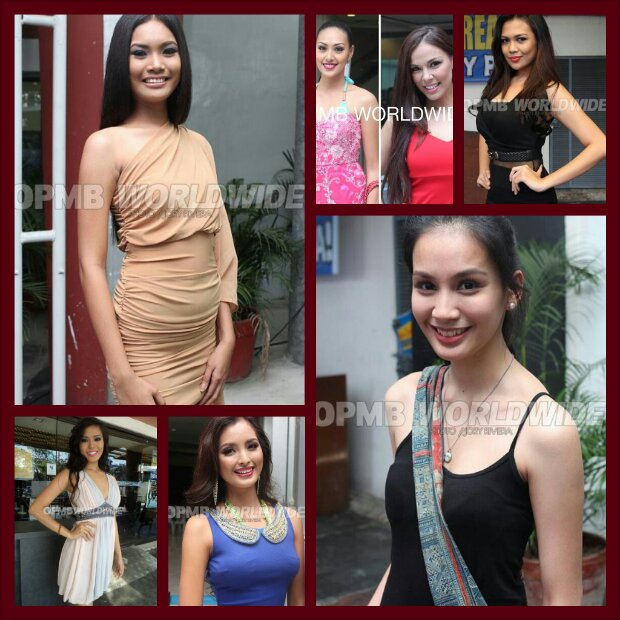 If it's going to be like this every year, then I would be the happiest pageant dreamer!

If each one of us is a member of the Bb. Pilipinas 2013 Screening Committee, and asked to come up with our preferred list of Official Candidates, who will you list down as your choices?

For this purpose, let’s limit the number to just exactly thirty (30) to make it more exciting.

* – Heights are based on online news reports and articles. The actual measurements will be released by BPCI once the Official Candidates are posted on the pageant’s website.