When you have 116 beautiful and ultra-competitive delegates from all over the world competing for just one crown, the prospects of coming up with a highly accurate ‘fearless forecast’ are always middling somewhere in the 50-60 percent range.

Whoever ends up winning come late Saturday must really have her lucky stars shining bright all night. There are already so many factors entering the equation that lady luck plays a major role, just like in coming up with predictions for the same. At any rate, below is a photo collage of my Top 15. I can see one of them bringing home the blue crown, but who in particular? 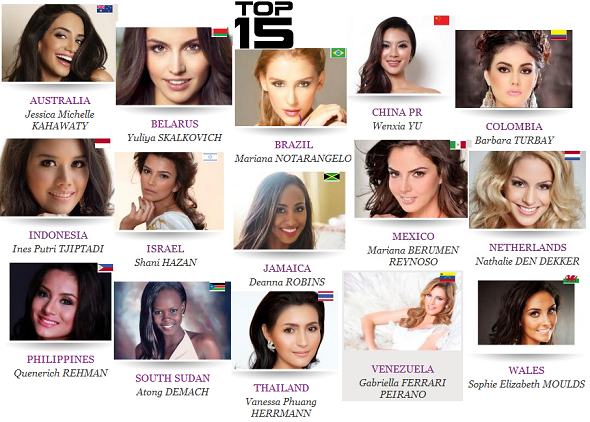 From the Americas, four ladies entered my Top 15 and they are Brazil’s Mariana Notarangelo, Colombia’s Barbara Turbay, Mexico’s Mariana Berumen and Venezuela’s Gabriella Ferrari. Among them, Mariana and Barbara have the strongest potentials of taking it all the way. Both Latinas would move heaven and earth to get hold of the title, and continue the always remarkable track record of the continent in the pageant.

From Europe comes three gorgeous candidates – Belarus’ Yuliya Skalkovich, Netherlands’ Nathalie den Dekker and Wales’ Sophie Moulds. For obvious reasons, Sophie has the major inroad to the top of the heap, being Welsh and favored by Julia Morley herself.

From the Carribbean, Jamaica’s Deanna Robins zooms on my list, partly because of her excellent record in all Miss World events. As such, she is a dark horse who just might do a Lisa Hanna (Miss World 1993) – frankly, a foreseeable possibility.

From Africa, there’s Atong Demach of South Sudan. She may not be the loveliest African delegate out there, but the articulate lady commands a certain charm and class that would be hard to get lost on the judges.

Oceania is represented by Australia’s Jessica Kahawaty. This Aussie celebrity knows how to maximize her assets (both physical and otherwise) to full use. Her splendid record in almost all the events cannot be ignored either.

And finally, Asia has the most for me. A quintet of stand-out representatives – China’s Wenxia Yu, Indonesia’s Ines Putri Tjiptadi, Israel’s Shani Hazan, Thailand’s Vanessa Phuang Hermann and the Philippines’ Queenie Rehman – registered well on my score sheet to take the lion’s share of spots in the Top 15. Here is where my armchair judging went ballistic. China is a shoo-in for the Top 7, while Ines and Vanessa could make it to Top 15 for two entirely different – but plausible – reasons not unknown to many. The Israeli rep, on the other hand, is a sleeper. She could surprise everyone and become her country’s 2nd winner – not an impossibility but not highly likely as well. And this leaves us with our very own Queenie. Her performance in the events so far could rival Gwen’s last year. But can she translate this into something that could match or exceed the latter’s placement in the finals? Gut feel tells me that she can, barring any major blocks from the powers-that-be.

Trimming the 15 down to the Top 7 is tough, but my take is that the following will go this far:
Australia – Jessica Kahawaty
China PR – Wenxia Yu
Colombia – Barbara Turbay
Jamaica – Deanna Robins*
Mexico – Mariana Berumen
Philippines – Queenie Rehman
and Wales – Sophie Moulds

From this point, the winner could be anyone’s guess. It all depends on who the judges will favor. My vision has Miss China PR Wenxia Yu and Miss Philippines Queenie Rehman battling it out in the Top 3, together with Miss Wales Sophie Moulds.

Two of the three delegates I would like to see as the final ones standing for the Miss World crown – Wenxia Yu of PR China (left) and Queenie Rehman of the Philippines. Sophie Moulds of Wales is the third one.

If my Top 3 ends up the same as the actual results on finals night, then there is a specific reason for each of them winning. Miss China PR coming out on top favors the host country. A Chinese Miss World in a China-hosted Miss World has already happened before. A repeat will no longer make my jaw drop to the floor, maybe just to my knees. Meanwhile, Miss Wales being crowned winner reflects the influence of Julia Morley in the results, just like the eventful journey of Ireland’s Rossana Davidson in the past. And how about Miss Philippines Queenie Rehman winning our very first Miss World crown? It is the fervent wish of all Filipinos around the globe. And I’m not dreaming wide awake. There is this window – however widely opened or half-closed – that our rep can take advantage of. If she ends up with the blue crown, then we can all jump, smile, or cheer wildly that the objective has been achieved. 😉

* – I removed Belarus from my Top 7 and replaced her with Jamaica. After some thorough consideration, I believe that Deanna is more deserving of that spot.

So far, so (better than) good!

All’s good between China and the Philippines, at least in Miss World 2012, with Wen Xia Yu (L) and Queenie Rehman posing in one frame with smiles on their faces. 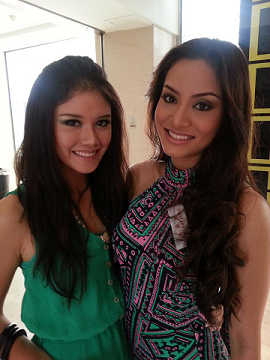 In the ongoing Miss World 2012 in Ordos, Miss World Philippines Queenie Rehman is sticking to her game plan with such spirited excitement. As a result, she is slowly getting noticed by everyone as a strong competitor to watch out for. During the talent auditions, she sang ‘Stand by Me’ and made it more special by injecting freestyle beatboxing that roused the audience and led to wild applause and a standing ovation. This thrilled our bet to no end, especially when she was named one of the Top 25 who will perform in the Talent Finals next month.

And it doesn’t stop there. Queenie has already been included in the 25 shortlisted delegates for the Top Model finals (also pegged for early August) where they will be wearing fashion designs made in Inner Mongolia. This should build her momentum even more going into the Beauty Beauty Event. 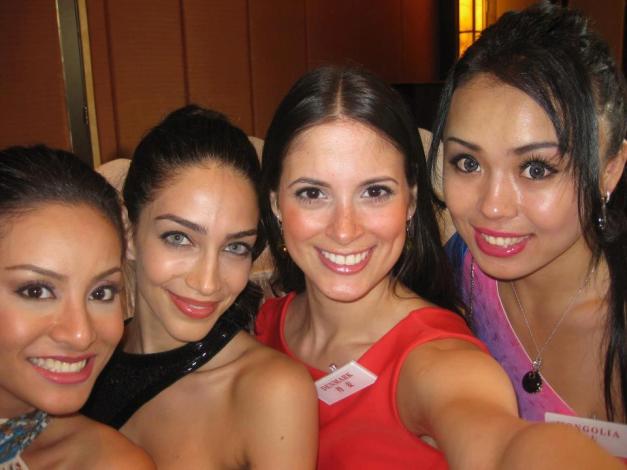 Next stop will be the Beach Beauty and Sports Events where she can equally excel due to her highly regarded figure plus fondness for physical games and/or contact plays. At the moment, all ladies are busy for the Opening Ceremony that should have already been conducted by now.

In the Multimedia Award, Queenie remains in the running, despite Misses Vietnam and Nepal getting past her ‘likes’ in the Official Facebook Fan Page. So if you haven’t supported her in this part yet, now is the time to do it (there’s a permanent link on the right side). And you can also encourage your friends to do the same.

Let’s all unite in helping Queenie get to her main objective: winning the first Miss World crown for the Philippines! 😀