In shots taken by Mark Neto Diaz with Creative Direction and Styling by Vhee Co plus swimwear by Bench Body, here are the 40 Beach Beauties of Miss World Philippines 2018.

By the way, they did their own makeups using BYS Cosmetics PH.

Be vertically challenged now with Official Candidates 1-40. Then share your personal favorites below: 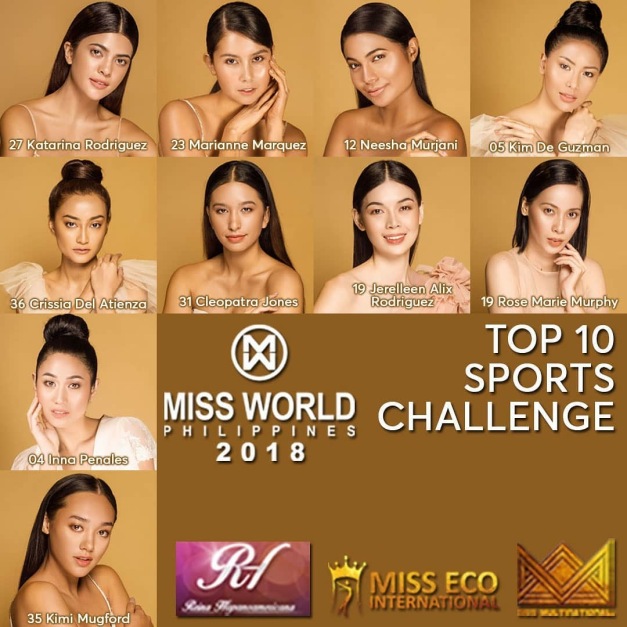 Announcing the ladies who made it as Top 10 Finalists during the Miss World Philippines 2018 #SportsChallenge held at Victoria Sports Tower yesterday:

Kudos to you, girls!

May the best sportswoman win the fast-track slot for this challenge! 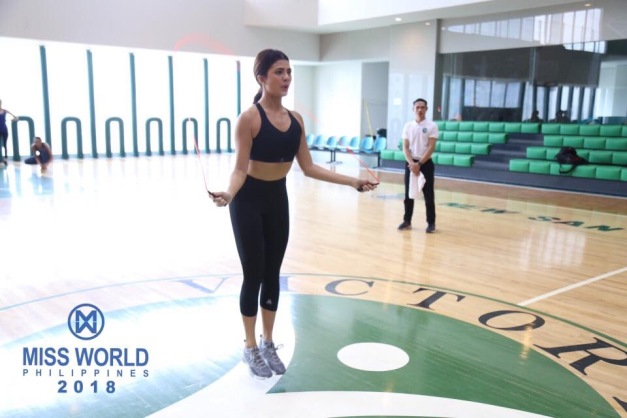 So you might ask how these ladies perform such physically strenuous tasks during the Miss World Philippines 2018 #SportsChallenge and still look beautiful?

The answer is simple. When you’re aspiring to become a Beauty Queen (or are already titleholders like Katarina Rodriguez and Kim De Guzman), you can’t afford to look less than one in any public activity.

Now it’s down to the task of the assigned photographer to make sure that he/she makes those perfect shots in motion.

Miss Manila 2015 will be crowned on Araw ng Maynila itself, June 24

Tomorrow, Wednesday, June 24, it will be a non-working holiday in the City of Manila in celebration of Araw ng Maynila. And at the PICC Plenary Hall, one of the twenty-six (26) contestants of Miss Manila 2015 will be crowned by reigning winner KC Halili in glittering rites to be hosted by Edu Manzano (with guest entertainers Sarah Geronimo, Mark Bautista, Jay-R, Rico Blanco and Ronnie Liang). And in random order now, my Top 10 selections are as follows:

In order of preference now, above are my Top 5 ladies

And as far as the Top 5 finalists are concerned, I would be happy seeing a quintet made up of Anna Karmina Conanan, Regina Malana, Patrixia Sherly Santos, Franchesca Diaz and Christine Balaguer. One of them would make an excellent successor to Miss Manila 2014 KC Halili who has completed such a mission and charity-filled reign that would be relatively hard to follow.

Good luck in the finals, ladies. May the best Manileña win! 😉

Pageant tidbit: Did you know that the full name of the candidate tagged as the ‘granddaughter’ of Gloria Diaz is Franchesca Diaz Floirendo? Talk about having the surname and married surname of our two former Miss Universe titleholders in her name. The Floirendo part was temporarily dropped for competition purposes. 🙂

Miss Manila 2015 will be crowned on Araw ng Maynila itself

Last Wednesday, the twenty-seven (27) Official Candidates of Miss Manila 2015 were presented to the Press at the Diamond Hotel. An assortment of familiar names and faces – on top of new pageant joiners – paraded in front of the media representatives in attendance. One of them will be adjudged the successor of the reigning titleholder KC Halili on June 24 at the PICC Plenary Hall.

Here now are my eight (8) favorites. Hopefully, one of them will eventually take home the crown.

My lead quartet is made up of Jillian Urbina (remember her during Bb. Pilipinas 2012?), Anna Conanan (she screened for Bb. Pilipinas 2015), Erika Diaz (tagged as the granddaughter of MU1969 Gloria Diaz) and Patrixia Sherly Santos (she has made the rounds of our favorite pageants). Following the four are deaf contender Christine Balaguer, tall Regina Maala, even taller Angelica Lopez and former Miss Sophie Crissia del Atienza.

Let’s see if these ladies will step up to the plate and bring my early forecast to a steady end result. 🙂

In the meantime, here’s a shot of Miss Manila 2014 KC Halili as taken by Edmund Chua for Fabmanilaph.

Miss Manila 2015 will be crowned on Araw ng Maynila itself

Who will be KC Halili’s successor?

Twenty-eight (28) beautiful Manilenas have been presented by Manila Mayor Joseph Estrada to the Press. One of these ladies will become the successor of Miss Manila 2014 KC Halili who will be completing a reign filled with worthy advocacies and completed missions for the city.

Miss Manila 2015 will be crowned in glittering ceremonies at the PICC Plenary Hall on Araw ng Maynila itself, June 24. Watch out for another feature on all the ladies vying for the crown. 😉 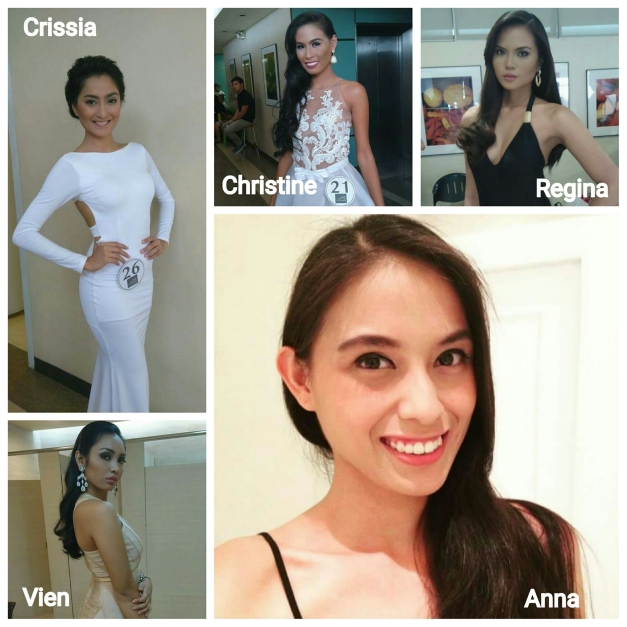 This could be a good break for her as a handler. After years of making beauty queens and models become more gorgeous for the ramp or a show, she is now looking at leveling up and, hopefully, making a winner out of one of them.

Back to the quintet, Christine Balaguer is already a familiar name and face to all of us. And Crissia del Atienza is the lady who was once named Miss Sophie Paris Philippines 2012. Regina Maala and Vien Santiago are relative pageant newbies, just as the pretty Anna Conanan who screened for Bb. Pilipinas 2015 last January.

I’d like to see how far they can take their bid in the competition. I am not automatically singling out Anna just yet, but she gives me that fair Nina Alagao vibe that could take her places with the right makeup and styling. Carissa will take care of that. 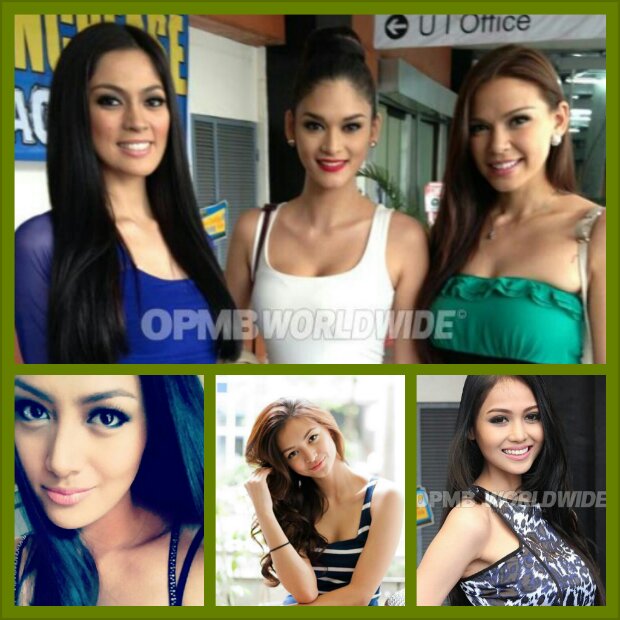 Last year, Aces & Queens was the most successful beauty camp with three of their bets (Janine Tugonon, Katrina Dimaranan and Elaine Kay Moll) in the Top 5. Kagandahang Flores had one courtesy of Nicole Schmitz, with Team JDV accounting for Ali Forbes.

And in terms of candidates, the group had the most number of O.C.s as they initially grabbed twelve (12) spots only to be trimmed down to eleven (11) after Maxine Medina was disqualified due to conflicts in endorsement contracts.

This year promises to be even better for Jonas Gaffud and his pack of pageant-training experts. He knows that arch-rival Rodgil Flores is pulling out all stops to wrest the top crown from his clutch and won’t take things sitting down. The pressure of the collective (and consecutive) achievements from 2010-2012 may be tremendous, but he is ready to stretch his long streak regardless of the odds.

More than twelve will screen from Aces & Queens starting today till Thursday. But from among the dozen pictured above, I took the liberty of dividing them into two teams. Team A is obviously my own take on the stronger beauties, and they are made up of Pia Wurtzbach, Theresa Fenger, Kylie Verzosa, Shan Apuad, Ariella Arida and Cindy Miranda. I see no rejects here, unless something in conflict with BPCI arises somewhere. These ladies are sure to set the Binibini stage on fire with their gorgeous faces and polished pageant skills. In fact, at least two of them could easily make this year’s circle of winners. Which two? Possibly, Pia and Kylie. Perhaps, Shan and Theresa. Could be Ara and Cindy. Whatever the combo is, their beauty camp comes out the most victorious.

Team B, on the other hand, is not (and will never be) a set of pushover contenders. They may not be the most facially striking, but their individual strengths and buffed styling/projection cannot be sneered at. Consider half-Korean Cassandra Naidas (the group’s tallest at 5’10”) and vavavoom charmer Jacqueline Mayoralgo as possible spoilers who could easily steal the limelight from the favorites in a breeze. And then there are shapely Mariel de Leon and sweet slim-waisted Kate Enriquez who can also give the hyped joiners a run for their money. Honestly, Crissia del Atienza and Yvette Chantal Mildenberger are the relative weak links here, but it would be highly premature to put them down this early based solely on available pics online.

So there. The screenings of Bb. Pilipinas 2013 are sure to give a major headache for the committee in-charge of evaluating the girls. I can’t say that I envy their task, but how I would love to take part in the selection process.

In the end, Filipino pageant followers will benefit the most. The 50th Anniversary of our well-loved national pageant will certainly give us the most exciting and breathtaking rollercoaster of a ride en route to the coronation night tentatively scheduled mid-April. 😉

P.S. And I haven’t included one ‘Young’ lady in the group yet! 😉