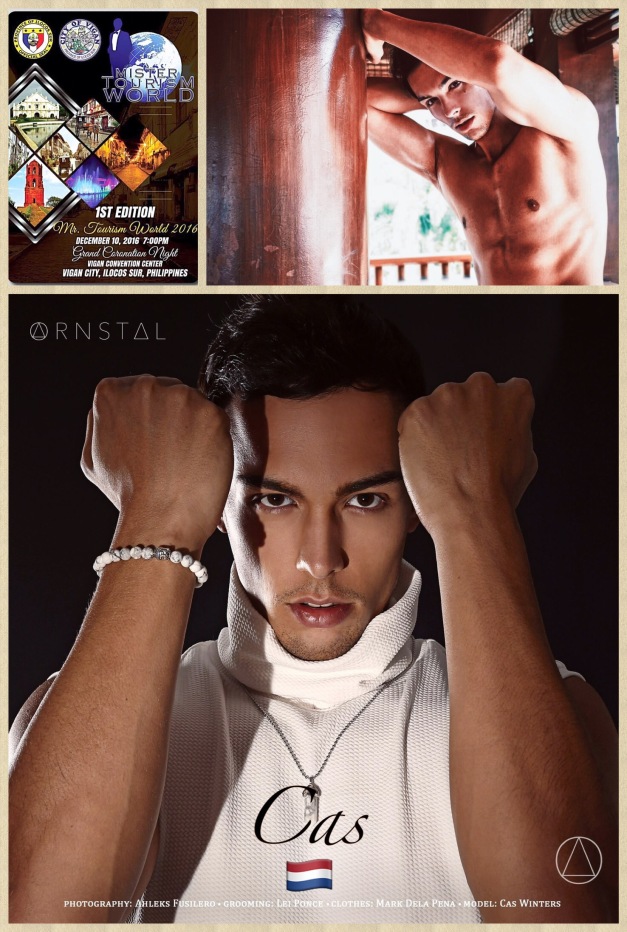 You’ve seen him compete in Mister International 2015 here in Manila and, most recently, Mister Universal Ambassador 2016 in Bali/Surabaya, Indonesia last September. Now, Cas Winters has become sharper and more prepared for a 3rd attempt in an international male pageant. Next month, he will represent the Netherlands in the 1st Edition of Mister Tourism World which will happen in Vigan, Ilocos Sur from December 3-10.

Cas has been a Manila resident for several months now. It’s no secret that his girlfriend is Bb. Pilipinas 2016 Official Candidate Christianne Ramos who is responsible for “Filipinizing” him. Read his self-made 411 now and tell me if he is genuinely a Pinoy at heart inspite of having a Dutch/Indonesian mix. 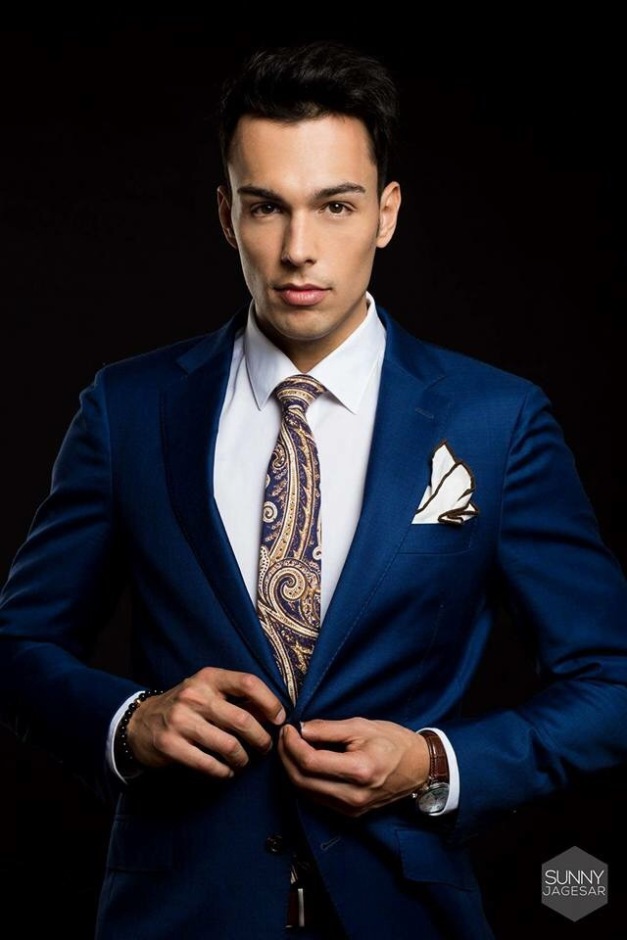 “My name is Cas Winters, 26 years old from Den Haag, the Netherlands. The name Cas, which was given to me by my Indonesian mother, is derived from old Scandinavian mythology which means “guardian of the treasures”. I am born and raised in a multicultural, yet closed-knit family of five. My Dutch father is six-foot-eight, hence my statuesque height of six-foot-four. Though my tallness may intimidate people most of the time, I am an easy going person who enjoys meeting new people and making good conversations. What piques my interests are business, economics, art, and traveling–which fuels my drive for the spontaneous adventures and ignites my passions in life.

As to best describe myself, I am a man of the world. This is because I have lived in many different cities and countries including where I currently live, (and so far my favorite) Manila, Philippines. Though I love basking in the beautiful and iconic sceneries of the places I visit, I enjoy immersing myself in different cultures the most. Having parents of two very different cultures made me someone that grew a penchant for the uniqueness and diversity of the world. Moreover, I also have an extreme fondness of trying out different cuisines and recreating them in my own kitchen. My favorite so far is the Filipino dish called Adobo, which I usually eat served with some maalat na itlog (salted egg) and sinangag (garlic rice). Because of my love for traveling and food, I aspire to document my world adventures someday through video blogging on social media. This is also to promote my lifelong advocacy of establishing tourism as a platform of peace and sustainable development.”

Cas feels so much at home living here in Manila. If that will work to his advantage in Mister Tourism World, nobody can tell. But one thing is for sure. He will be the tallest delegate, aside from having the genuine excitement to plunge back into the pageant scene and show to everyone that he deserves to be recognized for his real worth.

I wish you all the best in Mister Tourism World, Cas Winters!

Jewel of the Philippines 2016 Screening 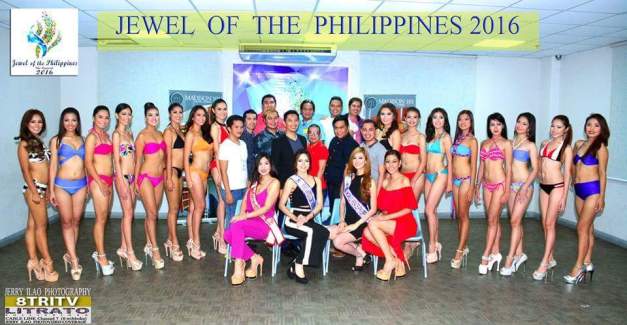 The accepted ladies with the members of the screening panel

The screening panel included Christianne Ramos (in purple), Jean Tumang (in red), Jeslyn Santos (in black with gray blazer) and Anabel Tia (in black spaghetti strap). Domz Ramos of Pegarro Swim (2nd from right) was also part of the group

Last Saturday night, Jewel of the Philippines 2016 – the inaugural edition – had its screening at the Madison 101 Hotel & Tower in Quezon City. Beauty Queens and Binibinis – such as Miss United Continent Philippines 2015 Anabel Tia, Miss Tourism Philippines-Model of the Universe 2016 Jean Tumang, Miss World Peace Philippines 2015 (and Bb. Pilipinas 2016 candidate) Jeslyn Santos and Binibini 40 of Batch 2016 Christianne Ramos – joined the panel along with Domz Ramos of Pegarro Swim among others.

Pageant owner John dela Vega was visibly happy with the healthy turnout of ladies as he was already able to assemble at least half of the Official Candidates who will vie for the crowns at stake come August 10 at the Tanghalang Pasigueno. Winners will represent the country in Miss World Peace, Miss Bikini Universe and Charity Queen International.

Let’s follow this beauty competition and see who will shine even more once the real beauty battle begins. 😉

Make that Four Binibinis of JDV in Bb. Pilipinas 2016

Binibini 6 Candy del Castillo, Binibini 10 Jeslyn Santos, Binibini 40 Christianne Ramos and, now, Binibini 20 Geisha Naganuma. This beautiful quartet makes up the Team JDV bets of John dela Vega in Bb. Pilipinas 2016. The road to completing the four was not the smoothest, but the important thing is that they’re in for the fight.

We all know that only Jeslyn and Christianne qualified at first. But when height issues became hot topic and caused the exit of five previously-announced contenders, Candy entered the picture. And just recently, the controversial disqualification of original Binibini 20 Kim Ross delos Santos due to sexy photos led to the accommodation of Geisha as the latest.

There will always be strength in numbers. And these four ladies will surely uphold the banner of their camp with such pride. After all, their group was assembled the hard way. The rewards are so much sweeter now.

Now this is just a small trivia about Binibini 6 Candy del Castillo. JDV himself shared with your blogger that this Bocaue native is the big sister of a 2-month old baby after her 40 year-old gave birth to their youngest sibling. 😉

Sunday Specials: 2 each for JDV, R-L’s Angels and Galatea in Bb. Pilipinas 2016

These six beauties come from the smaller pageant training groups for Bb. Pilipinas 2016

We are already familiar with them – the four individuals who have formed their own smaller camps to train and polish ladies for Bb. Pilipinas 2016. And mind you, it really takes a lot of effort and sacrifices to even get through the tough screening of the nationals. So I give my well-deserved kudos for entering two (2) Official Candidates each to:

John Dela Vega of Team JDV who has Jeslyn Santos and Christianne Ramos making it.

RL de Leon Lacanienta of R-L’s Angels for getting in Angelique de Leon and Daziella Gange.

Truth be told, each one of them can give really good fights in the competition despite being the Davids to the Goliaths of Aces & Queens and KF. During last Friday’s screenings, in fact, Angelique de Leon (for her wit and joie-de-vivre), Jeslyn Santos (for her much improved version) and Jennyline Carla Malpaya (for her very exotic features and color) registered very well among members of the panel.

Also, you just cannot simply count out Daziella Gange who is Miss Heritage Pilipinas 2015 (she represented us and placed 1st Runner-Up during Miss Heritage in South Africa), Christianne Ramos who is Miss Charity Queen Philippines 2015 (she represented us during Miss Charity Queen International 2015 in Taiwan) and Leonalyn dela Cruz, a Professional Model who has vastly gained a lot of experience on the ramp to strut her way more confidently.

Who will shine bright? JDV, R-L or Galatea? 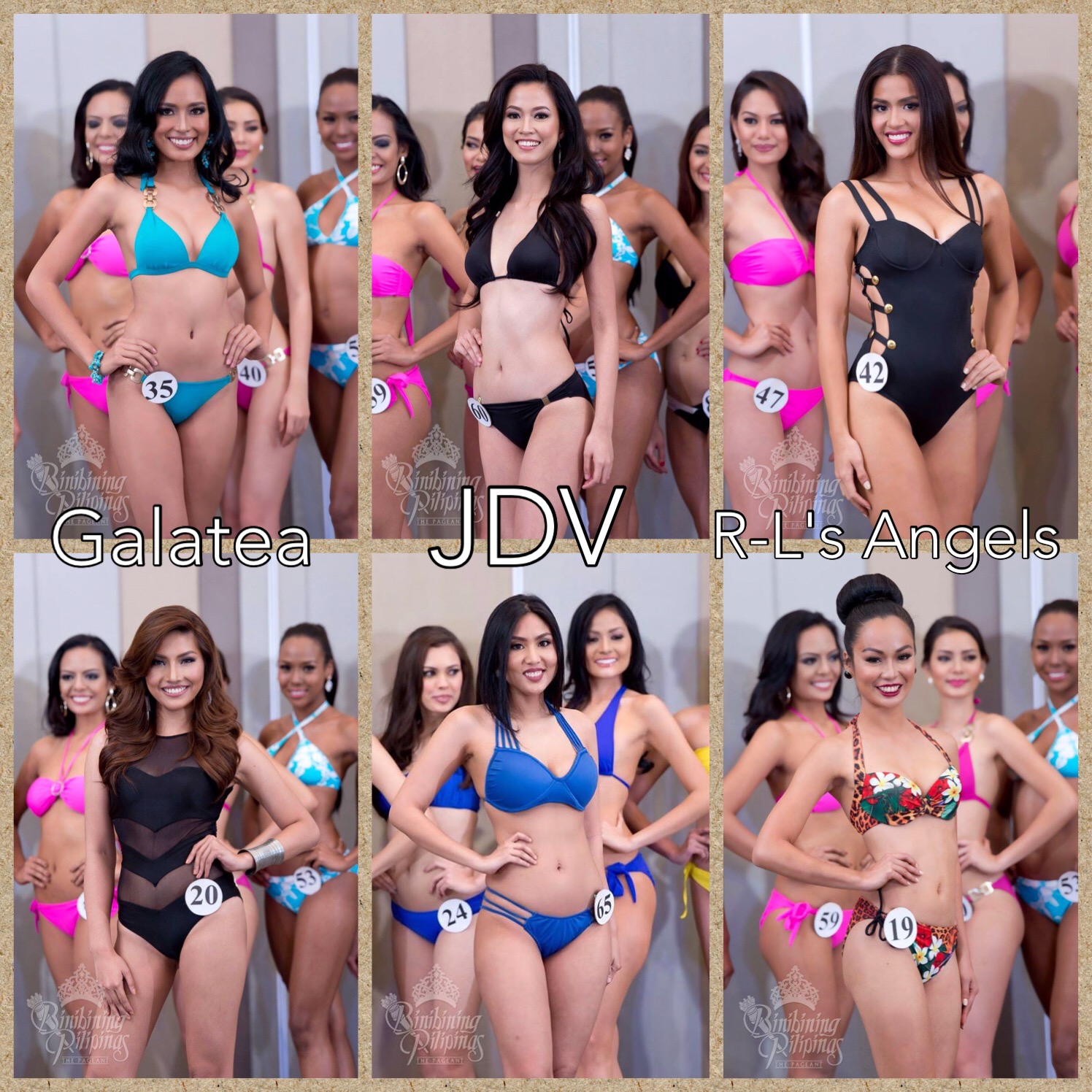 Who do you see shining among them?

And then there’s Christianne Ramos

Christianne Ramos is another Team JDV bet for Bb. Pilipinas 2016, I was told

You will remember Christianne “Ysh” Ramos as the Philippine representative to the Charity Queen International Pageant 2015 held in Kaoshiung, Taiwan last year. She was handpicked by franchise holder John dela Vega for that mission. And the international experience really served her well. She is now more confident of herself and was able to prove that she can stand side-by-side the other foreign delegates in the competition. She was even voted friendliest by all the candidates.

And this year, Ysh is ready to face another challenge in the nationals. She is said to be one of the entries of Team JDV for Bb. Pilipinas 2016. This 5’7″ Ateneo de Manila graduate with a degree in Interdisciplinary Studies – who was once Blue Eagles Futsal Team Captain of the university – is ready to mix it up with the best of the best applicants to get one of the spots among the Official Candidates.

How far will Christianne Ramos bring her bid? We shall soon find out. The screenings will begin February 12 and she is prepping herself up very well.

John dela Vega, who holds the franchise for the said pageant, is optimistic about Christianne’s chances. The girl is no pageant newbie as she has already served the title of Miss World University Philippines in the past.

Our bet will fly to Kaoshiung this coming Sunday, November 15, just in time for the start of the pre-pageant activities on Monday.

At the rate the candidates of Miss Philippines Earth 2011 are being eliminated, the finals night on June 5 better be good with only a handful left to fight for the crown. During the Cocktail Wear competition held at the Carlos P. Romulo Theater of RCBC Tower in Makati City, ten more (lonely) ladies were axed and they are:

This is a very surprising set of eliminated ladies because Miss Mun. of Milaor, Jaine Hidalgo, is part of it. And I thought she’s one of the favorites to take it all the way. 😦

Only twenty girls left and the most cruel cut is about to happen this coming Saturday, May 21, during the Talent & Cultural Costume Competition at Thunderbird Resorts, which means that the last names to be booted out won’t see the light of coronation night when they are this close to making it.

Question is….which ten ladies will battle it out in the end? Three names will surely be there (Misses Puerto Princesa City, Cebu City and Fil USA East Coast), but the seven other competitors are still up in the air.