Sofia Depassier: Will she do a Cecilia Bolocco in the 71st Miss Universe?

One of the loveliest faces in the 71st Miss Universe belongs to Miss Universe Chile 2022 Sofia Depassier whose impossibly gorgeous face deserves a second and third look everytime new photos of her surface online. And with the South American country hungry for another victory in the competition, this Goddess will pull out all the stops to win the Mouawad crown. After all, Chile’s first and only MU title so far happened back in 1987 with Cecilia Bolocco. That was around 34 years ago.

High time for another #1 finish for Chile, if you ask me. 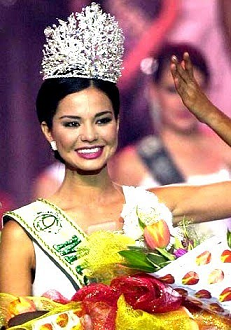 Dania during her coronation

There are a few good reasons why this lovely lady is the subject of our Throwback Thursday post. For starters, Miss Earth 2014 is going to be crowned two days from now. Second, Dania Patricia Prince Méndez is the only beauty queens from Honduras that has ever captured a major international beauty crown. And third, the late Miss World Honduras María José Alvarado Muñoz has been in the news for the past two weeks. Hence, the connections fit somehow.

In my eyes, this Latina with a British-Honduran mix is comparable to Miss Universe 1987 Cecilia Bolocco, pageant wise. They both arrived in their respective beauty contest venues claiming the status of top favorite from beginning to end. They both exuded the same poised and elegant stance that made them effortlessly stand out among all the candidates.

Dania in a not-so-recent family picture with her husband Frank Fuentes and two daughters.

And lastly, they conquered their respective finals night with a presence so regal that the strong presence never escaped the eyes of the board of judges.

Dania, having joined both Miss Universe (1998) and Miss Earth, gave a very clear comparison of both competitions according to a newspaper interview she gave to Manila Standard back in 2004.

“Beauty, body, and brains of the candidates are given a lot of emphasis in Miss Universe and it is more commercialized. On the other hand, Miss Earth is cause-oriented. If you can still recall, a lot of beautiful and popular candidates from countries that usually win in international pageants surprisingly didn’t make it in the semifinal round of Miss Earth last year. The judges, most likely, were looking for the ‘sincerity factor’ rather than the ‘X-factor’ in a candidate, which perhaps they saw in me.”

So with this in mind, will the new Miss Earth be more aligned with the profile of reigning winner Alyz Henrich or someone like Dania? It all remains to be seen, but I want to be surprised come Saturday night. I want Miss Earth 2014 to be a more refreshing representation of its causes and objectives. 😉 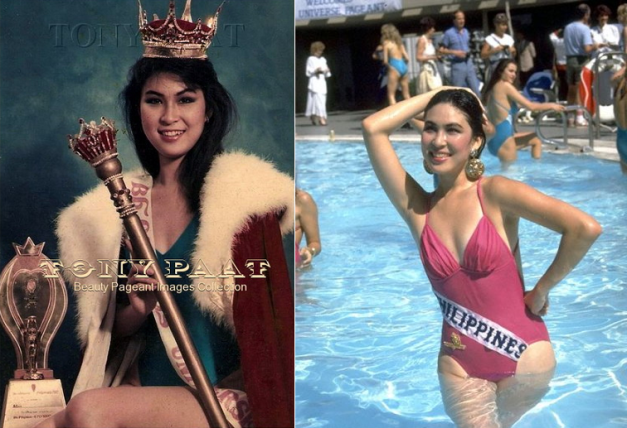 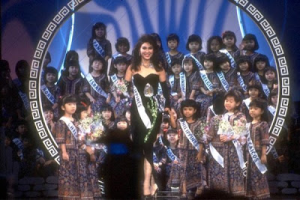 You don’t easily forget a Bb. Pilipinas Universe who placed in the Miss Universe Pageant. Such is the case of our 1987 representative Geraldine Edith “Pebbles” Villaruz Asis who made Top 10 in such a competitive edition held in Singapore. Fact is, she almost made it to Top 5, trailing the 5th placer by just the slimmest of points (0.048) and finishing 6th overall in the end.

Pebbles is one of those Miss Philippines who could have joined in two Bb. Pilipinas finals (1987 and 1988) and still get the top crown. You see, these are the two consecutive years when Miss Universe was held in Asian cities (Singapore and Taipei). The talk never ceased about how things would have turned out if she was sent in 1988 instead, when four (4) Asian delegates entered the Top 5. Of course, everything is now beauty contest history and we can only look back and reminisce. 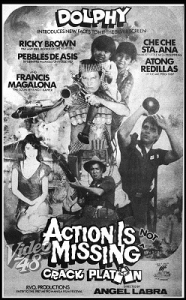 Back home, Pebbles finished all responsibilities as a Bb. Pilipinas titleholder after placing in the Lion City. Immediately following her reign, she continued with modeling before entering showbiz for a while. She was actually signed up to be the leading lady of the late Comedy King Dolphy in one of his movies (‘Action is Missing, Crack Platoon).

It was during the years of settling down that she realized her life to be far from the bed of roses she imagined it to be. Her existence paralleled scenes straight out of a teleserye that would put to shame some of the heavy dramas we get to watch every night on the small screen.

Pebbles married into a rich family down south. But as she stated herself, “sadly, it is the toughest I’ve been through in my life legally, socially, psychologically, physically, mentally…”

I will not go into specific details about the rollercoaster ride she found herself being part of. The drops far outnumbered the few rises in between. But all throughout, she found solace in bringing into this world two precious children – Gabby and Sam – who kept her in good stead. They also became her inspirations when it was finally time to heal and move on.

Pebbles was able to pick up the pieces of a life that was almost too unbearable an existence for anyone to undergo. Alongside the various businesses (lodging, aquaculture, lending) of the family, part of her inheritance was a 50 year-old ancestral house in Capiz which she is now planning to convert into a hotel. Admitting that she could afford to live like a queen and not worry about financial resources, she looks back to the traits of hardwork and dedication taught by her late father. She spends each day busy with all the demands of an entrepreneur’s daily existence.

Pebbles and her 11 year-old daughter Sam

I got off chatting with our Bb. Pilipinas Universe 1987 getting so much more information than what I initially bargained for. But it’s one of those chats that left me more than convinced that I decided to go into pageant blogging. These Senti Sunday Specials are gradually shaping up into the kind of features that should hopefully rekindle my ties with our past national beauty queens on a regular basis from hereon now. 🙂

Coming from Miss Universe placements back in 1984 and 1987, Ilma Julieta Urrutia and Laurie Simpson went on to win Miss International in the same years, respectively.

It no longer comes as a complete surprise that some Miss Universe placers went on to achieve greater victories in other beauty pageants.

Consider Ilma Julieta Urrutia Chang of Guatemala first. She is the only Big 4 pageant winner from the Central American country to date. After landing in Miami Beach for Miss Universe 1984, she was easily noticed and became one of the running favorites going into the finals. True enough, she found herself being called to join the Top 10. And while her climb to the Top 5 never materialized, she was still considered a very competitive beauty queen such that country organizers decided to field her once more. And at the Kanagawa Prefectural Civic Hall in Yokohama, Japan, she outlasted the competition and defeated early picks from Venezuela and Sweden (who became her runners-up) to become Miss International 1984. 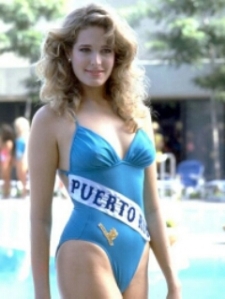 There is also Laurie Tamara Simpson of Puerto Rico. Her first stop was Singapore for Miss Universe 1987. In the Lion City, she made heads turn and was constantly in the short-list of many pageant followers. And during the Coronation Night, she was initially part of the Top 10. From there, she performed well enough to snatch the fifth and final Top 5 spot (from 6th placer Geraldine Asis of the Philippines). Eventual winner Cecilia Bolocco of Chile was a winner right from the start, though, and she got the 4th Runner-Up honor for her efforts.

But when it was time to conquer Tokyo, this Puerto Rican became a strong front-runner. At Nihon Seinen-Kan, she was elected Miss International 1987, big notches better than her MU achievement.

There are still other ladies who went the same route as Ilma and Laurie in the major beauty contests. But since Miss International 2014 will be starting soon, I opted to focus on them as the Throwback Thursday feature of the week. 😉