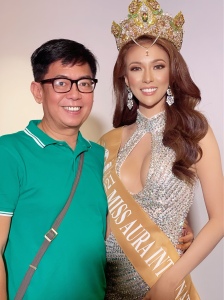 Fresh from a successful pageant stint in Antalya, Turkey, Alexandra Faith Garcia came home with the crown of Miss Aura International on her head. She happily met up with several invited friends from the pageant media at the Victoria Sports Tower in EDSA Timog where answered questions left and right – from light to the more serious ones. She shed tears once or twice (courtesy of this blogger) but all in the spirit of joy and fulfillment.

In the said press conference, close friends of Faith also graced the event – especially Team Aura that stood by her in the journey and her loving KF for Crown. for Country. family headed by Rodin Gilbert B.flores. Designer Cathy-Mora Capistrano also showed her support.

This may be the final chapter in her colorful pageant life, but not in furthering her agriculture-related advocacy which she plans to fully establish in her home of Olongapo City.

From all of us at normannorman.com Pageantry Normsantry Norms, Congratulations once more❣️

Faith with Rodgil Flores of KF

She has made the rounds of Miss World Philippines 2017 and Miss Earth Philippines 2018. She learned her lessons from both attempts and prepared well for her next pageant foray. This time, Noelle Fuentes Uy-Tuazon is upping the ante with her Miss Universe Guam 2018 candidacy. If she wins the title come August 15, then a third Filipina will form the roster of candidates for Miss Universe 2018 (our very own Catriona Gray and Angeline Flor Pua of Belgium are the first two).

I tracked down Noelle for an exclusive one-on-one. Here goes:

Q: What led you to joining Miss Universe Guam 2018?

”To be honest, this was very much last minute and a surprise to me as well. After Miss Earth Philippines, I had every intention of exploring the political field before pursuing my masters. However, Tito Rodgil Flores, Georgette Garrido, Designer Cathy Mora-Capistrano, Mommy Erica (MUA of KF) and the KF camp were trying to convince me to join another pageant due to the year’s worth of training that I’ve endured. Sayang daw ready na daw ako. So initially I said I would think about it – perhaps Miss Scuba Philippines, since my cousin – Rufos Tapas owner Paul Reyes was encouraging me to join right after coronation. Honestly I was about to go on a trip to Guam with my mom to visit family. They had lots of sales prospects but then I had too many projects that I was doing, like the bugna it in tangalan on coral transplanting rehabilitation of my uncles. Long story short, Sir Migz and my mom were talking about Miss USA that they jokingly said ‘why haven’t you tried out in the U.S. since you’re an American citizen and truly grew up there?’. I said it’s already too much. I need to go back to my field, plus it usually starts January so I’m old and I need to retire from pageantry. But since my mom wanted to fly badly to Guam for vacation, Sir Migz jokingly said why not Miss Guam? Later that week I got a message of a poster of Miss Universe Guam 2018 search. I was hesitant, thinking that I might have already missed the deadline for submission. My mom said why not shoot them an email it wouldn’t hurt, plus I used to live in Guam for a couple years as a child (back when there was Game Works) and I do owe Guam my U.S. citizenship. So one email led to another and then I applied and the organization asked if I could fly ASAP so I completed training one-on-one with Tito Rodgil with a week’s worth of prep time secretly because we really didn’t know what to expect. Then next thing I knew I was on a plane with 4 luggages accompanied by my mom.”

Q: Would you consider it a big vindication of sorts if you win the Miss Universe Guam 2018 crown?

“I wouldn’t say it’s a big vindication because honestly, pageantry wasn’t something I expected at all back then being a Scientist and all. If I would be fortunate enough to win, it would just truly be an achievement and a dream come true for both myself and my mom as well as the KF camp and my family/friends from everywhere. I’ve lived in so many places that it’s hard to single out people. If I win, I’m truly looking forward to using the platform for positive change towards the betterment of society as idealistic as that sounds and most especially promoting Guam on a bigger scale. I’ve always had roots here since 6 months old. My mom would fly me back and forth. She even worked as a beauty consultant back then here in Guam. I love the ocean and I am able to appreciate Guam even more now as an adult as opposed to when I was a child. I see a lot of future here.

Q: What is your take on other countries selecting ladies with Filipino roots as their representative to big international pageants?

“I have mixed emotions on ladies with Pinoy roots representing other countries in international pageants. I didn’t take pageants seriously back in college. I never thought about the more complex aspects, but after having done two national pageants, I feel that everyone has a right to join as long as they meet the qualifications. Most importantly, I believe that if a candidate has the drive and intrinsic motivation coupled with passion they should be given the opportunity. At the end of the day, we are all scientifically under one species – Homo sapiens – aka humans so it’s just a matter of perspective. Lastly, everything is relative. As long as one follows the rules, meets the requirements and tries to do their best then all the more power to them!“

65th Miss Universe | Which were and who wore the Best Ternos? 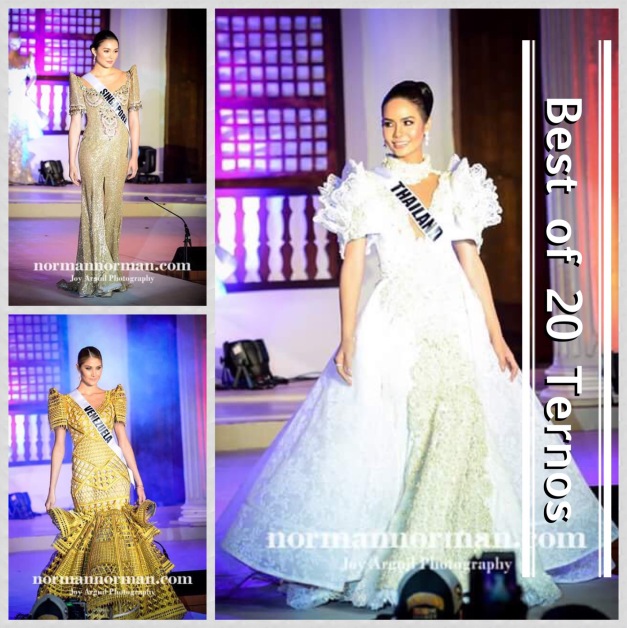 The three best Ternos in my opinion were worn by Thailand, Singapore and Venezuela 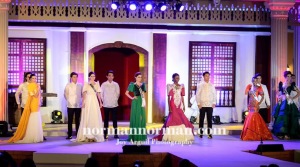 When the 65th Miss Universe Cultural Terno Show unfolded last night from Calle Crisologo all the way to Plaza Burgos in Vigan City, all eyes were not just on the twenty (20) lovely contestants who paraded around the historic venue in the country’s most elegant traditional attires. The different creations worn were also scrutinized, with the best ones praised accordingly and the not-so-awe-inspiring outputs set aside for plain mention. 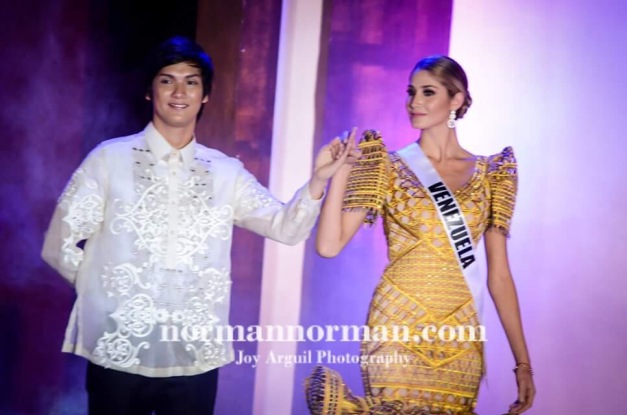 Miss Thailand Chalita Suansane wore what I consider to be the best for the night. Rian Fernandez created a flowy number that was carried by the wearer in such a divine manner. There is at once an ethereal quality that melds with the ballgown-like construction into a number allowing a very dignified and respectful stiltedness in the overall effect.

Miss Singpore Cheryl Chou wore a Jearson Demavivas creation that is simple in cut, well-executed and fits the wearer like hand to a glove. Her oriental features added more sparkle to the finely-sewn embellishments to the body of the gown. The results speak in loud volumes.

And finally, Miss Venezuela Mariam Habach was assigned to wear the Frederick Verches terno that could have turned disastrous in the hands of a less meticulous designer. The gilded design asks for a fine-tuning of all elements that go into the serpentina cut and showed a bottom-heavy effect which still allowed movements of the material with ease.

Now here are the rest: 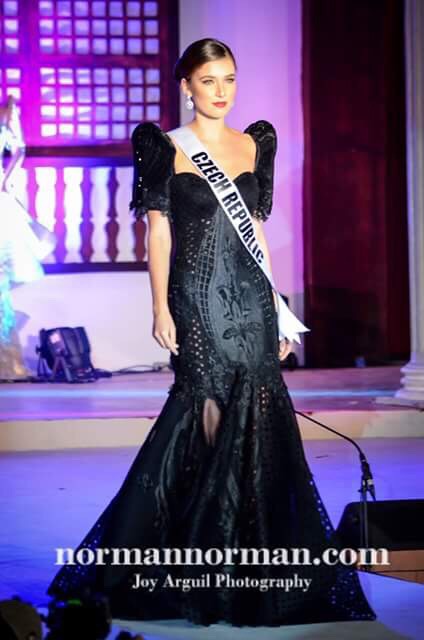 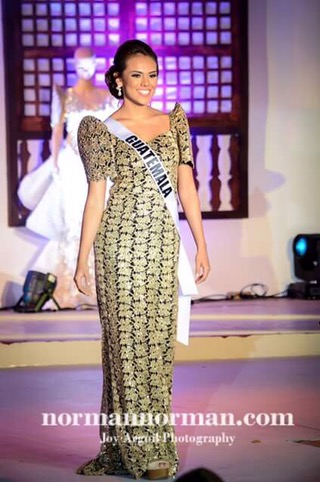 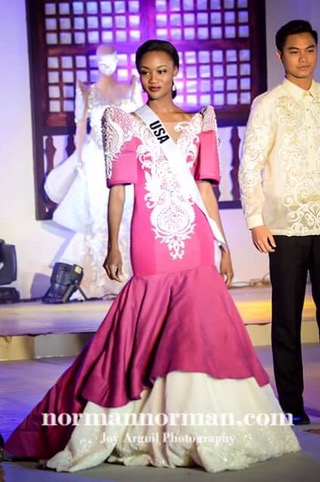 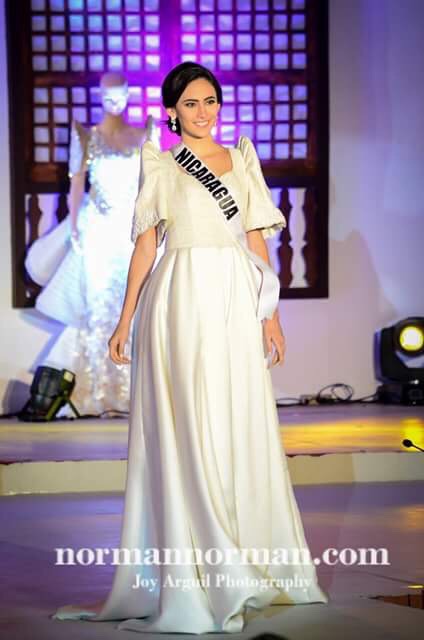