Prior to Bb. Pilipinas 2014, Binibini 28 Carla Jenina Lizardo was already working as a news presenter for PTV4. So when she took a temporary leave from the network, she never burned bridges and knew that there was still a full-time job waiting for her in case the pageant yielded good results for someone else. The nice thing is that upon her return on TV, a new magazine type of show was already waiting for her.

Titled “Personage”, the program will see her interviewing different personalities each week. Watch the premiere episode below which aired last night.

“Personage” airs every Thursday night at 7:00PM on PTV4. Next week, she will have MU2010 4th RunnerUp Venus Raj and Miss Tourism International 2013 Angeli Dione Gomez on the hot seat. 🙂 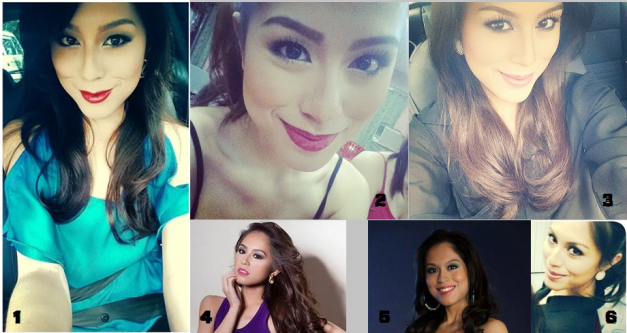 Before anything else, focus on the six (6) images of Binibini 28 Carla Jenina Lizardo in the photo grid above. Which look do you like the best for her? I’m actually leaning on #3 because it shows her best angle, aside from dramatically softening her features.

More than just taking selfies while stuck in traffic, Carla loves to talk and socialize. This I discovered during my two encounters with the TV news presenter-cum-radio DJ. Actually, she appears lovelier in person and is effectively larger than life in terms of overall presence. She has a glowing vibe that starts charming people the minute she flashes her engaging smile. Best of all, she is the type of conversationalist who is just as good as a listener. And methinks she will be able to handle the formal pre-pageant functions of Bb. Pilipinas 2014 with such ease and sophistication.

How about the competition itself? My gut-feel is that she can draw positive impressions considering that she registers best during interpersonal plays. She is aware that some of her fellow candidates are definitely ahead in terms of hype and popularity. But a level-headed mind keeps her in good stead. Should she spring a surprise somewhere, I won’t be taken aback anymore. 😉

Carla Lizardo is back in harness!

Bb. Pilipinas 2014 is Carla Jenina Lizardo’s 3rd national pageant. And from all the learnings she gathered from Mutya ng Pilipinas 2011 and Miss World Philippines 2012, she certainly saved the best for last. And this is where she will try to pour out everything to the max.

But backtracking a bit, this PTV4 news anchor and radio discjockey (she is known as DJ Cali) was actually disappointed when she was not called to the Top 40 during the final screening. Thinking that it was the end of her BBP journey, she took the elimination with positivity instead of entertaining ill thoughts. Little did she know that she will be recalled after 24 hours to join the other Official Candidates.

The Aces & Queens bet is now back in harness. She has quickly regained the momentum temporarily pushed aside. And when your blogger asked her to do the Question & Answer, there was no hesitation. Read on.

1.What are the advantages/disadvantages of an A&Q-trained aspirant like you joining a tough beauty competition like Bb. Pilipinas?

“Being part of A&Q (or any other camp for that matter) does have many advantages. I get a support system, great mentors and wonderful sisters all at once. It’s nice to have a clear idea of what you’re getting into, and to already have friends as the pageant starts. We all know that Bb. Pilipinas is the most prestigious pageant in the country, so the all-around preparation that a camp offers plays a big role in the candidate’s performance. As for the disadvantages, I can only think of one – people seem to have their preconceived notions that aren’t necessarily true about each camp. Like, oh this group is mayabang, etc. so the whole group gets generalized and this leads to negative (and usually mean!) comments online. Good thing my camp mothers have already advised me to stay away from forums while the pageant is ongoing! See? Being in a camp does have a lot of perks. Hehe.” ☺

2. How are you preparing yourself for all the pre-pageant activities where the top favorites and hyped contenders are always given the spotlight? How do you plan to stand out?

” I guess a hyped candidate will have an easier time building up her confidence – all she has to do is read all her fan comments! As for me, I really try to avoid paying attention to hype because I know I’m usually not on those “top candidate” lists we find online. I know that there are two things that can make me stand out though – my skin and my communication skills. I do know that having really pale skin is seen to be a disadvantage in the present pageant scene where Filipina beauties are given the spotlight… but the truth is, I hope to change the perception that only darker skinned women can be considered a Filipina beauty. I guess people would be surprised that I am 100% Filipina, I just happened to be born light-skinned and I think that the diversity of the beauty of the women in our country is something that should be appreciated. As for my communication skills… I do talk for a living so I guess it’s pretty self-explanatory.”☺

3. Do you believe that good luck (or the lack of it) plays an important role in winning a pageant?

“Definitely! Just imagine – 40 beautiful and talented girls who are giving their all to win one of the four coveted crowns! We can’t deny that aside from the individual efforts of the girls, there are so many different things to consider – the judges, the beauty trend, and the final performance of the girls during coronation night that may be affected by many external factors. Fate works in funny ways. . I’ve always believed that if it’s meant to be, it will be as long as you do your best and put your trust in God who will always know best.”

4. Having worked in front of the camera for PTV4, does this give you that extra kick when it comes to PR and the like compared to the others?

“Working with PTV has definitely helped me a lot when it comes to PR, since I was given the opportunity to meet and interview people from all walks of life – from politicians, inventors, athletes, government personnel and NGO presidents. I do think that being exposed to so many different personalities has made me a much more confident person, and I definitely think that it is something that I can use to stand out from the other candidates.” 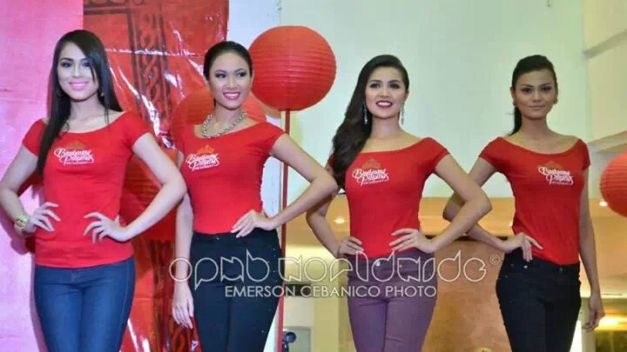 So what’s your tentative verdict on Carla?

I know for sure that she deserves to become an Official Candidate. And I truly believe that her communication skills stand out quite well. Plus, having seen and chatted with her in person twice in the past (remember the first time we met at Izakaya in Greenbelt, Carla?) 😉 , I can tell you that she looks and projects so well that some of her pictures online pale in comparison to the lady who was in front of me.

Will she go far in the competition? I don’t see why not. After all, the judges won’t key in scores based on photographs. Based on her personaI merits, I won’t think twice about giving two thumbs up for now. 😉

Another pageant, another poll.

Starting today till a few days before Finals Night, you can vote for your Top Picks among the Official Candidates of Bb. Pilipinas 2014. From time to time, updates on the running results will be posted to give you an idea on who’s leading and who’s lagging behind.

By the way, this post will be sticky just for today. Afterwards, you can cast your choices in the widget on the right.

P.S. The names and photos of Diane Querrer and Sherlien Dass are no longer above after being replaced by Aiza Faeldonia and Carla Lizardo.

If I had the final say

I would also come up with forty (40) Official Candidates (as reported) for Bb. Pilipinas 2014. Truthfully, it was difficult easing out a few more of the remaining ladies in the Top 61. But in random grids, my personal choices are: 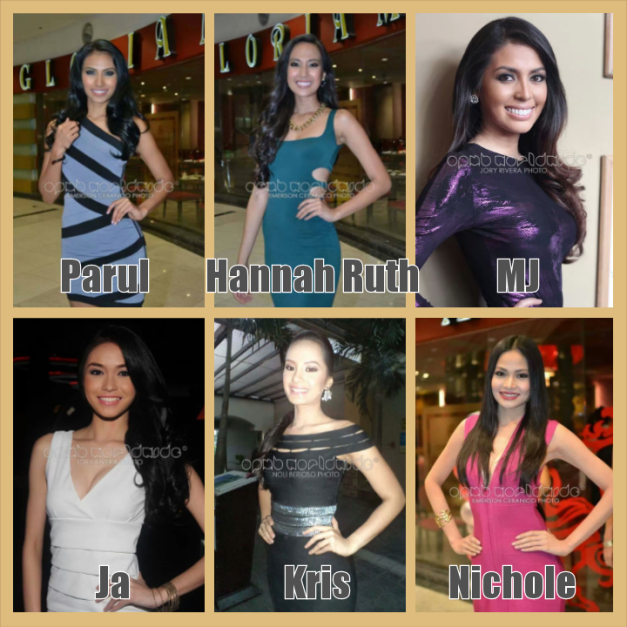 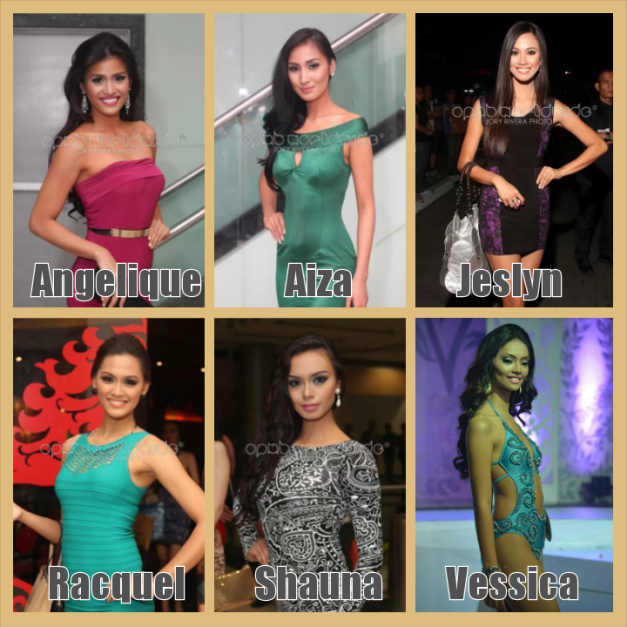 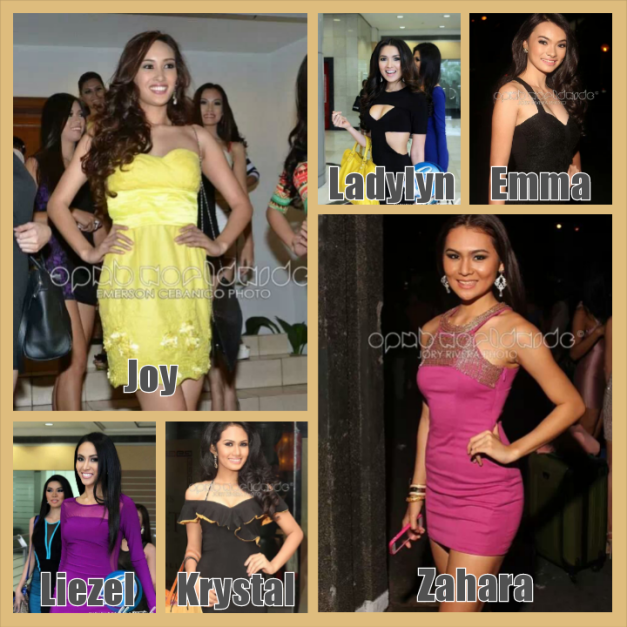 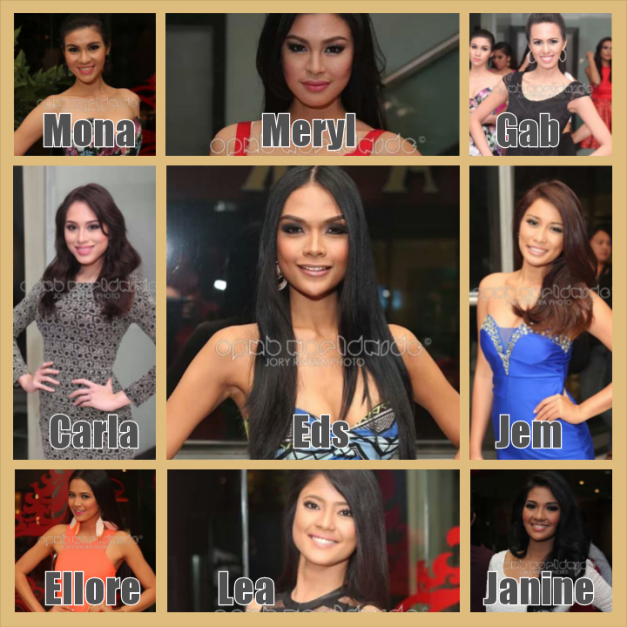 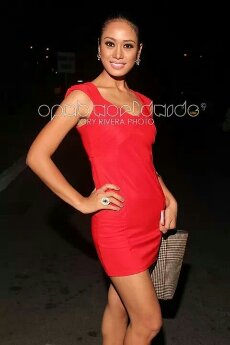