When Gillian Eliza Colcol blew the candles on her 25th birthday cake last Saturday, March 25, I have a feeling that the silent wish she uttered prior was to finally become a Binibini and become the chosen one to fill in the spot left void when Mae Lanie Chan was disqualified. Indeed, in less than two days after, her wish was granted – albeit belated. She now sports pin number 36 in the roster of Official Candidates for Bb. Pilipinas 2017.

I immediately got into chatting with Gillian after Rodgil Flores of Kagandahang Flores informed me of the good news and threw in questions that she willingly answered.

1) How does it really feel like to be the replacement Binibini – that is #Binibini36 – among all the candidates this year? Don’t you feel short-changed for coming in late in the game?

It’s an honor for me to be part of the official 40 of Binibining Pilipinas, regardless of how I got in. Yes, I came in late but I refuse to look at it as a disadvantage. This is my first pageant and I was already feeling lucky to have been part of the Top 55. And after getting eliminated last February 28, it stirred up a desire to try out again and win a title, and not just joining for the sake of experience.

Now that I am the new Binibini 36, I have been given an opportunity to finish what I’ve started. Plus, I’ve been told that people are talking about me, which I think is an advantage!

2) In just a little over a month from now, a new set of Bb. Pilipinas titleholders will be crowned. Why should you be one of them when everyone else has already gotten a lot of lead time in the competition?

I should be a Binibining Pilipinas titleholder because I know that I can represent my country well in an international pageant and I will work very hard for it! I have so much love for the Filipino people that I want to uplift their spirits, make them proud, and inspire them to pursue goodness in our society.

3. How do you plan to make the most of the remaining weeks of Bb Pilipinas?

As the new Binibini 36, I will cherish each moment and make each day count by putting my best foot forward to win the crowd, the judges and hopefully a Binibining Pilipinas title.

One can definitely feel the excitement brewing inside Gillian Eliza Colcol. She is more than ready to battle it out with the 39 other Binibinis. And mind you, she is not looking at herself as a filler, but a potential winner.

She is Gillian Eliza Colcol, your new #Binibini36 of Bb. Pilipinas 2017 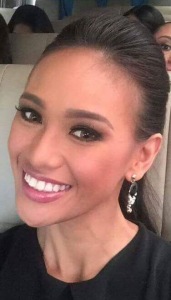 Gillian is 25 years old and will represent Antipolo City. She is a graduate of Communication Arts from La Salle College. This 5’7″ beauty is currently working as a Copywriter for a local beauty brand while doing church volunteer work as a Sunday school teacher. She is a product of the Kagandahang Flores Camp.

Binibining Pilipinas is her first major pageant and feels that being part of the 40 is really meant to be.

Welcome to the roster, Gillian! 🙂