MG may have lost Bb. Pilipinas 2013, but she will still compete abroad.

After a disappointing non-placement in Bb. Pilipinas 2013, Mercegrace Raquel seemed headed back to her normal life. But since Team JDV’s John de la Vega is the go-to-guy in the Philippines of the organizers of Miss Humanity International, she found herself in the spotlight again. While the Barbados-based competition lacks the prestige and huge following of other international beauty pageants, it remains solidly on track going into its 3rd edition.

And so, Mercegrace will soon follow the footsteps of Czarina Gatbonton (2011) and Ayelee Marie Dasalla (2012) who represented the country in the same and wound up in the Top 5. She could be looking at finally nailing the crown, given MHI’s propensity for dark, exotic beauties.

Once all her traveling documents and wardrobe are in order, she should still have enough time to condition herself for the competition’s crucial dates – July 7-15, 2013.

Bridgetown, watch out for Mercegrace! 🙂 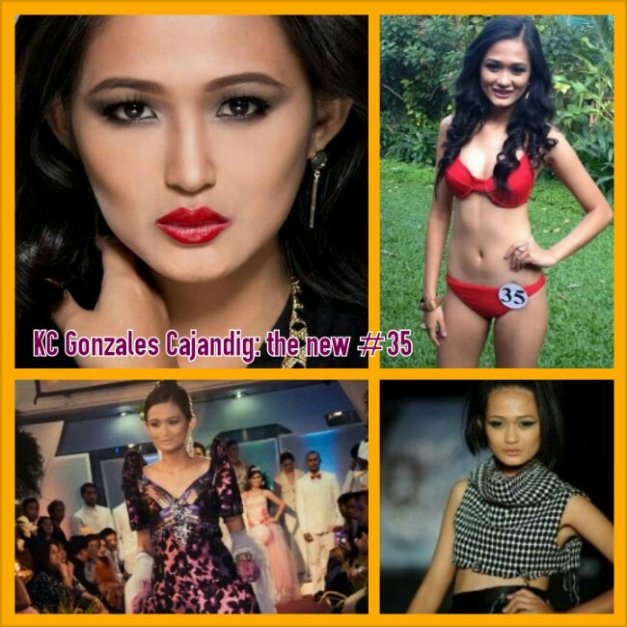 KC Gonzalez Cajandig is the replacement candidate for Theresa Fenger.

After Theresa Fenger (she formally backed out instead of getting disqualified) became Maxine Medina 2.0, here comes KC Gonzalez Cajandig (she’s all set to replace Theresa) taking on the tag of Ayelee Marie Dasalla 2.0.

Beauty pageants can be a lonely place for a candidate who started out in high spirits and prematurely ended her stint on a sour note. But that’s the way the heels and colorful swimsuits get stripped in Binibini once found guilty of violating something as “relatively mundane” as posing sexy in FHM.

Anyways, here’s a brief backgrounder on the replacement:

Hailing from General Santos City, KC was scouted for Bb. Pilipinas 2013 by fashion designer Jontie Martinez who now has two ladies in official contention (the other one being #22 Ellore Punzalan).

Having spent most of her work time gliding the runway, she was able to represent the Philippines in the World Supermodel of 2009 competition held in Taiwan, ROC. In the said modeling tilt, she emerged as one of the finalists, aside from copping the Miss Photogenic award. Prior to that, she took part in Ford Models’ Supermodel of the World Philippines 2008 where she placed in the Top 3.

Okay, troops, so what are your thoughts on KC? Or better yet, do you think that she has even a Chinaman’s chance to create ripples at this stage of the pre-pageant proceedings? Hard as it may seem to accept, being a replacement is as good as being a filler for stage blocking or making sure that the number of candidates remain 50 all the way to the finals. She wasn’t selected at the onset after all, so what remains is the honor of being part of BBP2013’s Golden Year. 😉

Rose Ann Razon: does Bataan have another winner in her?

Rose Anne Razon and Janine Tugonon share one thing in common – they both come from Bataan. The comparison stops there, though.

Rose Anne Razon is Miss Bataan 2012. This 5’8″ young lady is from the town of Dinalupihan. During the provincial finals, she defeated another familiar Binibini joiner – Ayelee Marie Dasalla. Does logic apply in this case? Is Ms. Razon easily deserving of an Official Candidate’s spot? Or is she merely promising but still unprepared for the big league?

Let’s wait if she will show up at Gateway within the next few days. 😉

Just as all of us were caught up with the marathon live stream of Miss International 2012, a smaller pageant was concluded last October 20 in Georgetown, Barbados when Lesa Gayle Wee Tom of Jamaica was crowned Miss Humanity International 2012. Our very own Ayelee Marie Dasalla was named 2nd Runner-Up and recipient of the People’s Choice Award. Other ladies in the Top 5 were the representatives of Guyana (1st Runner-Up), Netherlands (3rd Runner-Up) and Australia (4th Runner-Up). Kudos to Ayelee for matching the efforts of Czarina Gatbonton in the first edition last year! 😉

Fate always has something to keep Marie Molo Peter and Ayelee Marie Dasalla by each other’s side during beauty competitions. If you will recall, the two ladies were wearing numbers 11 and 12 – respectively – during Bb. Pilipinas 2012 last April. In the ongoing Miss Humanity International 2012 this time around, the two are also placed one after the other alphabetically with Fil-Norwegian Marie representing Norway and 100% Pinay Ayelee wearing the Philippine sash. It goes without saying that the duo bonded quite fast since they already shared time together in the past.

The question left to be answered is who between the two will come out more victorious in the finals of the Caribbean-based pageant come October 20? Well, the wait won’t be long. Let’s see if Norway or the Philippines or both will figure out well on Saturday night. 😉

Ayelee Marie Dasalla is all set to depart for Georgetown, Barbados to represent the country in Miss Humanity International 2012 where she will arrive this coming weekend. Prior to the formal send-off yesterday, John dela Vega’s team (including designer Poi Subijano) has made sure that she is 100% ready for the pageant in the Caribbean. From the time of her participation in Bb. Pilipinas last summer, she has lost more weight to come out sexier and more competitive. Our bet last year, Czarina Gatbonton, placed third. Will she place higher or possibly, bring home the crown itself? 🙂

The finals for Miss Humanity International 2012 is scheduled for October 20 at the Barbados Beach Club. In the meantime, show Ayelee some love and support by casting an online vote for her. Click HERE. Just when you thought you’ve seen the last of Ayelee Marie Dasalla, think again. This Bataan lass – who participated in Bb Pilipinas 2012 as a replacement for disqualified candidate Maxine Medina – has been appointed Philippine representative to the Miss Humanity International 2012 to be held in Bridgetown, Barbados on October 20. Her predecessor, Czarina Gatbonton, placed 2nd Runner-Up in the premier edition last year. And since both ladies come from the beauty camp of John dela Vega, it goes without saying that she will receive tremendous tips and advices on how to handle the competition in the Caribbean.

Ayelee has a good chance of improving on our 2011 placement because she is more solidly prepared for the same. And being the determined lady that she is (remember her story of being nearly obese at one stage in her life?), I think she will make her presence felt in Bridgetown. 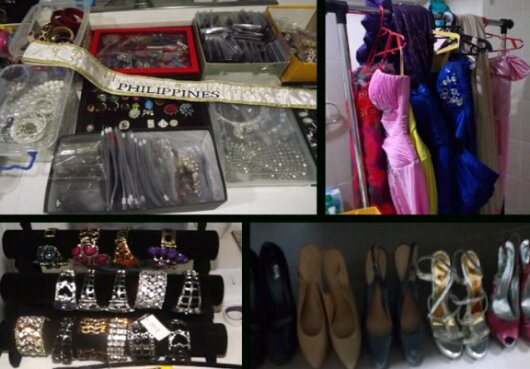 Ayelee won't be leaving for Barbados yet, but her armaments for the competition are ready as early as now!

This beauty contest may be small compared to others, but it certainly has a big heart. Its objectives are clear-cut and less complicated. Let’s support Ayelee in her quest!