Poll Results: Who do you want to win Bb. Pilipinas-Universe 2011?

After votes were casted for my unofficial poll started last March 20, 2011, here are the final results. I decided to close the voting yesterday morning to give way for the tally to be posted before the finals night this coming Sunday, April 10).

Based on the 1,383 votes casted, here are the 15 ladies with the highest numbers (with corresponding percentages). Of course, it goes without saying the #1 on the list is your choice to win the top crown:

Shamcey Supsup - my blog readers' choice to win Bb. Pilipinas-Universe after garnering 15.62% of the votes.

My readers (and visitors) have spoken. Let’s see if this outcome will parallel the actual results on Sunday. 😉

The pressure is on Kathleen ‘Cai’ Subijano. Being the younger sister of Bb. Pilipinas-World 1994 Cara Subijano, she is expected to figure out well during the finals of Bb. Pilipinas 2011 on April 10, Sunday night. If she won’t pass muster as one of the titleholders, will she at least make the semifinal cut and show to everyone her gift of gab during the Q&A? I think she will.

Kathleen Subijano during the Bb. Pilipinas 2011 Primer in a serpentina Filipiniana creation.

Actually, I have this pretty chinita on my shortlist. And if she surpasses my ‘stricter-than-usual’ expectations, then I would warmly congratulate her. My friend, former radio DJ Issa Perez de Tagle – who happens to be a close pal of Cai – should jump for joy if a victory lands on the lap of Candidate #30.

Right now, all we can do is wait with bated breath and keep our fingers crossed.

Know a bit more about Luzelle Felipe, the “tricycle girl” of Bb. Pilipinas 2011

Luzelle Felipe is the so-called “tricycle girl” of Bb. Pilipinas 2011 because there was a point in her young life when she actually worked part-time as a tricycle driver in her province of Malolos, Bulacan just to earn some extra income. Nothing wrong with that, I reckon. In fact, it adds some color to her background, albeit straight Tagalog-speaking she is all the time. Watch the video below and try to see if she is still raw or if she may just surprise pageant followers with a semifinal appearance on the coronation night come April 10. Many thanks to OPMB Worldwide for the video.

A quick one-on-one with Shamcey Supsup 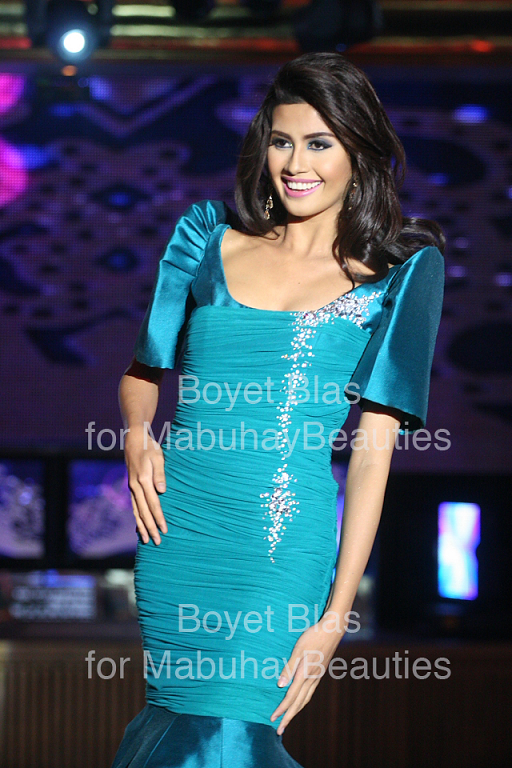 For Shamcey Supsup fans and supporters, plus the remaining doubting Thomases and curious lurkers who have their reservations about the girl who is now a hot favorite for one of two Bb. Pilipinas 2011 crowns, here’s a brief tete-a-tete with her. Many thanks to OPMB Worldwide for the video.

Just last Sunday afternoon, the 40 Official Candidates of Bb. Pilipinas 2011 paraded around the Araneta Center area while seated on top of convertibles that drove them for all the onlookers to see in the flesh. Of course, this annual tradition won’t be complete without the tacky headresses they were made to wear while in their blue swimwears. See for yourself and tell me which delegate stood effortlessly out. Many thanks to Jory Rivera and Melvin Sia of OPMB Worldwide for these shots. 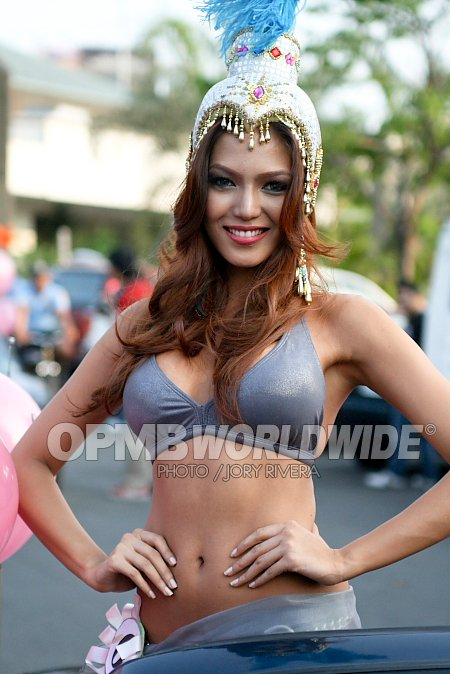 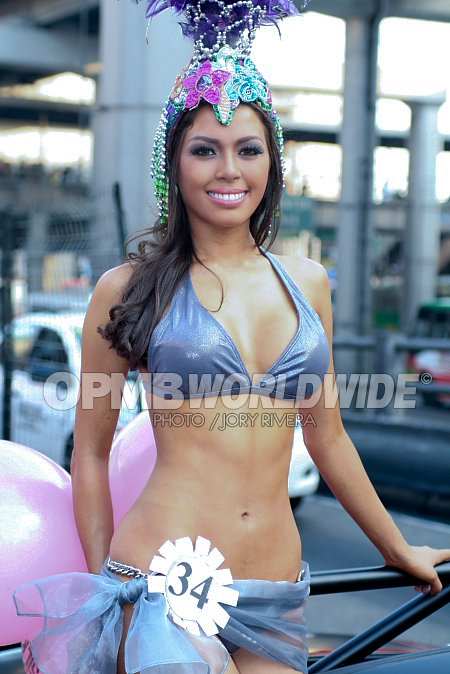 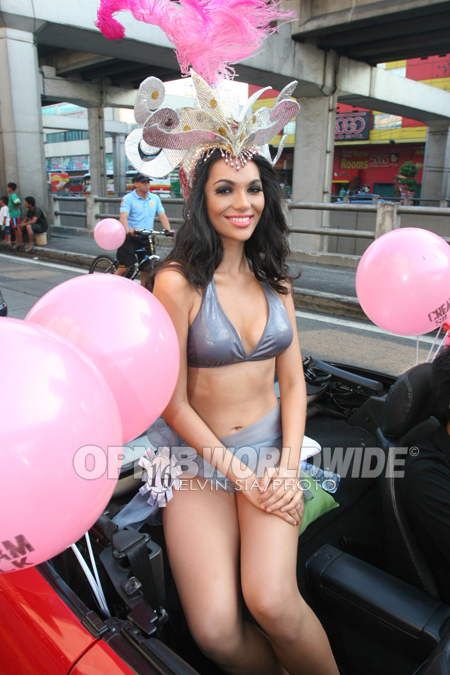 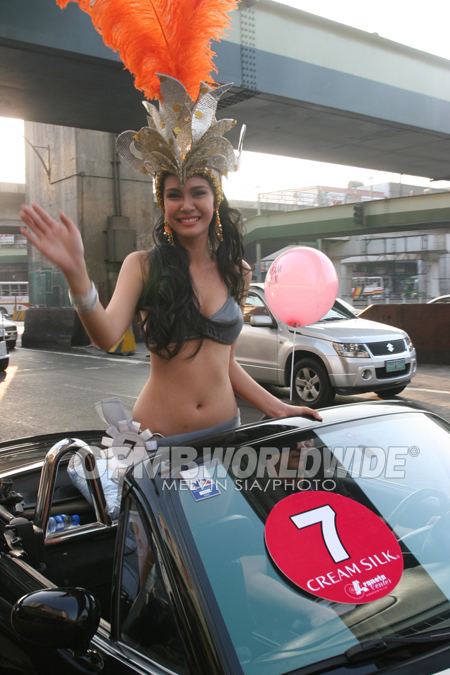 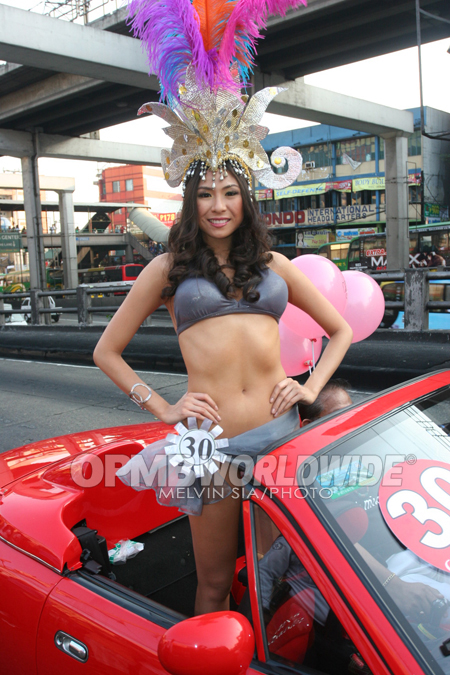 Watch “The Road to the Crown: The Bb. Pilipinas 2011 Primer” tonight! 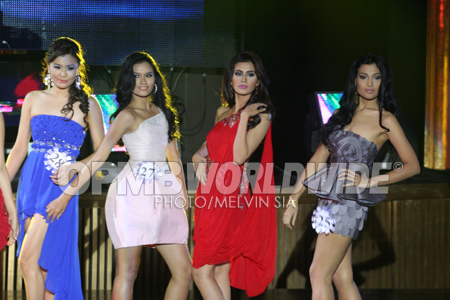 Tonight on ABS-CBN’s Sunday’s Best, watch the primer of Bb. Pilipinas 2011 titled “The Road to the Crown”. Read the press release, courtesy of OPMB Worldwide:

The countdown to the crown continues as Bb. Pilipinas 2011 airs its Pageant Primer on April 3 at ABS-CBN.

Entitled “The Road to the Crown”, the pre-pageant party was held at the posh Republiq at Resorts World and was an exclusive “by invitation” affair for the pageant’s directors, VIPs and corporate sponsors.

A highlight of the event, hosted by Borgy and TJ Manotoc along with Ms. Universe Philippines Venus Raj, was the parade of the forty official candidates as they donned their stylized Filipiniana gowns designed by different leading designers of the country.

“The Road to the Crown” also features the activities that the girls have been engaged in since they passed the initial screenings. These include the fashion show at the Gateway Mall, talent competition at the New Ali Mall, charity and outreach visits to CRIBS and other institutions, fashion and beauty workshops conducted by Bb. Pilipinas former queen turned stylist and beauty coach Nina Ricci Alagao, and the television commercial shoot for Cream Silk among others. The pageant’s media partner, ABS-CBN also unveiled to the evening’s captivated audience the finished products of a glossy photo shoot conducted by Nicolo Cosme. BPCI and Cumbia provided the outfits and accessories.

Among the guests who graced the party were BPCI’s Stella Marquez Araneta and the BPCI executive board, current and past Bb. Pilipinas beauty titlists incuding Ms. Universe Philippines Venus Raj and representatives from the pageant’s corporate sponsors that include Unilever’s Cream Silk, Megaworld Corporation, Philippine Airlines and Hotel Sofitel.

On April 3, the Bb. Pilipinas 2011 candidates along with the current Bb. Pilipinas queens will participate in a grand Parade of Beauties around the Araneta Center. The Grand Coronation Night will be held at the Big Dome on April 10 and aired live on ABS-CBN. Bb. Pilipinas 2011’s corporate partners are Cream Silk, Megaworld Corporation, Philippine Airlines and Hotel Sofitel. Tickets to the pageant’s coronation night are available through Ticketnet at 911-5555.

Filipiniana becomes Bb. Pilipinas 2011 and how!

During the recently-concluded Bb. Pilipinas 2011 Primer at the Republiq of Resorts World Manila, the 40 Official Candidates of the pageant paraded in Filipiniana attires that evoked elegance and sophistication.

The good news (hopefully this gets to be confirmed as true and no more change of heart from BPCI) is that the winner of Best in National Costume will have her piece worn by whoever wins Bb. Pilipinas-Universe 2011 in Sao Paolo, Brazil. I’m keeping my fingers crossed! 😉 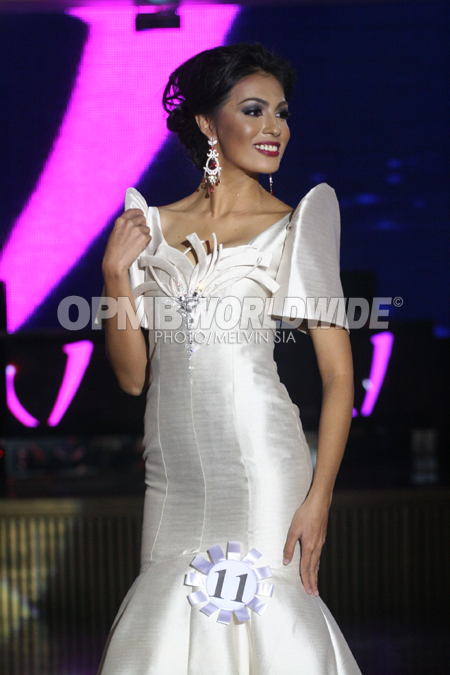 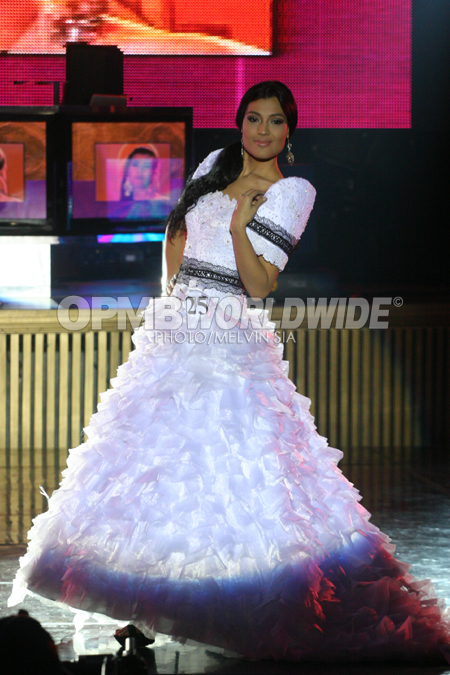 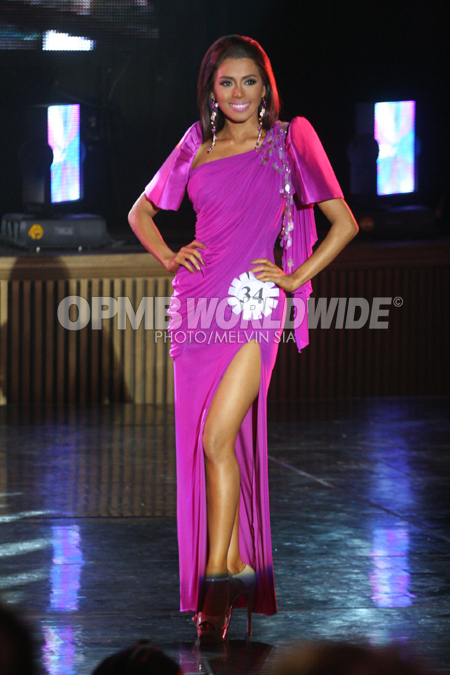 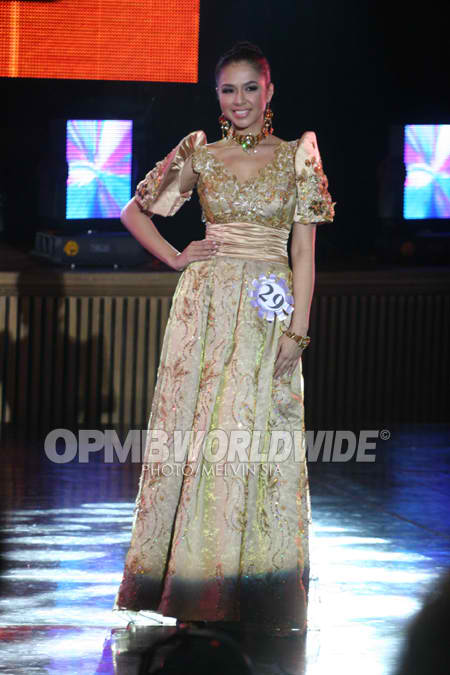 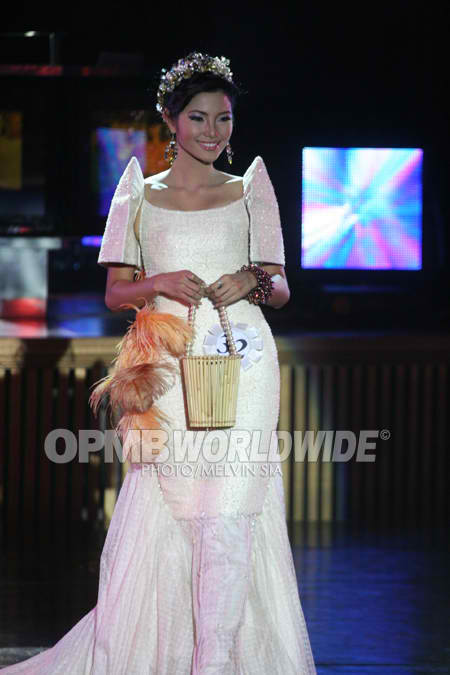 and the winner of Best in National Costume is……

Back view of the winning National Costume...I like it!

It’s April Fool’s Day and I kid you not. Here are new swimsuit images of some Bb. Pilipinas 2011 Official Candidates for your viewing pleasure. 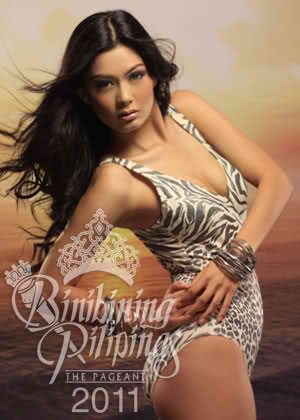 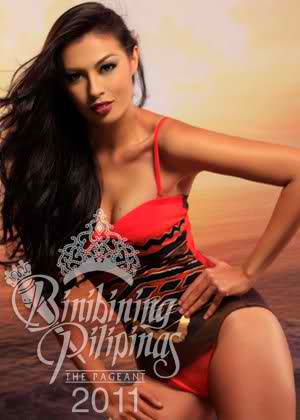 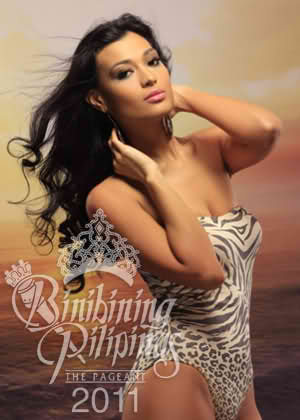 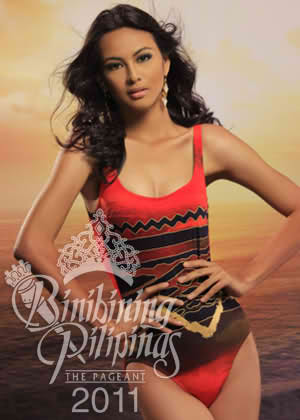 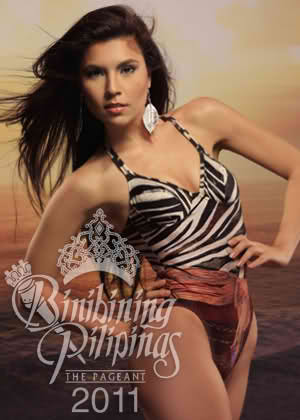 Who is most consistent so far? Who strikes you as the real winner? 😉

VOTE for the People’s Choice for the Face of Binibining Pilipinas 2011!

You can help one girl win the People’s Choice Award for the Face of Binibining Pilipinas 2011 by doing the following:

Once more, here’s how to cast your vote:

A trio of outstanding queens will host Bb. Pilipinas 2011

Come April 10’s coronation night of Bb. Pilipinas 2011, three beautiful Filipinas – all of whom made their marks in their international pageant participations – will host the national finals. First of the troika is Bb. Pilipinas-Universe 1994 Charlene Gonzalez who represented us when the Philippines hosted Miss Universe 1994 (won by Sushmita Sen of India) and placed in the Top 6. And then there is Bb. Pilipinas-Universe 1999 Miriam Quiambao who almost made history when she landed 1st Runner-Up to Miss Universe 1999 Mpule Kwelagobe of Botswana in Trinidad & Tobago. Completing the list is the most victorious of Bb. Pilipinas winners in recent years, i.e., Miss International 2005 Precious Lara Quigaman, who has already made peace with BPCI Head Stella Marquez de Araneta after putting up a separate competition (Miss Turismo Pilipina) which produced only one winner (Sherilyn Sustiguer) and folded afterwards.

This early, many people are saying that this year’s edition will be the grandest of all – not only because ABS-CBN is the new home of Bb. Pilipinas but to further strengthen its hold as the premier beauty pageant of the country after losing the Miss World franchise which will hold a Miss World Philippines 2011 finals come August over at GMA-7 which, according to rumors, might be hosted by Miss World 1993 2nd Princess Ruffa Gutierrez.