Miss Universe Philippines 2021: Who Will Survive?

Note: The article below is the same one I submitted to Rappler Entertainment. 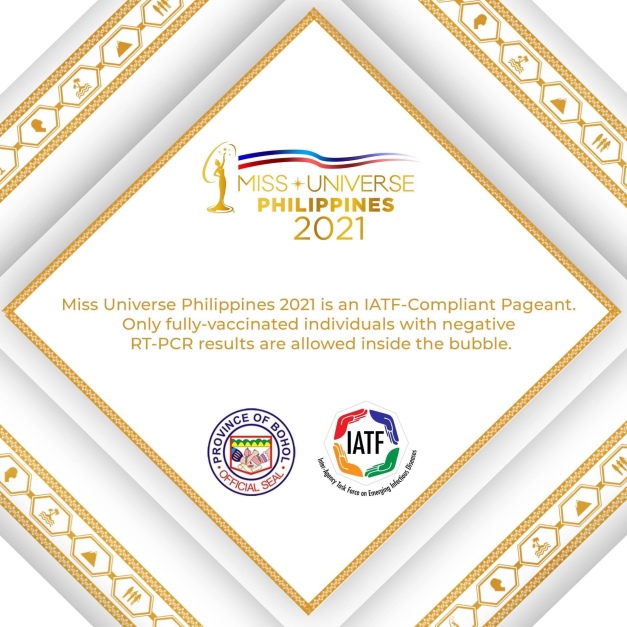 This year’s edition of Miss Universe Philippines is something akin to a survival drama of a beauty pageant that can be loosely compared to the Netflix hit series “The Squid Game” where the original participants were gradually eliminated through a series of games (read: virtual challenges and physical tasks conducted inside a bubble) en route to determining only one winner who will take it all in the end. 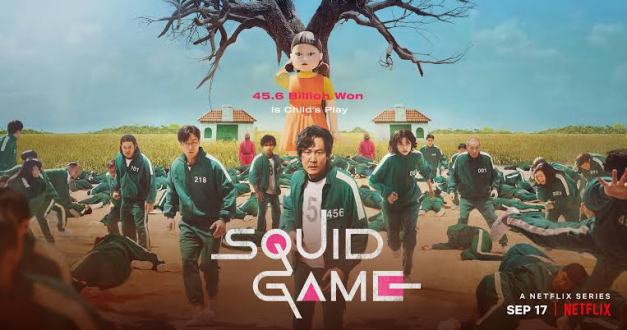 At the onset, the 100 Official Delegates were like going through a “Red Light, Green Light” race where only the Top 75 were deemed qualified to reach the determining marker that would signal another round of play in the second stage. 25 aspirants fell by the wayside in the process.

And when it was “Sugar Honeycomb” time, the ladies have to decide which route will make it easy for them to pass through the eye of a needle. The ones who were smart enough to trust their gut-feel went for easy “triangles” (or fan votes), while the rest chose “circles”, “stars” and the difficult “umbrellas” (pure judgment from the organizers) just like in the said series. When it was time to carve their own fate in the competition, only fifty (50) pushed themselves forward to live for another few days or more.

At this point, the battle is now becoming a tug-of-war between the neophytes and the experienced pageant joiners. Who are measuring up to the efforts of the front-runners? And who remained middling – relying mostly on popularity votes that would save them from getting wiped out before the most important cut of all? Pageant fans and supporters scrambled to save their bets up to the last minute. On the other hand, the delegates whose popularity reach are not strong prayed hard that they have done enough to level up.

Only thirty (30) from the original roster remained standing after pulling the long end of the rope to their side. These finalists – a good mix of familiar and unfamiliar faces – moved on to the more exciting parts of the journey – riding the bus to Clark, staying at the Hilton Clark Sun Valley Resort, coming together physically to meet their opponents face-to-face, doing endless sponsor shoots, walking the runway and getting grilled for the crucial Preliminaries en route to flying to Bohol for the final leg of the big event.

Twenty-eight Finalists – nett of the two ladies (Joanna Rabe of Zambales and Ybonne Ortega of Davao City) who had to withdraw for health and/or COVID-related reasons – are now billeted at the paradise-like Henann Resort Alona Beach in Panglao Island where they excitedly await the much-anticipated denouement of it all.

Top 16
Who will go for all the marbles? 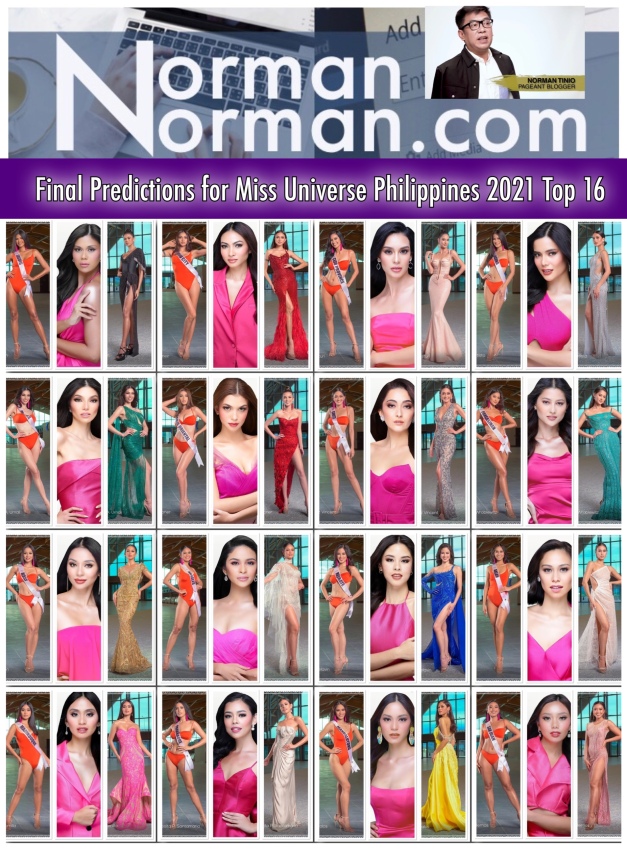 The ultimate format will take on a 16-10-5 contest template before Miss Universe Philippines 2021 gets to be crowned by Rabiya Mateo this coming September 30. So without further ado, my final forecast for the Top 16 are listed as follows:

This writer came up with the names above based on a combination of their performances during the Pre-recorded Preliminaries, various social media guestings, virtual challenges (including the Tourism videos plus interviews) and a personal assessment on their chances of doing well during the enhanced Finals at the Henann Resort Convention Center.

From where the armchair judging begins, it won’t require a lot of thinking to determine who are likely to enter the Top 10. Based on how they delivered in the Preliminary Competition, the ten ladies ranked highest should make the cast after the Swimsuit and Evening Gown portions. And from this smaller group, the casual interviews are likely to produce the ones in the upper tier and otherwise.

Top 5
The Glass Bridge to Victory

With some jitters, my Top 5 who will attempt to cross the final hurdle towards the crown are:

The tougher question-and-answer segment should take centerstage at this point. And this is where presence of mind and nerves of steel will be of utmost importance. Predictions are open to an assortment of combinations. And whoever nails her answer/s (something that even this writer cannot accurately guess or read inside a crystal ball) with the sublime confidence of a winner will be crowned as Miss Universe Philippines 2021.

The judges will do their final rankings (and a possible deliberation on who really deserves to finish on top) and decide on the ones to fill up the runner-up positions and who will actually wear the now-iconic “Filipina” crown. She is the one who will prepare for the bigger mission in the resort town of Eilat in Israel where the 70th Miss Universe will be chosen this coming December.

And finally…
Who will cross the finish line first? 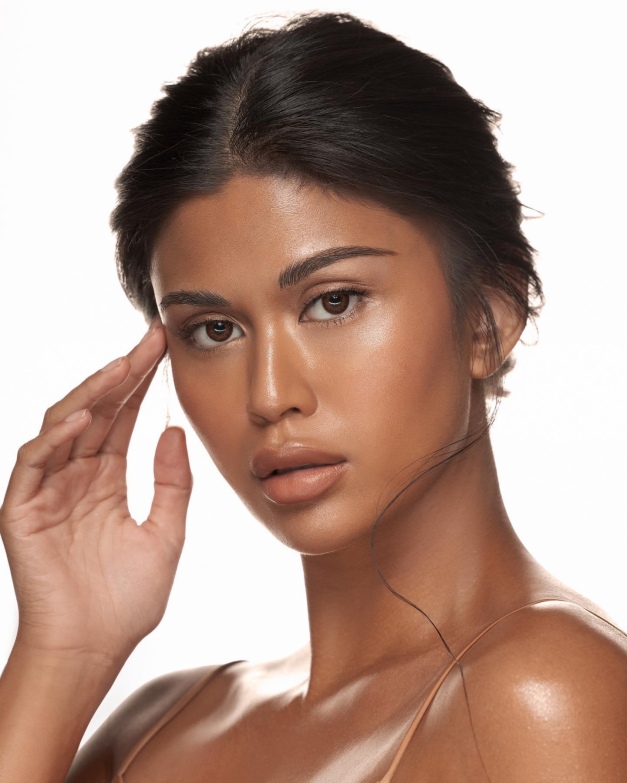 Wrapping-up, Katrina Jayne Dimaranan of Taguig is the complete package. She’s tall, smart, with beautiful morena looks, sexy body, and an engaging personality. While she may not be close to perfect in the eyes of some, this 28 year-old has shown what wonders prior experience and training in both the national and international levels can do to a contender’s game plan. If she regrettably falters when it matters most, then one of the two highly-regarded Cebuanas – the openly gay Beatrice Luigi Gomez of Cebu City or the well-loved Steffi Rose Aberasturi of Cebu Province – can steal the limelight. Still, I am hoping for a welcome surprise from either Leren Mae Bautista of Laguna or Izabella Jasmine Umali of Manila even when the going gets resistant to their efforts. Making it to the Top 5, though, is no mean achievement.

Miss Universe Philippines 2021 will be the first national beauty pageant winner in the Philippines to actually go through a new hybrid of virtual and physical competitions. And she is bound to carry the hashtagged branding of the organization – #phenomenalwoman and #InspireYou – all throughout her reign.

88 comments on “Miss Universe Philippines 2021: Who Will Survive?”