While the COVID-19 pandemic continues to rear its ugly head everywhere, we here in the pageant world remain to be temporarily unmindful of what’s happening in all the affected countries. After all, Miss Universe is and will always be a mandate – a perpetual excuse to make ourselves busy with an all-time favorite even just for a short period of competition.

The 69th Miss Universe in Hollywood, Florida is about to end in less than 24 hours with the crowning of a new winner. Who would have thought that the ladies checked-in only last May 6? The activities are so tight that enjoying the amenities at Seminole Hard Rock Hotel & Casino is but a dream that can only be enjoyed visually or at least during the photoshoots. Perhaps, the ladies made the most of whatever sleeping time they were afforded inside the well-appointed rooms.

So with that in mind, allow me to share my forecast for the finals. The photo grid above contains the photos of the ladies I feel would make it to Top 20 based on the Preliminaries – plus a wide assortment of videos, interviews and socmed posts to make up for the lack of virtual knowledge about the closed door sessions with the selection committee. I will just add the 21st – or the online voting winner – in the list below which I ranked accordingly and with a lot of moving back and forth in the process:

It only makes sense for me that the ten ladies I scored the highest during the Swimsuit Preliminaries would move forward to my Top 10. That would be a pretty good basis for this list since the Top 21 will only compete in the Ema Savahl swimwear. And they are

With Miss Philippines Rabiya Mateo wearing the “pasabog” finals evening gown of Furne Amato, gut-feel is telling me that she will rise up in the rankings (keep in mind that I ranked her only 9th in this prelim segment) and make it to the Top 5, along with the four other ladies with the highest placements in my personal assessment of the Evening Gown Preliminaries:

Now this is where the going gets tough. Q&A will enter the picture at this juncture so you really can’t tell what answers they will give or if they will get a question or topic that sits well with the multitude of things running inside their heads.

I sincerely want to see Amanda Obdam of Thailand making it to the Final 3 (and avoid memories of Top 5/6 performances back in 2016, 2017 and 2019 when Thai bets would usually come to a grinding halt at this point) along with Adline Castelino of India and Rabiya Mateo of the Philippines. But there is a certainty that at least one Latina will grab a spot in the troika of top finishers. Hence, my Final 3 is made up of:

This is a trio of strong speakers – with different styles of communication in place for each one of them. 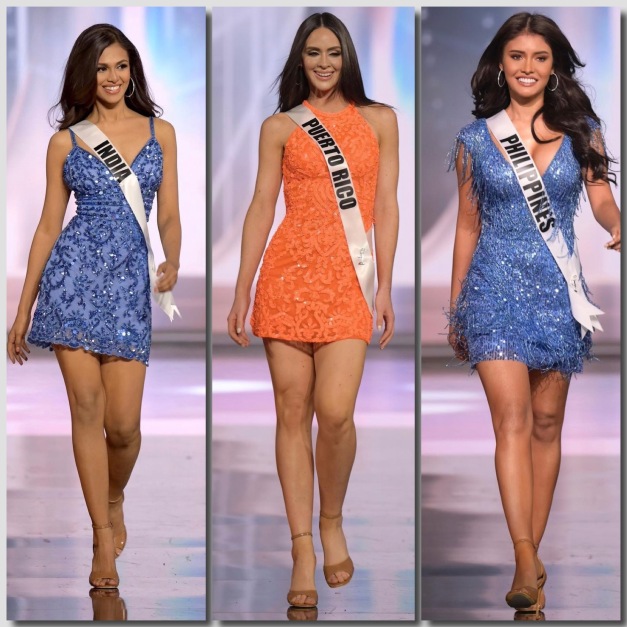 I would be pleased with Rabiya getting 2nd Runner-Up – a placement that has eluded the Philippines ever since the first time we joined the annual pageant. But should she deliver a most impressive answer or speech, then who are we to deny a higher ranking? I see her as 1st Runner-Up and one of last two women standing.

So will it be a fifth crown for the Philippines or a sixth for Puerto Rico? A Latina will most likely be favored by the MUO (given that two Asians, two Africans and one European were crowned in the last five editions) – provided that she unquestionably nails this part.

If Estefania Soto* plays her cards right, she is likely to be the 69th Miss Universe in my opinion. I know she can connect to people in high places given her background as well as take the role of a big sister to pageant fans and aspiring beauty queens be it on social media or in person.

* – If 29 year-old Estefania wins, she will take over MU1997 Brook Lee as the oldest to be crowned as Miss Universe.

61 comments on “normannorman.com’s Predictions for the 69th Miss Universe”