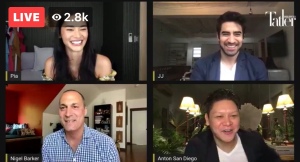 This was uploaded to the Youtube channel of the said publication.

4 comments on “Tatler Talks with Jeremy, Pia, Nigel and Anton”