The National Costume of Thailand for Miss Universe 2019 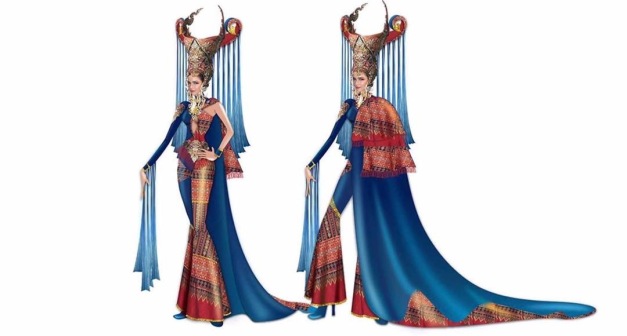 Thailand’s National Costumes for Miss Universe have always been anticipated every year. And for the next edition, Miss Universe Thailand 2019 Paweensuda Drouin will be wearing something inspired from the following:

Phi Ta Khon Festival is the unique Thai tradition of Loei province. The original belief of the festival is traditionally ascribed to a story of Vessantara and Maddi when they left the woods and went back to the city. Ghosts and animals in the woods missed them so much that they disguise as local people to see them off to the city. This tradition happened since then and has been passed on until the present time.

Bun Luang and Phi Ta Khon Festival is a part of “Bun Luang event” which is considered a big merit making event of the year. It is the combination of Vessantara merit making (the fourth month) and the Rocket Festival (the sixth month) to be one event. Vessantara merit making is organized for people to listen to the 13 stories of the last great incarnation of the Buddha. It is believed that the merit is so great that it can make you meet Mettreya (the next Buddha) in your next life.

The Rocket Festival is organized to pay respect to city God Shrine and it is also considered as the tradition to bring rain for the season.

In this event there will be a parade of Phi Ta Khon (Ghost Mask) both of the small and big groups dancing and moving around the parade which creates fun and entertainment to the event.

The interesting activities of Bun Luang traditional event and Phi Ta Khon festival are inviting protection from Phra U-pakut, the spirit of the Mun river, blessing ceremony, the parades, inviting Vessantara into town, getting rid of Phi Ta Khon masks, listening to 13 stories of the last great incarnation of the Buddha.

Apart from that there are shows on the stage, the local products for sale, handmade, handicraft, art and idea products created by Dan Sai and Loei local people.