Karen “Braveheart” Ibasco: On the day she will crown her Miss Earth successor 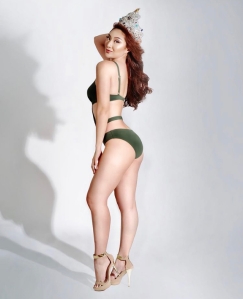 She stood up against the odds without flinching.

Miss Earth 2017 Karen Ibasco is a braveheart – someone who was called (make that crowned) to action, who stepped out in courage, and who followed through to completion the task she has been called to do or become.

As Miss Earth 2017, she faced one of the most mud-slinged reigns in modern international pageant history. Blame it on the common perception of physical beauty by many fans, supporters and followers from other countries who could not accept her inclusion in their idea of a deserving winner. Heck, even some of her fellow Filipinos joined in the fray and threw their own bushels of tomatoes in dismay. It also didn’t help that the competition was held here in the Philippines where a hometown decision is sure to be met with more than quizzical looks.

And so, she was faced with ferocious resistance the night the crown was placed on top of her head. The most unpleasant shots spread like wildfire on social media, just like the hurtful memes that bruised her feelings like nonstop jabs from an unseen class of opponents.

But Karen is not one to be cowered by such below-the-belt attacks. She remained undaunted, and took the queenly path instead – keeping her cool/composure every step of the way.

And more than midway through her year of reign, the hits gradually grew silent and acceptance crept in a painfully slow manner. It didn’t matter. She continued to hold her head up high.

And now that she is about to crown her successor tonight, Karen can look back to all the painful moments she had surpassed. And give out a generous smile. Because true to her title, she is one of the most down-to-Earth Queens I have ever met. She fulfilled (and continues to fulfill) her responsibilities with clockwork precision, while preserving the pageant brand she was tasked to sustain and strengthen.

Karen “Braveheart” Ibasco. Move on with an even braver heart. Continue to be an inspiration to many. And keep up with the efforts in making our Earth a most environmentally safe place to live in.

11 comments on “Karen “Braveheart” Ibasco: On the day she will crown her Miss Earth successor”