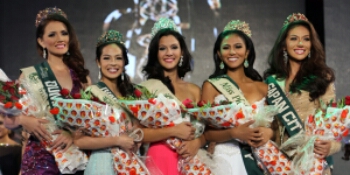 Jamie (center) during her victory as MPE2014 last year

It has been a truly eventful year for 20 year-old Jamie Herrell.

When she decided to sign up for Miss Philippines Earth 2014, this beautiful Cebuana was always expressive of her desire to win the crown, citing that it is the one title she has been targetting in her fruitful pageant career. And she did (left photo). Aside from being picked as the top favorite, she made sure of living up to the hype and giving everyone excellent performances all throughout. From that point, she steadily cruised her way to wearing the Philippine sash in Miss Earth 2014. While her road in the international competition was relatively more bumpy and stressful, she still managed to maintain her calm and composure, earned the following of many pageant fans and ultimately became the country’s only Big 4* winner last year.

Jamie remains sweet and charming inspite of the double-tiered pageant celebrity status. And now that she is nearly reaching full circle as Miss Philippines Earth 2014 with the crowning of her successor tonight, allow me to give her my heartfelt thanks for a wonderful reign. There couldn’t have been a more deserving advocate of Mother Earth, and she deserves all the blessings coming her way.

Let us now reminisce on her win during MPE2014 by watching the full video of last year’s finals.