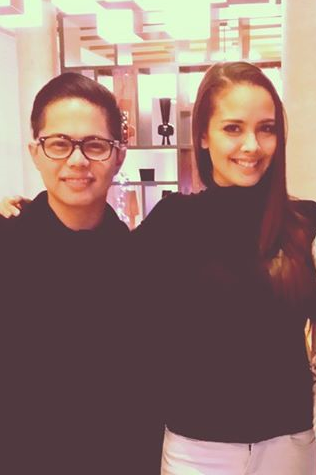 What Caloy Buendia is to Miss Philippines Valerie Weigmann right now is what Mark Besana was to Miss World Philippines 2013 and Miss World 2013 Megan Young. Official handler, that is.

You see, when Megan was still preparing for the national finals last year, it was Mark Besana who took care of all the nitty-gritty details and served as friend/confidante/assistant and all-around cheerer. So during that victorious night in Bali, it was Bessie (Mark’s nick to all friends and close associates) who screamed the loudest inside the venue.

But barely six months into the reign of Miss World 2013, Bessie had to leave his responsibilities at Aces & Queens to assume a Hong Kong-based job. But not before making an ultimate promise to go to wherever Megan will relinquish her crown.

True enough, the former handler is now in London and reunited with the reigning Miss World. And for the past couple of days, they have been bonding like long-lost brother and sister.

Carry on, Bessie and Miss World 2013! Enjoy the moments of togetherness in the English capital. I’m sincerely happy that the two of you are in it before the finals on December 14. 😉

10 comments on “Reunited: Megan and Mark”